For most of us nowadays, the world is a fairly accessible place, cheap deals on flights and accommodation, thanks largely to online competition, as well as the massive growth in the information available to anyone with an internet connection, means more of us are seeing more of the world than ever before.  As long as you have a job and can save a little money each month, you can fund that once-in-a-lifetime backpacking experience to South East Asia, India, South America, Africa… the list goes on!

Unfortunately, though, all good things must come to an end. You’ve had your fun, escaped the ‘real world’ for a year or two and now it’s time to get back to reality: build a career, buy a car, get married, buy a house, but babies in the house (Your own preferably.  Don’t steal babies!) So that’s it – work and invest and raise miniature versions of yourself and do all of the things that you’re supposed to do up until retirement age.  If you’ve looked after your health then you can get straight back to having fun again.  Go wild!  Grow your vegetables; play golf; join some kind of committee; maybe go on nudist holidays when nobody you know is looking.  It’s gonna be crazy!

But what if you don’t want to wait until the age of 65 to enjoy all these wonders that life has to offer?  What if you want to join the naked-vegetable-golf committee right now?!  Well, you know what, you can!

There are many ways that you can fund a life of continuous travel and if you’re prepared to stay somewhere longer, actually build up savings as well!

Firstly, here’s everything we’ve done to earn money since leaving our jobs and up until leaving Vietnam.  (In Part 2 we’ll show you more ways you can keep traveling and earn money while you do it!)

Here’s our story: Jon is from the United Kingdom and I’m from the Philippines.  We both have completely different cultural, work, and financial backgrounds.

Jon had already been saving for 6 months before he quit his job in the UK and flew to South East Asia.  His savings only lasted for 3 months though, as he did a motorbike trip through Cambodia, Thailand, Laos, and Vietnam; which used up most of his traveling funds.

In my case, my traveling funds came from the last 3 paychecks I received while working in Kurdistan, Iraq. I quit my job and initially planned to travel for 3 to 6 months, one month of which was with my younger siblings.  I paid for everything, which put quite a dent in my finances as well!

When I decided to follow Jon to Hanoi, Vietnam, he had already found a job, a house, and had 2 motorbikes but his bank savings were suffering.  By that time I had been traveling for 3 months and still had enough savings, from working in Kuwait and Iraq, to survive for a month or two; however, I didn’t intend to touch them as they were invested in my mutual funds in the Philippines.

Now for the important stuff – How we managed to save and sustain our finances in Hanoi, Vietnam upon choosing this long-term traveling lifestyle.

As posted in Memories of Hanoi, by teaching English we earned from $19 to $25. Jon, having a TEFL Certificate (from the UK) and being a Native English speaker, though without teaching experience, was able to get a 6-month contract with a private language school.  This paid a monthly salary of $1600 to $1800, depending on his working hours, with an extra contract bonus.  He also took on some extra classes and private students to earn extra cash.

In my case, as a non-native speaker without experience or a TEFL certificate, it took me 3 months to find my first teaching gig.  My first job paid me $17/class (1 hour and 30 minutes) but I had a sure 30-class course over almost 2 months which paid me at the end of the course. After that, I was able to get a job through a private agency that sends teachers to rural areas in Hanoi, getting paid $20/hour for 10 hours every weekend and $25/hour for 5 hours on Tuesday and Thursday. This teaching job delivered me weekly, so we used this money for our monthly bills while Jon’s monthly salary went straight to our 2014 Travel fund!

Also, there were times that some centers needed a teacher to cover a class that they advertised in TNH or Hanoi Massive.  I once covered a short class for a week, paying $200! They wanted me to work longer but I couldn’t commit knowing that we planned to go traveling.
Related Article: Looking for affordable accommodation? Check out our Ultimate List of Best Hostels around the World.

Since we had a high savings target, we had to work more hours to earn more money.  But teaching can be exhausting at times. Luckily though, through an advert on Facebook, Jon was able to get an editing job in an office where his job was to back-check and proofread emails.  At $20/hour and 10hrs/week, it was exactly the boost we needed!

I was able to get a job at this western-franchised company for children, which I was very sad to leave but I had to.  I developed marketing plans, organized open house events, and pricing strategies, and taught baby yoga to kids.  This job only paid me $10/hour but I had a fixed 80 hours per month (or $800/ month salary.)  I sometimes worked at night, on weekdays, or bulk hours on the weekend!  My sister even spent Valentine’s Day with me in the office since I had to work from 9 am to 9 pm!

These are my favorite, our private classes. Jon was able to get a private class teaching 5 cute Vietnamese kids in their house where he was paid $20/hour and was teaching them twice a week (1hr and 30 minutes per session).  I had two adult private classes.  I was tutoring my first student three times a week on how to pass her Canadian Immigration interview and she paid me $25/class while my other lovely student was working for the government and just wanted me to practice with her and improve her business English.  She also paid me $25/per class, 3 times a week! 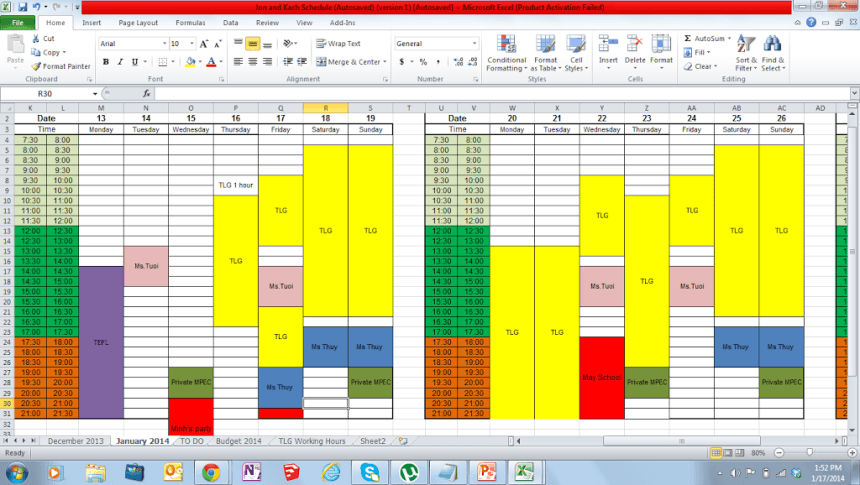 In our last 3 months in Hanoi, Jon and I weren’t able to see each other as much as before, because our schedule was fully jam-packed with work.  I also had to learn how to drive a motorbike in Hanoi traffic for work, but it was all worth it, we left Hanoi with enough money by just living there and enjoying life for 7 months (9 months for Jon!) but saving for only the last 6 months!

As a couple, you will both know and learn each other’s spending habits by living together.  In our first month of living together, Jon and I were paying for our food, drinks, etc. (completely different from the Filipino culture!)  This changed once we started making longer-term plans together and we began to share all of our income and expenses; from food to bills and partying.

After understanding each spending habit, we both noticed that we wouldn’t be able to save any money without tracking our expenses.  Between the two of us and with me having an Economics degree, Jon and I agreed that I should handle the budgeting.  Whenever we got paid, I would separate the cash into 5 red envelopes for our savings and expenses: Cost of Living, Emergency Fund, Flights budget, Leisure and Travel Fund. 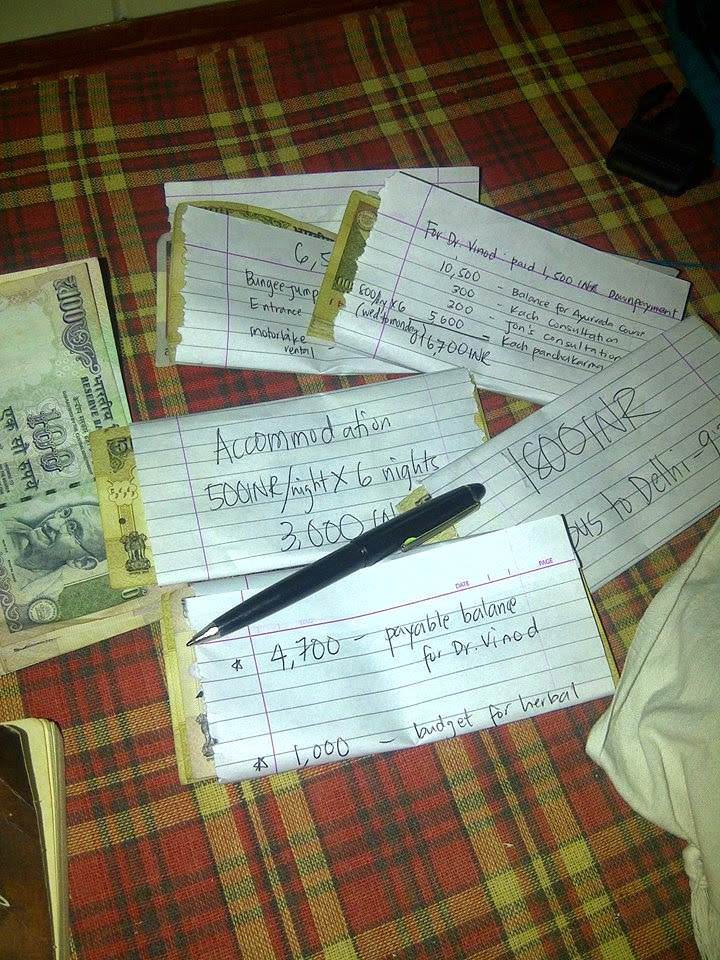 3. Set a Goal and Target

We had a monthly target of travel funds to achieve.  I wrote it on the wall and we can see it upon waking up in the morning. We tried to live smartly and sometimes frugally.  Whilst saving and with both of us working, we were able to travel to North Vietnam, a week in Laos, a holiday trip in Ha Long Bay, and a Christmas stay-cation in a 5-star hotel but we were able to leave Hanoi with travel funds to sustain our trip to South America!
For how to sustain your budget and even earn money from traveling itself, check out Part 2!

10 Best Things To Do in Zakynthos, Greece [with Suggested Tours]

Random Thoughts Of A Couple Who Travels