Cappadocia is one of several quintessential postcard images that explode onto your screen when you type ‘Turkey’ into a search engine in search of places to explore in this ancient and mystic country. 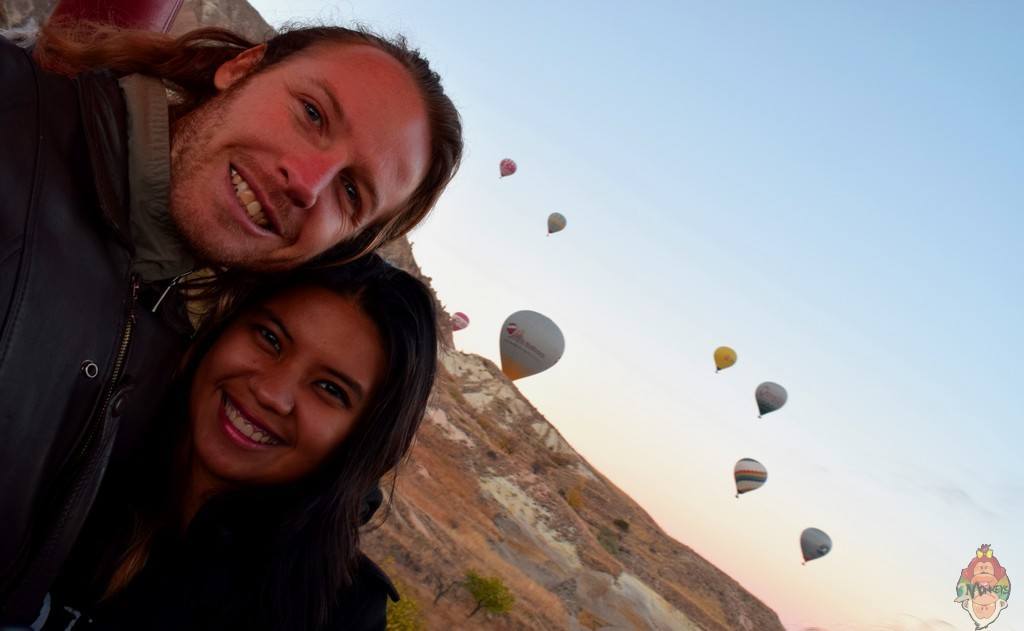 As we landed in Kayseri Erkilet Airport and the plane doors opened, the chilled air and rocky, desert-like landscape told us we were far from the comforts of Istanbul, or the warm, salty breeze of the coast. The people looked different; their faces a little more weathered by the harsher environment, their eyes softer with a warmer gaze, their movements, and manner smoother and gentler than that of the city folk.

The shuttle took us from the airport to our hotel in the town of Avanos, a quieter town just a few minutes’ drive from the tourist center of Goreme, where most of the cave hotels and tour agencies are located. 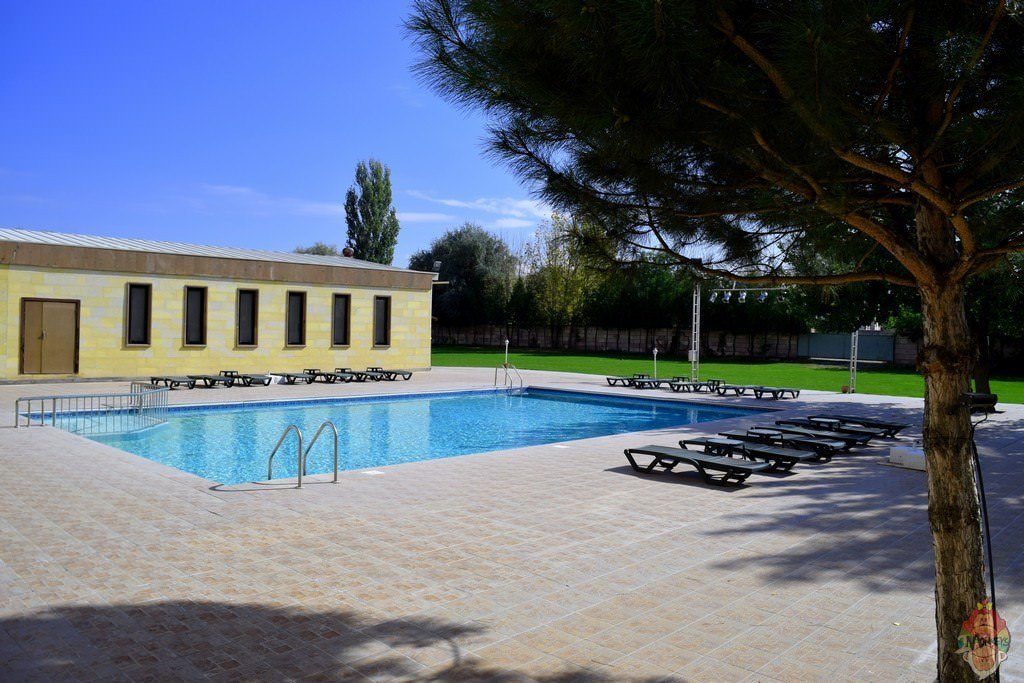 Altinyazi Hotel is a large, 4-star hotel on the edge of Avanos, with a big swimming pool and everything you need for a comfortable stay in between hiking around in the desert. We had the suite, with a big double bed and separate lounge area. While it’s certainly not a new hotel, it’s looked after and maintained immaculately well. The manager, Ms. Demet, welcomed us and showed us around, even organizing our night time Turkish Show at Uranos, the best Turkish cave show in the area! As well as local food and wine, there were several hours of traditional music, dancing, and a Turkish belly dancer.

Breakfast and dinner were a very big, very complete buffet-style spread with everything from Turkish style breakfast of cheese, salads, and olives, plus soup, meats, eggs, and all kinds of international breakfast food too. The dinner was just as full, with a grill and meat counter, more olives (obviously!), soups, and loads of desserts too!

On our second day, Kach’s aunt and uncle, who live in Ankara, drove down to meet us. We went exploring in the afternoon and visited the underground cave city of Derinkuyu. The story goes that this was a highly contested region between many civilizations, including the Greeks and the Persians, forcing the local people to dig their homes into rocks and under the ground to escape the danger! 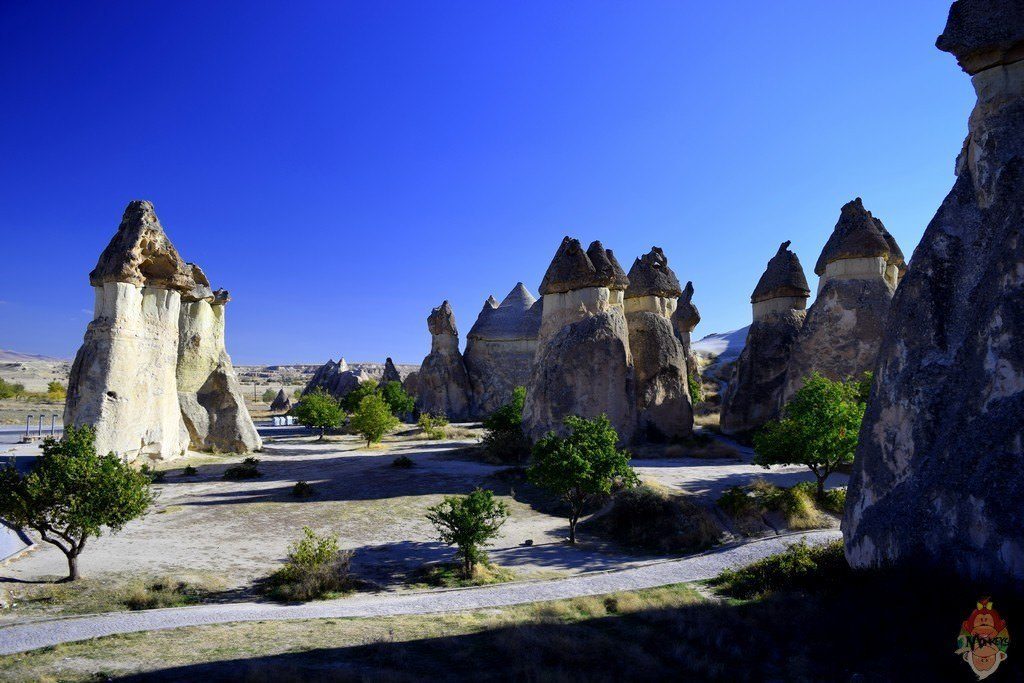 The area used to be a sea and then subsequent years of wind erosion carved the rocks into the shapes that can be seen today, projecting up several stories high, which the local residents then carved into their homes. When the first French visitors arrived, they thought that they must have been built by fairies (obviously?!), so they called them fairy chimneys! 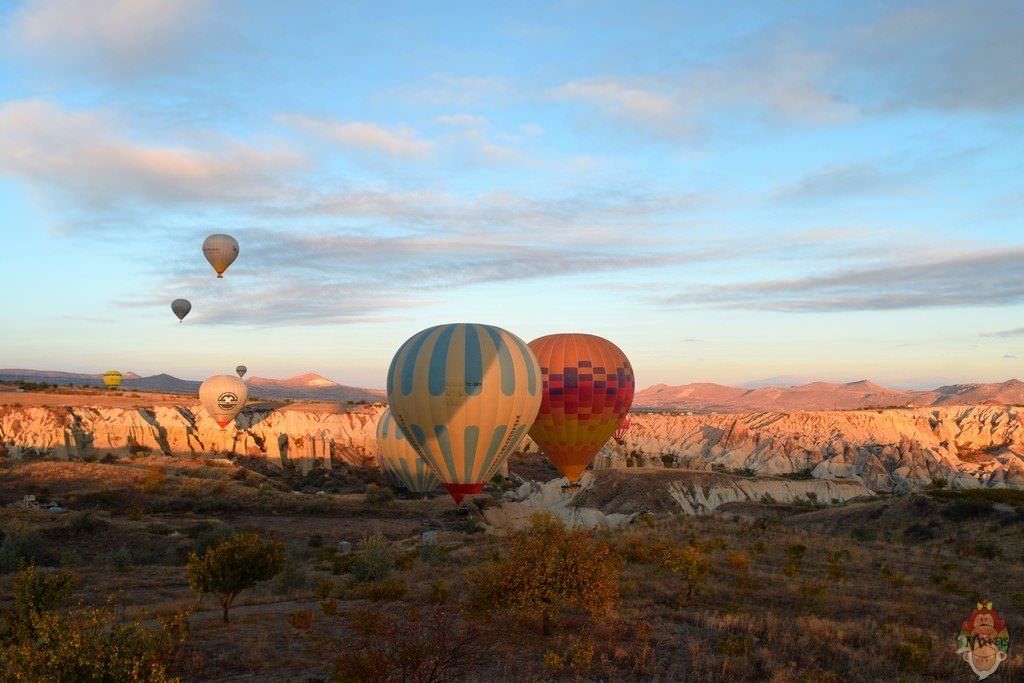 The next morning was the biggest day of our trip and the main reason we came to Cappadocia at all – the balloon ride over the land of the fairy chimneys. We were picked up at our hotel at 6 am and taken to the office of Voyager Balloons in Goreme, where we were given some worrying news… The wind speeds had picked up and we had to wait for the flight safety center to decide if it was safe to fly. If they didn’t, then we might not fly at all! 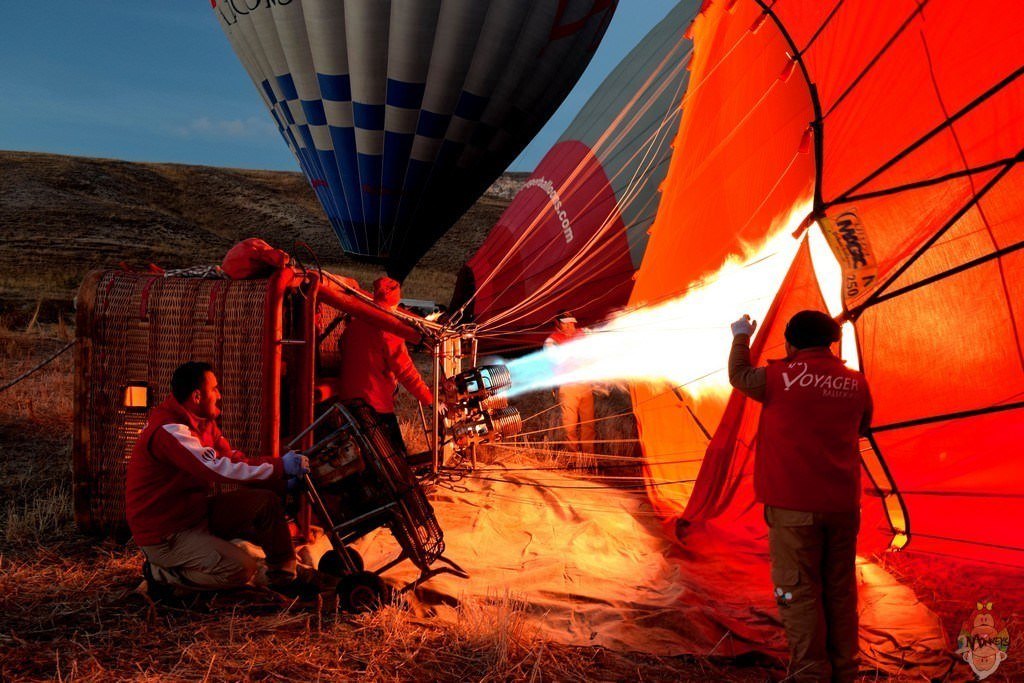 Luckily, the wind calmed down enough for us to take off and we were rushed into the van and driven to the take-off site. Being the first flight of the day, we arrived just in time to see the balloon being inflated, laid on its side in the dirt as the crew blasted hot air into it from the burners, gradually transforming it from a sad, saggy pillow into a magnificent glowing bulb of red and white against the emerging blue sky, all of which added to the excitement and anticipation! 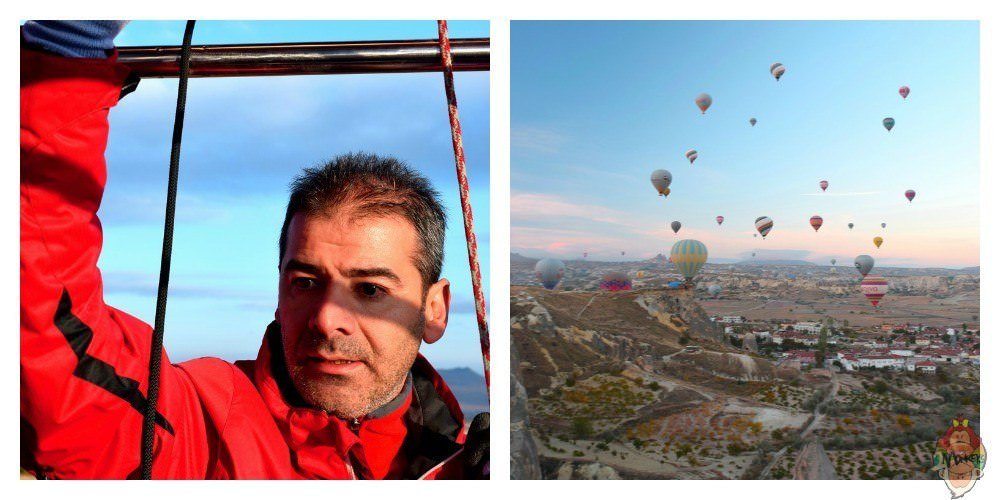 We all clambered into the woven basket one-by-one and listened to our pilot, Hakan, go through all of the safety information, he fired up the burners and we lifted off into the ground and into the air. Every other type of flying we’ve tried – paragliding; hang gliding; skydiving and bungee jumping (aka: awesome falling) – all had some kind of dramatic take-off, like a run, a jump, a push, some kind of effeminate screaming. But in the balloon, we simply rose into the air, only the intermittent blasting of the burners and the heat on our faces to tell us what was going on, just smoothly, gently, and gracefully floating up into the air! 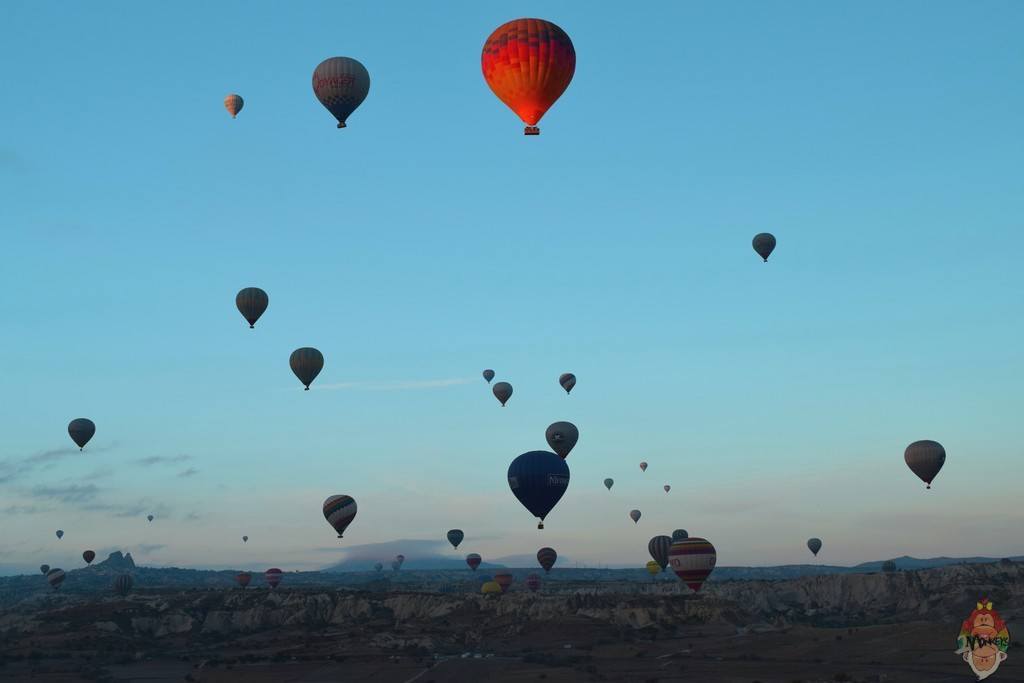 The scene all around us was of an early morning haze, as the blue pushed its way through the grey dawn with over a hundred multi-colored bulbs scattered across the patchy, cloud-strewn canvass, each lighting up at random to show off their colors, like birds competing in an exotic mating dance. 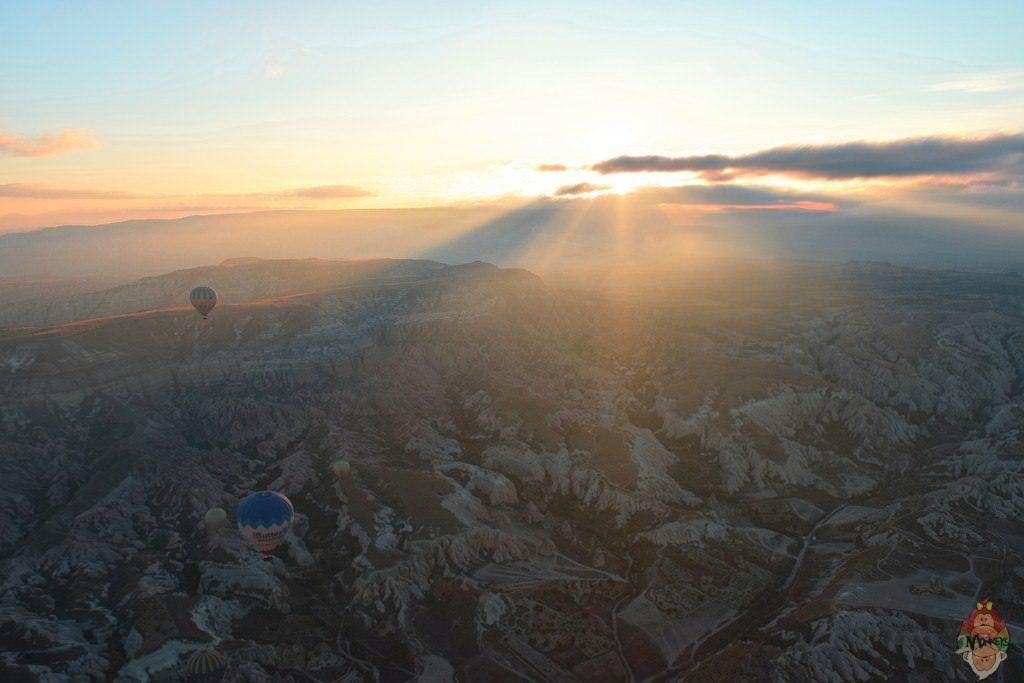 For over an hour we drifted with the wind over the fairy chimneys, ancient cave houses, rocky hills, and vegetation-filled valleys, only able to rotate, with no control over the direction in which we were headed. The constantly changing view of the landscape, sky, and balloons gave non-stop opportunities for incredible photos – it was really hard to take a bad one. 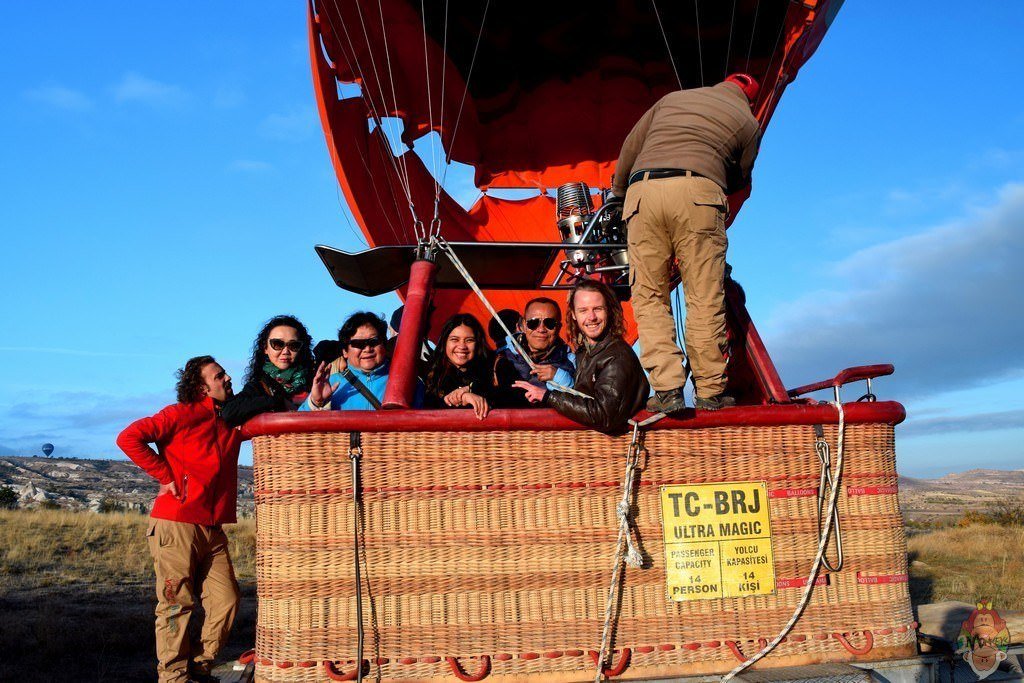 When it was finally time to land, Hakan lowered the balloon down with such precision that we actually landed perfectly on the trailer of the chase car!

After we had all climbed out of the basket and onto solid ground again, we ended our flight with an early morning glass of champagne. Flying in a hot air balloon in Cappadocia, Turkey, will definitely one of our most memorable moments for the rest of our lives!

7 Things To Do In Kuala Lumpur, Malaysia [with Suggested Tours]