Looking for the best cuisine in the Caribbean? Why not try these various types of local food in Cayman Island that you’d probably never heard before!

Caribbean coast, who will be able to reject its natural beauty? White sand, sparkling blue sea, calming waves, cool breeze that will be making your holiday more memorable. Moreover when you stay accompanied by the locals’ delicious dishes.

Your holiday can’t be more perfect. And one of the best islands in the Caribbean to be a holiday destination is the Cayman Islands.

Have you ever imagined eating turtle meat? It’s not quite a common meat, but here in Cayman Island turtle dish is praised by locals. Unlike most countries in the world, it’s not illegal to consume green turtle in the Cayman Islands. But it will be illegal if you bring a green turtle or its meat outside of the islands.

One of the most popular processed turtle meat is turtle stew. This dish is even considered as Grand Cayman’s national dish. The ingredient is similar to other Latin American stew, only the meat is different. In Cayman, the turtle stew is cooked along with cassavas, potatoes, onion, and peppers.  The dish then served with carbs like rice, beans, plantains or lettuce.

Turtle is protected in most countries. But the turtle which used to be the ingredient on this dish comes from stockbreeding, so you don’t have to worry and feel guilty while consuming this turtle stew.

When you’re in the Caribbean, seafood will mostly be your main dish. One of the options on the seafood that you can try in the Cayman islands is Conch stew. There are so many stalls and restaurants that are providing this dish on their menu. Conch stew is widely consumed by locals and it has a delicate texture and taste.

Conch is a similar type as escargot but it lives in the coral reefs throughout the coast and has a small size compared to other snails. Aside from being processed as a stew, conch sometimes is also processed to be fritters, salads, or soups. Most types of conch dishes can easily be found from November to April as it’s the best season for conch.

A post shared by CaymanIslandsFoodie (@caymanislandsfoodie) on Oct 8, 2019 at 11:06am PDT

Talking about seafood wouldn’t be complete if we left out fish dishes. Fish Rundown is Cayman’s most popular traditional fish-based seafood. This dish is a slow-cooked fish stew that is boiled along with coconut milk, cassavas, sweet potatoes, plantains, and many other ingredients.

This dish is actually quite popular in all parts of the Caribbean coast, but still, every place has its style to cook this fish rundown, depends on the available ingredients they could provide. The Grand Cayman fish rundown is using plenty of aromatic herbs that produce delicious aroma.

Lionfish is one of many beautiful creatures underwater. Although it has beautiful looks, lionfish has a deadly poison in its body. But with the right technique, lionfish can be a delicious dish that will be leaving you a great impression. Lionfish dish is quite popular in Cayman, but the most popular menu is fried lionfish.

Fried lionfish and breadfruit salad is a food end game. They make a perfect combination and you shouldn’t miss it while you’re staying in Cayman. One of the best places that served this menu is Michael’s Genuine Food and Drink. The chef and staff of this restaurant often come to the ocean and catch lionfish directly from nature and then bring it to your plates while it is still fresh.

How many types of shrimp dishes have you eaten all of your life? It seems like adding one more type of shrimp dish won’t be a problem. Unless you have an allergy to seafood, you have to try this Cayman shrimp dish, the Coconut Shrimp.

This dish can be found easily all over the islands. Most of the pubs or restaurants are providing this dish on their menu. Coconut shrimp is made from a fresh shrimp dipped on the freshly shaved coconut mixed with flour and spices then fried it using a deep-fried method. You can enjoy it as an appetizer or even snack to accompany your relaxing time. 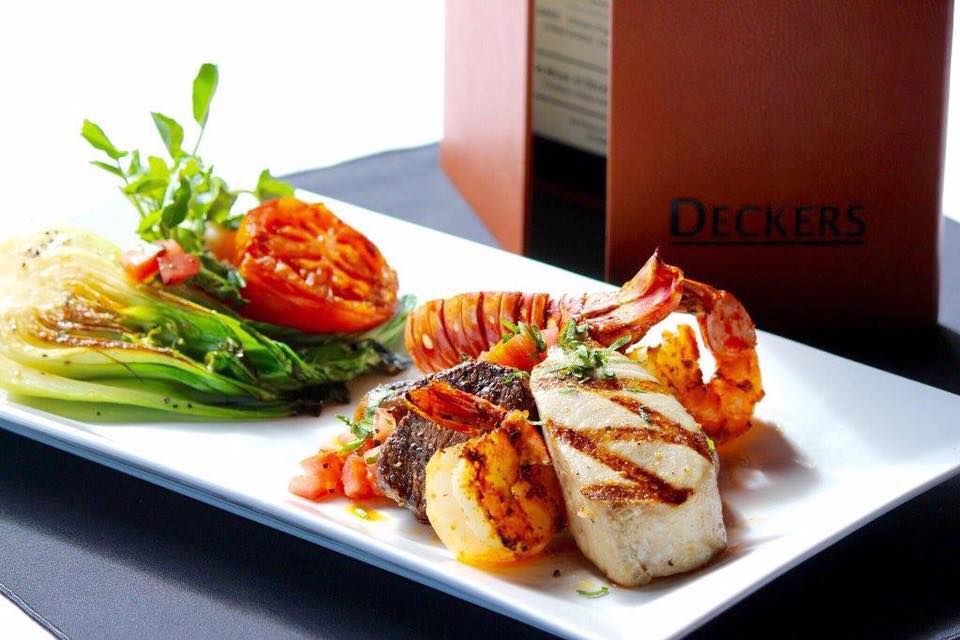 What is the champion of seafood cuisines? For me, it’s lobster. The thick meat seasoned with spices make a great combination and your tongue would never say no to its delicious taste. While you’re surrounded by the ocean, you have to try this Cayman lobster.

One of the best places that served lobster dishes is the Deckers restaurant in Seven Mile Beach. The chef cooked lobster with seasoning like hot sauce and scotch bonnet pepper that producing a tender and delicate lobster meat.

As for the dessert, Cayman has its traditional cakes. One of its cakes is Heavy cake or Cassava cake. Although the name of this dish is quite indifferent, don’t get it wrong. It has a delicate and sweet taste that will be spoiling your tongue from its sweetness.

This cake has a long history. Its recipe was found about 200 years ago and had been a popular dessert among locals. The heavy cake was made from shredded cassava, corn starch, flour, coconut milk, and eggs, with added vanilla, nutmeg or cinnamon flavor on it.

Every January-February, Caymanians hold an event called Cayman Food and Wine Festival and one of the most attractive things is Heavy Cake Competition at the Festival.

Relaxing on the beach and under the shining sun will be more complete with a glass of cocktails in your hand. Cayman’s traditional cocktail that has been widely popular among tourists is Mudslide. This cocktail will satisfy coffee and chocolate lovers since it has both of the substances.

The coffee and chocolate are blended along with Baileys Ice Cream, and Kahlua, and served it as a frozen drink. It was said that Mudslide was invented in the 1970s at Grand Cayman’s largest bar and it became popular since then.

Most of the local food in Cayman Islands are seafood-based dishes and it will make anyone who’s allergic to seafood be clever in choosing their dish. But if you don’t have allergies, then you have to try all of the seafood above.

9 Best Things To Do in Tallahassee, USA and Where to Stay

5 Best Things to do in Sisak, Croatia and Where to Stay