Home » Travel Blog » 7 Awesome Things To Do in Bamberg, Germany

Inviting you to its traditional houses and up-and-down roads, Bamberg must take a spot on your list of places to visit if you are in Germany. 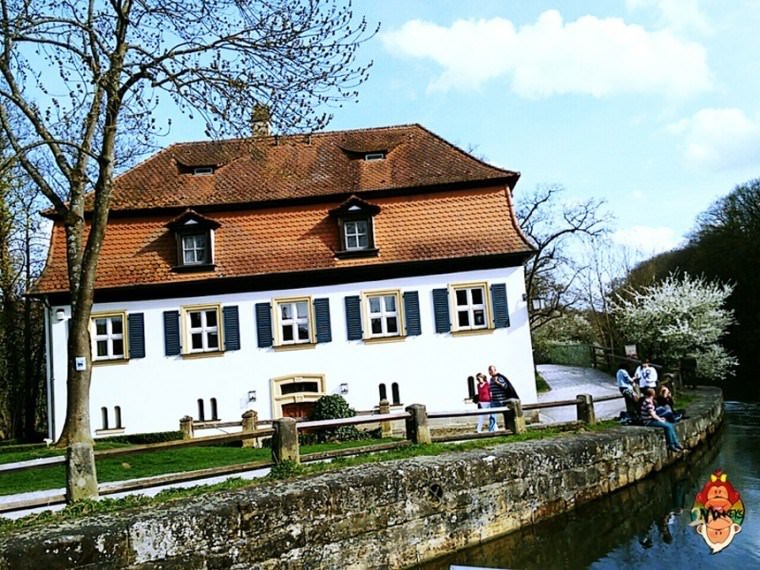 With 70,000 people living, who can imagine that this humbly populated city has been recognized and listed as UNESCO World Heritage Site for 22 years? Yes, the whole town of Bamberg officially grabbed its title in 1993. No need to imagine how this happened; just be fascinated by the awesome things to do in Bamberg.

Here are our 7 Awesome Things to do in Bamberg, Germany 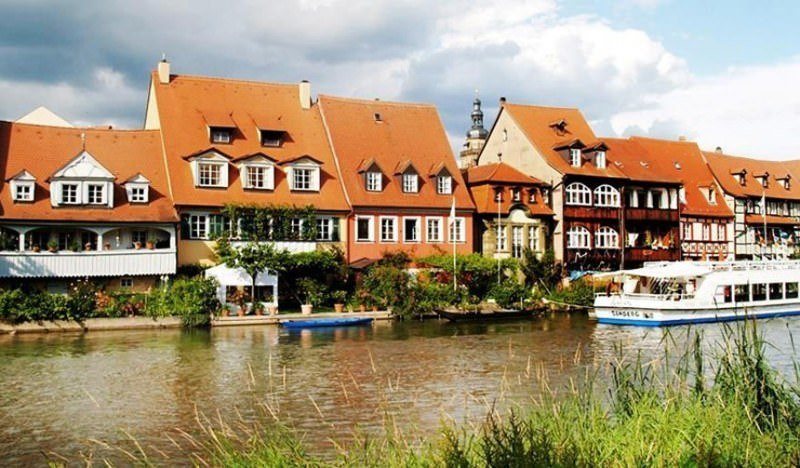 Join a river cruise along the residential areas. Photo by: Dwi Anoranganirum (Arum)

Upon arrival on the bridge after the Bamberg Center, a line of half-timbered houses welcome you. They are a strip of buildings which were mainly constructed in the middle ages. Formerly the fishermen’s village, this part of Bamberg has been one of the most favorites, tagging it as the Little Venice in Franconian Rome.

If you want to make your visit to Little Venice more memorable, make sure to come in August (around the third week of the month) and be part of the traditional Bamberg Beer Festival called “Sandkerwa”. During the festival, Little Venice serves as the background in portraying the dispute of Bamberg’s fishers as well as a notable Italian night.

2. Be mesmerized by an Old Town Hall resting in a river 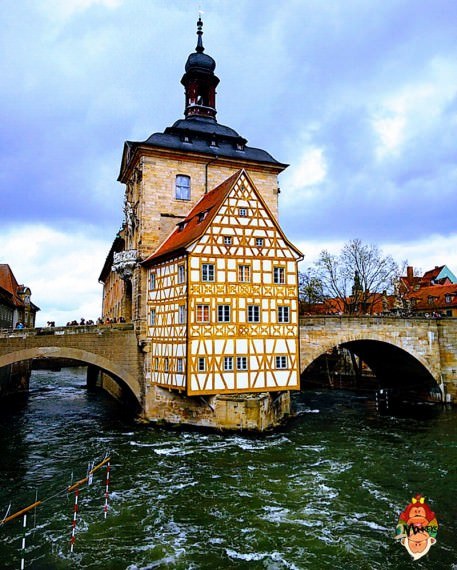 Another greeting attraction in Bamberg is the Old Town Hall which lies in the middle of the Regnitz River.  It was originally placed in 1386 but was reconstructed from 1744 up to 1756 to widen the services to the public. The impressive location of the hall on the island’s side of Bamberg is said to be forcedly done. Some records tell that former people failed to get land from the Bishop, where they can build the town hall, so they put up a human-made island where the city hall has somewhere to stand to.

Now, this three-dimensional baroque architecture is highlighting the old Rococo Hall and the Ludwig Collection. The Ludwig Collection caters to over 300 artistic figurines, animal-shaped serving dishes, and dinner services made of porcelain from the 18th century. If you are a big fan of these primitive collections, have access inside the old town hall. But if you are contented with its outside aesthetic, then grab your camera and shoot that best angle!

3.Visit Emperor Heinrich II and his wife Kunigunde at the Bamberg Cathedral 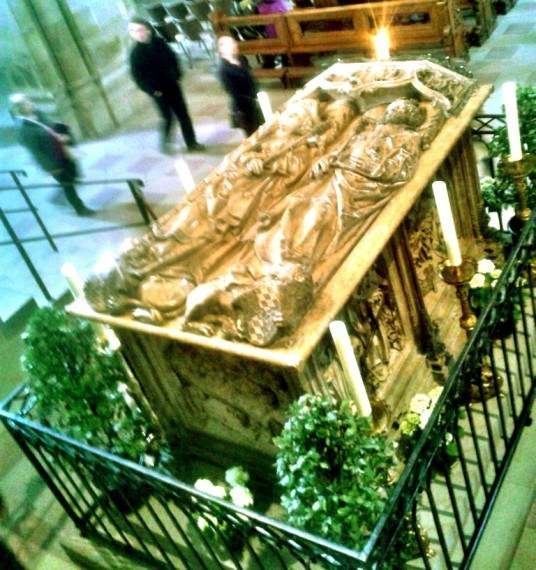 No, you will not meet Emperor Henry II who died in 1024, and his wife Kunigunde, but only to pay a visit to their ‘forever love’ tomb, created by Tilmann Riemenschneider, inside the Cathedral.  Also known as St. Peter’s and St. George’s Imperial Cathedral, it was initially constructed from 1002 up to 1012. After a decade of construction, a fire went it down, leading to the new formation in 1081. The third establishment was in 1111 and has survived until today.

The 11th-century Cathedral is considered one of Germany’s most important models of architecture from Romanesque to the Gothic period. It exhibits not only the royal couple’s tomb but as well as the Bamberg Horseman, the altar by Veit Stoss, and the papal tomb of Clemens II. 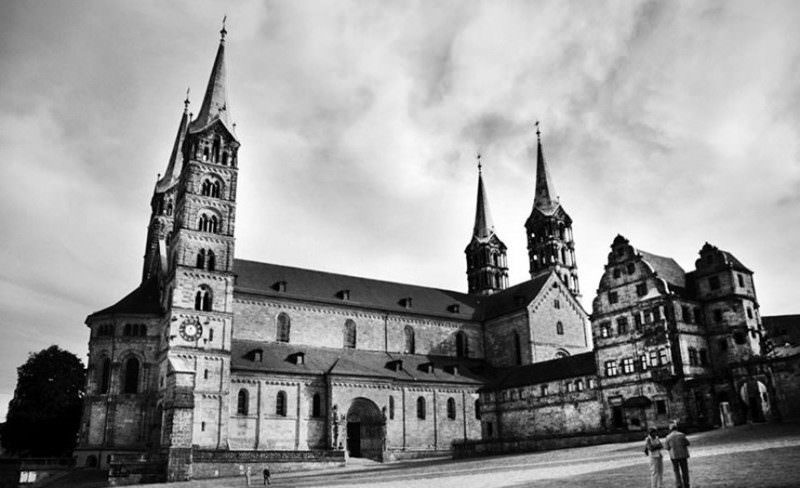 Scheduled tours are provided by the Cathedral Administration. It can include melodic concerts by the organ.

4. Fall in love with thousands of Roses in New Residence’s Garden

Who wants three pieces of roses for I LOVE YOU? Or a dozen to make it more romantic? Well, stop that little desire and load yourself with thousands in the Rose Garden of the New Residence.

More than 4500 roses are flaunted in the courtyard of the New Residence in Bamberg during summer. Touring around the columns of roses can give an almost perfect impression of relaxation. The café is ready to serve the visitors and benches are all stand by too for your weary feet to relax.

As Germany has four different seasons, do not expect the whole year of roses blooming. Nevertheless, pay a visit after the winter season to have a unique view of the garden and gaze as well the St. Michael’s Monastery.

5. Have a glass of Rauchbier (smoked beer) in a traditional brew pub

After viewing St. Michael’s Monastery, which is a former brewery, it’s time to try the original smoked beer in Bamberg.

Monasteries are said to be the origin of breweries and believed that smoked beer is invented accidentally. There was the fire in this religious foundation and bulks of barleys were smoked. During the middle ages, the monks are allowed to brew, which helps them to stay self-sufficient.

Presently, the distinctive taste of the smoked beer is preserved in Bamberg as barleys about in 36 hours. And to continually achieve the smoked beer’s taste like in 300 years ago, the master brewer needs to adjust the flame during the process.

Amazing, isn’t it? There are nine breweries, which are mostly internationally-acclaimed with awards, in Bamberg and all of them can definitely satisfy your beer-craving. If not, then try the other 70 breweries around the town. When you come back to Bamberg, lend a more space in your stomach and get drunk with its 50 varieties of beers. Prost! (Cheers!)

Embrace the delicious agricultural side of Bamberg by ordering the grilled onions stuffed with mincemeat or the Bamberger Zwiebel in a restaurant.

Way back in 1600, Bamberg was the center of onion cultivation, when vast production in Germany started. So in support of the main crop in town, place an order of their Onion Meal. Do not worry on your breath after; there’s nothing wrong in making your tummy filled. Locals said that Bamberger Zwiebel is best to taste during winter.

For the nth time, Bamberg has been compared with Rome including their same seven hill-structures. A peaky town displays the natural pride of every spot that it can offer. In Bamberg, churches and cathedrals; houses; and universities are some common stressed constructions, which are influenced by the exceptional medieval era.

For a day tour in Bamberg, to stand in the hilly alleys can be enough to fill your eyes with amusement. Enjoy your walk paths and peep the top sites situated in each hilly part of the town.  Yes, it could be tiring to walk the whole day, but the green scenery in Bamberg can get rid of that grogginess. Bamberg is one of the cities where you can still stroll freely, without minding any traffic around. This might also be the best combination of relaxation and tour, isn’t it?

Though the lists can be done in a day, do not miss the chance to spend more time exploring this ancient town.

How to get there: The nearest airport in Bamberg is Nuremberg. From there, you can take a one-hour train trip. An affordable day ticket, costing 18€ can be used. Purchase a Tagesticket Plus that can cover 2 Adults and 4 Kids, valid for a day.  Additionally, there’s a weekend promo which allows passengers who bought this ticket on Saturday, to be used it until the next day.

Check out some of the cool and cheap tours you could do in Nuremberg.

Planning to spend a weekend in Bamberg? Do not forget to do all or any of the things mentioned here. But I am sure you will also discover other awesome things to do in Bamberg! Share them!

Jessica Ayun is a Freelance Writer who writes if 5-10 cups of coffee a day will be served. She used to work as a TV Researcher but her feet are always curious to step into new places so she decided to work in the communities of Visayas and Mindanao as a  Documenter for almost two years, through a non-government organization (NGO). She tries to see the “real happiness” in every person she meets and every place she goes to. She will always choose mountains than beaches.

87 thoughts on “7 Awesome Things To Do in Bamberg, Germany”

How To Get The Most From Your Trip To Sicily