When I first arrived in St. Petersburg in 2001, I had to revise my opinion right away. What a beautiful and impressive city. It remains the most beautiful European city I have ever visited, and that includes Paris and Rome. Here is an extended tour of this most northern Metropole in the world.

Three centuries ago the city was still swampland. In 1703, Tsar Peter the Great decided to found a new city as a window on the west. The city is built on 42 islands and is crossed by the Neva.

In 1914, the town became Petrograd and then renamed Leningrad ten years later. After the collapse of communism in 1991, it was again named after its founder.

Here are 7 Awesome Things to Do in St. Petersburg, Russia

St. Petersburg has so many beautiful buildings, you can walk around for weeks and still find new, amazing places. However, don’t miss the following seven on your trip to St. Petersburg.

1. The Peter and Paul Fortress 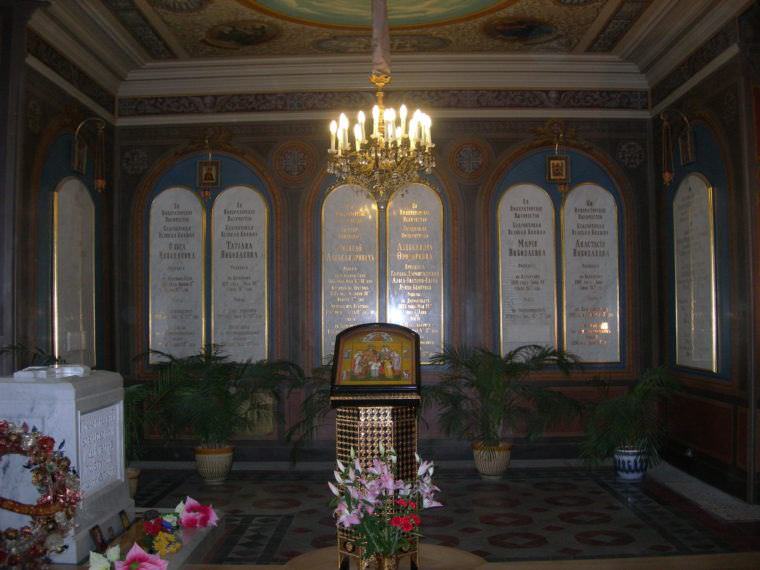 The Peter and Paul Fortress was built between 1703 and 1733 and was the first stone cathedral of the city. The spire is 123 meters high. It seems nothing compared to skyscrapers they build nowadays, but in the 17th Century it was quite an amazing feat. Once a political prison, the fortress is also  the burial place of the legendary Romanovs. Even Peter the Great and his son Alexei have their final resting place here. The latter planned a coup against his father in the 18th century. That failed however, and Alexei  fled abroad. His father lured him back as his long lost son and then punished him to death.

The Hermitage is one of the most famous museums in the world and is spread over several buildings. The most impressive is the Winter Palace. Until the Revolution this was the residence of the imperial family. The museum was created in 1764 from a collection of more than 300 paintings belonging to  Catherine the Great.  Nowadays it consists of more than 3 million pieces. The Hermitage is an art lovers dream for not only does the collection consist of more than 3 million pieces, but the building itself is a work of art. One of the showpieces is the Peacock Clock. When we last visited the Hermitage the clock (the epitome of kitsch) was put in motion especially for our group. On the hour the peacock’s ……. , the owl moves his head from side to side and the cock also moves.  At the back of the Hermitage you find the Place des Palais. Many famous events took place in this square, including Bloody Sunday in 1905 and the October Revolution in 1917. These days the events are much more pleasant. Many concerts take place here given by  stars such as Elton John and the Rolling Stones. Next to the Hermitage you find the Winter Canal, the narrowest canal of St. Petersburg.

3. The Church of the Spilled Blood 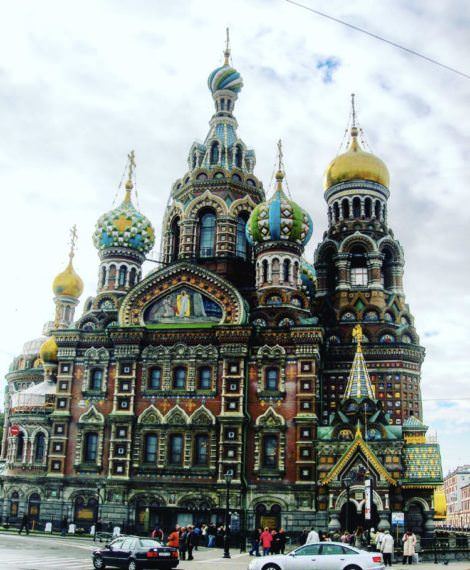 Also known as the Church of the Saviour of the Blood, this church is the most beautiful Russian Orthodox church I’ve ever seen. The church was built on the spot where Alexander II was assassinated in 1881. The building contains  75,000 sqm of mosaics and the five domes are a true work of art.

This Cathedral began as a small wooden church in 1707.  In 1819, they started with the construction of the cathedral, which is still one of the largest in the world.  The foundation alone took 5 years and required 125,000 workmen. Each column is made out of one block of Finnish granite and there was 100 kg of gold leaf necessary to cover the dome. Make the effort to climb the tower. You will be rewarded with a beautiful view over the city.

Nevsky Prospect is the main street of the city and was once known as the “Street of Tolerance “  due to the many churches of the most diverse religions.  At house number 120 is a sign that dates from the time of the siege with the warning “Civilian! This side of the street is the most dangerous during artillery.” Pushkin left from the Literary Cafe in 1837 to fight his fatal duel. A bit further on the Kazan Cathedral consists of 96 Corinthian columns in four rows forming an arch overlooking the Nevsky Prospect. The builders were inspired by Roman architects.

Just as you need to go to Broadway in New York, while here you should here also visit the Mariinsky Theatre.  The biggest ballet companies performed in this renowned theater.  Tickets to a ballet or opera can be booked here. I’m not a real fan, but I enjoyed “Swan Lake” by Bolsjojcompany. This really is a once in a lifetime experience. 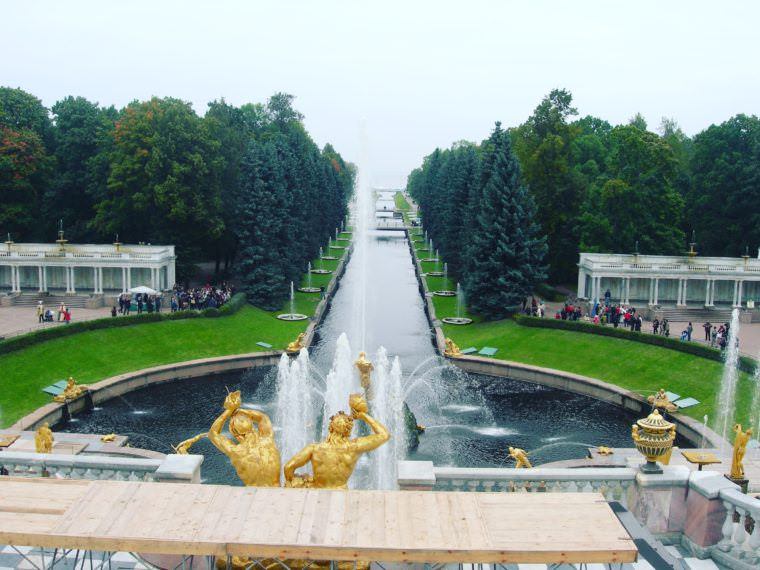 Outside the city there is one attraction you absolutely have to visit. Peterhof is one of the most impressive sites in Russia. You can go by hydrofoil (leaving in the center of St-Petersburg) or by car.  It’s a long drive, but it gives you the chance to see another part of Russia. Once you’re out of town, you get to know the dark side of Russia. The gray buildings and the dismal streets  are a far cry from St. Petersburg’s light and glamour. 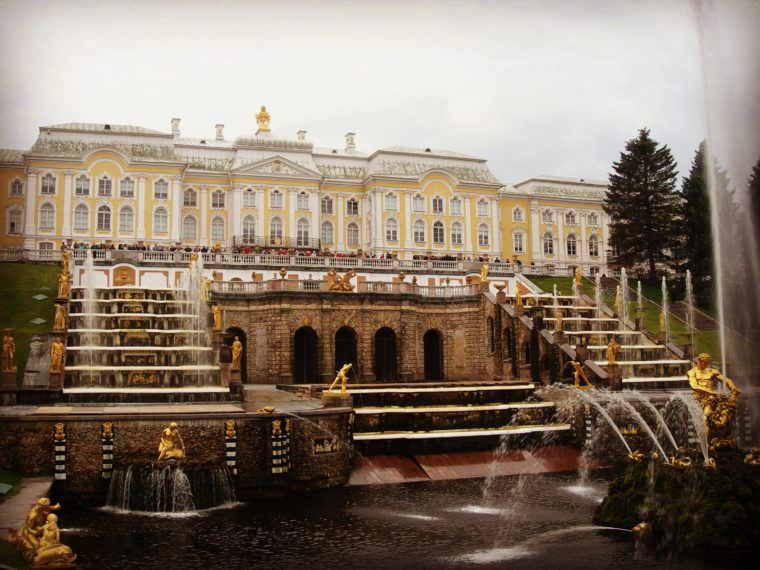 Peterhof was built in 1705 as a country retreat for the imperial family. Peter the Great wanted a palace appropriate for the highest nobility.  A visit to Versailles increased his ambition. From the frontdoor of Peterhof an artificial sea channel departs to the Baltic Sea so that the Czars could sail as close to the palace as possible.  The impressive cascade takes you past 37 statues, 64 fountains and 142 water sprayers – a feast for the eyes. From 1941 to 1944 the palace was occupied by the enemy. Fortunately, all artworks were removed in time and even buried to save them.

Inside Peterhof, the main staircase and the throne room are very impressive. 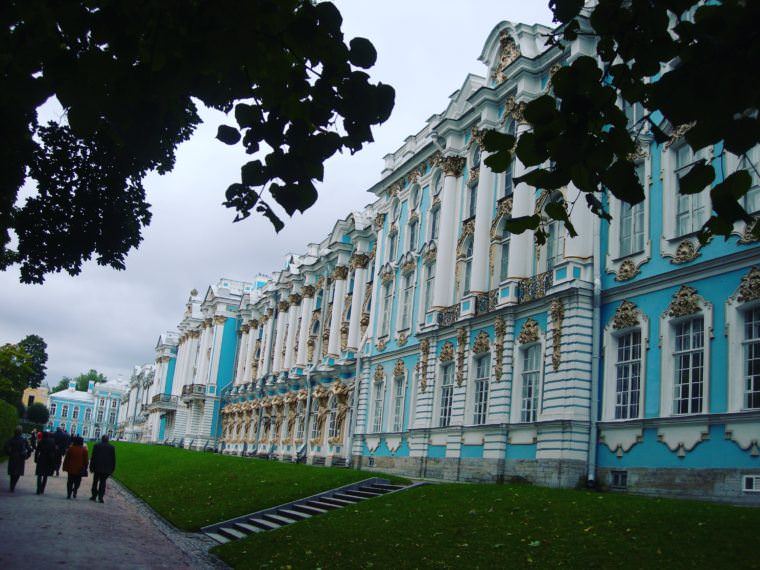 Looking for more? Visit Catherine Palace in Pushkin. This was the summer palace of Czarina Elizabeth. She named it after her mother Catharine the Great. The stunning 300 meters long façade is adorned with a profusion of columns and ornaments – obviously unaware of the ‘less is more’ concept. Completely destroyed during WWII, the building was reopened to the public in 2003.

Where to Stay in St. Petersburg, Russia

St. Petersburg has two world-famous hotels.  One is Grand Hotel Europe one Nevski prospect, but that is unreasonably expensive. 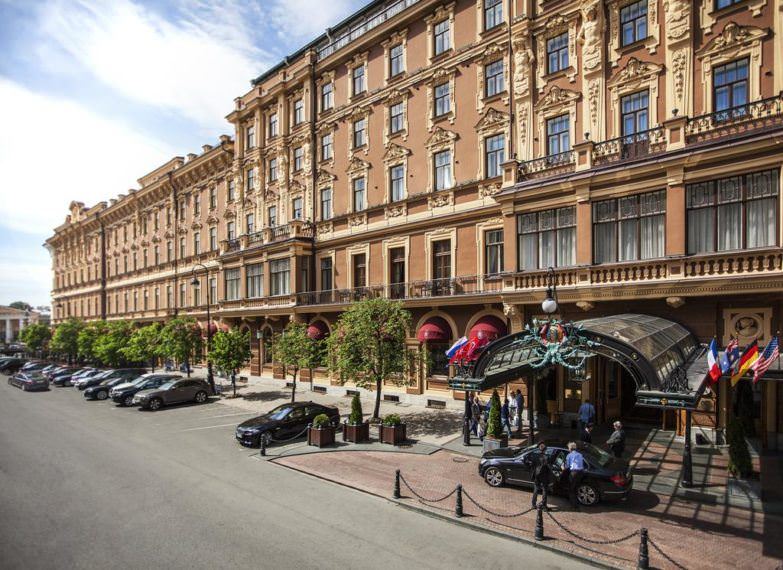 We chose to stay in Hotel Astoria. With its great location on St. Isaac’s Square, opposite the cathedral, it is an ideal base for exploring the city. 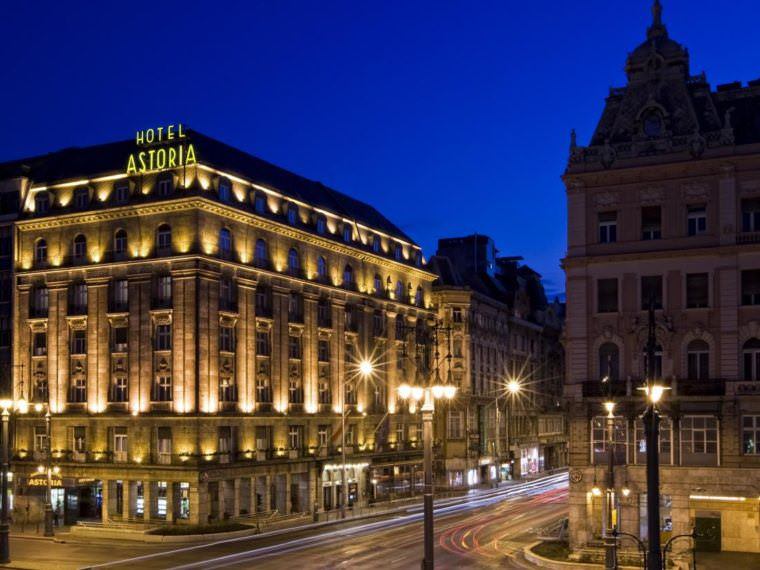 The hotel is not only a beautiful and incredibly luxurious building, it also has a very rich, if somewhat morbid, history. Hitler planned to celebrate his victory over Russia here. John Reed, author of “Ten Days that Shook the World’ stayed here when the Bolsheviks seized power, and the poet Sergei Yesenin committed suicide in one of the rooms. But first he wrote “Dying is not new, but life is not new either” with his blood on the wall – just to name a few examples.

If you are looking for a midrange hotel you can try Marriott Courtyard Pushkin.  It’s still a good location but it’s a lot cheaper. 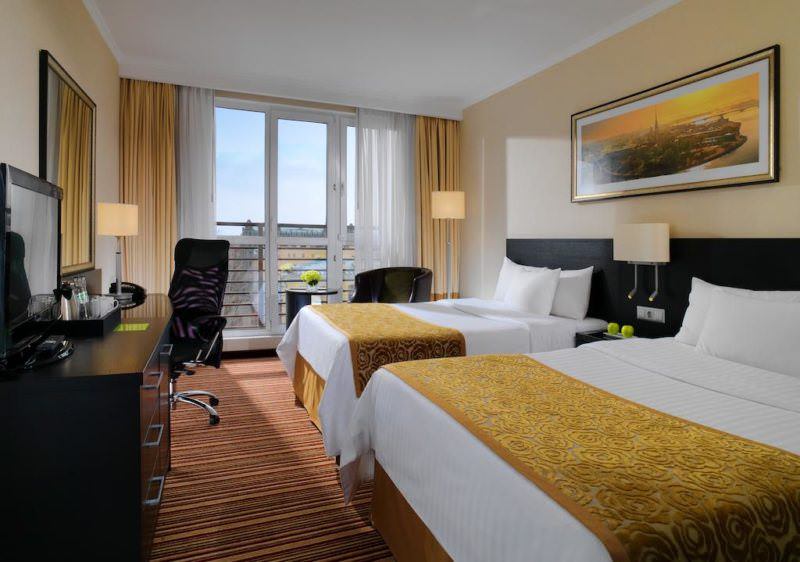 As you are still in Russia, I don’t advice to stay in a real low-budget hotel, but that’s only my personal opinion.

Where to Eat in St. Petersburg, Russia

Nowadays there are many good and trendy restaurants in St. Petersburg.  Some recommendations are: 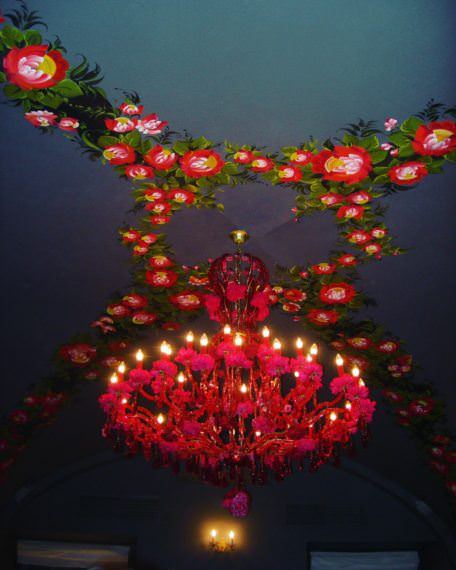 Sadko The beautiful interior alone is worth the visit. 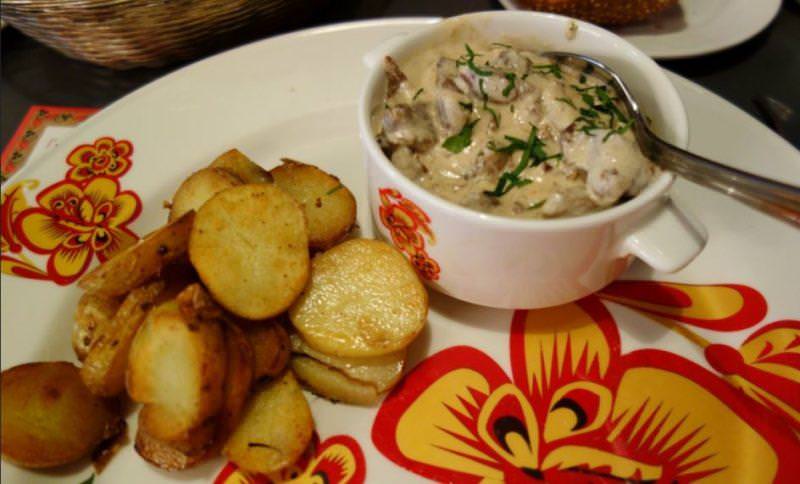 Podvorye is a bit out of town. It is a wooden building, constructed  in accordance with the 18th-Century Russian architecture. The inside is entirely in wood, the kitchen is very traditional and you can enjoy a folkdancing performance. The hotel burned down a few years ago, but has been rebuilt.

In Peters’ Soldier, you can enjoy a dinner and vodka tasting.

Aquarell is a floating restaurant on the Neva not far from the Peter and Paul Fortress.  It serves Oriental and European cuisine. 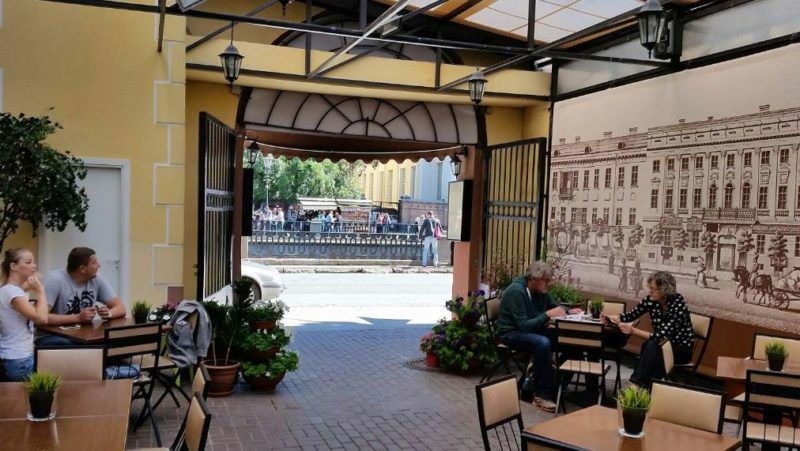 Park Giuseppe has a good price/quality ratio and a unique location next to the Church of the Spilled Blood. 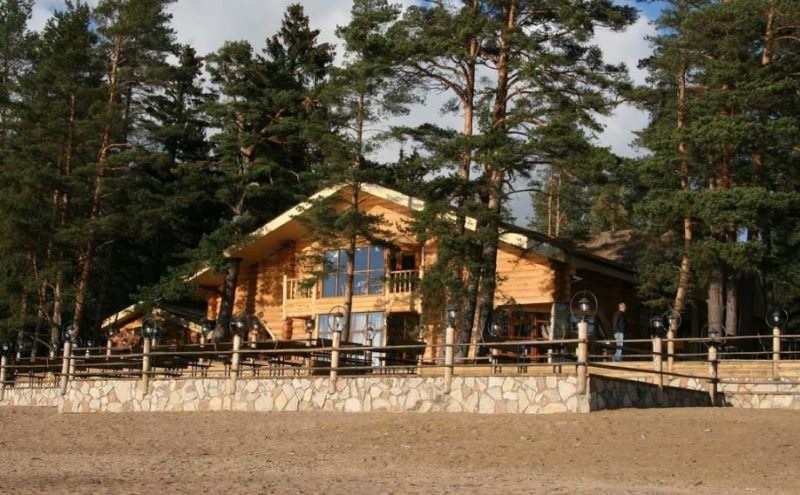 Fishing enthusiasts have to go to Restaurant Russkaya Rybalka near the Finnish Bay, just outside of St. Petersburg.

So surprise everyone with your next citytrip and don’t go for the obvious cities like Paris, New York or London, but visit the magnificent Czars City.   I promise you won’t regret it. 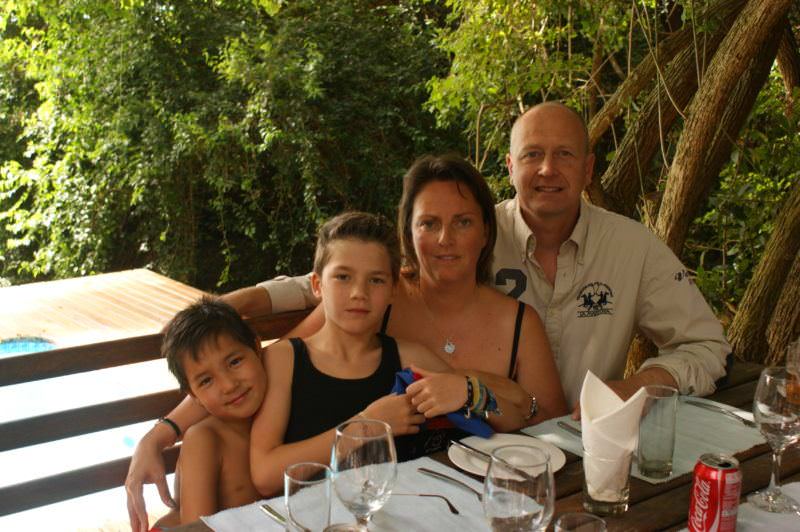 I am Wendy, a 43 year old traveladdict, foodie and bon vivant. I travel the world with my husband and 2 kids. I travelled 63 countries up to now, but I hope to reach 100 before I’m 50.  I have a great love for nature tours and like to sleep in a luxury hotel/lodge.  I lost my heart in Africa.  Blog: WorldWideWendy.
Social Media Accounts: Facebook, Instagram, and Twitter

2 thoughts on “7 Awesome Things to Do in St. Petersburg, Russia”

7 Unique Things To Do In Toronto, Canada @restlessworker

Digital Nomads! How to shop in the US from abroad and deliver worldwide! @usdelivered