Never underestimate the power of having a friend in your travel destination.

I love traveling, and I always grab the chance to as much as I can whenever the opportunity presents itself.

In fact, my first job right after graduation involved traveling, which is why I said “yes” without hesitation when my former instructor asked me to join her team to conduct fieldwork research for a project she was handling. I was traveling and getting paid while doing it. After the project ended, however, I needed to return to Baguio City, my place of residence and tried doing office job for a while until I decided to go back to school for graduate studies.

In between the hectic life of the graduate school and doing home-based jobs, I traveled here and there whenever I get the chance to. One of the most awesome adventures I had for May 2014, however, was to finally be able to witness the breathtaking sunrise of Mt. Pulag in Kabayan, Benguet. That would never have been possible if my friend, Lesley, who is a local of the place, did not invite us there and made all the arrangements for the whole travel. We originally planned only to hike Mt. Pulag. We ended up doing more and doing some of the most awesome things there.

Now, I will have to apologize for not being able to give a how-to guide in arranging for travel there because, as I said, Lesley arranged everything for us because one, she felt that being a local there, she can get us a fair price for the transportation to take us to the starting point of Mt. Pulag, and, two, we simply did not have the time to do it ourselves. It all worked out well for us.

Okay, then, I’ve made my excuses. Can I just please, please, please tell everyone what the heck are the awesome things we did in Kabayan, Benguet right now without any more excuses? All right then.

Here’s my list of Awesome Things To Do in Kabayan, Benguet

Ride on a motorcycle on your way to the ranger station, the starting point of your Mt. Pulag trip

Okay. I’d like to put this first because I am just going to treat it as a given that when you go to Kabayan, Benguet, you will never pass up the chance to hike Mt. Pulag. I mean, it’s the third highest mountain in the Philippines at 2,992 meters above sea level. You will experience a lot, and that is my number two. But you will also enjoy this trip by taking motorcycle rides to the starting point rather than the usual jitney ride. If you’re anything like me, you’ll love the thrill of the speed. Fair warning, though, the motorcycles are not exactly brand new, so if you have reservations about going full-on Motorcycle Diaries adventure, I advise you to just take the jitney. You will not be able to drive the motorcycles yourselves because the locals offering the ride will do the driving themselves, which is safer, by the way, because they are familiar with the terrain. Also, if it’s rainy and foggy and you are not at all familiar with the terrain, you would do so much better to trust the locals. They offered us the ride for PHP 200.00 each (about USD 4.50).

There are two ways you can do this, according to our guide: you can either take the Akiki Trail (longer trail) climbing up and the Ambangeg Trail going down (shorter trail) or the reverse. The First one will take you about three days two nights to reach the summit while the second option will take you only a day and night to reach the summit. We took the second option because we felt like we could not fully commit to a three-day-two-night climb because we are not really all that athletic. We decided to take the shorter route first and then take the Akiki Trail going down and maybe do the reverse next time. It was still awesome! You will, I tell you, stop lots of times just to take in the breathtaking views you are passing up, and you will even forget to take pictures because you are just mesmerized.

Well, let me tell you at this point that you will not be allowed to set up camp at the summit. The nearest you can set up camp in is at camp 3, which is at least a 30-minute climb to the summit. It took me almost an hour because I am not athletic. In fact, I was almost crying for salvation while I was crawling to the summit. But I am glad I braved the 4:00 a.m. wake up call and the freezing temperature to witness the sunrise. It. Was. Spectacular. Now, some may not be as lucky to witness the sunrise because it might be cloudy, which, according to some travelers happen during the months of November to January but the bed of clouds, I hear, are just as spectacular.

Unfortunately, we were not able to visit all the four because our legs feel sore and it would take some more climbing to be able to complete the visit to the four lakes. We did this after our descent from Mt. Pulag and after taking a night’s rest at Lesley’s house in Kabayan. Some locals are offering home stays for travelers who wish to take a night’s rest after the entire Mt. Pulag adventure before proceeding to visit other destinations, such as the four lakes. The four lakes are Lake Tabeo, Lake Ambulalacao, Lake Letepngepos, and Lake Incolos. Since Lesley’s place is nearest to Lake Ambulalacoa, it was the only lake we were able to visit. It was, nevertheless, awesome because the way there was a short climb from the main road and which looked like a setting from a fairy movie or some gateway to a secret garden.

Kabayan, Benguet is home to the Ibalois, an Indigenous Peoples (IP) group in the Philippines. It is especially of interest for me because I majored in Social Anthropology in my undergraduate studies. The Ibalois are known for mummifying their dead in the past but some, according to Lesley’s grandmother who was born and who grew up in Kabayan, are still practicing mummification. This was confirmed by Lesley’s dad and uncle who helped in some of the burial processes of the mummies. You will be amazed. I promise.

Upon getting to the burial grounds, we saw a big rounded rock. Lesley’s dad pointed at it and said, “That’s the burial site.” Our jaws dropped. A part of the rock is hanging from the ground level and yet there were able to make a hole on it to insert coffins. We were careful to be very respectful as we know we were in a burial ground, a sacred one, so we kept our voices to a minimum, and we took our pictures at a zoomed angle in order not to move anything accidentally or intentionally. We also asked careful permissions from Lesley’s family if we can take a picture of partially exposed bones at the burial rock nearest to the ground.

Lastly, get to know the locals

People always interest me. People always have stories to tell. A travel destination will always feel more unforgettable and more mesmerizing if you get to know the culture and the stories of people who live there. Lesley’s parents, for example, have an interesting story of how they met. Her dad used to be a member of the former Philippine Constabulary who was assigned at Kabayan. He met her mom, and it was the beginning of his journey to become a part of the Ibaloi culture. He was originally from Pangasinan, but he has lived in the place for so long he can now speak Nabaloi (the Ibaloi language) fluently and, occasionally, guide tourists to Mt. Pulag.

And Lesley’s grandmother, oh her lovely, vibrant, awesome, energetic grandmother, was just amazing. She kept mocking us in Nabalaoi how we’re such weaklings for not being able to climb over a fence that was blocking the stairs on the way down to a lower spot on the burial grounds. Her 70-plus-year-old nimble self even demonstrated how to climb over the fence twice. We just fell in love with her at that moment. 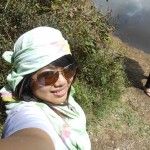 April Bangcayawan. I’m a daughter of the Philippine Cordillera mountains who traces her roots in Sagada, Mountain Province, another popular travel destination in the Philippines. I would love to be able to travel all over the Philippines first and then Asia and then the World. But first, I have to complete my graduate studies and then pass the examinations. Until then, I remain to be the happy and curious occasional traveler that I consider myself to be.

2 thoughts on “6 Awesome Things To Do in Kabayan, Benguet @tourismPHL”

Open Letter to a Girl Who Travels