Our entrance to La Paz had been a little more than your average bus journey; high winds and heaving waves on the Tiquina Strait of Lake Titicaca made for a very interesting ferry crossing involving sitting on a bus as it pitched up and down on a flimsy floating platform, with the wind lashing rain against the windows. We really shouldn’t have been on the bus on a ferry like that – the lake bed is littered with less fortunate attempts – but we made it across all in one piece! Adventures, Beers, and Breweries in La Paz, Bolivia: A week trip. 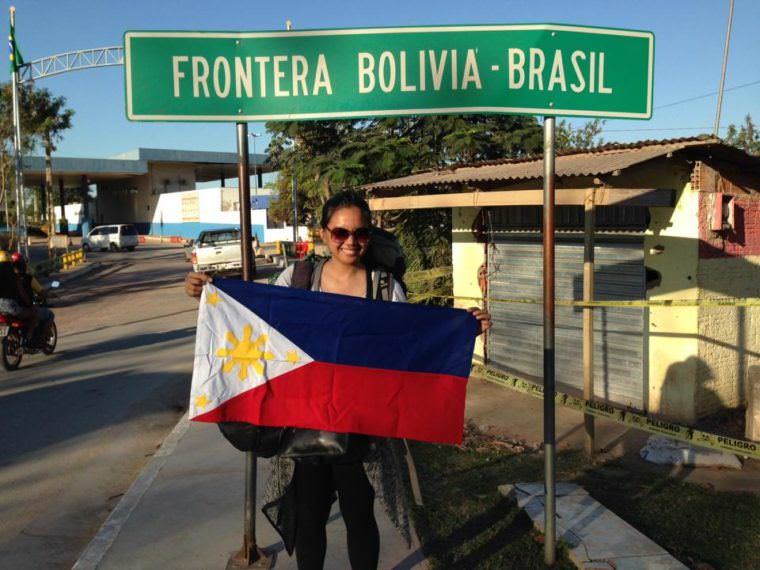 Check out some of the cool and cheap tours you could do in La Paz and Lake Titicaca.

The Best in La Paz, Bolivia

Eventually arriving in the Centre of La Paz at about 3 am, we banged on the door of the Adventure Brew Hostel, which was opened by a friendly Bolivian security guard, who then woke up the poor receptionist who was on duty for late arrivals. Despite being woken up, he was friendly and took us to our private room in the Bed and Breakfast building, just two doors down the street. The dorms are in a separate building, with 4 floors of large shared rooms and an awesome, lively bar on the ground floor, complete with a pool table, fuzzball, and movie room. 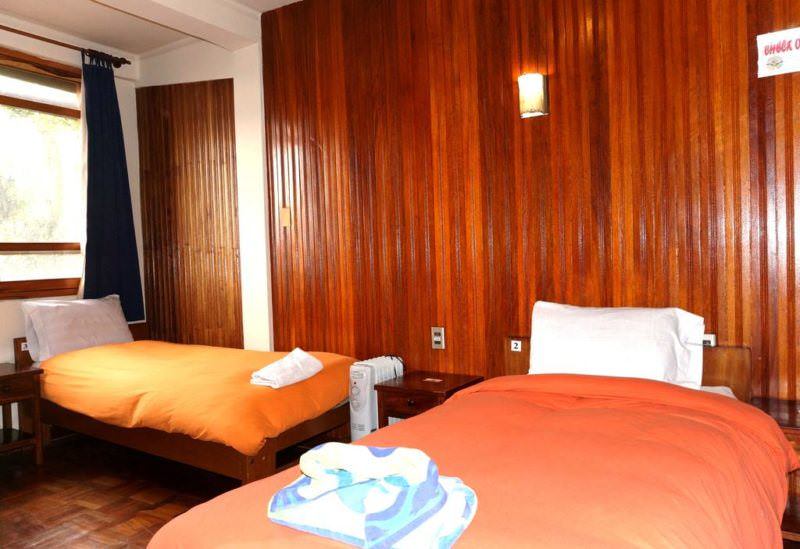 The bedroom was big, with a comfortable bed and a warm duvet. Double glazing kept out the noise from the street and the shower ran hot any time of day or night (important in the highest capital in the world!) Breakfast was unlimited pancakes, coffee, and tea, with jam and chocolate sauce…Awesome! 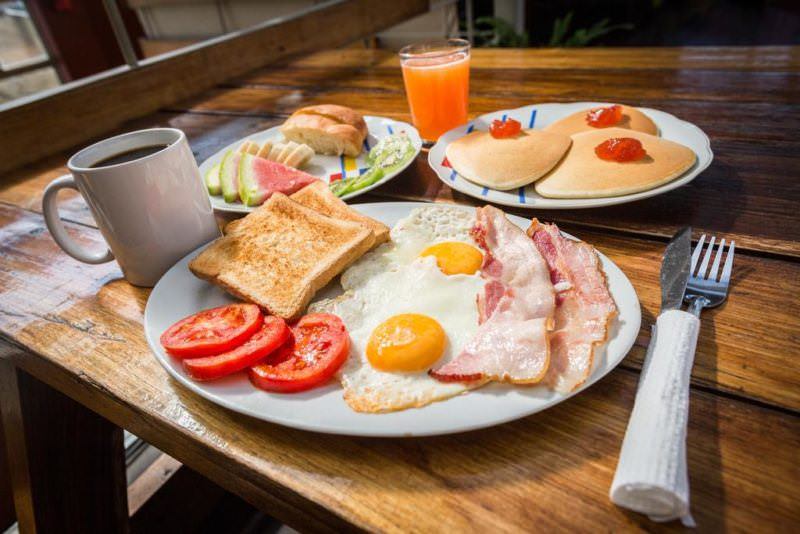 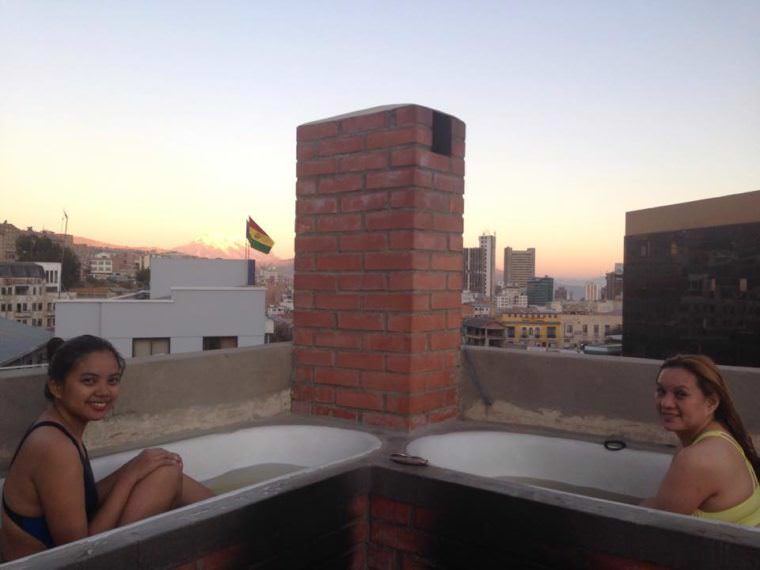 On the top floor of the Bed and Breakfast, you’ll find the Sky Bar, which is also home to the Beer Spa. (Yes, it’s as cool as it sounds!) Pretty simple really, it’s a hot spa, filled with beer! Two bathtubs mounted off the ground in bricks with a fireplace under each one and a chimney linking the two create the simplest spa in the world! Fill the tubs with water, light the fires, get in and add the beer. It feels good, it tastes good and it’s good for you it’s full of vitamin B (or vitamin beer!) If you stay here, the spa is free when you buy a beer! 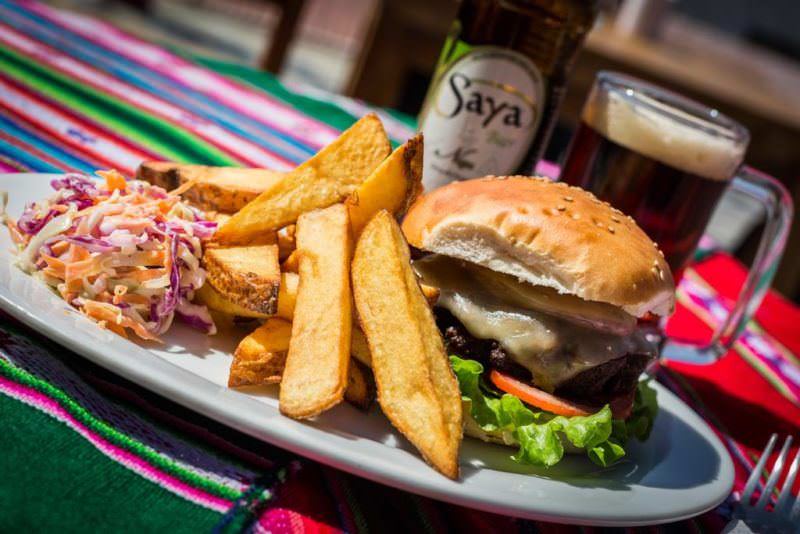 You might be wondering where all this beer comes from. The name Adventure Brew is no accident; the owner, Remo, began brewing his beer over 15 years ago before the hostel existed. Saya beer is the result of fifteen years of perfection, with pale, amber, and Negra brews created in a dedicated organic brewery about 1 hour from La Paz, amidst fields and farms, using purified, locally sourced spring water. We spent Christmas Day in the Saya Brewery with the Saya Brewery Tour. Only $25 including transport, the tour, unlimited beer, and BBQ! We had an awesome day chilling and drinking in the garden, playing with the dogs, and eating awesome food – probably the best way to spend Christmas Day away from home! 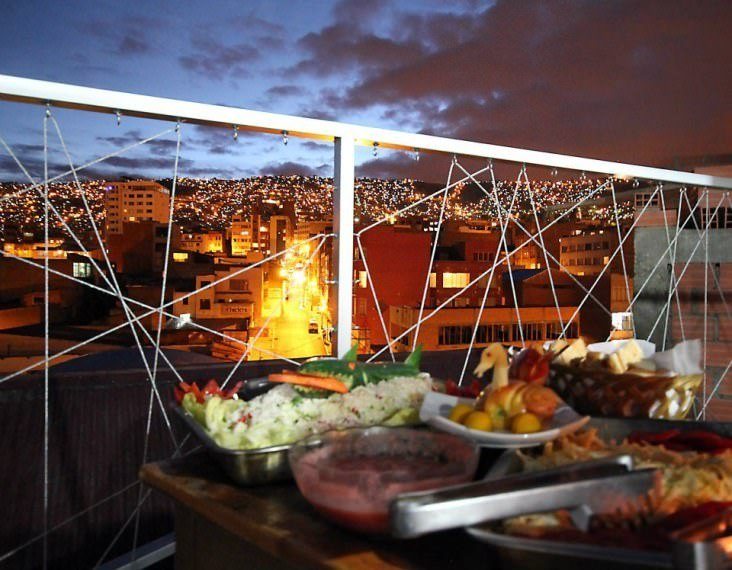 If you’re looking for a place to party then La Paz has that too. We started the night in Adventure Brew, with a free beer for guests, followed by the best Caipirinhas outside of Brazil. They’ve also got beer pong and a bar that keeps dancing till about 2 am. After that, you can head to any of the city’s many clubs and bars that stay open until the early morning hours. 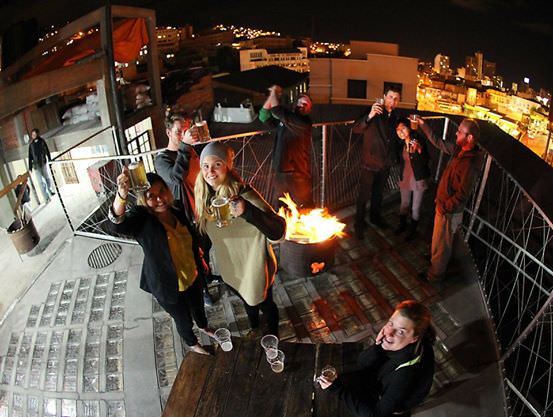 Related Article: Looking for affordable accommodation? Check out our Ultimate List of Best Hostels in Bolivia.

The best parties are always on the roof! 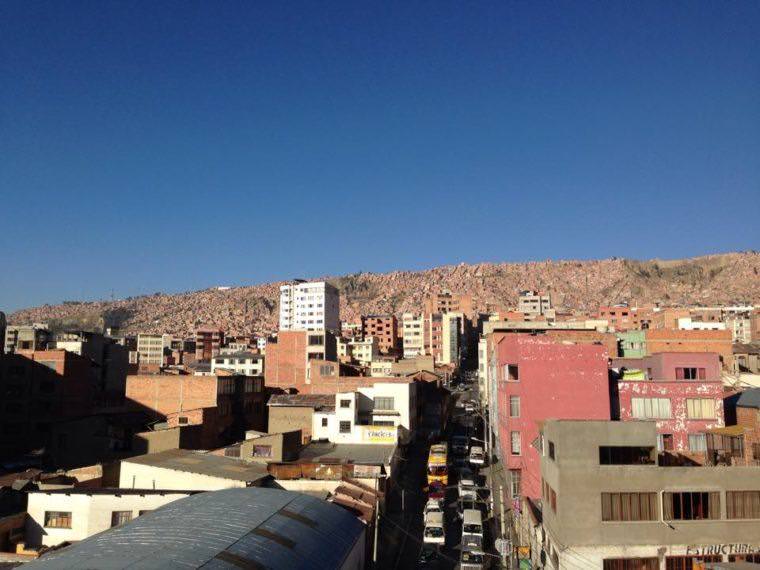 If you’re thinking of avoiding La Paz because you prefer the great outdoors and adventure sports, think again. With adrenaline-fuelled activities like abseiling fifty meters down the side of a five-star hotel with Urban Rush and cycling The World’s Most Dangerous Road with Barracuda Biking, there’s no shortage of excitement in La Paz for danger junkies. On our second afternoon, we headed down to the Hotel Presidente, to abseil down from the top floor, Mission Impossible-style, with Urban Rush. 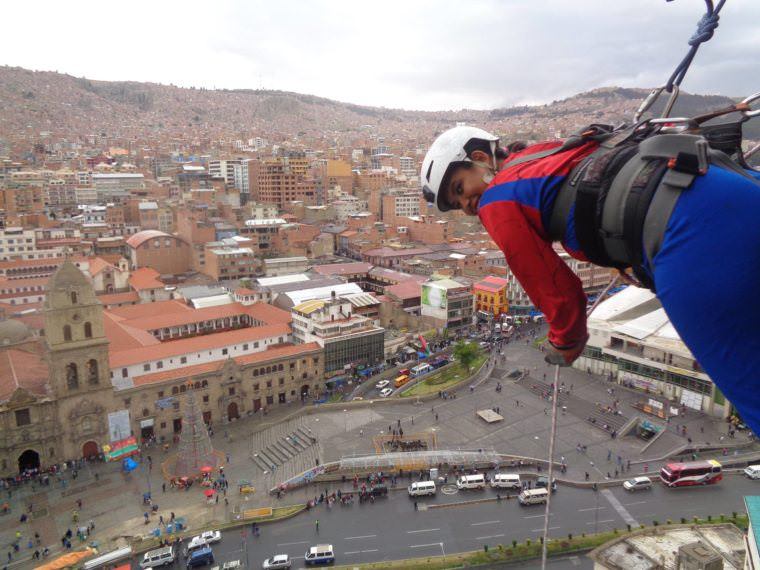 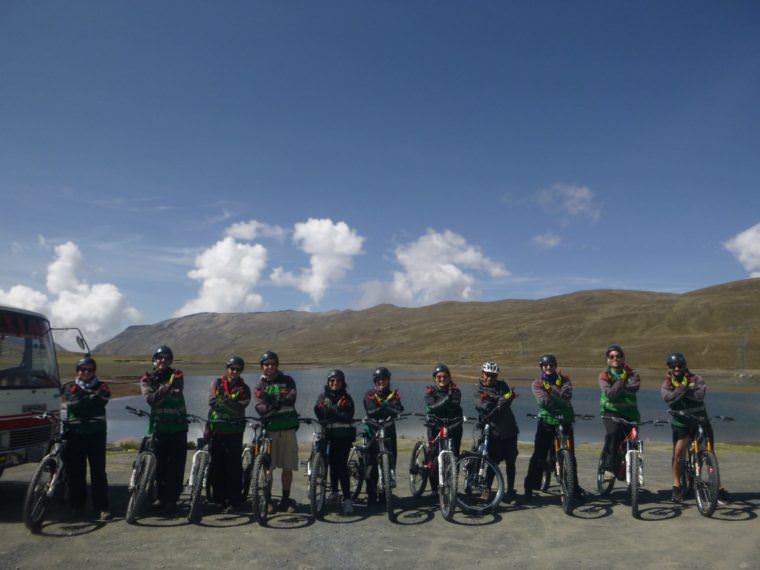 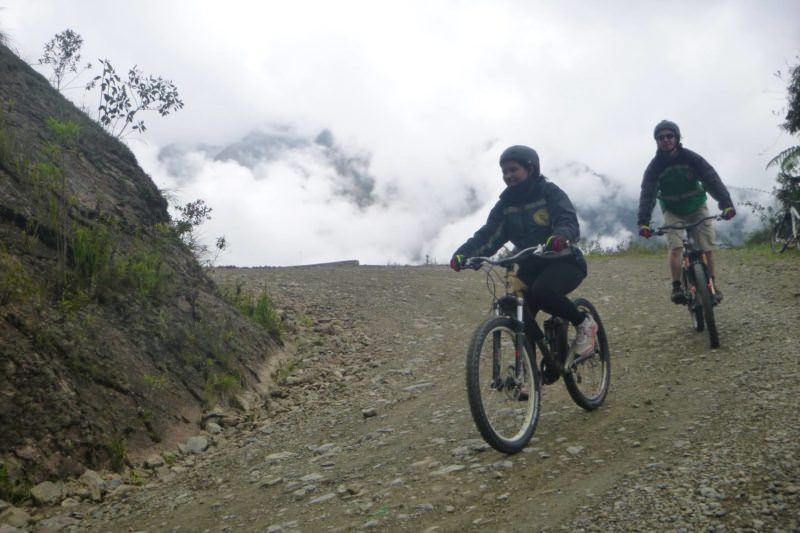 The next day we signed up for the Death Road mountain-biking trip with Barracuda Biking; starting at 7 am and arriving back at about 7 pm, it’s a full day of awesomeness! Check out both adrenaline-fueled experiences here – Barracuda Biking and Urban Rush.

Other stuff to do in La Paz 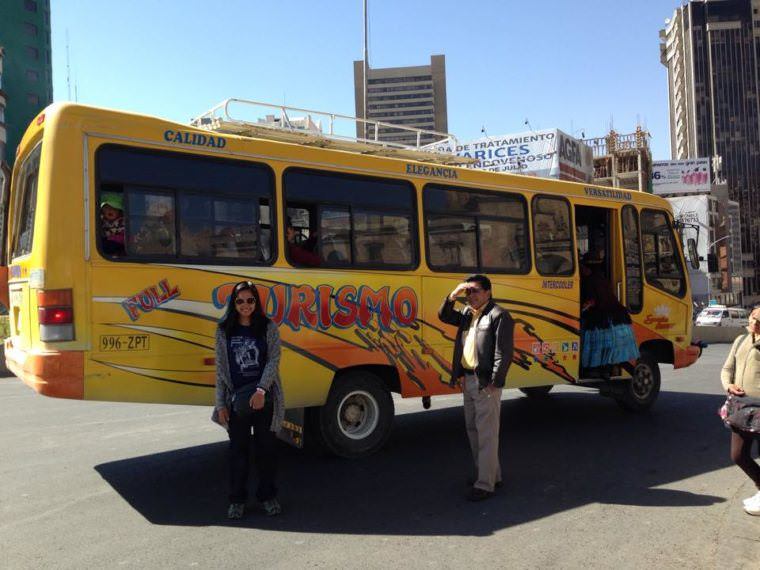 La Paz is a central hub of rich culture and colorful history in South America, with numerous museums, galleries, and cathedrals. We spent a whole day and several afternoons just wandering the streets of the city, enjoying the atmosphere of the decayed colonial buildings, colorful food markets, and vibrant city life.

Witch Market – The local ‘Witch Market’ (or tourist market in reality) is full of interesting craft items, clothing, jewelry, and some slightly witchy stalls offering various crystals and preserved animal parts. You can also buy good luck charms and spells, which incorporate various plant, animal, and mineral parts to represent what you wish for. Perhaps not such a bad idea if you’re planning to ride the Death Road the next day!

The Coca Museum – Everything you might have wanted to know about Coca leaves but were afraid to ask. You’ll learn all about the history of the Coca leaf, some myths, truths, and lies, plus an interesting document translated into many languages.

Killi Killi – Formerly a strategic military point against the Spanish invaders in the 1780s, the hilltop viewpoint of Avenida Las Banderas provides 360-degree panoramic views of the city. 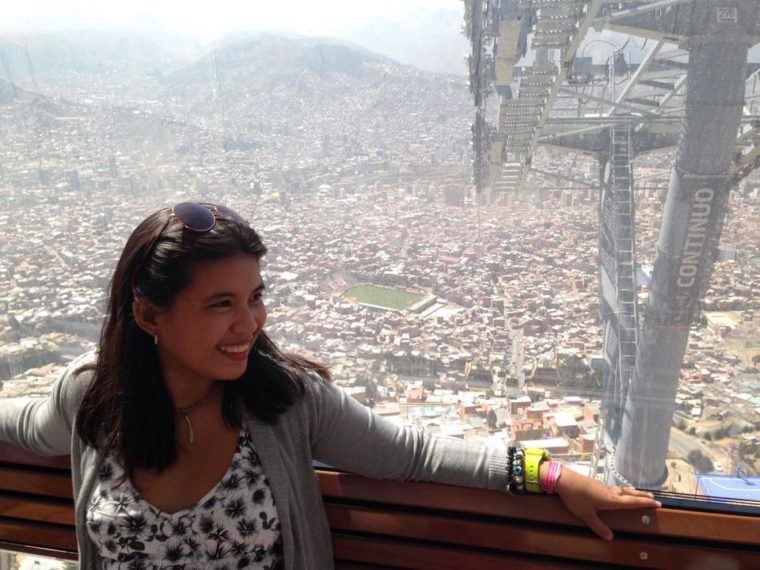 Teleferico – The La Paz cable car system is about 10km long and consists of 3 lines running from the northern-most point of the city, to the suburbs of the south – Some of the best views you’ll find in the city and a great way to travel!

43 thoughts on “A week in La Paz, Bolivia – Adventures, Beers and Breweries!”

Life Inspiration: From Hollywood Life to Hostelling in Santiago, Chile

Behind bars – Inside a female prison in Lima, Peru