We’ve stayed in many hostels on our travels and have met a lot of the owners, who are often foreigners who, while working and traveling abroad, decided to stay and build something of their own. These are the pioneering entrepreneurs who have and still are raising the bar in backpacker accommodation all over the world. We’re always excited to talk to these people, to hear their stories, their ideas, their dreams, and the motivations behind what they’re doing. One such individual is Jon Mascitelli, the founder, manager, and avid surfer behind the awesome Castillo Surfista, a laid-back hostel with the atmosphere of a warm home and a style that borders on the boutique in the heart of Santiago de Chile. Not to mention, Santiago’s only skateboarding dog! We sat down with Jon to find out a bit more about how it all came to be and where it’s all going…

1. Tell us about yourself

I´m 35 years old, born in Los Angeles, California, but never lived in the same town/city for more than 2 years since I was twelve, around the age I started to surf. I went to boarding school in Santa Barbara County CA, studied Journalism in Orange County CA, and studied abroad for two full semesters, in Costa Rica and Australia. Upon graduation, I lingered around Hollywood working as an assistant, thinking I could make it as a screenwriter, but the travel bug remained strong. Living in Los Angeles, all that traffic and chaos – I had never been so miserable. I finally escaped when I was 23, first taking a job as a galley slave on a catamaran in the Bay of Biscay. It was terrifying, but it was the best decision I ever made, and one that finally brought me to reside in Santiago, Chile when I was 27. If you asked me about my hometown I could not answer. I would probably just say California. 2. What was your inspiration behind Castillo Surfista?

Surf culture is known to people around the world for adventure and easy living. I wanted to open a hostel like this in Santiago. Most of our clients are not surfers. With only 25 beds, we receive travelers from all over the globe, backpackers taking a year off, and students in the transition to studying abroad for example. Clients choose us because we offer a relaxing alternative to the confusion and bustle of large “factory hostels” at a good price. Honestly, the most painful process for me is raising prices. I did not open a hostel to become a millionaire. I just wanted to provide a safe and welcoming atmosphere for travelers like me – and I knew I´d be good at it.3. Why Santiago? Why Chile?

I grew up surfing California and could not resist Chile´s extensive coastline. Surfing is still more popular in the USA, but every year I witness Chilean surf culture grow despite its frigid waters. Wetsuits are only getting warmer and lighter, and to most surfers, Chile´s coastline is either a mystery or the best-kept secret in South America. I chose Santiago because it’s a bustling crossroads for travelers and surfers alike. Maybe it’s due to the recent fall of the Chilean dictatorship, but Santiago is a pretty amazing city that’s getting better at an astonishing rate. 4. What were you doing in your previous life? 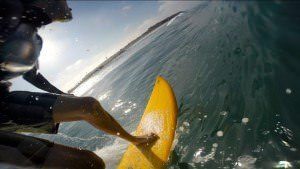 As mentioned I first worked as a Hollywood assistant while trying to make it as a screenwriter. Don´t like to talk about that period. From there I transitioned into galley slave, hostel volunteer, and freelance writer. When I arrived in Santiago I got a haircut, put on a suit, carried an empty briefcase, and acquired a pretty well-paying job creating an English Language Program for a Finance/Risk Consulting company. The idea to open a hostel did not come until my third year in Santiago. 5. We love Duke, can you tell us more about how you ended up with a skateboarding dog?!
Duke´s mom was abandoned on a farm outside of Santiago while pregnant with a litter of puppies. I was a week away from opening the hostel and was originally against the idea of a hostel dog, but an old girlfriend convinced me to take him in. He was two months old when I got him and he slept in a briefcase. Around the same time, I randomly bought a skateboard because it cost only ten dollars and had the American flag on it. It took him a month to learn to skate. I know everyone says this about their dog but Duke is really smart.
6. What about your plans for the future, can we expect any more Castillo Surfistas? Perhaps a surfer hostel on a beach somewhere.
Right now I´m working on different business ideas but none of them currently involve a beach hostel. But that does not mean it will never happen. I think the coast is still a bit underdeveloped. When it does happen it will not be called Castillo Surfista. I´d do a hostel with an entirely different concept and name. I´d take a big risk on my next one. I want to blow people’s minds.
Oh, Castillo Surfista Hostel accepts volunteers – if you love Santiago and planning to stay for a while then you better give Jon a shout-out! They are on Facebook, their Website, or email them at [email protected]!
PS The breakfast is great – waffles, hot chocolate, fruits, and yogurt!!! =)

4 thoughts on “Life Inspiration: From Hollywood Life to Hostelling in Santiago, Chile”

20 Cool Museums To Visit in Amsterdam (and the river cruise!) @Iamsterdam

A week in La Paz, Bolivia – Adventures, Beers and Breweries!