The past few weeks had been quite busy for Jonathan and me. We had to fix everything with S/V Empress as we’re getting closer to sailing. And yes I’m using we— it’s a team effort although he does 99% of the job. Haha. I’m the cheerleader while Jonathan fixes everything (I’m just so lucky to have a husband like him)! I hand him the tools, and I prepare meals for the captain too :p 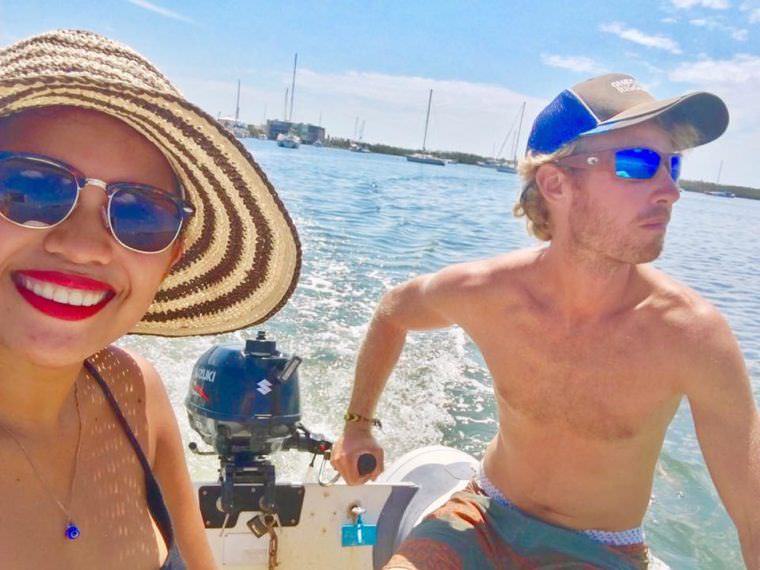 Anyway, despite our busy schedule, we try our best to squeeze in a little date or make a road trip around the Florida Keys. We’re still tourists here, after all. Good thing Toyota USA sent us cars to review– the 2017 Toyota Highlander and the 2017 Toyota Rav4 Hybrid. Surprisingly, our little date and ‘roadtrip’ ended up in a hardware shop to buy things for the sailboat! Haha.

Two cars, same leading brand, and a promising name. But which one stood out? Which one did we like better? 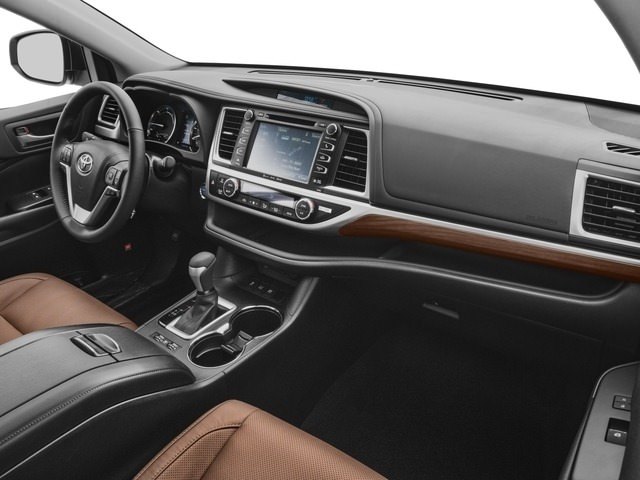 The insides of the look more formal and business-like. It has so much space, perfect for a family. The seats and the steering wheel are covered up in fine leather, the driver’s seat is plush and comfortable– perfect for long drives. Toyota Highlander models possess third-row seating and make room for eight in standard configurations. When outfitted with luxurious second-row captain’s chairs, the Highlander provides peerless comfort for seven. Cargo space measurements for the Toyota Highlander stand at 13.8 cubic feet behind the third row, 42.3 cubic feet behind the second row and an available 83.7 cubic feet with the seats laid flat.  The third-row seats are quite small, just enough for kids, more than that you’ll need to squeeze yourself in– however, the second-row seats can be slid front and back, so it’s not a problem at all. The cargo area is pretty small, and the remedy is just to fold the third-row seats if not a lot of people are in the car. 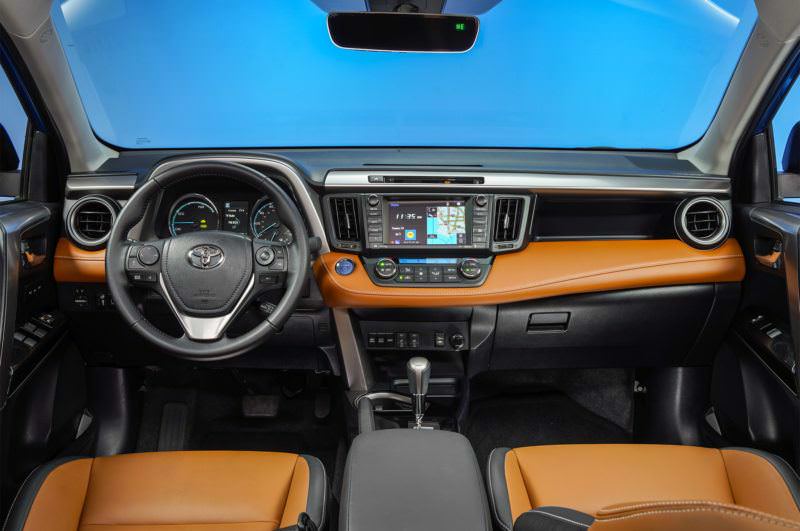 The 2017 Toyota Rav4 Hybrid looks posher than the Highlander. The seats are covered in soft imitation leather and the sides covered in hard and soft plastic. It makes room for five passengers in a spacious cabin that possesses 38.4 cubic feet of cargo space behind the second row. With the 60/40 split-folding rear seats laid flat, the Toyota RAV4 provides a cavernous 73.4 cubic feet of cargo space which makes it perfect for weekend trips. The dashboard is covered with leatherette. The cargo area is enormous which I think is suitable for weekend trips. The spare tire is hidden behind the cargo area which opens and closes neatly. 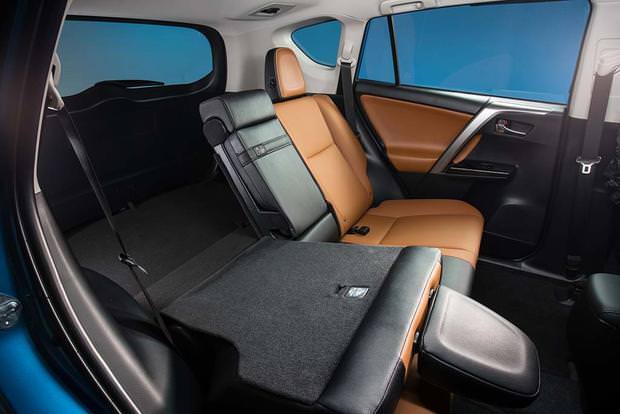 Our verdict: We prefer the 2017 Toyota Rav4 Hybrid’s interior. I find it more appealing and alluring. I prefer posh than being too casual and business-like. I also personally prefer the cargo space in the Toyota Rav4 Hybrid. It’s big enough to load our tools and equipment without having to do anything to adjust the seats. 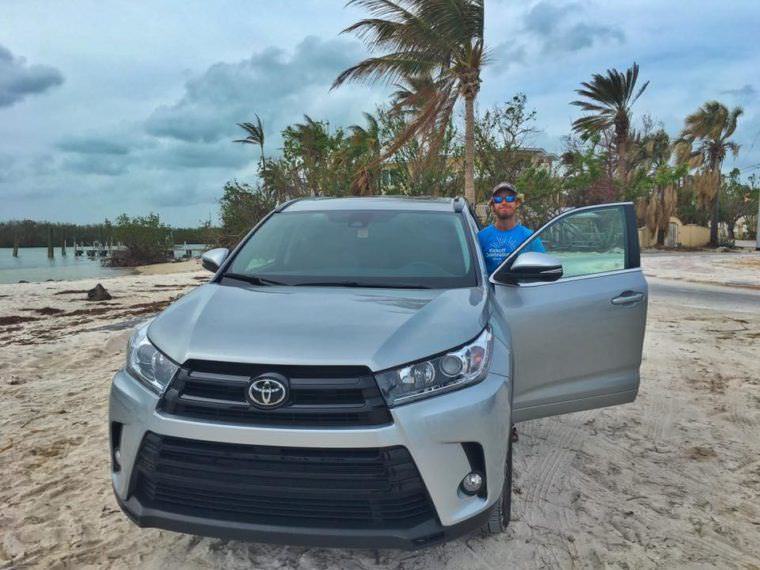 The grill on the 2017 Toyota Highlander’s front extends all the way to the bottom which makes it looks like a tough car. The square rear end is somehow sort of similar to the old models. However, the glass which opens separately from the tailgate is an excellent feature so things wouldn’t go falling in the car when we try to get something, especially when things are pretty much messed up inside. 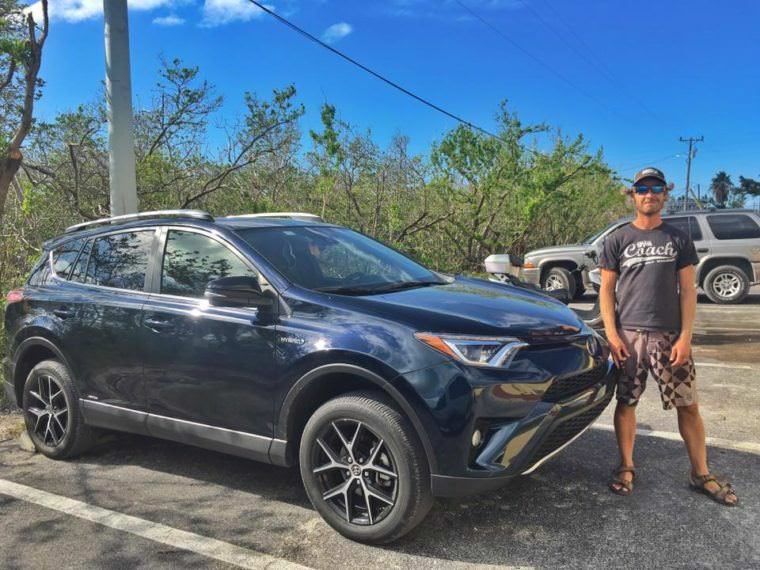 The 2017 Toyota Rav4 Hybrid is one of the Top 3 compact crossovers available in the market. There’s a camera in front, at the back, and on both sides of the car which I think everyone would love. The rear back is quite simple yet impressive. Overall, it is big for a compact car compared to competitors.

Our verdict: We prefer the exterior of the 2017 Toyota Rav4 Hybrid. There’s something about hatchbacks that I like. It looks sporty and posh at the very same time. It gives the Rav4 the attitude that makes it look like the king of the road. 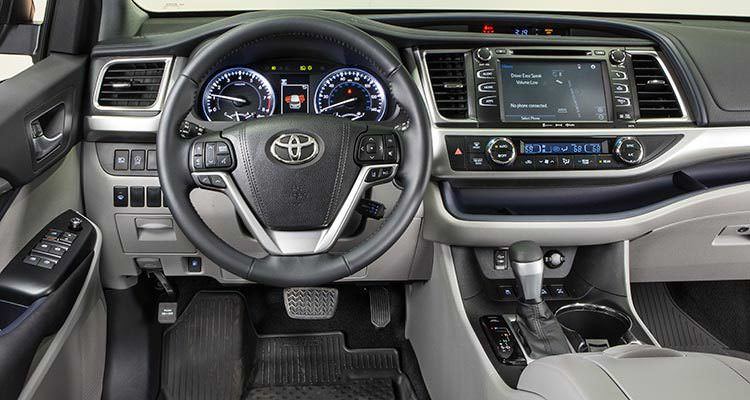 The 2017 Toyota Highlander has a touchscreen navigation and entertainment system, tri-zone climate control, 3 USB ports; stability control button, snow mode, the traditional gear with sports mode. The screen on the driver’s seat has pretty much the same feature as every car: speedometer, multicolor function display, etc. Entertainment control and multifunction display control can also be found on the steering wheel as well as the radar adaptive cruise control and the lane departure mitigation system. Other controls can be found behind the steering wheel. 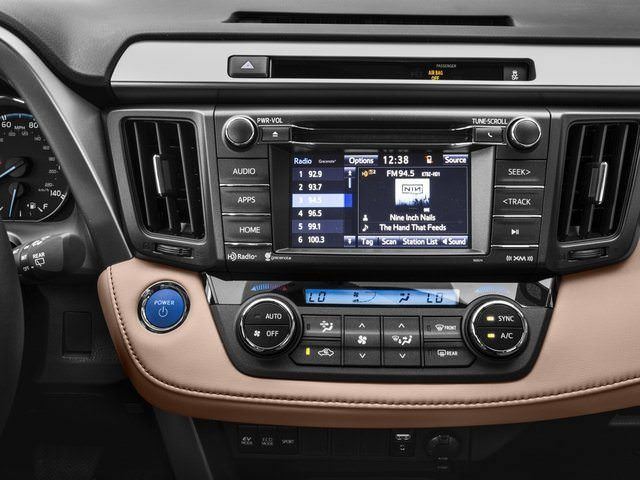 The 2017 Toyota Rav4 Hybrid has the same touch screen monitor– it includes the control for the 360-degree camera, energy monitor which shows you the status of the electric motors. There are also buttons for the EV Mode, Eco Mode, and Sports Mode (and you can feel the difference when you switch those buttons). The shift gear and the driver’s screen is also almost the same as any other Toyota cars, except that it has the Parking Assistance Feature. 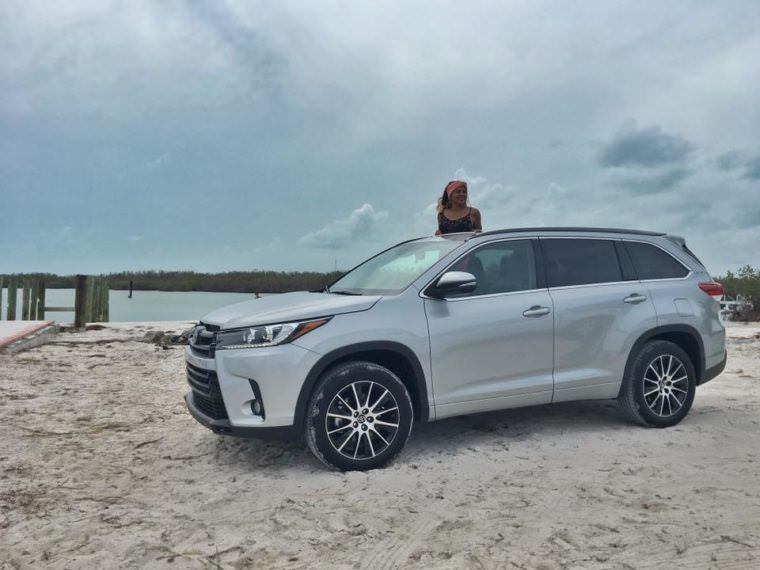 Our verdict: The 2017 Toyota Highlander got our vote for this one! While the control buttons look much better in the Rav4, the control functions in the 2017 Highlander are more efficient. As bloggers, we work hard wherever we may be (even in the car!). So the 3 USB Ports on the dashboard and another one in the compartment between the driver and the passenger seat is a major selling point for us. 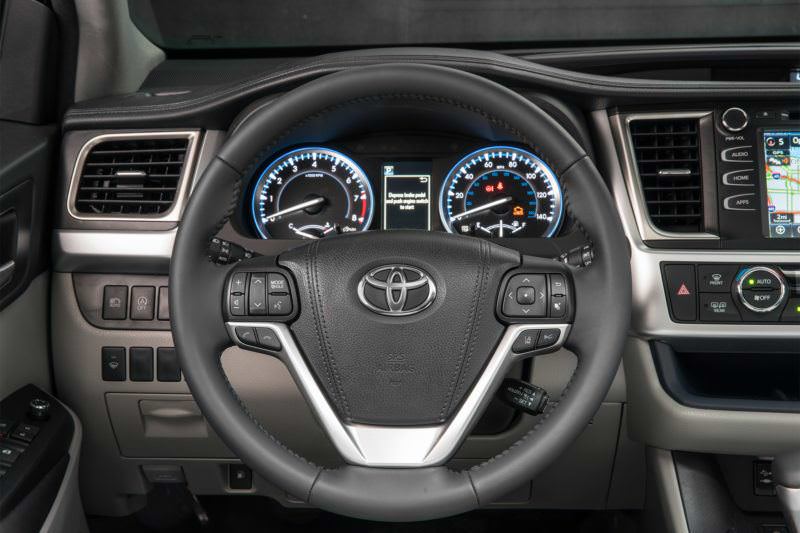 All 2017 Toyota Highlander includes the Toyota Safety Sense P suite of safety equipment– this feature includes a pre-collision warning with automatic emergency braking, lane-departure warning, and adaptive cruise control. It may also be equipped with a pedestrian pre-collision system, which uses a camera and radar to detect objects in the road and prompts the driver to brake with audio and visual alerts. The system will also automatically apply the brakes if the driver doesn’t take action. The XLE trim line will also get blind-spot monitoring as standard equipment. It is also equipped with airbags. It has earned a full 5-star overall crash test safety rating from the NHTSA. 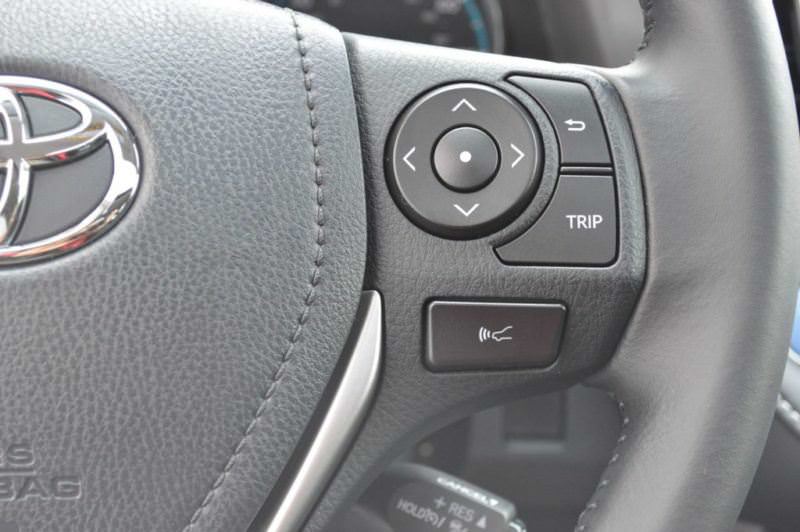 The 2017 Toyota RAV4 Hybrid earned a full 5-star overall crash test safety rating from the NHTSA. The Bird’s Eye View Camera package helps the driver by displaying an overhead 360-degree view of the vehicle’s surroundings while parking or driving at low speeds. It likewise has the Toyota’s Safety Sense Package like that of the Highlander. A backup camera, airbags, antilock brakes, an electronic stability system, and a tire-pressure monitoring system come standard. 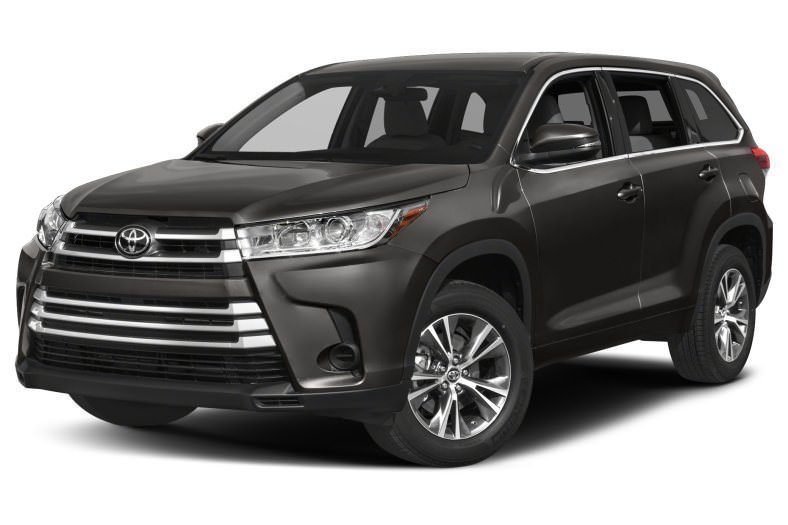 Our verdict: As for this one, I will rely on the data provided by NHTSA. So far, the 2017 Toyota Rav4 Hybrid had one recall and 34 complaints while the Toyota Highlander had two recalls and 15 complaints. I could probably say that both of them are good although there are a lot of problems (major and minor) with the Rav4 Hybrid. So I think that the Toyota Highlander is better on this one! 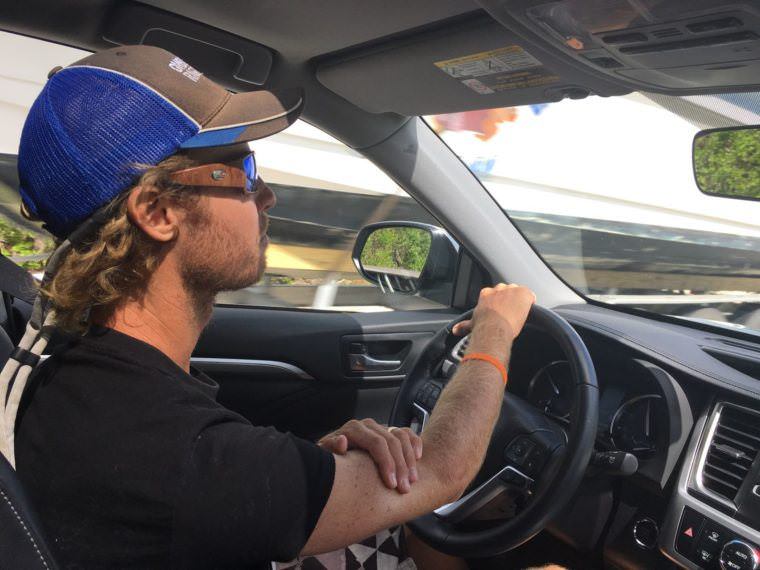 The 2017 Toyota Highlander employ a 185-horsepower 2.7-liter four-cylinder engine that achieves 24 mpg on the highway. When you upgrade to the all-new 295-horsepower 3.5-liter V-6 engine with a Direct-Shift eight-speed automatic transmission, the Highlander LE makes 21 mpg in the city and 27 mpg on the highway. All V6 models (except the LE) will come standard with a new start/stop system to save fuel. It is faster than the previous models, and the brakes bite in fast. Despite being on the 8th gear, the drive still feels smooth. The tire noise and the wind noise is just so-so. The steering wheel is accurate, like any other Toyota model. 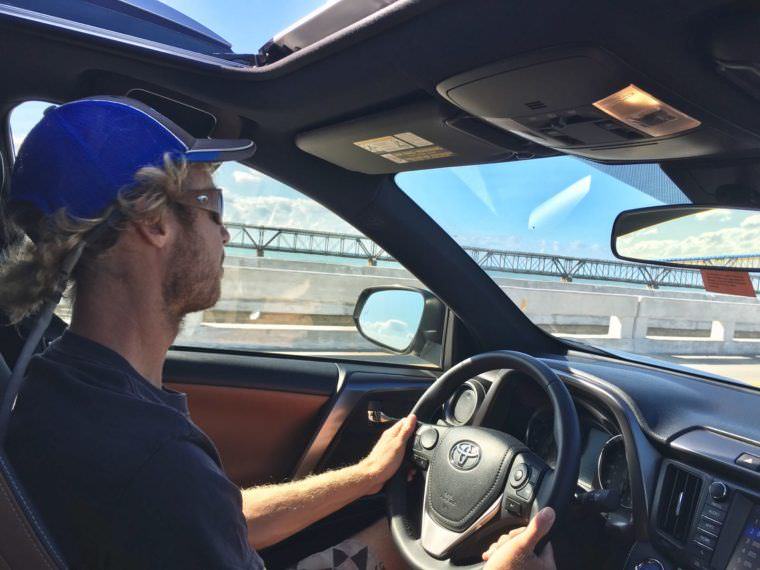 The 2017 Toyota RAV4 Hybrid is equipped with a 2.5-liter Atkinson-cycle four-cylinder engine and a high-torque electric motor to generate 194 horsepower. With a continuously variable transmission, the hybrid Toyota RAV4 makes 34 mpg in the city and 30 mpg on the highway.  The cabin noise is suppressed well compared to the Highlander. It also uses less fuel than nearly every other compact SUV. 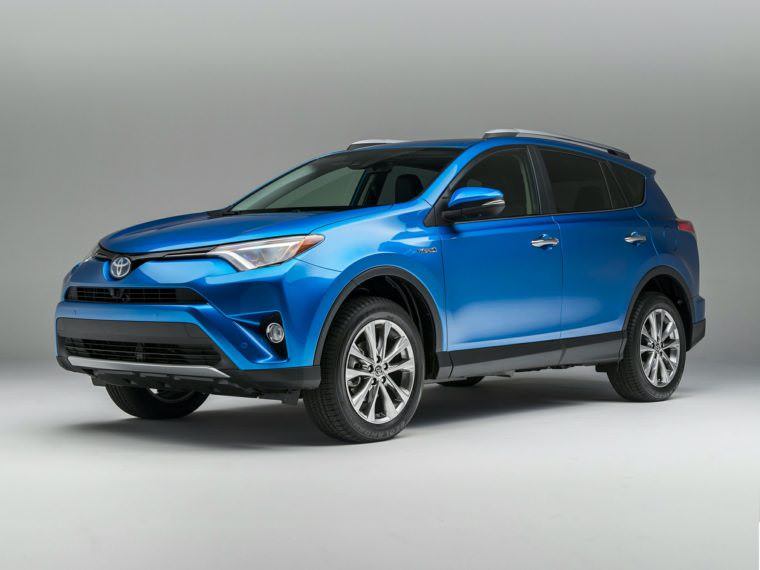 Our verdict: We liked the performance of the 2017 Toyota Rav4 Hybrid a lot better. As per Jonathan, it’s easier to drive it compared to the Highlander. He didn’t need to step much on the accelerator, and the brakes bite in fast too. Not only that, it has less fuel consumption– one of the most important factors for us. 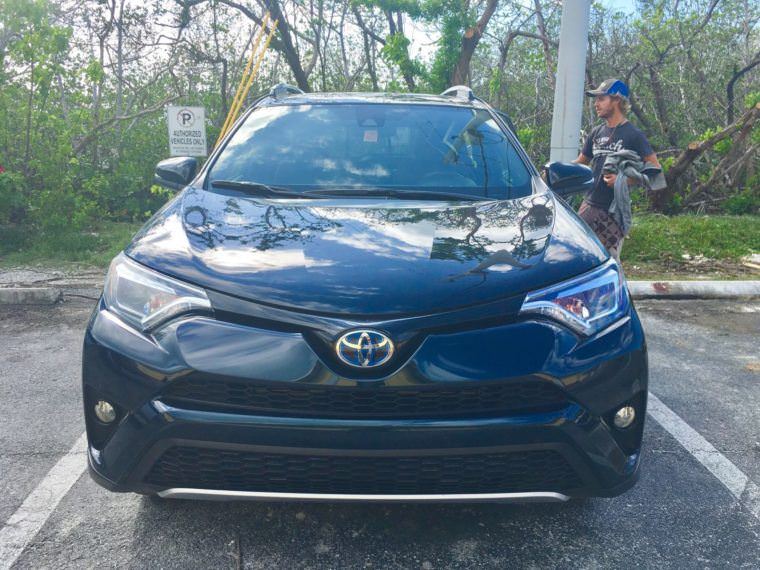 The 2017 Toyota Rav4 Hybrid met 3 out of our five criteria. Considering its lavish/sporty look and its overall performance together with the Toyota Safety Sense feature, this is the car we prefer! We loved everything about it, and given a chance, this will be one of our top picks when we finally decide to buy a car 🙂 What about you? Which one did you like better? 🙂

5 Reasons Why We Keep Coming Back to Hotel Palace Berlin