Orlando, in Orange County Florida, is mostly associated with two things – Disney World and Universal Studios, both of which are of course a huge part of the city, but is a lot more to Orlando than theme parks to draw more than 62 million visitors per year to ‘The City Beautiful.’ The big theme parks aside, Orlando has multiple water parks, wildlife safari centers, indoor skydiving, as well as internationally acclaimed shows like the Cirque du Soleil and the Blue Man Group. There is also a thriving art and cultural scene in Orlando – The Charles Hosmer Morse Museum of American Art; History Museum and Pioneer Village; and the Cornell Fine Arts Museum among many others. Orlando is also a great destination for getting out into nature, exploring and getting your regular dose of adrenaline, with activities like; bi-plane rides; swamp air boat rides, kayaking, jet-ski and speedboat rentals; indoor go-karting; water sports centers; hot air balloon rides; hang gliding; zip-lines…the list goes on and on! Here are some tips for Universal Studio Orlando

Check out some of the cool and cheap tours you could do in Orlando, Florida and Orange County 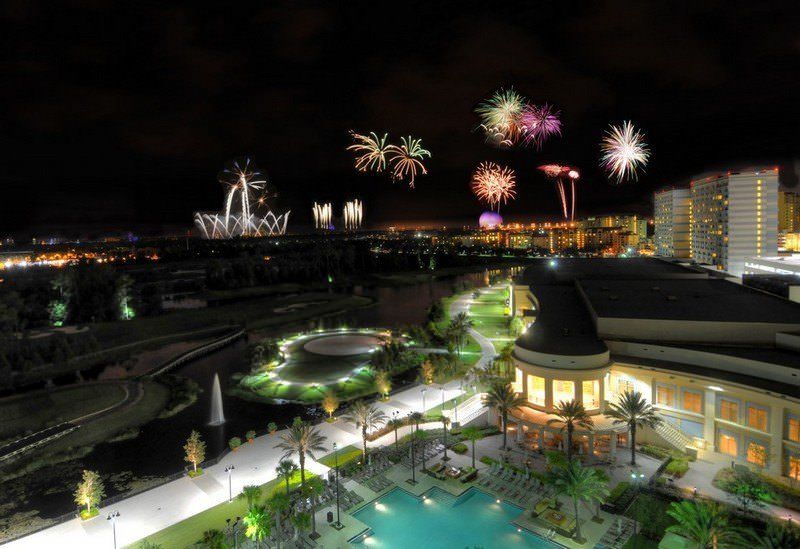 Obviously we were here for the theme parks, that’s a given, but we figured that we should start our three days here with one of Orlando’s newest ‘theme-park-alternative’ attractions.

I-Drive 360 is a newly opened entertainment complex which joins many already-established attractions along International Drive. As well as shopping and restaurants, there are three main attractions to get involved in: Madam Tussauds; Sealife Aquarium; and The Orlando Eye. 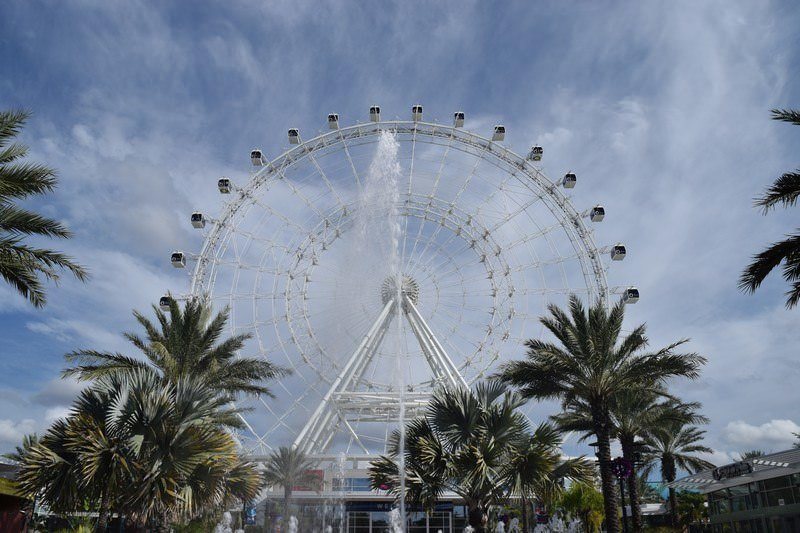 We went for Madame Tussauds first, as we’ve both always wanted to see the original one in London. The waxworks were amazing and they are still made in the same way as Madame Tussaud herself made them when she first opened Madame Tussauds in Baker Street in London in 1831. Featuring celebrities and important figures from around the world and from various periods in history, the attraction is very interactive – there are no ‘no-touching’ rules and  you’re even invited to pose with the figures, hold hands, pat the on the head, anything you like really (within reason!) We even met the British Royal Family! 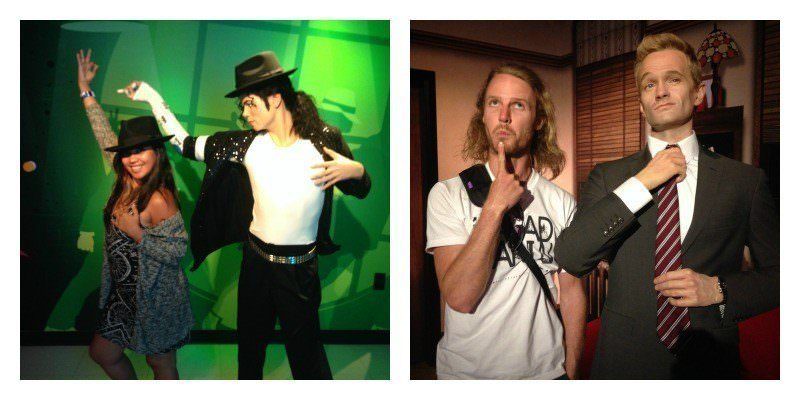 A completely indoor aquarium built to ‘turned the traditional aquarium observation on its head.’ Apparently containing around 500 sea creatures in the glass-walled tanks, including colourful fish, seahorses and jellyfish, turtles and sharks, all of which can be views in 360 degrees in the underwater ocean tunnel.

The 400 foot tall Orlando Eye is a giant rotating observation wheel with closed passenger capsules, giving 360-degree views of the surrounding area. This was an amazing way to orientate ourselves and we managed to spot the Disney Parks and our hotel, the Waldorf Astoria Orlando before we even got there! Even the wheel is an attraction in itself, as from inside the capsule the impressive work of art and engineering unfolds around you, creating a constantly changing view. 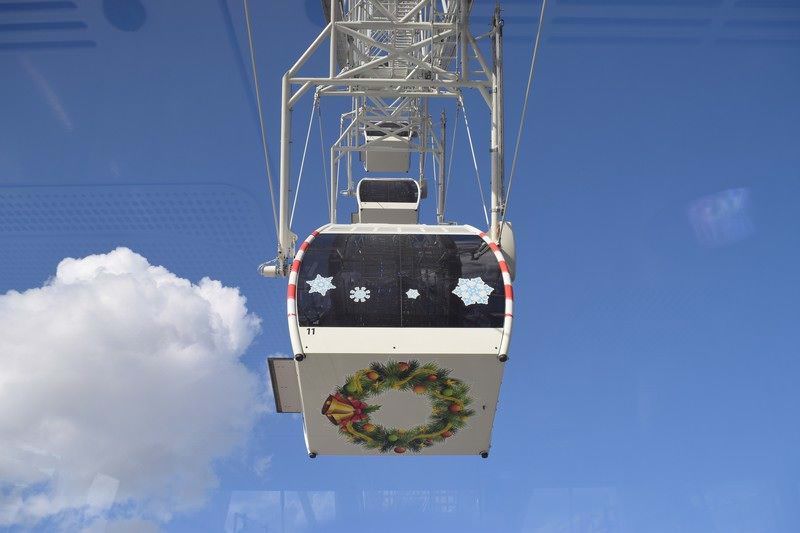 Arrival at the Waldorf Astoria Orlando

From I-Drive 360, we headed to our hotel for the next three days – The Waldorf Astoria Orlando! The Waldorf Astoria is the quintessential luxury Disney World Hotel (although not a part of Disney itself). We arrived at the grand entrance of the hotel, had our bags unloaded and the car conveniently vanished all with seamless, fluid motion. We pushed open the story-tall wooden doors and were greeted inside by the distinctive lobby clock, standing in centre position beneath the elaborately patterned domed ceiling and chandelier. 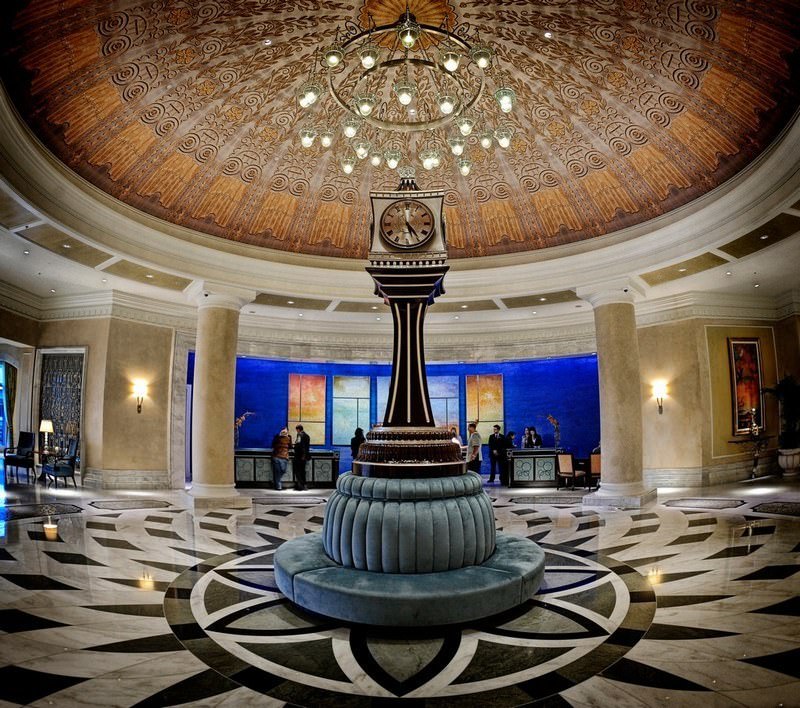 We checked in a took the elevator up to the 11th floor to our King Deluxe Suite, which had amazing views all the way across the Bonnet Creek Nature Preserve. The separate living room was very large with a dining area, a comfortable living room with wide screen TV and a full height window at the end. The king size bed was covered in thick, luxurious layers white cotton and down. That evening we had cocktails and a charcuterie board in Peacock Alley, the living room style bar in the centre of the hotel, perfect for relaxing and talking in a casual environment. 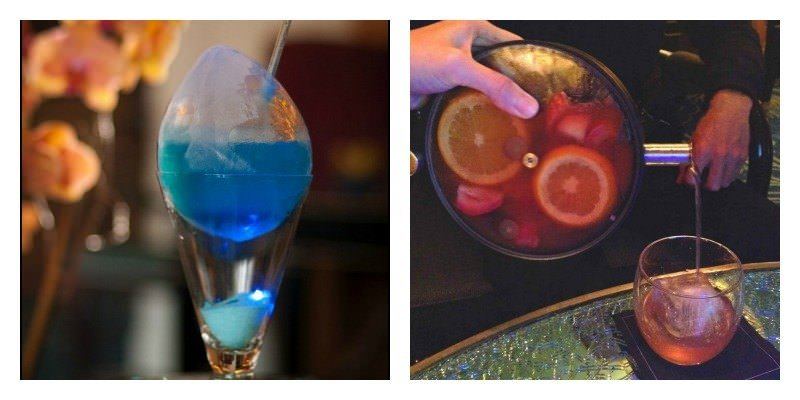 Two of the cocktails we tried were Waldorf Astoria Orlando house specials – The Peacock Egg and the Through the Looking Glass – both of which turned the act of drinking into a fine art, hitting almost all of your senses with their striking designs and ingenuity, expertly blended tastes and the tactile materials onf their construction. The hotel has two main pools, one a formal signature pool and the other, a zero entry pool suitable for children. The spa, which is open to all overnight guests has a spa Jacuzzi and steam room, plus a range of treatments using their own range of locally sourced ingredients, like honey, which are infused into their own unique skin treatments and products. 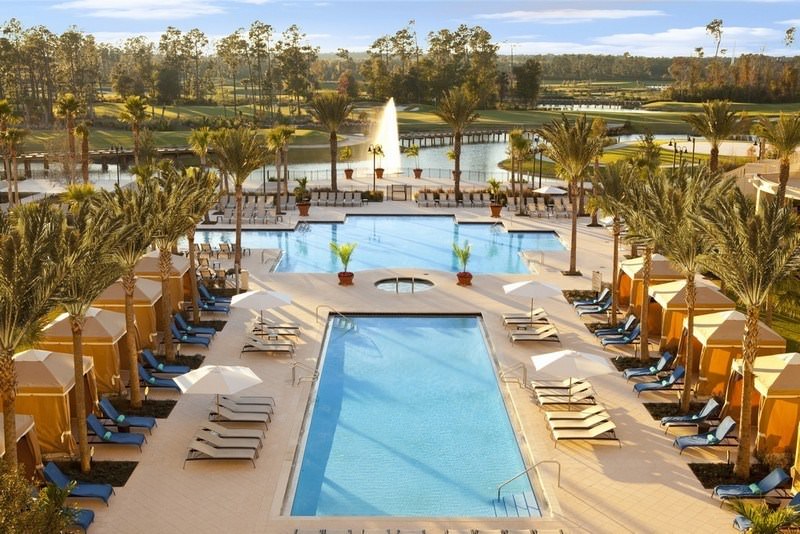 You can check details and latest rates on Agoda or Expedia or visit their website directly at Waldorf Astoria Orlando. Don’t just take our word for it though, check out their reviews on TripAdvisor.

I have wanted to visit Disney World Orlando ever since I was a child and I finally had the chance at the age of 27! Did it matter that I’m not a child any more? Was I just too old to Disney by the time I had the chance to go? Absolutely not! Disney World can be enjoyed by adults and young couples just as much as by children. You can go on rides together, scream together, laugh together and act like big, overgrown kids together!

Check out some of the cool and cheap tours you could do in Walt Disney World.

Magic Kingdom is the fairy tale side of Disney, with 6 different lands – Adventureland, Frontierland, Liberty Square, Fantasyland, Tomorrowland and Main Street, U.S.A. Being grown-ups, we stuck mostly to the rollercoasters, like the Big Thunder Mountain Railroad, Space Mountain and Splash Mountain. We spent a couple of hours in the Magic Kingdom because we only had one day to make the most of our Park hopper pass. Kach couldn’t pass up the chance to have a photo with Mickey Mouse and Cinderella though!

Check out some of the cool and cheap tours you could do in Magic Kingdom Park. 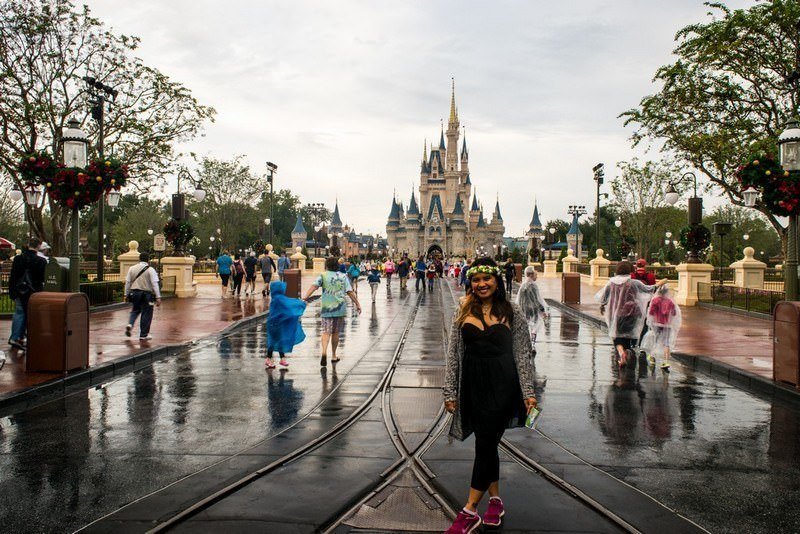 Themed on the old glory days of California as it used to be, Disney Hollywood Studios is a movie and TV show themed park full of rides and show based on blockbuster movies, television, and theatre. There are plenty of thrill rides, we went on the Hollywood Hotel Tower of Terror and the Rock ‘n’ Roller Coaster. The Indiana Jones stunt show is also a huge it, with an Indiana Jones stunt double jumping and falling from buildings, rooftops, even a plane, all right in front of your eyes.

Epcot was a great park for adults, as it’s Disney’s technological center, with cool displays, interactive games. Epcot is a much more experiential and sensory experience, with rides like Soarin’, a hang glider themed ride over the most breathtaking views in California, and Mission Space, an intensely realistic simulator which takes you to the edge of space and your stomach! Epcot is also the best place to end your day, with the nightly IllumiNations: Reflections of Earth light and fireworks show.

Check out some of the cool and cheap tours you could do in Epcot Theme Park. 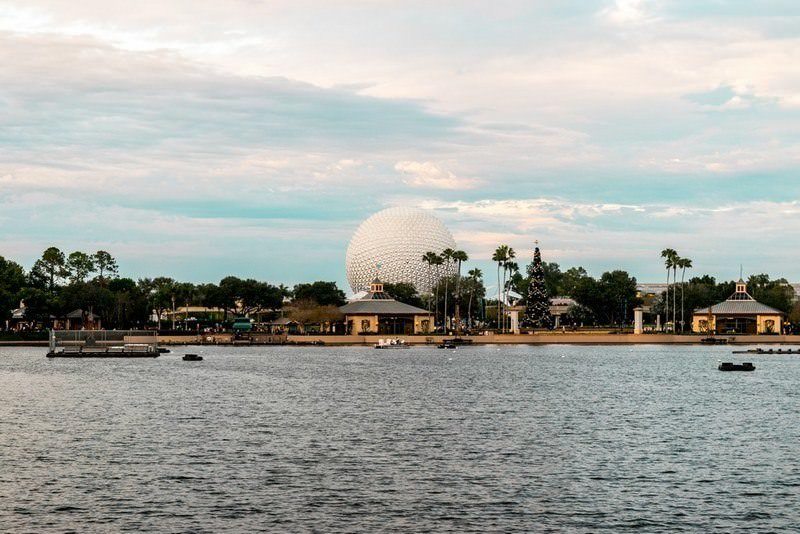 Check out some of the cool and cheap tours you could do in Universal Studios Orlando. 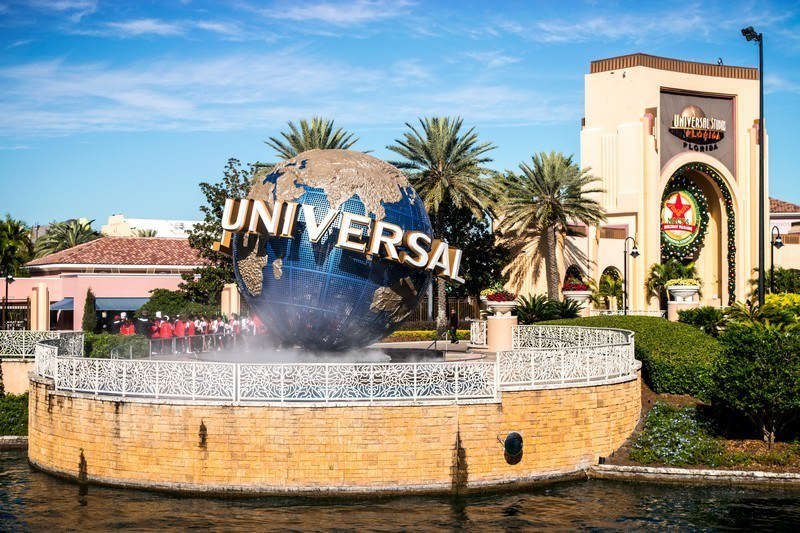 Luckily we had the Universal Express Passes included with our tickets, which helped us to speed through the lines a lot faster, then when even that line was too long, we used the single rider lane. Our favourite rides were the Harry Potter themed roller coaster simulators, which took you right into the movie with 3D cinema, rollercoaster, simulation, then some real fire and water for good measure. We also watched the Grinchmas Who-Holiday Spectacular at the Universal’s Islands of Adventure. 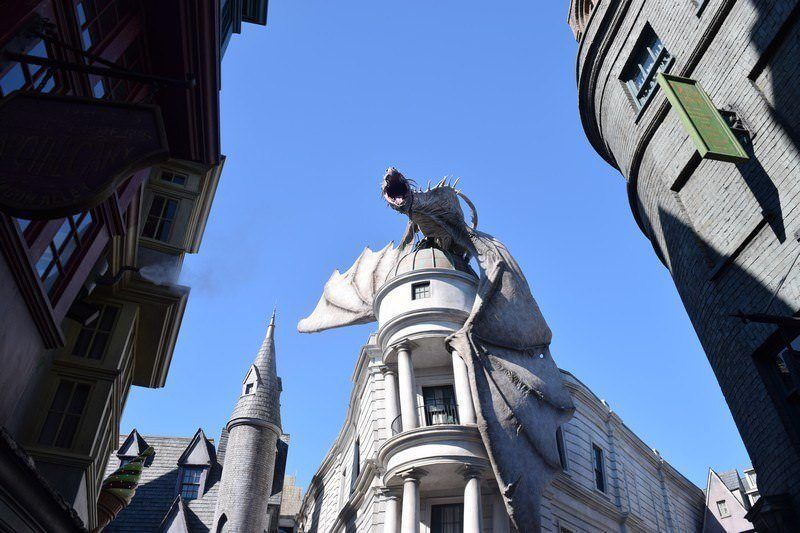 Check out our full Universal Studios for Adults article to see exactly what we did!

Winter Park is a suburban city in Orange County, Florida, originally founded by wealthy businessmen back in 1882. Since the city was founded and then continually developed with strict guidelines on planning and architectural styling, the city has retained its classic feel, tree-lined streets and shaded sidewalks where people come to enjoy fine restaurants, cafés art galleries and golf courses. Winter Park is also home to the world’s largest collection of Tiffany Glass at the Charles Hosmer Morse Museum of American Art. All in all, Winter Park is an off-track destination or day trip for those looking to get out of the big city and its theme parks for a little while to discover something new.

We visited Winter Park to enjoy a Winter Park Scenic Boat Tour through three scenic lakes and a series of man-made canals. On Lake Oscoela, just a short drive from Orlando, the hour-log tour takes visitors through three lakes and two narrow canals, where cranes can be seen catching their prey, all in the natural setting of palm trees, cypress trees, lush ferns and flourishing sub-tropical flowers. A beautifully peaceful way to wrap up our time in Orlando and our 3 week Florida road trip!

Note: This trip wouldn’t have been possible without the help and support of Visit Orlando for our itinerary in Orlando, Visit Florida, the official tourism office of Florida in Tallahassee and especially Ms. Summer Gilhousen, who arranged the whole trip and coordinated with all the local tourism boards, private companies for our sponsored hotel stays, tours and car rental. Thank you!

What to do when you’re stuck in one place