When we started planning for this trip last November, we only planned our travel itinerary for 2 weeks – exploring Peru with Peru Hop and then crossing the border to Bolivia by the 18th of December as my visa was about to expire. We arrived in La Paz and were accommodated and looked after by our new friend, Remo, from Adventure Brew Hostel. After La Paz, we had no plans, other than to travel south through Salar de Uyuni and from there enter Chile to reach Patagonia, by whatever route and transportation we found.

To be honest, most of our accommodation is sponsored, but we always find the owners to be incredibly friendly, warm, and generous, to everyone, not just people reviewing them. Our tours are often exchange deals, so we only pay for our transportation and food. We’ve been to a lot of Cities in Peru, Bolivia, and Chile during these last five weeks of adventure and the experiences we’ve had have been overwhelming! We have to work and write though while on the bus or in the hotels. We will talk more about everything we’ve done in another article as this time I want to talk more about our unplanned journey to Patagonia, Chile.

After staying for five wonderful days in Santiago, we decided to take an overnight bus to Puerto Montt, the southernmost city before Patagonia, and from there take a ferry straight to Puerto Natales, but it didn’t turn out quite how we were expecting. Chileans are more organized than much of South America and you have to book everything in advance, so the ferry was full! We weren’t even intending to stay in Puerto Montt for a night and the only other way to go to Patagonia is to fly or take the bus via Argentina. I couldn’t enter Argentina as I hadn’t processed my visa and flying would eat up all of our budgets. So, we decided to wait in Puerto Montt for cancellations and Jon contacted the marketing manager for Navimag in Santiago (the only ferry company going to Patagonia). We didn’t have a place to stay, so Jon walked into the most expensive hotel in town, Hotel Manquehue, to try and speak to the manager for a possible discount. He was an awesome guy and he loved our site, so he gave us one of their best rooms for 2 nights for FREE.

After several days, Marcelo, the marketing manager of Navimag contacted us with the great news – there was a free slot for us on the ferry so he was giving it to us for FREE. (Well, these things aren’t FREE as we have to write an honest review and article for them, plus promotion through all of our social media…but still!) The ferry was going to take us from Puerto Montt to Chacabuco, two days to the south. On both nights, we went to sleep in one world and woke up in another, the changes in the scenery here are both frequent and dramatically stunning in equal measure. We only dragged ourselves away from the windows or top deck to sleep in the small, comfortable rooms, with en-suite bathrooms, or to sit down for meals in the canteen. The food was plentiful and really good, far better than what we expected to be served on a ferry!

But you know what the highlight is so far? It’s not all about getting FREE stuff but the genuine kindness of the people who don’t even know you!

We were on the ferry to Chacabuco for two days, which is a pretty confined space, so obviously we ended up meeting a lot of new people. People just talk to each other randomly, mostly about travels – “Where have you been? Where are you going? Where are your from?” All the usual stuff. We met this lovely Chilean girl who turned out to be our roommate, she taught us a little Spanish and looked after me when I was feeling seasick. We’ve met this old Chilean couple who’s been married for 46 years and made me realize that true love still exists… and the best so far was meeting a Chilean holistic beef farmer, traveling with his son, Mateo, and their two dogs.

“It’s true that the richer the person is the more humble they become!” 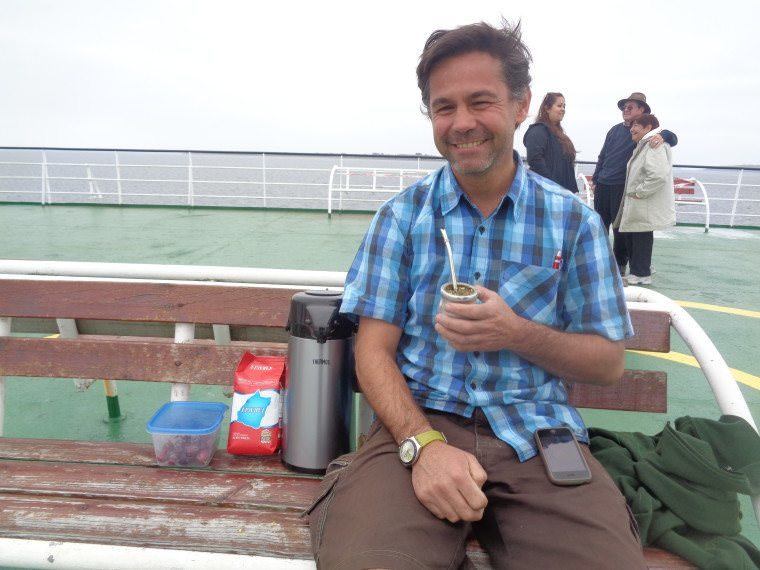 Juan-Pablo and his son Mateo were traveling from Santiago back to Coyhaique with their 2 dogs to visit their family farmland. We first met Juan when I asked him if I could take his picture drinking ‘Mate’ (a famous tea drink in South America), sitting next to a massive thermos! Later on, Jon was talking to him about farming and sustainable living and he invited us to stay at their house if we hadn’t already figured out our next move. The ferry docked and we were on our own, we had no plans in mind and Jon really wanted to see the farm, so he called Juan to accept his offer. A few hours later, this man came up and picked us up in his car, brought us back to his home, offered us wine, and invited us to have an awesome dinner.

We’ve now spent four nights in his house, with awesome food and wine, being toured around his farm and the countryside during the day. He’s been incredibly generous and helpful in every way possible. Who would believe that someone would do that these days; meeting two random strangers in your without knowing them? Jon must look less like a serial killer than we thought! But that must be life – we should believe in goodness! This guy doesn’t need us to promote his farm or anything like that, but just about the kindness of the Universe.

Now, we’re just resting after exploring the farm, did I mention that it’s 1000 hectares of land, with valleys, lakes, forests, and rivers…it’s incredible!  Time for me to practice my Spanish with Mateo before we leave Coyhaique tomorrow after 5 days of exploring their Hacienda. Most probably hitchhiking to the South as most bus companies have to enter Argentina unless Jon will put me in the box and smuggle me.

Do you have any stories of genuine kindness and if you were in their position would you adopt 2 random backpackers?

3 thoughts on “Kindness and Surprises on the Road to Patagonia”