Ever had the urge to throw a tomato at a complete stranger and live to tell about it?  Or dance 24 hours without a care in the world? Shake off your conventions, pack your bags, set your senses on overload and get ready for one helluva of time with our top 10 festivals around the world.

Whether celebrating ancient revered traditions or just being wacky for the sheer joy of it, these yearly festivals are great reasons to travel or play hooky from work.  From Spain’s La Tomatina festival to Rio’s famous Carnival, celebrations of electric chaos pulsates with community spirit and you’ll be hard-pressed to not get caught up in the festivities!

The only fear here is having too much fun. So enjoy and start checking off that bucket list!

What:  Probably the most famous of world festivals, the addictively chaotic Rio Carnival is an annual 5-day celebration of unbridled energy, passion, and pride!  With over 200 neighborhood samba schools in attendance, it’s a massive parade of elaborate ensembles and choreographed story telling.  Carnival marks the beginning of Lent, which begins on Ash Wednesday.

When:  The festivities start 5 days before Ash Wednesday, which marks the beginning of Lent. 2015 dates have just ended.

Why:  Why not?  With over 2 million revelers per day, Carnival is a euphoric cacophony of beautiful people, costumes, samba, and more feathers than you can count.  Like an epic citywide flash mob accompanied by floats, the Rio Carnival can never be imitated and has to be experienced firsthand.  And unlike most parades, everyone is welcome to dance and join in on the procession.

What: The original tomato wars, La Tomatina has a sordid history of civil disobedience, and was eventually recognized in 2002 as a “Festivity of International Tourist Interest” by the Secretary Department of Tourism. Despite all the origin stories you may come across, La Tomatina is just a fun weeklong festival culminating into hour-long utter destruction of all things tomatoes.

Where:   Buñol– Spain, 38km from Valencia

When: Every Last Wednesday of August

Why: Besides fulfilling that pre-adolescent need of being part of a massive food fight? I could tell you it’s because La Tomatina is a time-honored tradition, or that the citizens of Buñol revere it, but I would be lying.  La Tomatina is just pure unadulterated PG fun!

What:  A historical tradition of Venice since the 12th century, the celebration suffered a series of fit and starts, to eventually becoming recognized in 1979 as a celebration of Venice culture. Originally, a night of Libertine indulgence, the 12 days of festivities have now evolved into a surreal reflection of days long past filled with nights of dancing, lavish costumes, and Venetian carnival masks.

Where: Venice, Italy, with festivities concentrated at the Piazza San Marco

When: Beginning two Saturdays before Ash Wednesday. The Carnival of Venice ends with the beginning of Lent.

Why: Party like it’s 1899! Ok, that was a tacky Prince reference, but where else can you celebrate for almost 2 straight weeks in full costume and not get arrested? Venice is naturally a gorgeous city, but add in a citywide masquerade ball, and a dash of historical reference and you have all the reasons you need to visit. 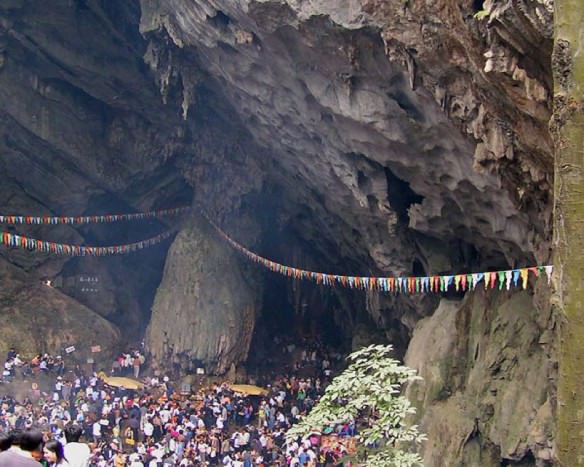 What:  Situated in the limestone Huong Tich mountains, the Huong Pagoda, also known as the Perfume Pagoda in English, is the fulcrum of one of the most important Buddhist festivals in Vietnam.  For an incredible 3 months, hundreds of thousands of pilgrims, by foot and by boat, embark on a spiritual journey towards Huong Tich Cave in search of blessings of love, prosperity, and even fertility.  And for the young at heart, the festival is also known as a good time for romance and courtship.

Where:  My Duc District, 60 kilometers southwest of Hanoi

Why:  If the serene boat rides along the breathtaking Yen River aren’t enough, the festival is a once-in-a-lifetime opportunity to peek behind the curtains and experience firsthand the spiritual life of the Vietnamese people.  With amazing local delicacies, shows, and activities, amidst the backdrop of apricot flowers and Buddhist temples, you might end up never leaving.  Who knows, maybe some of that good luck might also rub off on you. 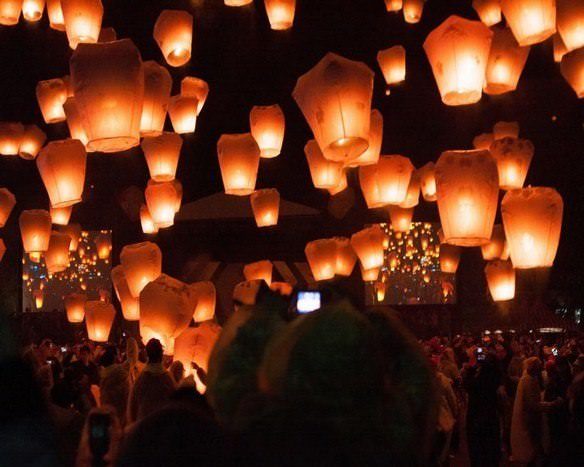 What:  Once a system to notify villagers that the bandits had left the building, The annual Sky lantern festival in Pingxi Taiwan, has now grown to symbolize the collective hopes, and dreams for the New year. Participants scribble their innermost desires onto paper, or even silk lanterns, sending them off to be embraced by the night sky.  With over 80,000 in attendance, the Pingxi Lantern Festival is easily the most recognized Lantern Festival celebration throughout Asia.

When: Usually between February and March

Why:  With an astounding 100,000 + lanterns floating into the sky, you’re really not going to see this anywhere else.  The Pingxi Sky Lantern Festival is a visual bonanza.  A surreal experience of hopes and aspirations manifested. And, if you’re anything like me, you might want to send up a few lanterns for good measure! 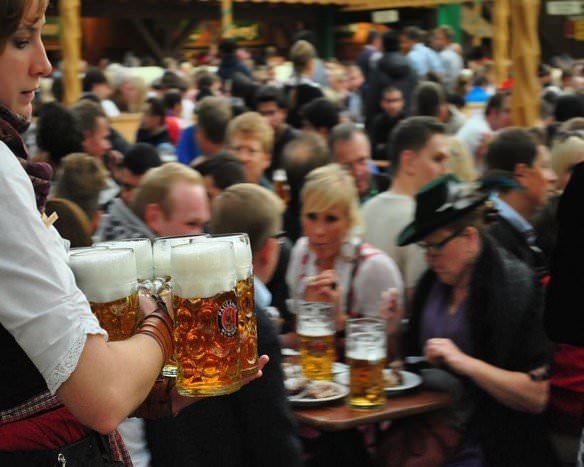 What: An important tradition of Bavarian culture since 1810, the Oktoberfest has transformed over the centuries into the world’s largest fair.  Boasting over 80+ rides, 14 extravagant beer tents, and more food than you can eat in a lifetime, the festival warrants the estimated six and a half million visitors that come every year.  The festivities are between 16 to 18 days depending on if the first Sunday of October falls on the 1st or 2nd.

When:  Last 2 weeks of September until the first week of October 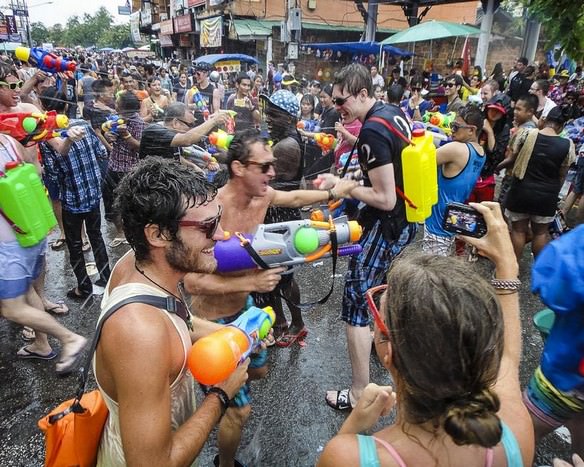 What:  Also known as Thai New Year, or the Thailand Water Festival, Songkran in Thailand has evolved into 3 days of chaotic no-holds-barred water fighting. The tradition is that water, with its cleansing and rejuvenating effects, washes away the challenges of the previous year. But what was once a sprinkle has now been replaced with 45 pounds per square inch of water shot from the end of a super soaker!

Where:  Throughout Thailand with the largest in Chiang Mai, Bangkok, and Pattaya,

Why: This isn’t your typical backyard water fight: this is urban warfare where the biggest water gun wins! Although there are certainly benefits to being able to launch a water balloon at unsuspecting strangers, the Songkran water festival is also an opportunity to observe Thai tradition. Water brings new begi…who am I kidding…it’s about the water fight! 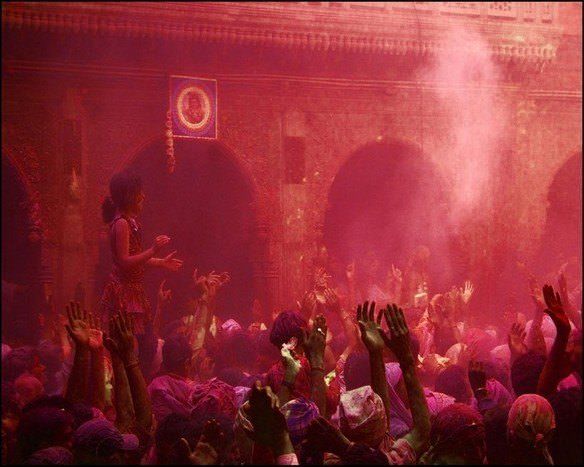 What: An ancient Hindu Festival with deep cultural roots, Holi is a symbolic celebration of the victory of good over evil, and by extension, the end of winter, and the beginning of spring. Following the burning of Holika (destruction of evil), Holi begins as a day of unrestrained dancing, singing, and eating.  Bystanders and participants alike are bombarded with colored powder or colored water, earning it, the ubiquitous name, “the festival of colors”.

Where: Although celebrated throughout India, Northern India such as Delhi, and Jaipur, are the most energetic.

When: The last full moon day of the lunar month, which is usually in March

Why: Social conventions be damned! How often will you have the opportunity to party side by side with elephants, or dance with wild abandonment while participating in a turban tying competition? And if that’s not enough, ambush someone with a fistful of color powder! 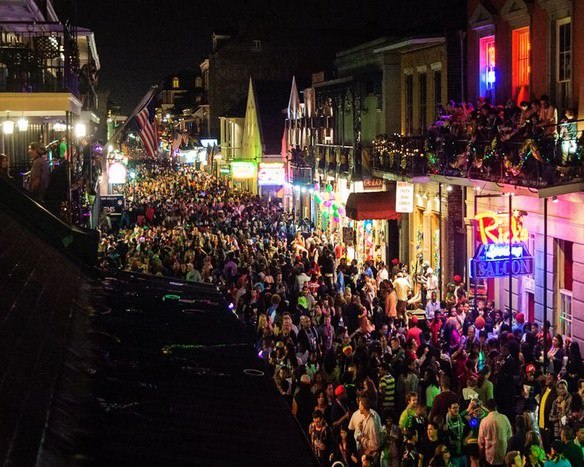 What:  A French Catholic tradition, and now America’s version of Carnival, Mardi Gras is one part masquerade ball, one part parade, and one part pub crawl.  To celebrate the beginning of Lent, over 50 different parades (called Krewes) route through the city in an all-out street festival.  In the final weekend up to “Fat Tuesday,” an exciting madness embraces the city as costumed and inebriated revelers party throughout the night.

When:  Usually in February or March, Mardi Gras falls on a different date every year.  Festivities are at their peak during the 5 days leading up to Fat Tuesday (the day before the beginning of Lent).

Why: Ever get that feeling where you wish the party never ends? In New Orleans, it never really does.  After spending the day dancing and parading with your favorite Krewes, you can don your mask and beads and then mosey on over to Bourbon street to continue your evening libations. And if you still have energy the next day, get up and do it all over again! 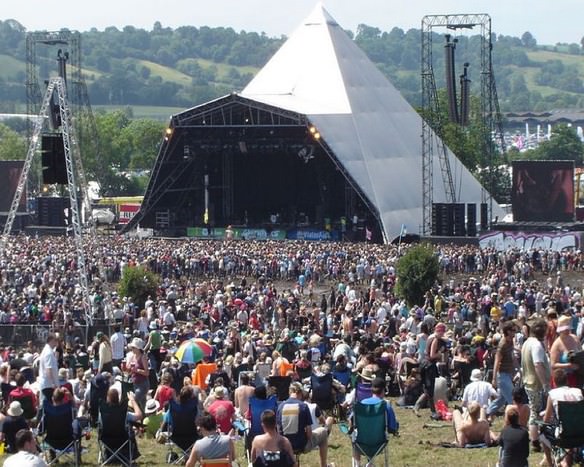 What:  The largest music and performing arts festival ever, the Glastonbury Music Festival, is the predecessor for all imitators that have come after it. For 5 days, Pilton, Somerset plays host to an eclectic mix of contemporary music, poetry, comedy, cabaret, theatre, crafts and even children’s entertainment.  With music played on over 100 different stages, and approximately 175,000 in attendance, the Glastonbury Music Festival is still the grandest of all outdoor entertainment.

When: Usually in June

Why:  Unless you hate music, comedy, theatre or entertainment in general, this is certainly a worthy addition to your bucket list.  Think of it as 5 days liberated from the shackles of the “real world” where you get to camp out with like-minded, free spirited individuals.  Social labels need not apply here, as the Glastonbury festival is a social hodgepodge of nationalities, creeds, ages, and lifestyles.  Truly an experience you’ll never forget.

Hi, I’m Carey, a writer at Blaze Your Adventure. I’m an aspiring scuba diver, novice Spelunker, and avid adventurer; I have a penchant for getting lost with an established track record for choosing the worst places to eat.  With a healthy aversion to staying in one place for too long, I am the ceaseless wanderer and explorer.  I recently traded in the suit for a backpack, and am now pursuing to live a life of travel.  I travel to learn, I travel to live and I travel in search of the epic adventure.

6 Adventure Trails in the Smoky Mountains