I took a taxi for the first time in Europe. Might not be a big thing for others but not for me. I had tried to avoid as much as I could to ride a taxi in Europe as it’s definitely out from my budget as a ‘thrifty’ traveller. So there’s one city in Europe, in The Netherlands, to make it more précised, which made me finally convinced to experience a taxi ride – in The Hague. Luckily, it did not rip off my budget that much as my destination is not that far from the city centre; it was just me who’s never been good in direction. I was in the taxi for about five minutes only. How stupid am I? So where my destination was? At The Hague Teleport Hotel which interestingly located in the industrial part of the city. It’s a new building that not all travellers might consider to stay for their visit in The Hague. Then let me introduce The Hague Teleport Hotel more to convince you why this chic hotel can be your best accommodation in the ‘Royal’ city of The Hague. 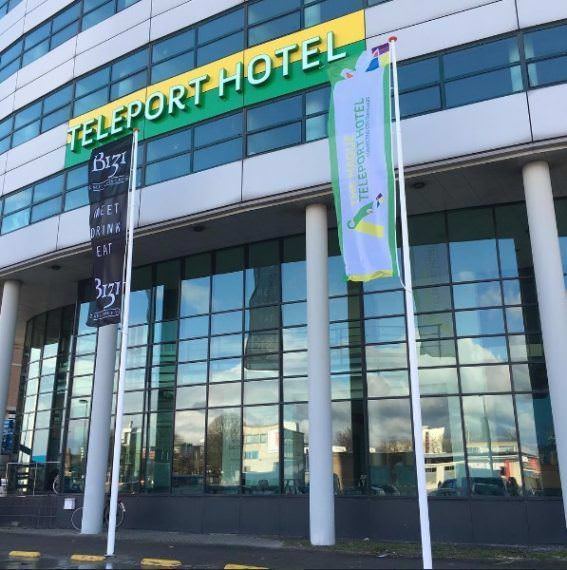 Watch the video to know more or simply visit their official website. If you want to find great deals, check Booking.com or read their reviews on Tripadvisor.

With three nights, I enjoyed the double studio room of The Hague Teleport. 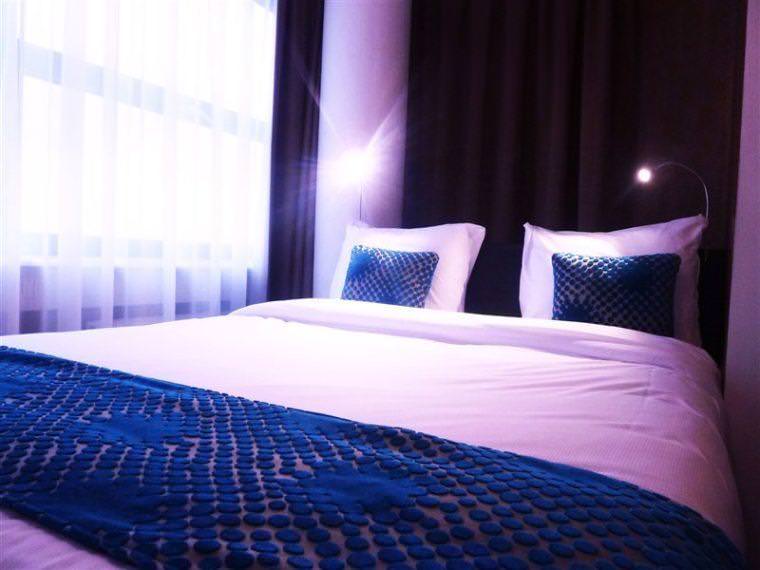 Occupying a huge bed, bathroom and toilet, television, unlimited wifi, complimentary drinks and a kitchenette, the Hague Teleport Hotel’s double studio room can be your best choice of room as well. And yes, you read it right, there’s a kitchen, where you can prepare some food of your choice. The kitchen is actually my favourite part of the room which I think most of the other hotel rooms don’t really provide. 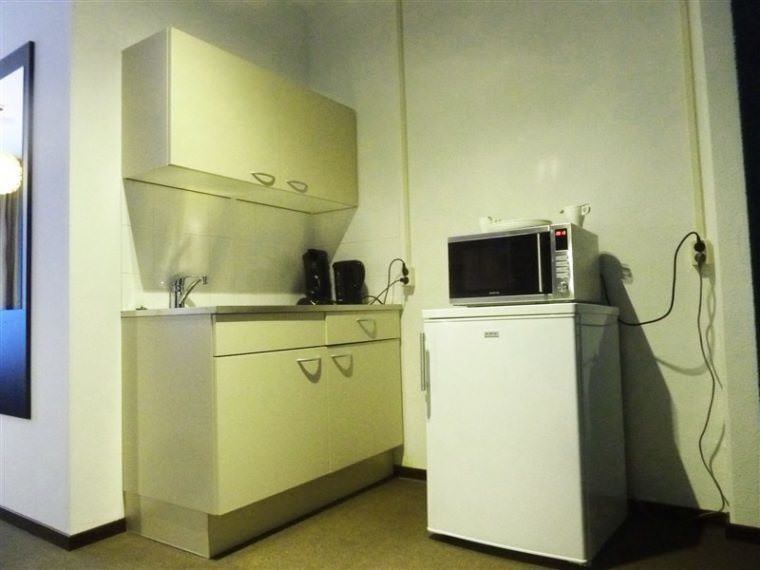 With 22 m² size, my room has view of the on-going constructions of buildings in the city and a glimpse of a river on the side – an interesting contrast though. 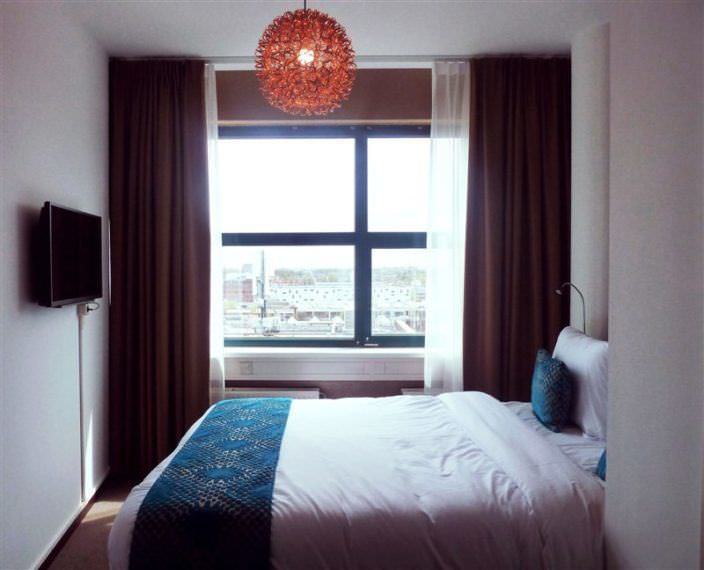 Since The Hague Teleport has been operating for only for a couple of months now, some are not fully functioning yet, such as the television. The installation of channels has been in delay by the provider but it’s great that the hotel has included Netflix on it. Well, it’s not that big thing for me as I enjoy watching movies non-stop and so the news that I need to catch up can be accessed in the internet anyway.

There’s an enough table for my working space. And if I say ‘enough’, it’s actually means ‘bigger’ than the usual as I just put my things everywhere in a table when I work. (I am a bit messy, you can say so)

I walked a lot in touring around The Hague and as soon as I see my room and let my body lies, the comfort of home was instantly felt.

Watch what kind of comfort that double studio room can bring.

Two fast elevators are working conveniently with a photo opportunity with the King and Queen of The Netherlands. 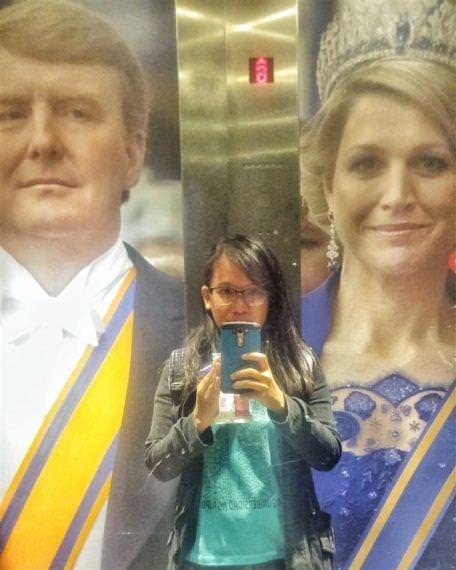 I found it interesting that most of the corners of The Hague Teleport are a representation of the Royal city and witty phrases. It makes the whole ambience vibrant and as your stay does. 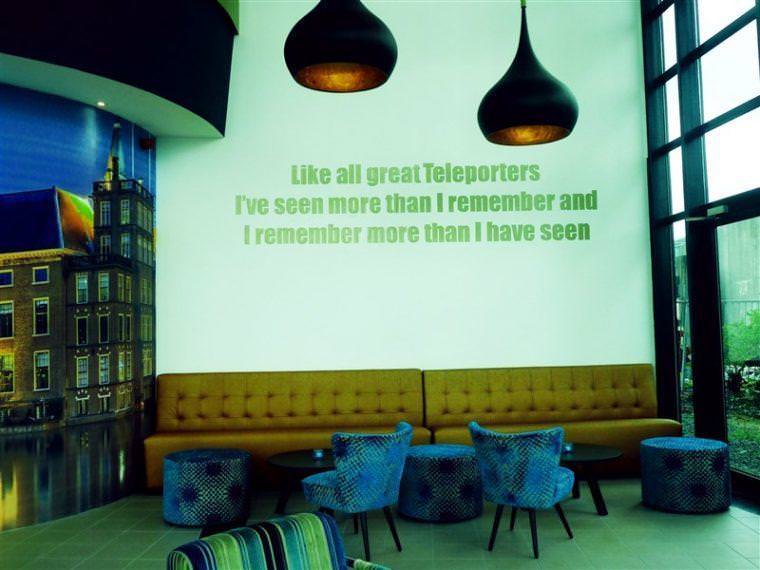 The Hague Teleport Hotel offers a free bike tour for all its guest who rent a bicycle from 11 in the morning until one in the afternoon. It was raining all the time so I opted not to take a bike but I am certain that this to tour is a perfect way to discover the city of The Hague.

Access to gym is also one of the guests’ privileges in staying at The Hague Teleport Hotel.  Located in the top floor of the hotel, stay fit as you explore The Hague.

The Hague Teleport Hotel will soon offer an Acroyoga workshop. Know how it works here:

My top factor in staying in a hotel is in fact the Food; the bed is just second. For four amazing mornings, my breakfast in The Hague had filled each of my day tastefully. 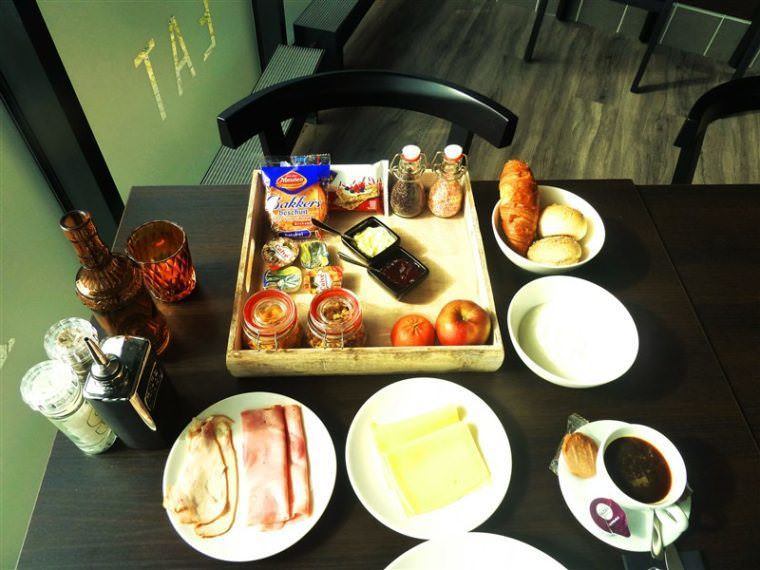 Though coming from Asia and rice is a must for breakfast, bread and cereals don’t make my meal incomplete. Would the complete set of bread, cheese, meat, cereals, fruits, biscuits, eggs, and drinks make me unsatisfied?  Totally not!

As I bite, I serenely enjoy the lively vibe of the restaurant, which I think is one of the best areas in the Hotel. 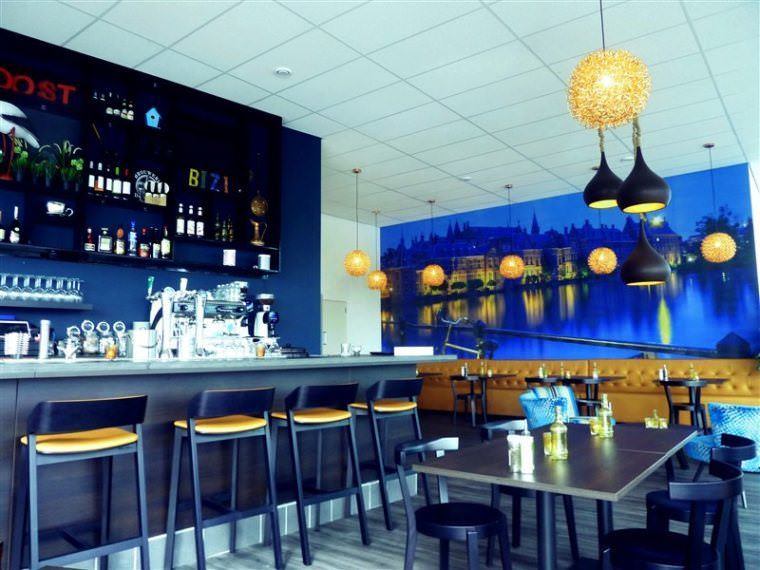 Arriving around eight in the evening (if I remember it right), the peppy Mr. Adrian at the reception greeted me. Offering a cup of coffee, I immediately felt the cosiness at The Hague Teleport Hotel while enjoying its interestingly-designed lobby. 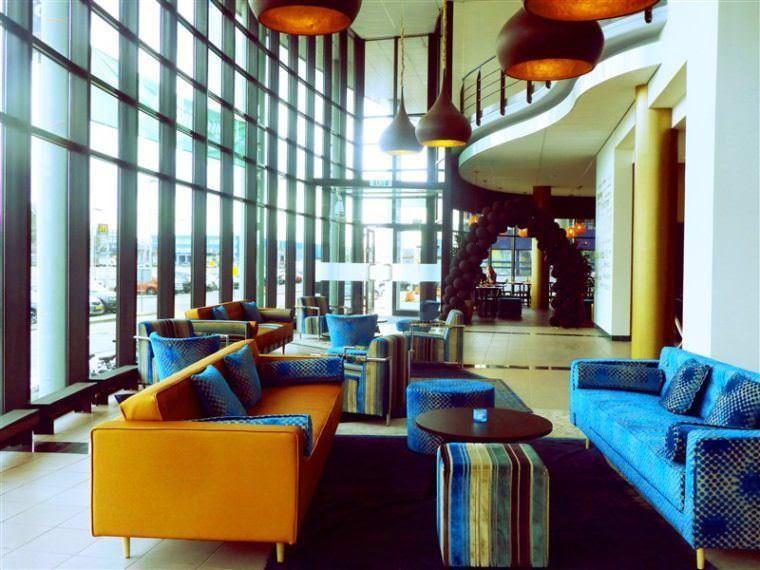 From the people at the reception until in the restaurant, The Hague Teleport Hotel never failed to make its guests as welcome as possible.

Directly in front of the Hotel is a bus station which can bring you around the city. If you prefer walking, in about half an hour, you can reach the city centre of The Hague where top attractions surround.

The HS station and The Hague main station are 15 and 20 minutes away respectively.

Last Words: To Evgenia Sakharova and Adrian, thank you for the warmest welcome! My amazing three nights of stay at The Hague Teleport Hotel were as sweet and valuable as your gifts! 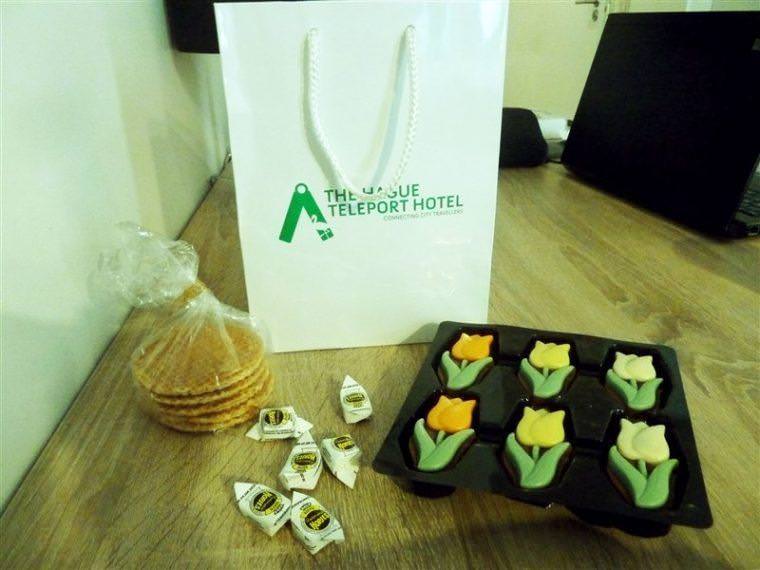 Note: The Hague Teleport Hotel offered complimentary stay for three nights but the views written on this article are my own. 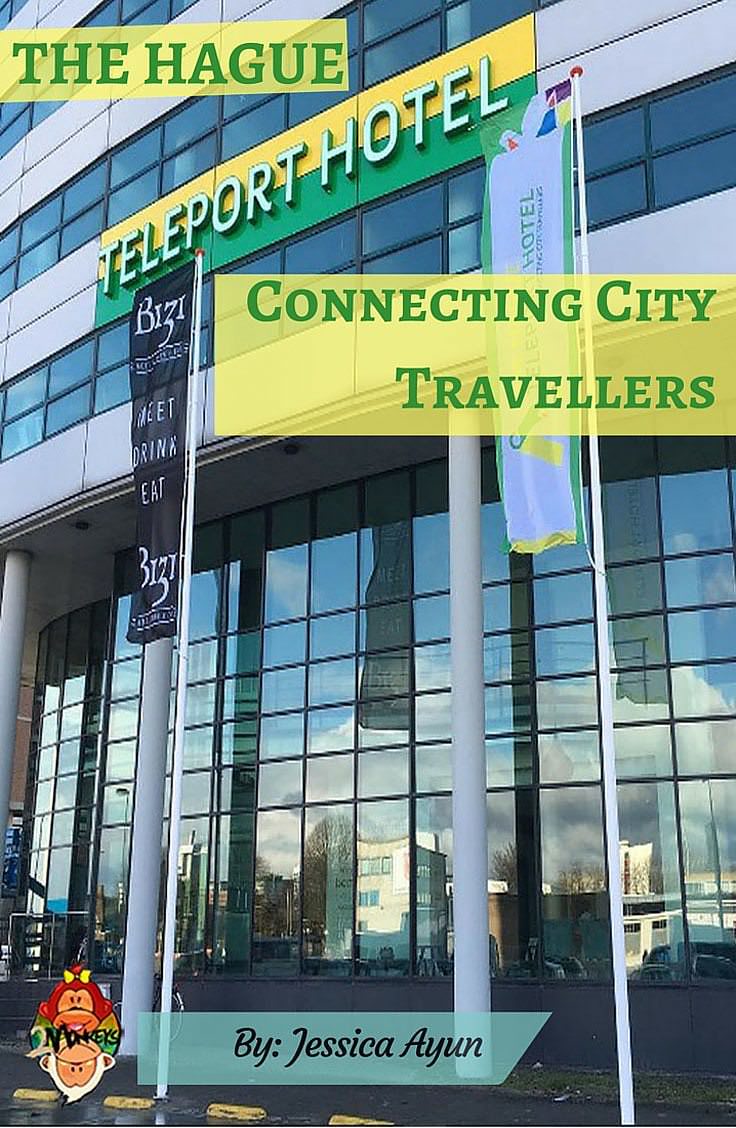 44 thoughts on “THE HAGUE TELEPORT HOTEL in the The Netherlands: Connecting City Travellers @TeleportHotels”