“The closer we get to our return date, the more I feel jittery. Travelling is truly bitter-sweet.”

I can’t believe that it’s been more than two months now since my brother and I started backpacking through South East Asia, and we’re not done yet! The closer we get to our return date, the more I feel jittery. Travelling is truly bitter-sweet.

We’ve met fellow backpackers and travelers on the road, some of whom we became close to because of the experiences and stories we’ve shared.

Being Filipino, now tanned and with uneven skin color, we almost always get mistaken as locals by locals and co-travellers. This is until they see us also carrying big backpacks, speaking in English and finally telling them we’re Filipinos. Once they know that we’re Filipinos, they always bring up how great Manny Pacquiao is which is something we are very proud of. He has become a status symbol of the Philippines. Imelda’s shoe collection is also famous to the older travelers – truly Imeldific!

Finally, we get the compliment of how well we communicate in English compared to the rest of our Asian neighbors. And we always say, well, we are born with it. Kidding!

Here are the usual questions and observations they ask and tell us – mainly about language – when we introduce ourselves as Filipinos:

1. Your English is very good, how come?

Yes, that’s true because we have two main languages – Filipino and English. English is also the language used in school in the majority of subjects.

When visiting the Philippines, it is easy to ask around for directions. Even the jeepney driver or street vendor can very much help you.

The first question has to do with the American occupation and imposing English as the official language before. Overtime, we adapted it in our system until it got recognized as one of our official languages. We can look at the second question on two sides. It is more of an advantage; we are more globally competitive given our ability to express ourselves in English. We understand and interact better locally and internationally.

We are multi-lingual with the diverse local tongues we have in the Philippines besides Tagalog (or Filipino).

One disadvantage of using English as a medium of teaching is that some students can’t relate to or understand words and sentences. Much as they try, no matter how alien the words or sentences feel, they don’t stick in our mind because it is not our mother tongue.

English, as the official teaching language, is a lengthy conversation that even Filipino language experts and educators are debating on. Another disadvantage is seen more at present, using English to raise kids.

What happens to a percentage of Filipino parents now is they use English even at home. The kids grow up knowing only English as their language, when in fact, we have Filipino and the parents’ dialects that kids should also learn to better appreciate their roots.

We met Germans, French, Italians, Thais, Vietnamese, Japanese, etc. who revere their language more than English. The mode of teaching in their countries is their official languages. English is just a selective subject they offer in school. They can opt not to take it if they don’t want to. But they can also speak good English because they learned through conversation and took it up as a course.

3. Spain conquered the Philippines for more than 300 years. The Americans only for a short time. How did English stay and not Spanish?

This is a good observation by Cho, a South Korean guy who is currently based in Ho Chi Minh. But even Europeans also have the impression that we should be able to speak Spanish other than English. They sometimes greet us in Spanish. It’s mainly in the southern Philippines like Zamboanga where Spanish is still spoken. After the Spanish occupation, the language slowly disappeared.

But if we look at it closely, Filipino has lots of Spanish words or derivations like the days of the week, even saying “kumusta?” from the Spanish word “como estas?”. We just consider all words as Filipino but check it out, and you’ll surely see a lot of Spanish words! Related Article: 9 Spanish Sentences for Asking Directions

The two Spaniards, Jose, and Aitor, who were part of our circle conversation in the Ho Chi Minh dorm, agree.

I would have loved if I can. I want to learn Spanish with its romantic charm, maybe on my South America adventure soon or when I go back home.

UPDATE: According to one of our readers, Tim Della,  during the Spanish colonial era, Spanish was not taught to the population. Those who can pay for tutors or those who are Ilustrados(social class) are lucky. There was no public school system until the Americans brought the Thomasites in the early 1900s. Unlike in the Latin America where they were big waves of immigration from the old world, that did not happen in the Philippines because it was too far. That’s why there only a handful of immigrants that came here and most of them returned to Europe after WWII.

4. What is the main religion in your country?

Christianity comprises 90% of the population with around 80% Roman Catholics and about 9-10% from the other Christian religions. Islam makes the other 10%.

5. Is it expensive to travel in the Philippines?

This has become a concern especially by Europeans that’s why they usually don’t include it in their itinerary. But they hear the best experiences from friends and family who visited our country and they also want to go but it’s almost always “maybe next time.” It depends where you go and what you do just like in all other South East Asian countries.

To be honest, based on comparisons with our current backpacker budget, the Philippines is one of the cheapest in SEA! The only difference with the rest of SEA is you need to fly in and out of the country unless you want to do the slow ship ride in the Pacific.

And Filipino hospitality is the best!

6. Where are the best places to go in your country?

We have more than 7,000 islands. You can’t visit all of them but you can choose from a wide array of beautiful places to visit in the Philippines. You also need more time to visit the country; few weeks is not enough.

Trekking and mountains? Head north to the highlands of CAR and the Mountain Provinces. Beach, diving and water sports? Go to the middle towards the south. Most popular are Boracay, Palawan, Agusan, and Batangas. You can also do a combination of mountains and waters.

If you want a peaceful escape with the Pacific in

Boracay is a small island in the Philippines located approximately 315 km (196 mi) south of Manila and 2 km off the northwest tip of Panay Island in the Western Visayas region of the Philippines. Boracay Island and its beaches have received awards from numerous travel publications and agencies. The island is administered by the Philippine Tourism Authority and the provincial government of Aklan. Apart from its white sand beaches, Boracay is also famous for being one of the world’s top destinations for relaxation. It is also emerging among the top destinations for tranquility and nightlife.
White Beach, the main tourism beach, is about four kilometres long and is lined with resorts, hotels, lodging houses, restaurants, and other tourism-related businesses. In the central portion, for about two kilometres, there is a footpath known as the Beachfront Path separating the beach itself from the establishments located along it. North and south of the Beachfront Path, beachfront establishments do literally front along the beach itself.
In 2012, Boracay was awarded as the best island in the world from the international travel magazine Travel + Leisure.
https://en.wikipedia.org/wiki/Boracayront of you and dream-like scenery, you can head to Batanes, the northernmost island in the Philippines.

7. Is it dangerous to visit the Philippines?

As with other countries, there are safe and unsafe places for travelers and even locals. It’s not because parts of Mindanao have conflicts that the Philippines is already entirely an unsafe country to visit. It is always prudent to read the news and current events about a place you want to visit before going there for your safety.

As what Chiquei Quiatchon, one of our readers said, “The Philippines is a big country. A lot of places to see and to travel. Plus I know for a fact that Filipinos are very hospitable and kind. That’s why I usually recommend the great provinces and places we can offer to boost our tourism. I believe there is something scary in a place we don’t know yet.”

So the next time you travel, greet someone hello and strike a conversation. Don’t be limited to your group. Who knows, you might find a new connection in that person? After all, traveling is not just about the places you’ve been to but also the people you meet along the way.

Being Filipino, what other questions have you been asked while traveling? 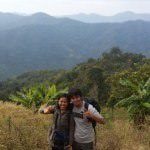 About the Author: Angel Pakinkin was working for a Finance Industry for six years when she finally decided to quit her job to pursue her personal projects including traveling and writing finally. She started backpacking in SEA last Dec 1, 2014, and it will end on Mar 25, 2015. She’s going back to the PH since there are some activities and projects that she has to finish.

11 thoughts on “Most Common Questions Asked to a Filipino Backpacker”