Home » Destination » Three Days in Beijing Itinerary- The Best Things to do in Beijing, China

Although we have been traveling for almost 7 years now and even lived in nearby Hanoi, Vietnam, we had never experienced any of the things to do in China. This year we finally decided to make it happen, with a trip to Beijing, China and Pyongyang, North Korea! 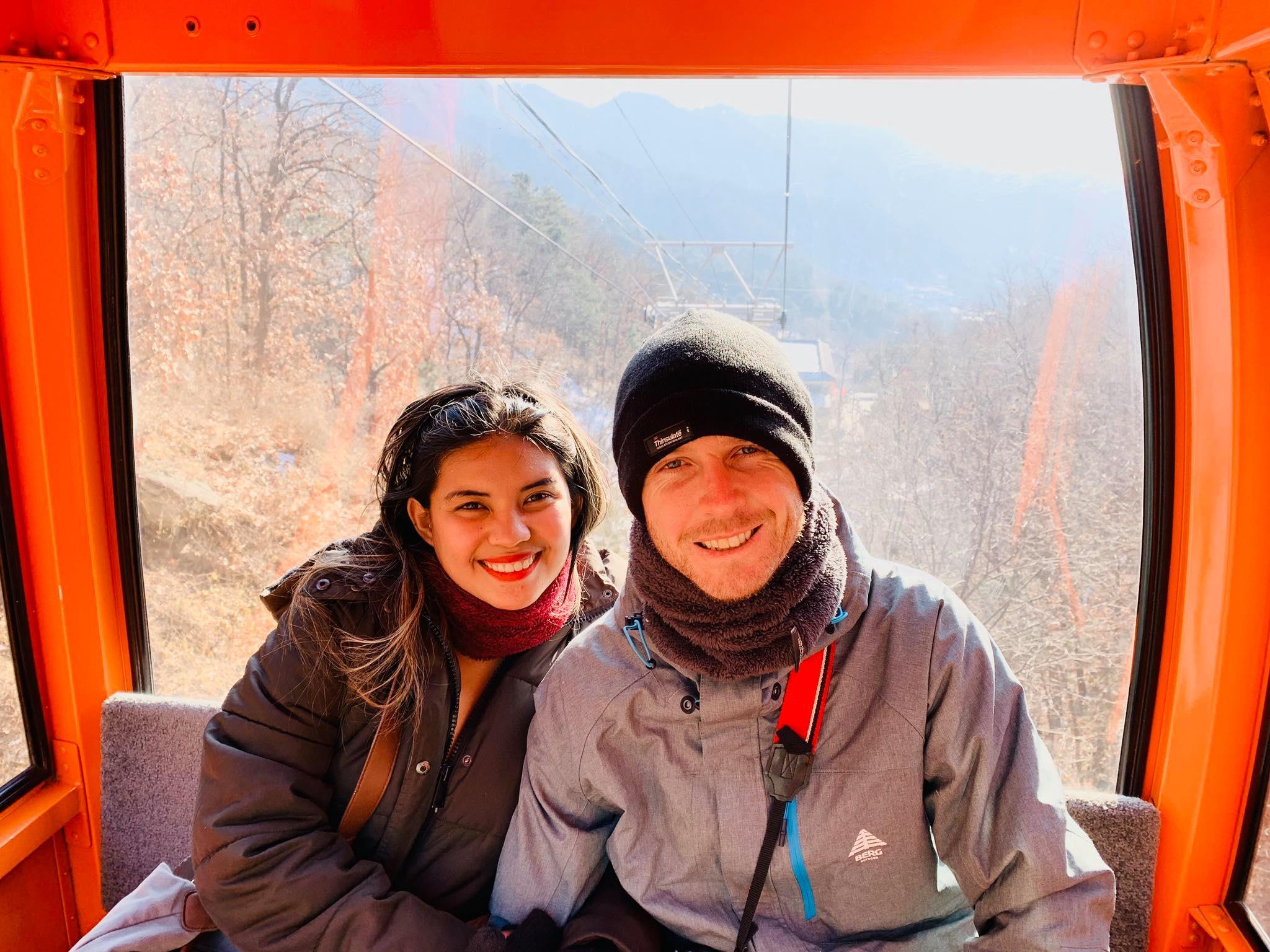 It would be a long travel time to get there, starting with a 3-hour flight from Montenegro to Moscow, a 4-hour layover and then a long flight from Moscow to Beijing.

Day 1 – Our arrival in Beijing, China

By the time we arrived we were exhausted, but so excited to get out and explore that we just dumped our bags in our corner suite of the Sofitel Beijing Central and went hunting for real Chinese hotpot! 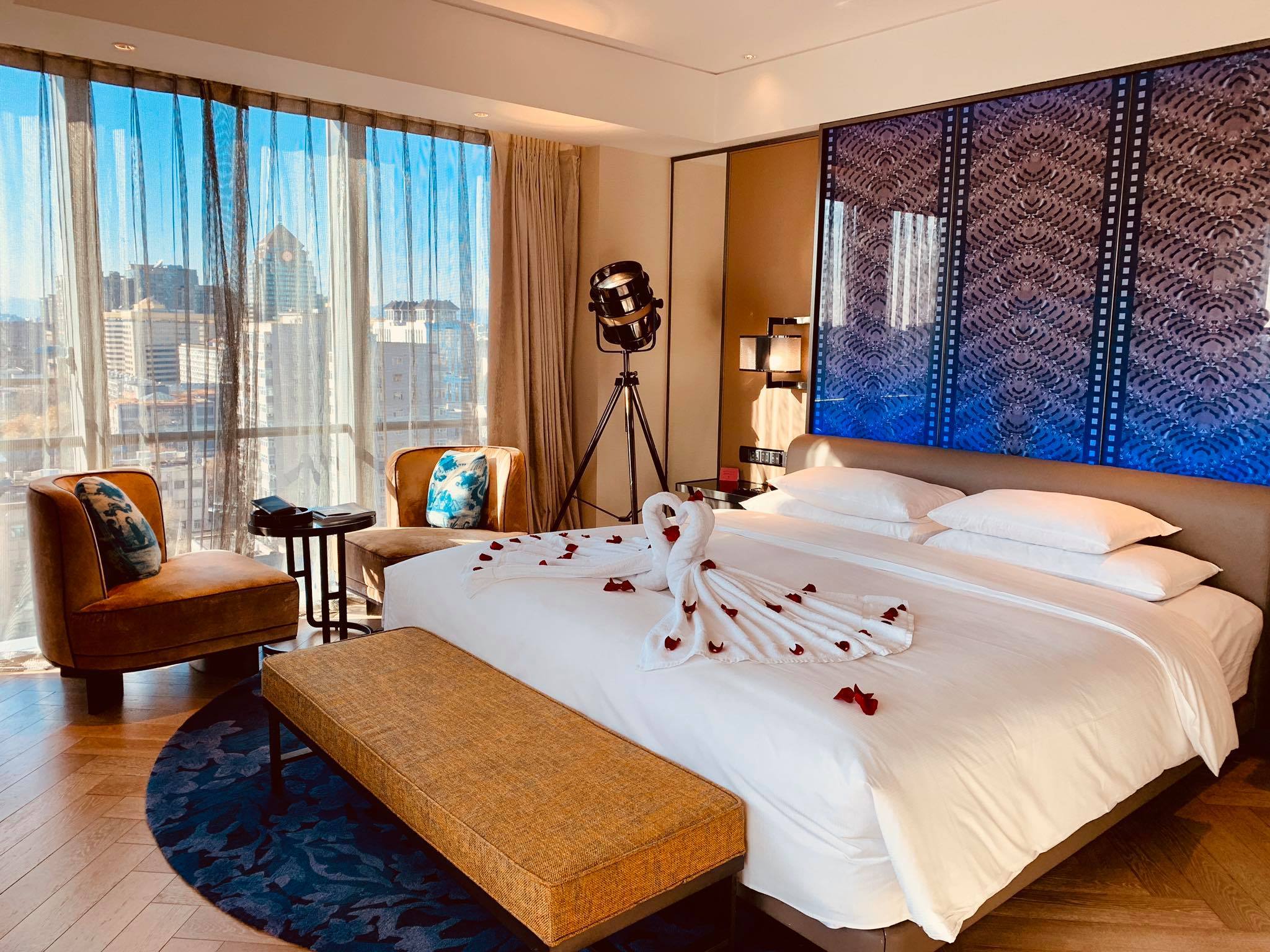 It was the middle of winter so the change in temperature was a bit of a shock for us. All the more reason to spend a couple of hours eating an amazing hotpot lunch filled with mushrooms, vegetables, and tofu!

In the evening we decided to enjoy the hotel and relax so we were prepared for our full-day tour of Beijing the next day. Luckily for us, we arrived on the same day as the Christmas tree lighting party, so we were invited to join in for cocktails and Christmas bites!

There are so many things to do in Beijing, but at the top of the list for us were “the big 3” – Tiananmen Square, the Forbidden City and Great Wall of China!

We arranged our full-day VIP Beijing Tour with Tinggly Experiences so that we could make the most out of our short time in the city.

First, we visited Tiananmen Square, which for a long time was the biggest public square in the whole of China, until the title was taken over by Xinghai Square in the city of Dalian, China. This is one of the most breathtaking things to see in Beijing and it is clear to see why. At almost half a million square meters it incorporates the Monument to the People’s Heroes, the Great Hall of the People, the National Museum of China, and the Mausoleum of Mao Zedong.

The “Tiananmen” itself – the Heavenly Gate of Peace – forms an impressive backdrop and is all that separates the square from the illusive Forbidden City. 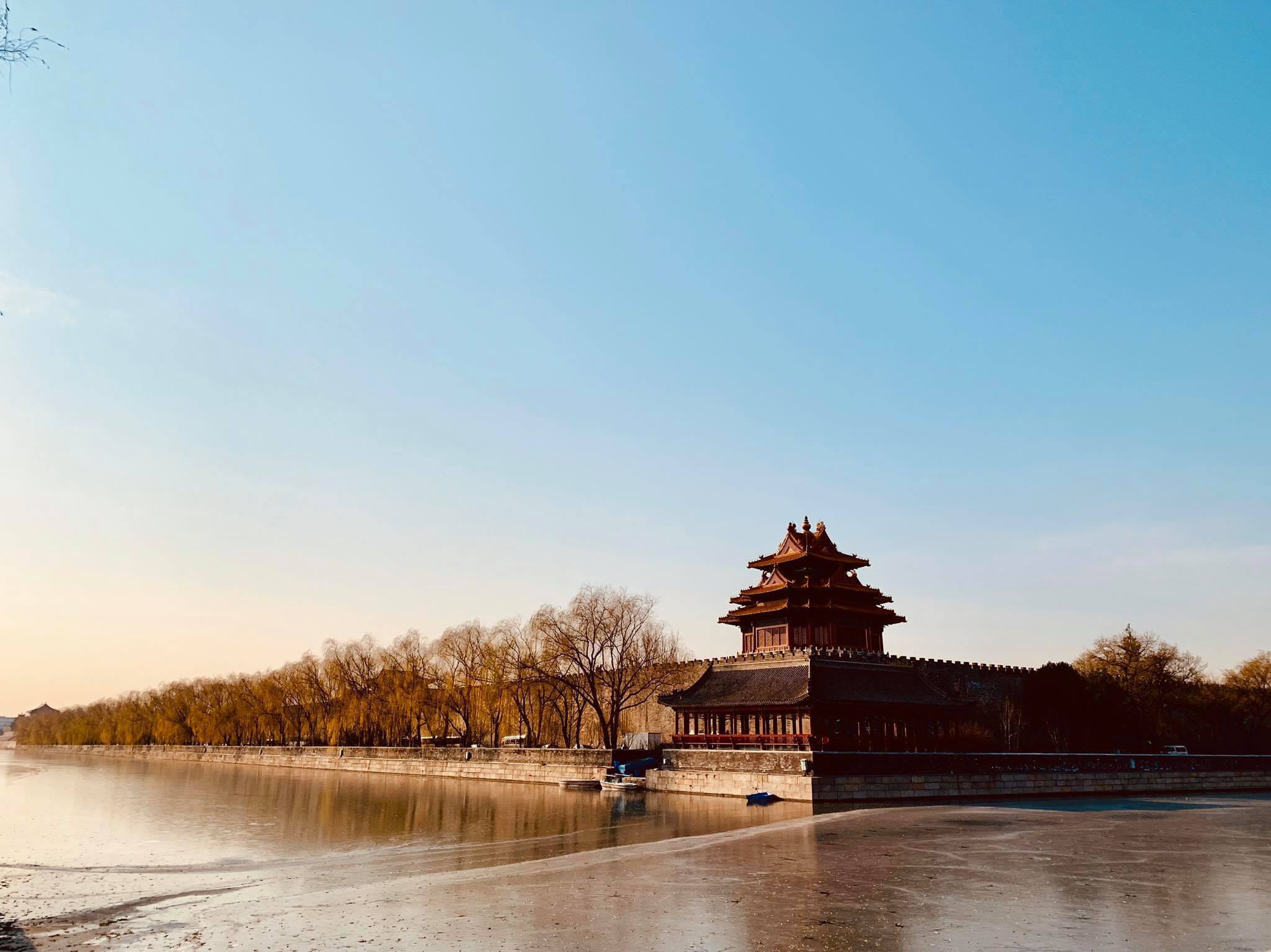 From Tiananmen Square, we passed through the Heavenly Gate of Peace and into the grounds of the Forbidden City on the other side of the walls. With the number of visitors being much lower in the winter, it was much easier to appreciate the sheer scale of the complex. Each sprawling courtyard leads onto another in a seemingly endless chain of grandeur. That said, the Forbidden City is noticeably understated in its materials, with painted wood and simple stone the most prominent features and no shiny marble or gold insight.

Near the exit of the forbidden city was the clock museum, filled with timepieces which were gifted to the Chinese Emperor by various countries over the years.

From the Forbidden City we all jumped back into the van for the 1 hour or so drive to the Great Wall of China! About halfway there we stopped a local roadside restaurant for lunch, where we filled the table with dishes to share between the group. 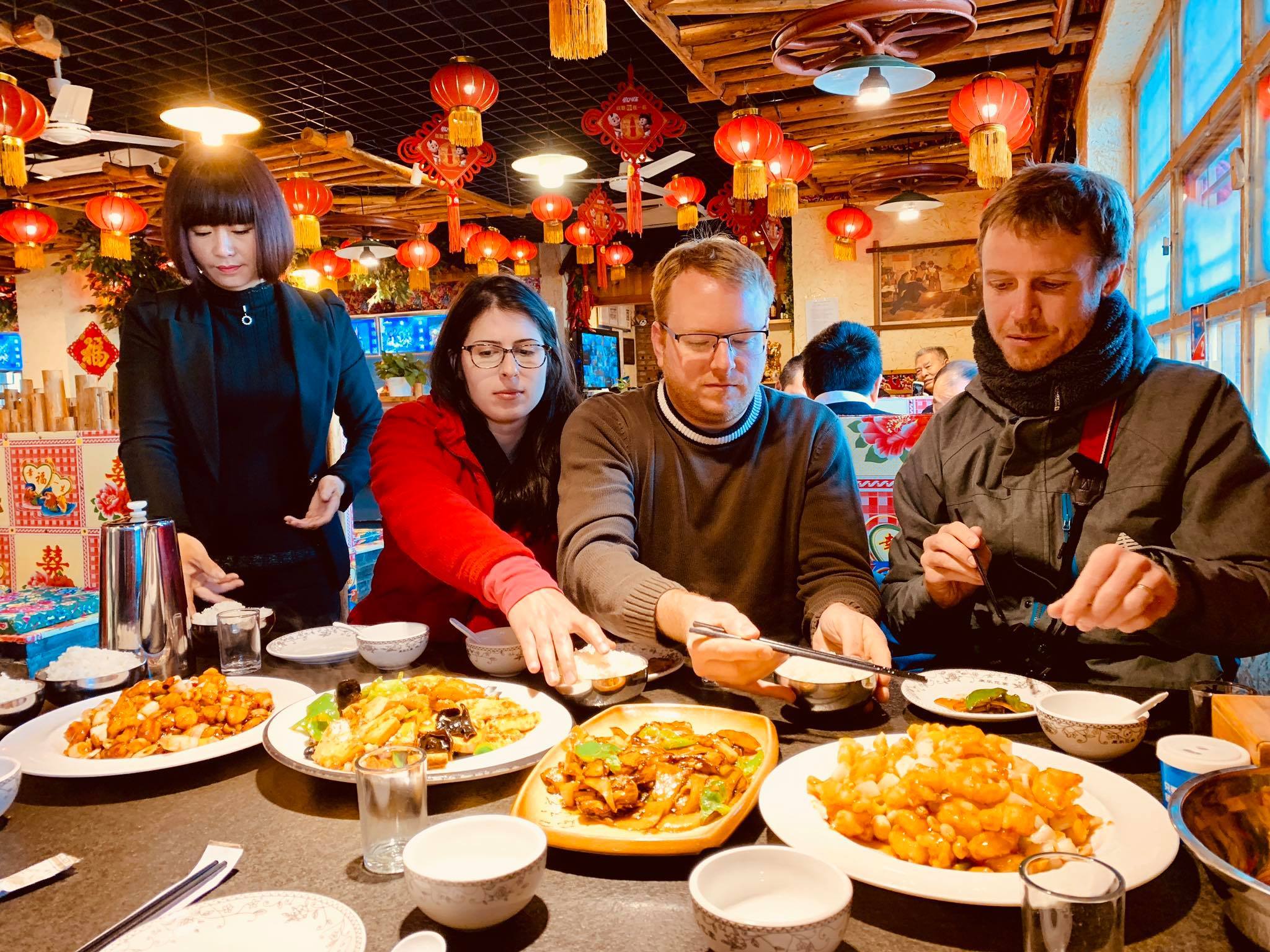 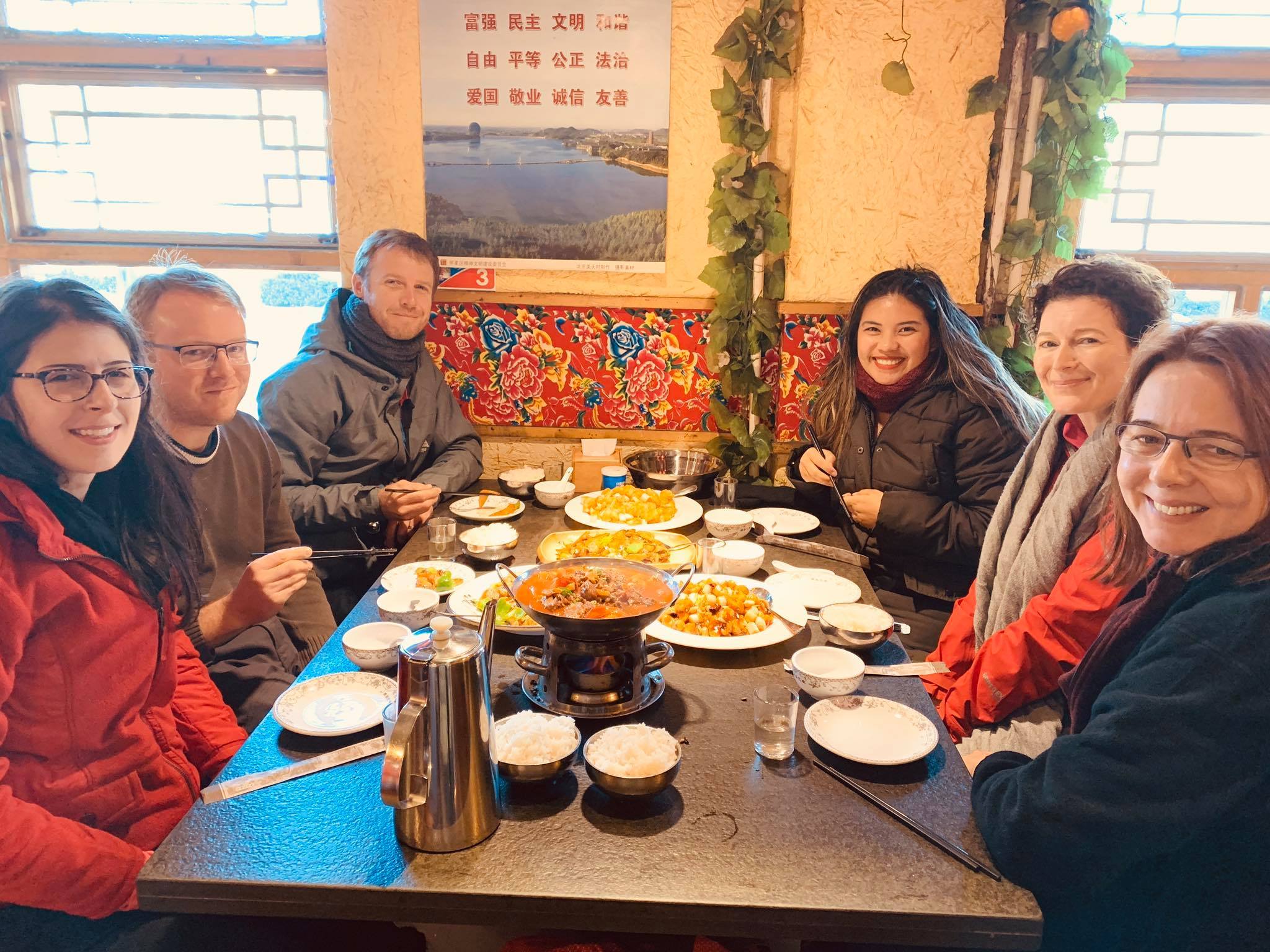 Only about 20 minutes from the restaurant was our entry point to the Great Wall of China, Mutianyu, which is known as one of the best locations to visit the Great Wall. Even from the road, we could see the wall snaking its way along the mountain ridge in the distance. This is hardly surprising given that it can be seen from space! 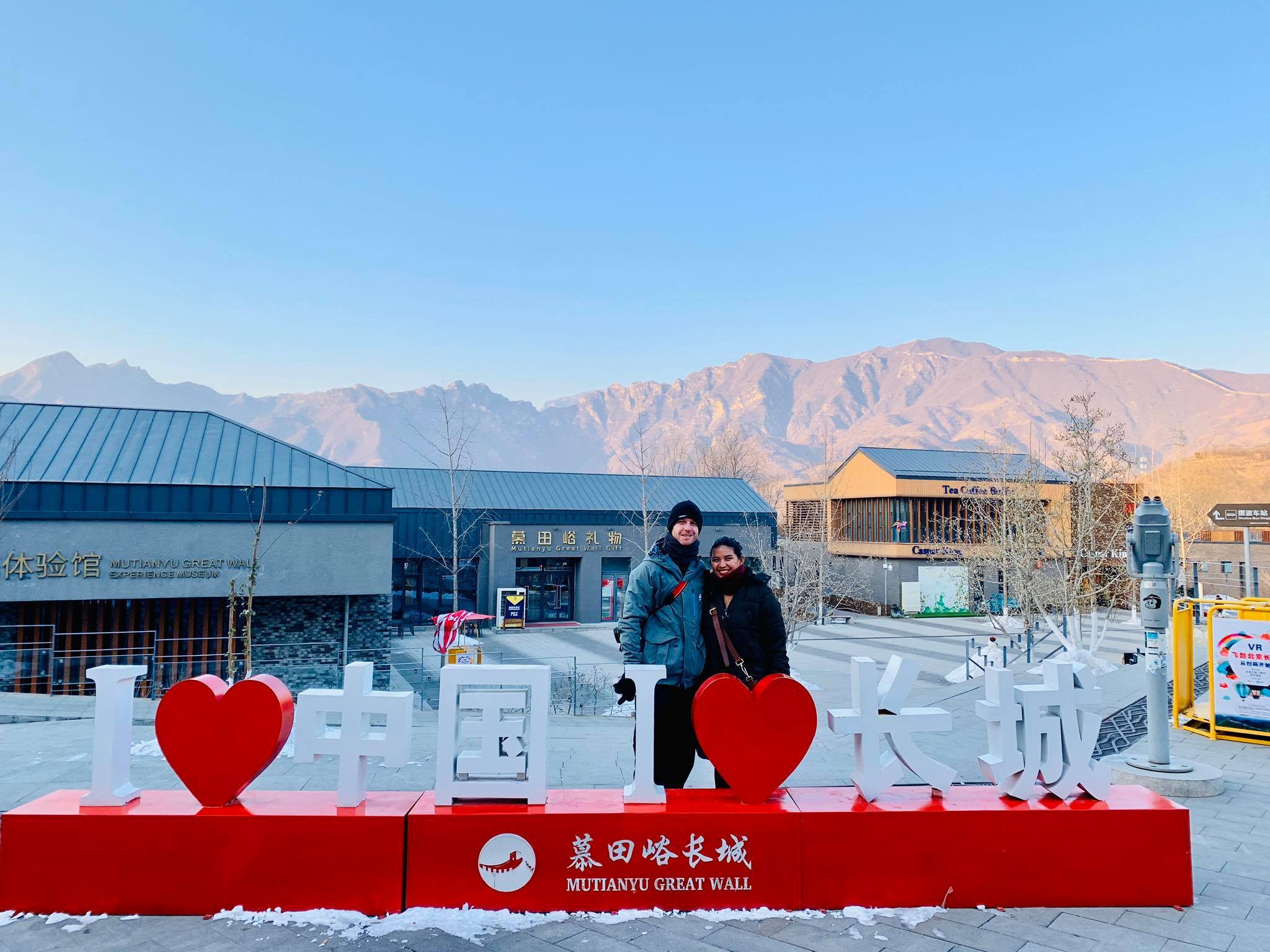 It is far less busy here than in other places, but even so in high season you’ll find yourself queuing with hundreds of others to get up there.

The winter is much quieter, however, so we were able to jump straight onto the shuttle bus and then walk onto the cable car which took us up to the wall.

This area of the wall is fully restored and it was possible to walk from the cable car at station 14 all the way up to station 21 for the best view of the wall disappearing into the distance.

We were given the option of taking the cable car down or riding a sled back down the mountain to the bottom. Given how cold everybody was, we all decided to stick with the cable car rather than add wind chill to the equation!

When we arrived back in Beijing city we jumped out of the car in the old city and had a half-hour foot massage while we waited for our food tour to begin. It was a really fun way to relax and warm up our cold toes after spending all day exploring in the freezing cold!

We spent most of the next morning taking it slow and enjoying the luxury facilities of Sofitel Beijing Central, like the heated indoor swimming pool, hot jacuzzi, and sauna!

From there went out shopping for all of the Chinese food supplies that we wanted to take back to Montenegro with us. We managed to fill three suitcases with noodles, sauces, electric hotpot and anything else we could legally carry!

We saved our final evening in Beijing before we traveled to North Korea for our favourite thing to do in any new city – eating! 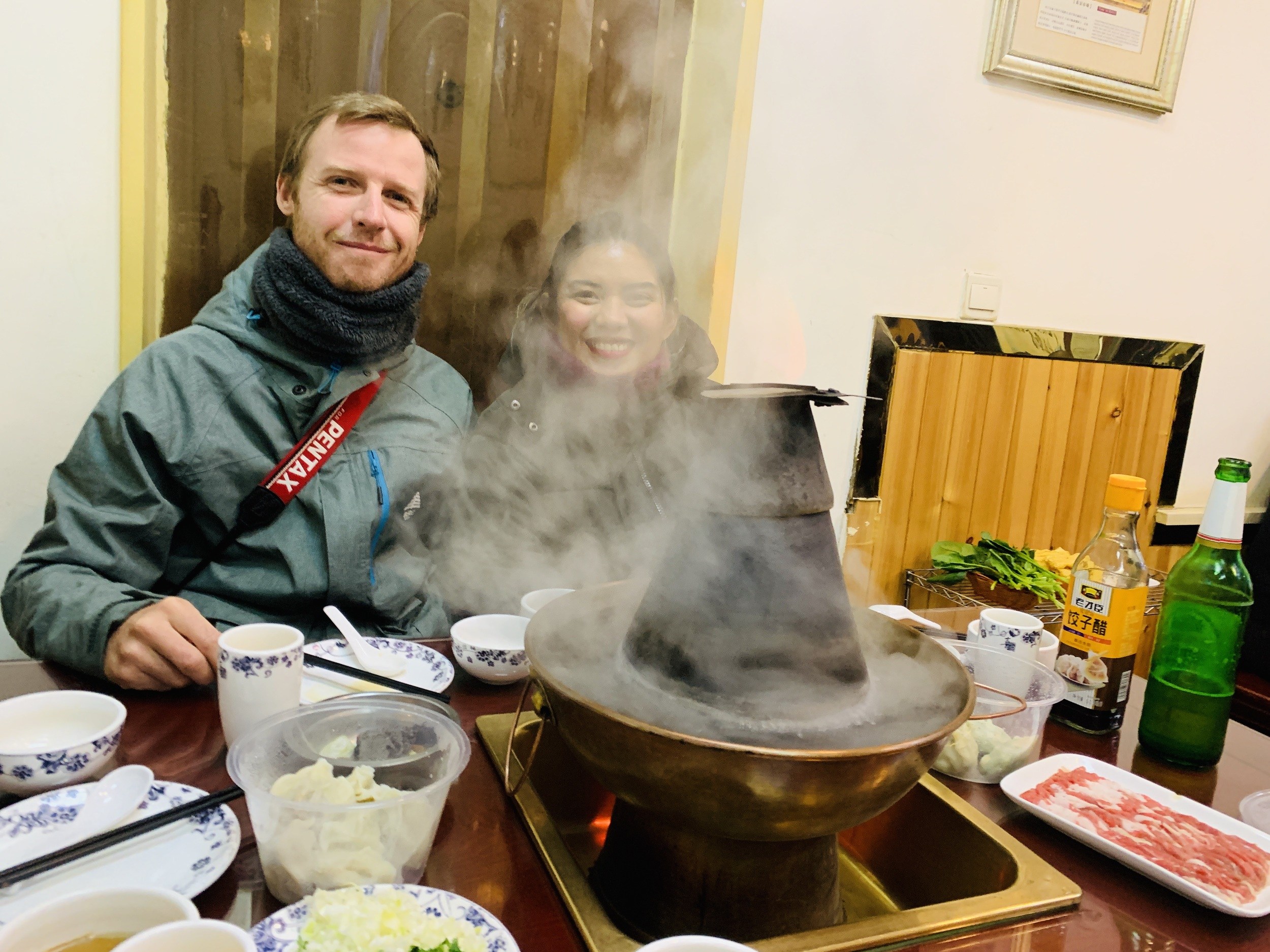 We met our Beijing food tour guide and our “fellow eaters” outside one of the metro stations and started from there. The first warning we received was that this food tour would be a marathon, not a sprint! With 7 different meals to try, we understood why! 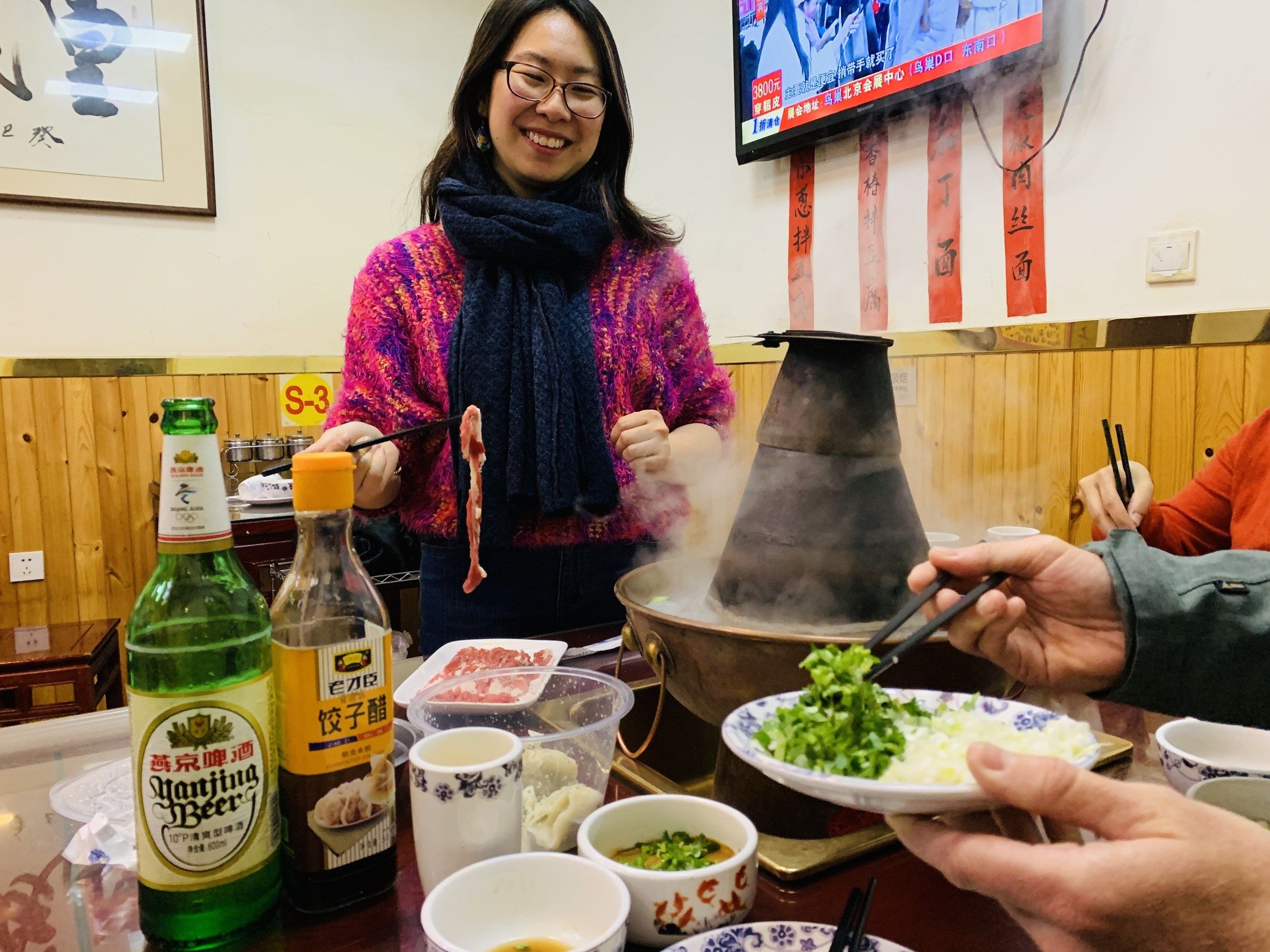 Our first stop was just meters away, with beef and red bean flatbread from a street food stall. From there we moved into the warmth of Old Liu’s Mongolian Hotpot, where we learned how to make a true Mongolian hotpot and the history behind it. With it, we also had some cabbage and pork dumplings! 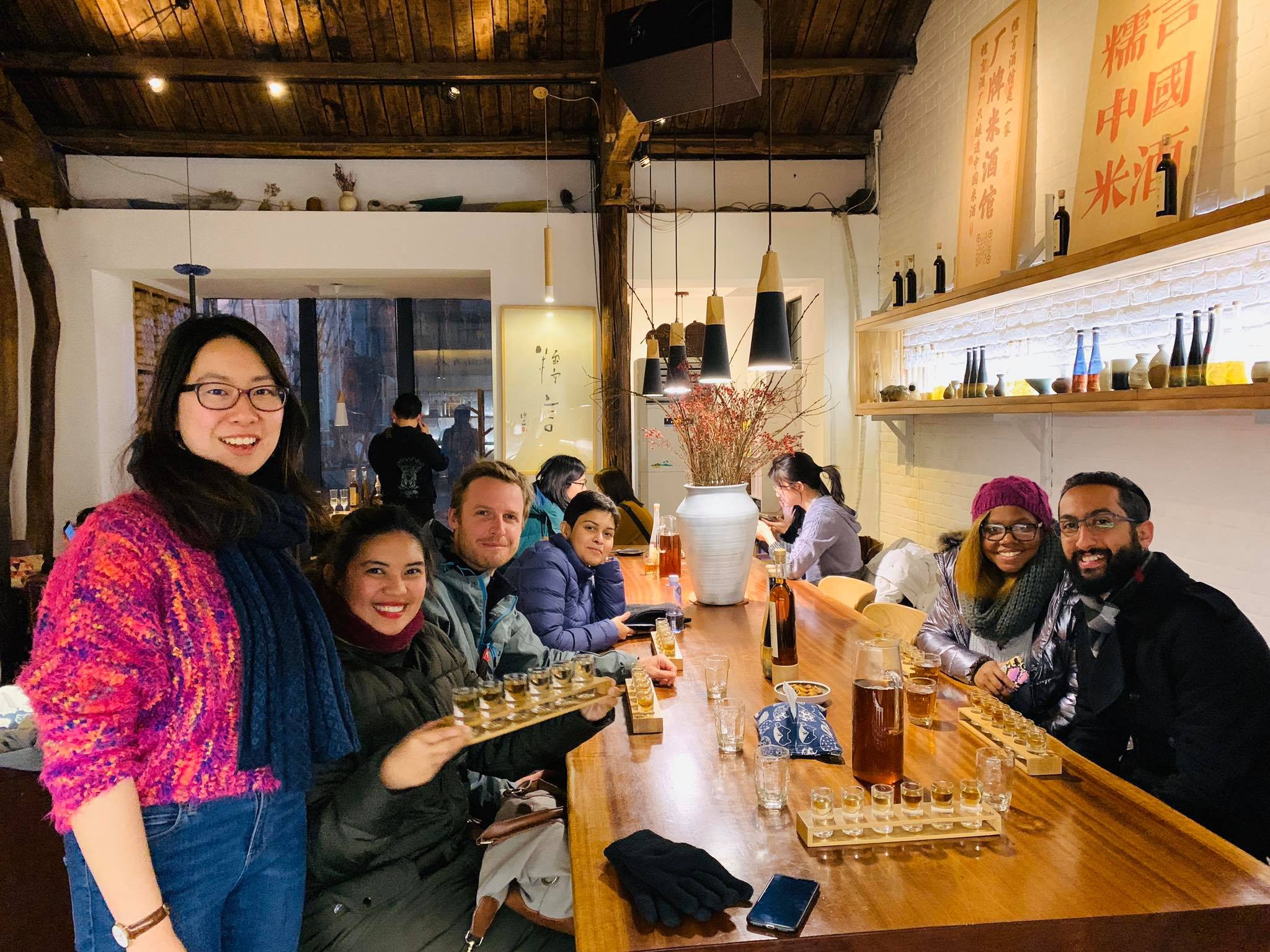 The next stop was a purely alcoholic one, in a trendy rice wine bar where we had a sample flight of 6 rice wines, all with distinctly different flavors and strengths.

Up next was something we had never considered eating before; donkey burgers! The meat was surprisingly tasty and tender, similar to horse meat which we tried once in Vietnam. 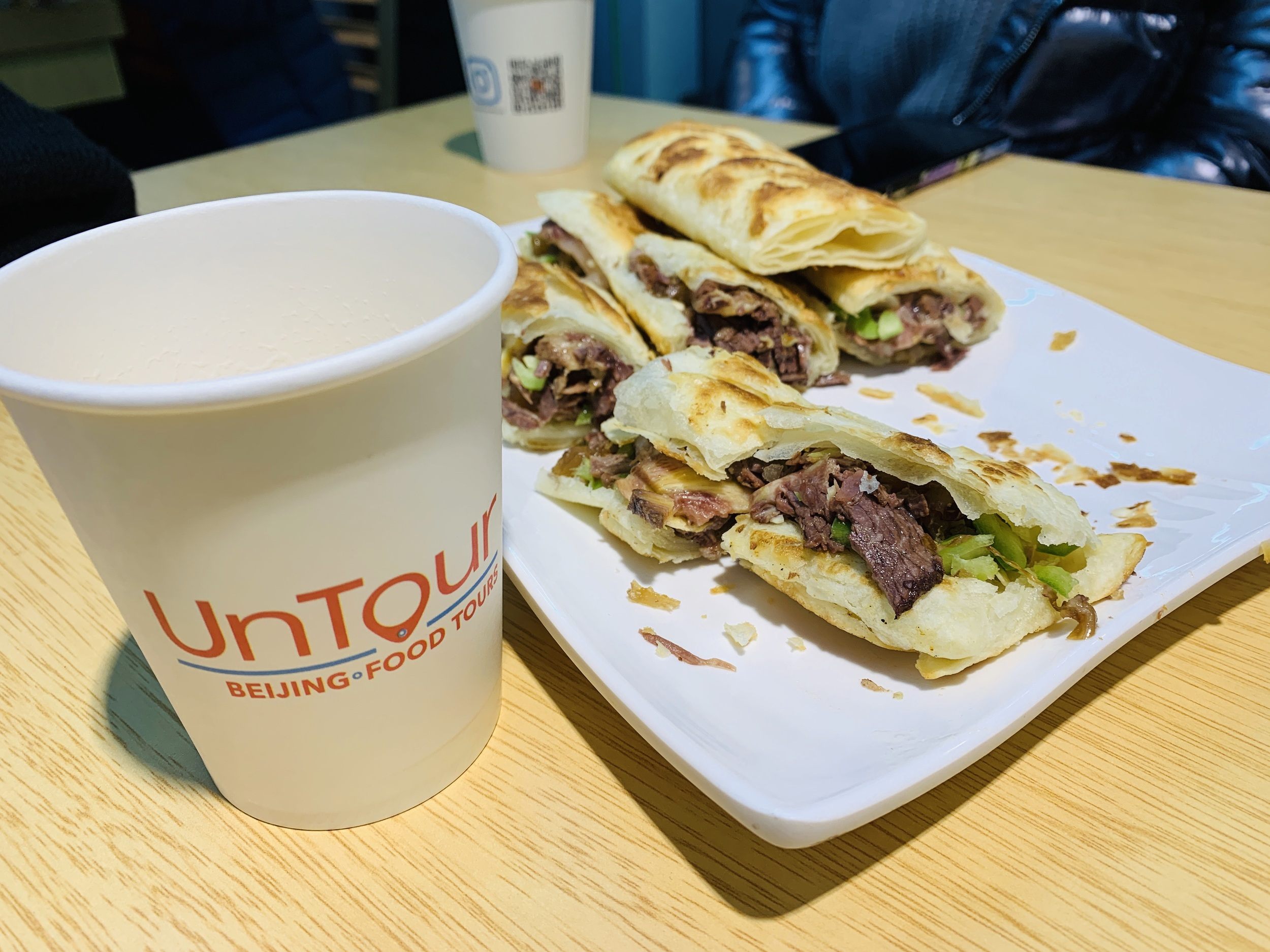 After the donkey, we were treated to some Biang Biang noodles which we could watch being had made in front of us. These are the biggest noodles we have ever seen and were much more similar to pasta.

Our final stop was Beijing’s most famous chicken wing joint – Fifth Brother’s Chicken Wings! We were told an amazing story about this place before we arrived, which is that it originated as an illegal gambling den. The owner made chicken wings to sell to the players, but they became so popular that they took over the whole business! You can only eat by reservation and you can only get one if you’re invited by someone who already eats there. It has its own special kind of exclusivity and a whole list of rules that make it a very interesting visit!

By the end of this tour, we didn’t even realize that several hours had flown by and we were stuffed full of food. There was nothing left to do except head back to the hotel and crash out in a food and rice wine-induced coma!

We had an amazing three days in Beijing and we are so happy that we were able to see and experience so much in such a short space of time. If Beijing was not already on your bucket list then it should be now!

One thought on “Three Days in Beijing Itinerary- The Best Things to do in Beijing, China”

Central Asia Travel Guide – 11 Things To Do In Uzbekistan