There are so many amazing places to visit in Costa Rica that it can be hard to know which to choose when you have limited time.

Nestled between low-lying farmland, dominated by banana plantations, and the rich, warm waters of the Caribbean, Tortuguero National Park, Costa Rica, is 77k acres of dense tropical rainforest, mangrove forests, swamps, beaches and lagoons, all of which are home to some of the most highly endangered and most poached species of wildlife on the planet. The best known of these species gives the park its name, returning to the same beaches each year to build their nests and lay their eggs safe from various predators, including raccoons, weasels, wild dogs, birds and of course, humans. The third-most visited national park in Costa Rica, reached only by airplane or boat, attracts around 50,000 visitors a year, both in and out of the turtle nesting season.

Much like another of Costa Rica’s most immersive natural environments, the Osa Peninsula, there are only two ways to enter Tortuguero National Park, Costa Rica; by riverboat through the jungle habitat of howling monkeys, caimans, lizards and river turtles; or by private chartered plane from San Jose, which only takes half an hour and gives amazing views of the country’s diverse landscapes from the cooler, mountainous central valley, down to the tropical lowlands of the Caribbean slope. The private flight is obviously by far the most luxurious, comfortable and least time consuming way to travel, with spectacular aerial views, but the hour and a half rainforest boat ride is a far more enchanting and inspiring entrance to this spectacular natural paradise.

We arranged to stay in one of the lodges in Tortuguero, who picked us up from our hotel in San Jose and arranged everything stage of the journey!

I traveled by humble riverboat!

If you’ve already spent some time on the Pacific coast and thought it couldn’t possible get any more relaxing, then the country’s opposite coast will give you a whole new perspective on the meaning of Pura Vida. One of the best places to visit in Costa Rica, the unique fusion of laid-back Latin love and cool Caribbean charisma creates an atmosphere unlike any other, the perfect blend of two of the world’s coolest cultures meet in an amalgamation of food, music, dance and an all-embracing passion for the good life. If you can’t be happy here, then you probably don’t want to be!

Rivers are at the heart of Toruguero National Park, they are the lifeblood of the modest communities living here and home to innumerable species of wildlife which draw visitors from around the world year round. Wildlife spotting is one of the most popular and exciting things to do in Costa Rica. On the short journey by boat from La Pavona to the village of Tortuguero, you can see freshwater turtles, caimans, green macaws, giant iguanas and three species of monkey; howlers, capuchins and the acrobatic spider monkeys.

Wild cayman on the riverbank

There is loads to do in Tortuguero National Park and Tortuguero Lodge were able to organise all kinds of trips for us.

Kayaking and boat trips along the rivers and jungle canals are the best way to see the wildlife in the park and to get a true feel for the environment. This is a habitat and a community designed with water at its core, so trying to avoid it would be missing out on the soul of Tortuguero National Park.

Jungle treks are possible too, but again, this is a water-world, so you’ll be a little more limited on foot than in a boat.

Simpler pleasures like chilling out to the sounds of jungle life, or diving into the sea to soak up some Caribbean Pura Vida, are some of the most relaxing things to do in Costa Rica!

If you feel like something a little more energetic, then try climbing up to the top of Tortugero Hill, which takes around 2 hours to reach, but you’re rewarded with amazing views of the whole area.

With over 320 known species of birds which call it their home, Tortuguero National Park is one of the best places to visit in Costa Rica for birdwatchers and ornithologists. There are flocks of green macaws, six species of Kingfisher and the slaty-tailed Trogon to name only a few. Your zoom lens and notebook will be kept very busy!

One of many birds drying its wings

The beaches of Tortuguero National Park are the best place to see turtle nesting in Costa Rica. During turtle nesting season the park becomes flooded with tourists trying to witness any of the three types of sea turtle nesting, laying their eggs and the baby hatchlings digging out of the nest to make their way to the sea. Turtle tours are only available at night, between 8pm and midnight and cost around $20 USD. Don’t forget to visit the Sea Turtle Conservancy in Tortuguero village to learn more about the turtles themselves and the measures being taken to protect them. This is undoubtedly one of the best places to visit in Costa Rica if you want to witness real, sustainable nature conservation in action.

Set alongside the river and just outside the 51,000 acre Tortuguero National Park, Tortuga Lodge and Gardens is a sustainable eco lodge in the heart of the jungle. There are 27 rooms all of which have views over the river, including 2 luxury suites and a penthouse.

Chilling out in front of the downstairs suite

There is no air conditioning, TV or background music anywhere in the lodge to give you a totally immersive experience of the sounds and feelings of the jungle. There are several private nature trails which you can explore on your own or with a guide in the morning or the afternoon and you might even share the natural, chlorine-free pool with a giant green iguana!

Warm welcome and cold drinks after a riverboat tour

There is a perfect level of luxury and service here, which provides comfort and relaxation, without ever crossing the line into extravagance and self-gratification. All of the staff are warm and friendly, whilst allowing you to have your own time and space to enjoy yourself. You really feel that you are here for the environment, not the other way around.

You’ll never be short of food here and the quality of the meals is incredible. All of the dishes are based around traditional Costa Rican ingredients and then given an added flare of contemporary culinary design.

It really is the little touches here that make it special, like finding that the swans you found on your bed when you arrived have turned into a sea turtle when you return from breakfast, followed by an elephant the following day! 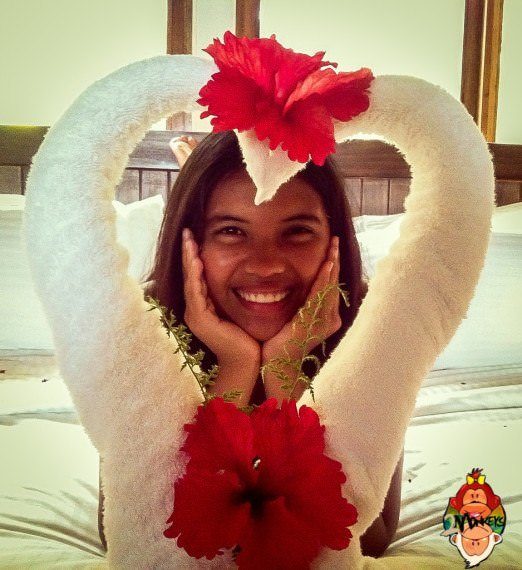 Beautiful…And the towels are nice too!

If you’ve already explored Pacific and Central Costa Rica and think you’ve seen all the country has to offer, think again; the combination of jungle waterways, Caribbean vibes and raw nature make a visit to Tortuguero National Park one of the best things to do in Costa Rica.  A true paradise like no other.

Looking for more things to do in Costa Rica? Check out How to spend 5 Awesome Days in Manuel Antonio, Costa Rica!

Where next – Puerto Viejo

Note: We were invited guests by the hotel and all opinions and text are all mine!

List of the Best Luxury Hotels in Barbados @Barbados