It has been our ultimate travel dream to see Antarctica together ever since we started our joint adventure almost four years ago. There are many reasons why we’ve always wanted to go there; the remoteness, the wilderness, the barely-touched landscapes and the fact that Antarctica does such an amazing job of repelling humans! It is also the 7th continent of the world, which makes it even more alluring. Oh yes and penguins, it’s basically all about the penguins!

On December 7th, 2016, it finally happened – we spent our honeymoon on a 16 day Patagonia and Antarctica cruise with Hurtigruten, on the MS Midnatsol!

Here’s our daily ‘ship’s log’ of where we went, what we saw, what we did and photos that are going to put Antarctica at the very top of your list of travel goals!

How to Choose the Best Antarctica Cruise

We’re Spending our Honeymoon on an Expedition Cruise in Antarctica 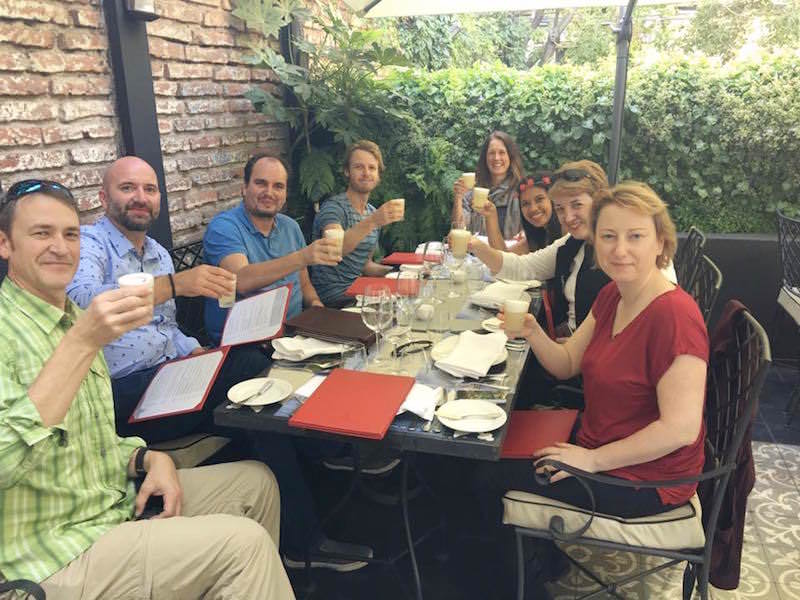 We started our journey to Antarctica with an overnight stay in a very nice hotel in Santiago de Chile, which was also our first opportunity to meet the group we would be traveling with for the next 16 days.

Linda Garisson – Industry goddess of all things cruise at About.com

Elspeth Callender – Australian travel writer (who lives in the woods)

As soon as we were checked in and had prepared everything for the next day, we headed out for dinner together to get to know each other properly and get ready for an early start the next morning. Obviously this means we ate a lot of seafood and drank Pisco Sours!

Our real journey began with an early morning charter flight from Santiago de Chile to Punta Arenas. This was all part of the expedition cruise arrangements and so was also organized by Hurtigruten. The flight itself came complete with a spectacular aerial view of the Southern Patagonian Ice-fields, the immense mass of glaciers that spans the border between Chile and Argentina. We had flown 1362 miles directly south, so as soon as the plane doors were opened, we could feel that the hot, slightly sweaty air of Santiago had been replaced by the fresher, cooler sea breeze of southern Patagonia. A short bus ride from the small airport to the port and we saw our temporary home for the next 15 days – Hurtigruten’s MS Midnatsol. This 130 metre long, ice class 1X ship is capable of safely pushing its way through up to half a metre of sea ice and comes equipped with essentials like a sauna, open-air hot tubs, two-storey panoramic viewing deck, two restaurants and two bars – No matter what happened at sea, we were going to be OK!

As soon as we cleared customs we boarded the ship, checked in, then had the rest of the day the hang out on the ship until dinner, followed by the captain’s welcome and the introductions of all the expedition crew.

That night we pulled away from the dock and headed for the Chilean Fjords!

When we woke up the next day we had passed through the Magellan Strait and were cruising through the Chilean Fjords with towering green mountains on either side of us. After a quick briefing in the morning, we got ready for our first excursion in the tender boats. Dressed in our expedition waterproof jackets and special Antarctic landing boots, we all went down to the tender pit to climb into the small boats for the first time. These brand new, specially designed polar exploration ribs can hold up to 22 people fully loaded, can potentially be punctured multiple times without sinking and are powered by a new generation of 200 hp clean diesel outboard engines. Driving rain had set in as we were leaving, but no one cared as we took off through the fjord towards our first truly amazing natural sight of the journey, the Garibaldi Glacier!

That evening we sailed on through the fjords towards our next stop, knowing that the journey was only going to get even better! 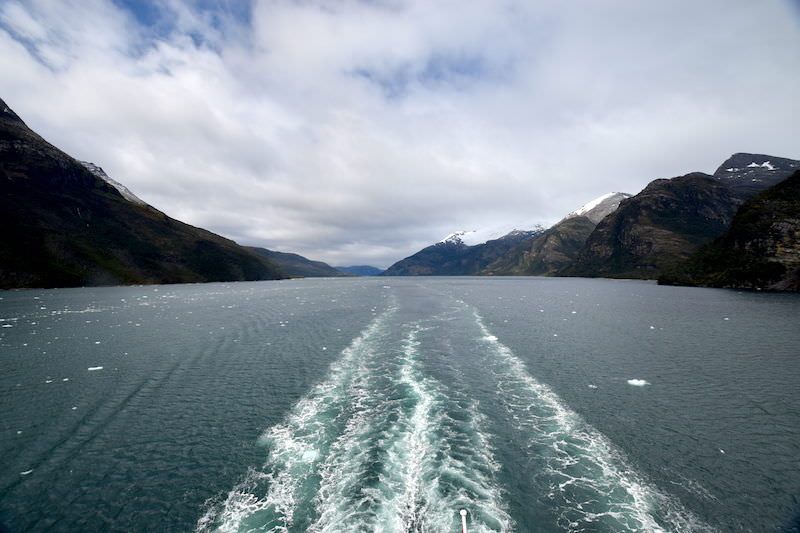 The next morning we had already sailed through the Beagle Channel and arrived at Puerto Williams, officially the southernmost town in the world (not to be confused with Ushuaia, the southernmost city, and slightly further north!)

Here we were really fortunate to have the chance to be taken kayaking with David Mocke, a world champion surf ski kayaker from Cape Town, South Africa. In full thermal gear and dry suits, we paddled the edges of the Beagle Channel in 4 deg centigrade water with mountains surrounding us on all sides. In the afternoon we were free to go out and explore Puerto Williams, which doesn’t seem like much on the surface, but instead is one of those places where you really have to slow down to see the life happening all around. 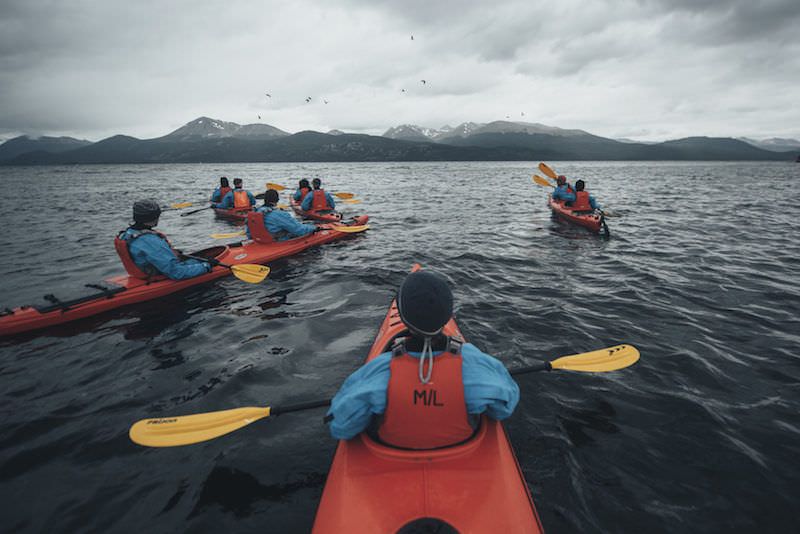 Patagonia is such an awe-inspiring place and the perfect way to build up to a journey like Antarctica!

Early in the morning, we arrived at our final landing point of South America before we would strike out south across the Drake Passage to Antarctica. Before the opening of the Panama Canal, the only way for large ships to cross between the Pacific and Atlantic Oceans was around Cape Horn. The strong winds and currents where the two oceans meet around Cape Horn make these seas tempestuous and extremely unpredictable, hence the hundreds of shipwrecks to its name.

Luckily for us, the weather and the waves were quite calm, allowing us to land the tender boats on a small area of the stony beach. From the beach, we climbed a long wooden stairway to the table-topped plateau, where there are only a utility shed, a small chapel and a lighthouse manned by a single lighthouse keeper, his wife, and their two young children. They live alone on the island for most of the year and the only other people they have to talk to are the occasional tourists making landings on the island. That afternoon we re-boarded the ship and set sail for across the Drake Passage and towards Antarctica! 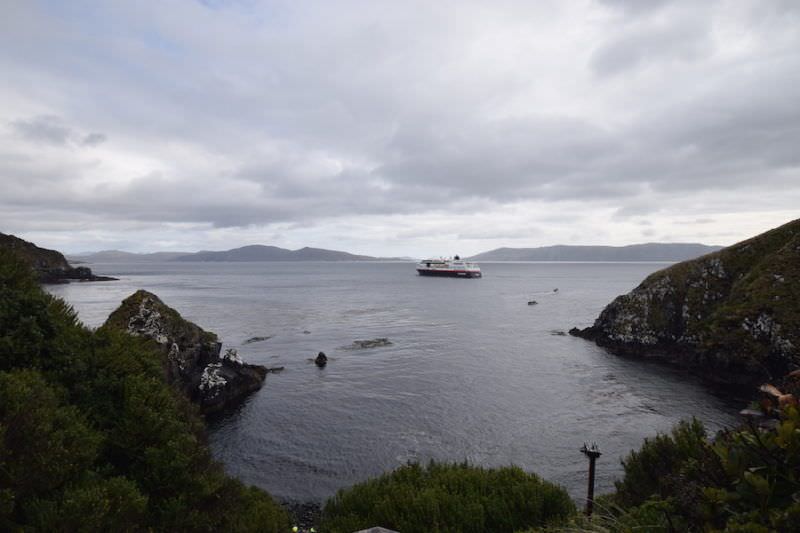 It takes a full day and night to cross the Drake Passage, even on a ship like the MS Midnatsol. The waters in this area can be extremely unpredictable, with huge waves causing ships to pitch up and down in the water. We had been warned that many passengers suffer from sea sickness on the crossing, which turned out to be true for Kach who spent most of it in bed! As we approached what is known as the Antarctic Boundary line where we crossed into Antarctic waters, the colder air and water currents from the south mixed with the warmer currents of the north causing a thick hazy fog. For a long time, this was all we could see. We were extremely lucky with the weather, which was very mild for the Drake, with only a few patches of big waves. A long day at sea passed very pleasantly, with two open-air hot tubs on the top deck and the panoramic viewing lounges to sit and watch the ocean go by. There’s also an incredible view from the sauna!

Our first sighting of land came early the next morning as we approached the South Shetland Islands, as a small group of the island near the northern tip of the Antarctic Peninsula. Even after just one day of open ocean, the first glimpse of any kind of land one the horizon stirs excitement and most of the passengers lined the decks outside. Slowly rising out of the black sea, the rocky, snow covered island stood out against the gray sky. Named for its half-moon shape, the Half Moon Island is home to a large colony of chinstrap penguins and several types of seal depending on the season. We spent the morning taking photos of the incredible scenery until we had our first chance to set foot on Antarctica! 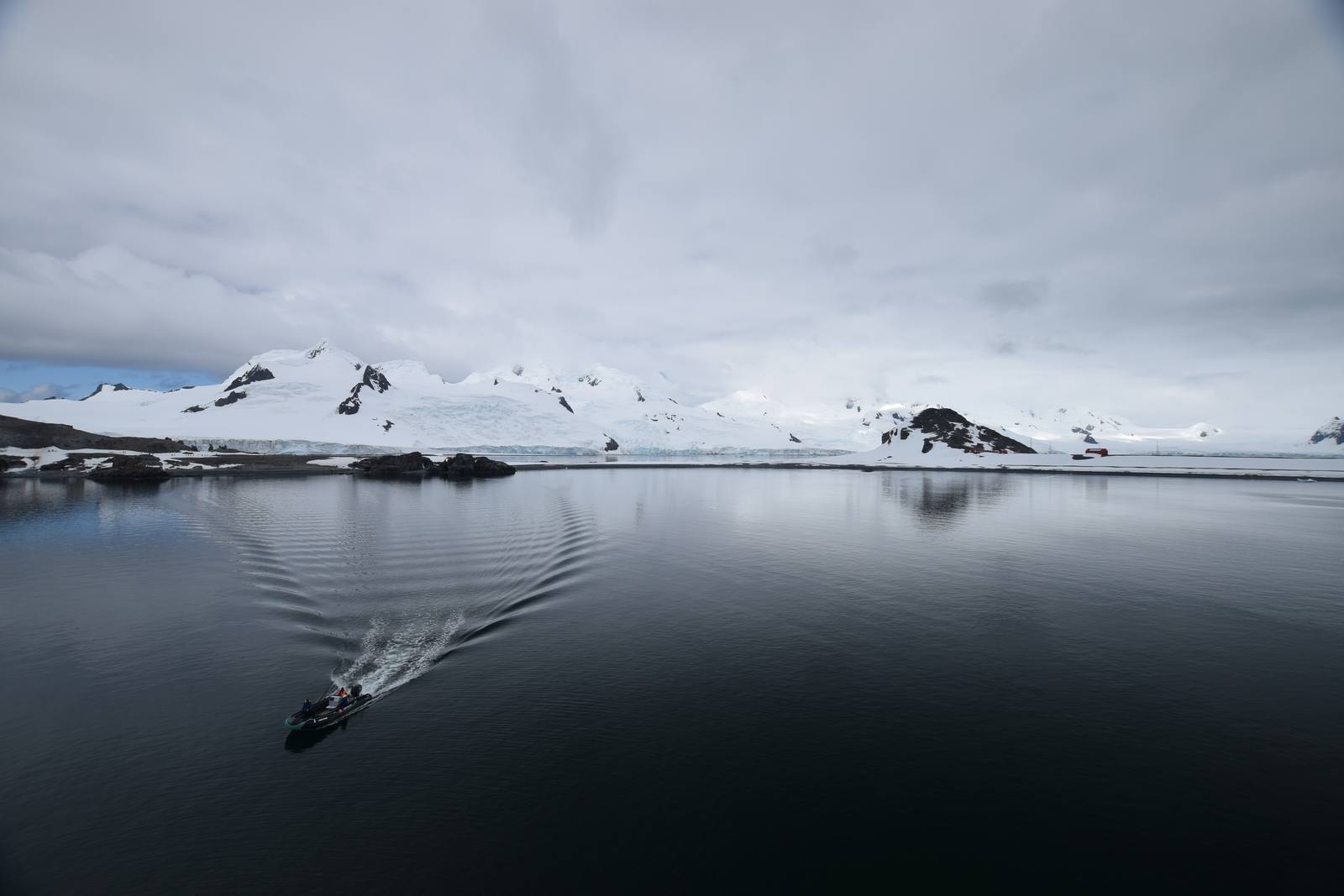 We boarded the tender boats, and the driver navigated some chunks of floating ice to reach the stony beach where Expedition Leader, Tudor met us for a quick briefing. Right from the beginning, there were penguins everywhere! While we had to maintain a minimum 5 meters from them, they could do whatever they wanted, including waddling right up to us as if we weren’t even there! We had 90 minutes to explore the 2000 meters of walking path across the island, including a massive penguin colony on the rockiest part of the island – literally thousands of them!

The most common inhabitants of the polar desert, penguins often huddle up this way to conserve the little precious heat there is. Straying too far from the colony can be detrimental to their health despite their incredible layer of adorable insulating feathers. Since we’ve arrived during austral summer, we’ve been able to observe much of their activities that mainly involve frolicking and taking turns in replenishing warmth. Getting to see these lovely denizens of the South Pole in their natural habitat was as equally important as setting the foot on the seventh continent, and icing to the cake that Antarctica really is. 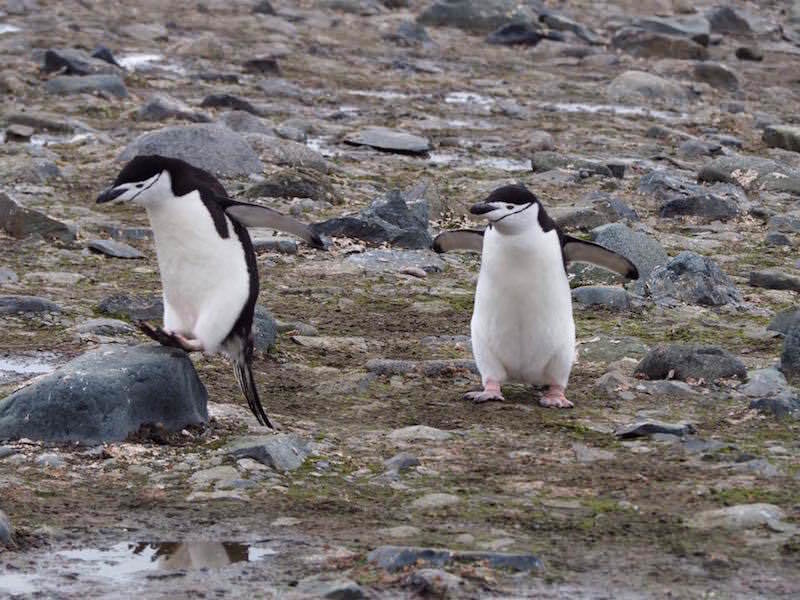 Before we left Half Moon Island to go back aboard the ship, we had a chance to do one of the coolest things we have ever done – swimming in Antarctica! With the sun out in full force stripping down to just a pair of board shorts was actually a relief from the thermals and thick jacket. Diving into the 0 deg C water was not immediately painful, just numbing, but after a ten seconds thousands of needles started stabbing all over my body, so I quickly got out again! The amazing part was that I could have stayed out there in the sun for hours with nothing but a pair of shorts on! 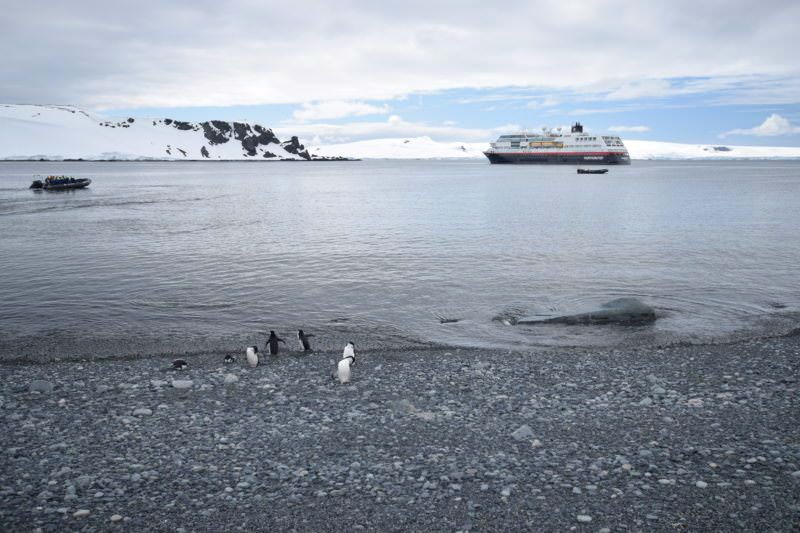 Note – We were traveling as guests of Hurtigruten on board the MS Midnatsol, but all opinions, ideas, penguin selfies and Jonathan’s girly screams about how cold the water was are our own!

Discover St. Vincent and The Grenadines in the Caribbean @DiscoverSVG