Nice (pronounced as Nis) is one of the towns of Côte d’Azur in the southeast of France, facing the Mediterranean Sea. It is one of the go-to places of Europeans during summer where they can get their dose of sea and sand. While it may be one of the expensive places to visit in France, there are still inexpensive and free things to do in Nice.

For as long as I can remember, I have always been mesmerized by the beauty of this French Riviera. How they are described in books or featured in movies is so breathtaking. I’ve always wanted to visit it until I had an opportunity to check out it for myself.

If you will be travelling to Europe and you have decided to visit Nice, it is best to plan your visit in June. The temperature is already warm during the day but not too sweltering hot. In addition, it would not be too crowded (and expensive) as they would be during August. You have an option of flying in to Nice from any of the major cities like Paris, Barcelona or Rome.

There are also direct trains from Paris to Nice. It will take almost 6 hours to reach Nice from Gare de Lyon in Paris. I flew in from Rome using one of the budget airlines, Vueling.

There are a lot of hostels in Nice. Airbnb is also another option for accommodations in Nice. Since I was travelling solo, I preferred to stay in a hostel to meet new people. I stayed in Antares Hostel situated near Gare de Nice-Ville.

It is a long road that stretches the beachfront of Old Town. French people are big on people-watching. So why not do what the French people do and watch the sunset as you walk along it? The beach which is divided into private and public areas is just a few steps away from the road so feel free to explore them. Just don’t forget to secure your belongings in lockers along the private areas where you can also rent out a chair and an umbrella while strolling on the fine sandy shore. It was really NICE! Though the public beach is open to anyone, it is rocky than the private ones. Photographs? You bet, but I did not take any fun pics in the beach in respect to other people there as if you may not ask, French Riviera beaches are known to have nude sunbathers (eyes googling).

To capture the panorama of Nice (or the Promenade des Anglais to say the least) in a photo, one must visit Vieux Nice.  It is a park that sits on top of a hill where you can see almost all of Nice and trust me the view from atop is really spectacular! There are two options of going there: you can take the stairs going up to the park or you can take the Castle Hill elevator located near the post office at the foot of the stairs. Depending on the number of people going up, there could be a waiting time of 5-10 minutes before you can enthral yourself with the picturesque views of the old town of Nice, the beach, Promenade des Anglais snaking along the horizon. On the other side of the park, one could see the Port of Nice filled with yachts. Awesome!

You can walk towards Jardin Albert I to see their outdoor art installations, watch street performers or stroll through the park which features a mist park that sprays water mist to you as you walk through the park. Perfect to cool down when the day gets too hot. Then, the opposite side of the park is the Miroir d’eau.

If you manage to wake up early to explore the city, do not miss Old Town. There is a farmer’s market every weekend and one can find fresh produce especially from Provence. There are a lot of restaurants and stands in Old Town that sells socca- a local delicacy made of chickpeas and cooked like pancakes. It is best eaten when hot. We tried socca from a restaurant called Gustoso.  There are also other specialty foods like Salade Niçoise, Tourte de Blettes (tart made with Swiss chard, raisins and pine nuts) and Moules Frite (mussels with french fries).

This is real reason why I really wanted to visit the French Riviera. This quaint town on top of a rocky mountain boasts a medieval-like neighbourhood. It takes 10 minute train ride which cost ($15) to reach Èze-sur- mer from Nice Ville train station. Unfortunately, there was a transport strike that week so there were no buses going up to Èze village. From the train station, I decided to hike up to Eze village through Nietzsche trail.

Nice is a city in France. To visit Nice and the rest of the countries in the Schengen area, Philippine passport holders must secure a Schengen visa.

Day 1: Rome (to Barcelona) to Nice

Prior to this trip, the airline changed my flight schedule weeks after booking the flight.  So instead of flying directly to Nice from Rome, I had to make a quick layover to Barcelona as there were no flights to Nice from Rome at that time. Some friendly advice to you folks, be prepared if these things happen. Make sure you provide enough leeway in your schedule if in case it happens. I was scheduled to depart Rome around 2pm but we did not leave until 4pm. I was worried that I will miss my flight from Barcelona to Nice. But alas, I made it! Yay! Then, I arrived in Nice in the evening and took the bus going to the city centre.

It was a Sunday when I arrived so there were no restaurants open but luckily there is a Monoprix supermarket right next to the hostel so I decided to buy some food for the next day.

I have decided to walk to St. Nicholas Russian Orthodox Cathedral for its interesting architectural design similar to Saint Basil’s Cathedral in Moscow. However, I was not sure then if they permit people to look inside the church but as there was an ongoing service at the time, I decided to just admire the architecture from the outside. I walked to Place Massena via Avenue Jean Médecin which took 30 minutes. We passed by Basilique Notre Dame de l’Assomption. The façade looks similar to the Notre Dame in and you’ll get to enjoy strolling through the Miroir d’eau and Jardin Albert I while having gelato as you people watch.

Afterwards, you can walk to Vieux Nice through the Old Town and take the elevator going up to Castle Hill and be ready to be greeted by the dazzling views. At Gare de Nice Ville I booked a train ticket going to Èze. The next train available will be for the next hour so I bought some early dinner while waiting.  The ride takes 10 minutes from Gare de Nice Ville to Èze-sur- mer where you can hike up to the Èze village via Nietzsche trail as there was no available bus going to the village. The hike takes an hour (or more) to finish depending on your endurance but don’t lose heart,  because it will totally be worth it!

(Wink) I stayed up there for 2 hours to admire how majestic the place was. Then we hikedback down to Èze -sur- mer.

I woke up really early to catch the sunrise along Promenade des Anglais but it was not what I expected because it was cloudy at the time. Before long, I hailed a cab driver to go to the airport to catch a morning flight to Barcelona.

Extra Tip: Check out Plumguide for the best holiday homes and vacation rentals in Nice. 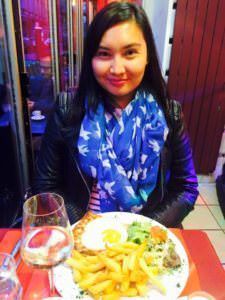 Mitch Barican is a full-time science teacher. Born and raised in Manila but now lives in Singapore.  She’s a foodie traveller, a Game of Thrones fan, and a beach person and currently planning another adventure to cross off things in her bucket list.