Home » Travel Blog » 25 Things To Do in Toronto, Canada [With Photos]

Found along Lake Ontario, is the capital of Ontario; Toronto. Though a metropolis full of towering skyscrapers, Toronto has natural attractions including luscious parks. It is considered one of the safest cities in the world even though the population is almost 3 million.

Though it looks classy, Toronto also has quirky parts and streets that you would love to enjoy. You will surely need to stop in this city if you are going to Niagara Falls. Though there countless things to do in Toronto, we’ll sum it up to you in 25 must-do activities.

Here are 25 things to do in Toronto

1. Rocket to the top of CN Tower 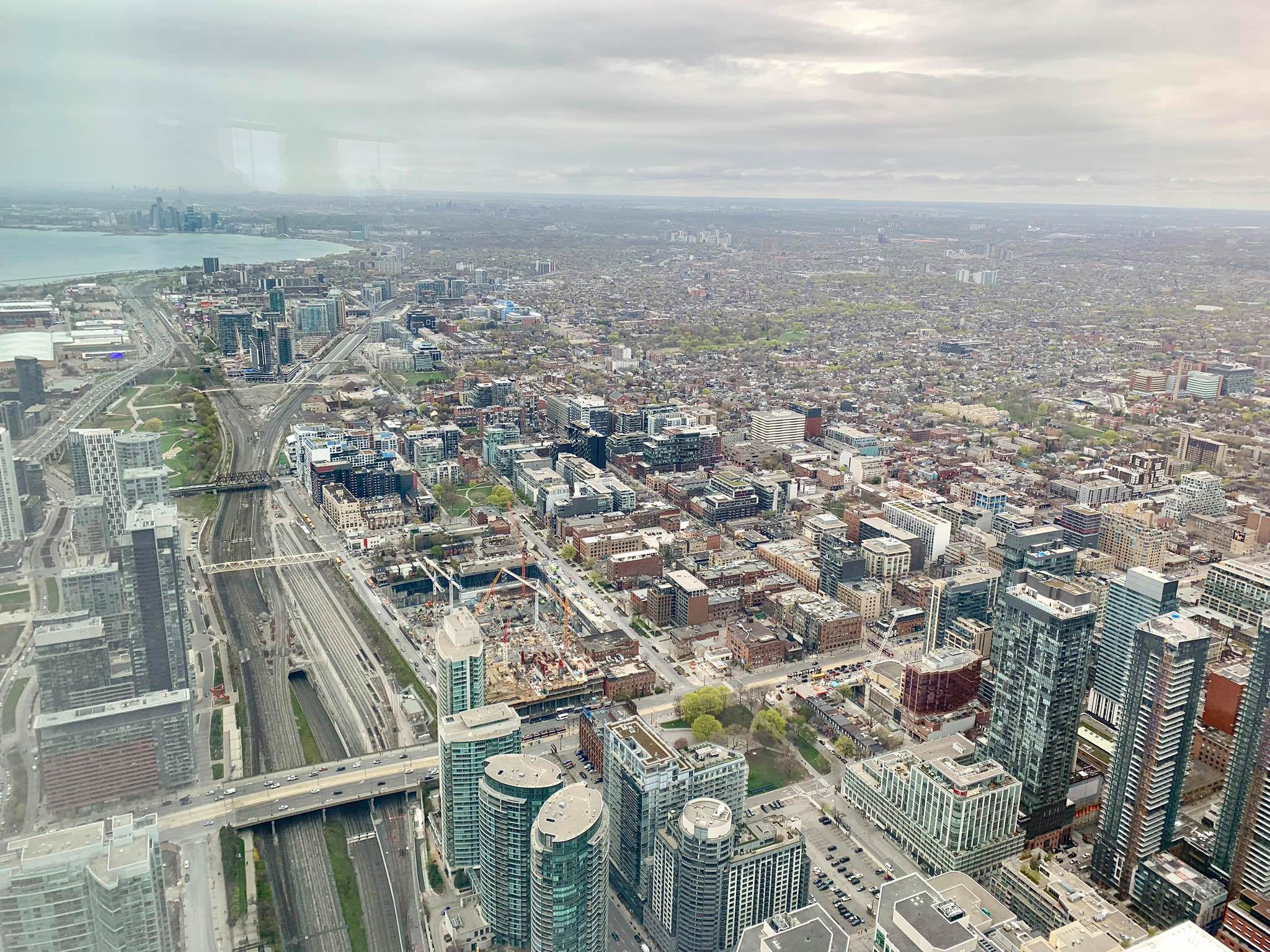 The Canadian National Tower is one of the top things to do in Toronto. It is 1815 feet tall and declared as one of the Seven Wonders of the Modern World. There are three observation decks in the tower; the Glass Floor – Observation Terrace, Indoor Lookout Level, and SkyPod at 1122, 1135, 1465 feet, respectively. For thrill-seekers out there, there is EdgeWalk where you can walk around a pod at 1,168 feet from the ground; though it is closed on bad weather days. If you are hungry; feel free to dine at the 360-degree restaurant.

The ROM showcases world culture, art, and natural history; it is Canada’s largest museum. With more than 6 million items in 40 galleries; you would be in awe and could spend hours touring this place. From fossils to ancient artifacts, to Canadian history; you’ll definitely get full of knowledge.

Named as the world’s best food market by NatGeo on 2012; St. Lawrence Market is a public marketplace in Old Town, Toronto. The building has been there since 1803; so not only could you buy food but also appreciate history and architecture. Enjoy looking for organic food options, and you get to support the local community!

Known before as the Island of Hiawatha; Toronto Island is a chain of small islands in Lake Ontario. Ferry from the terminal to the islands. Rent a bicycle at Centre Island and look and tour around the whole island. You can also walk, paddle, or have a picnic.

On the southeast of CN Tower, you will see a public aquarium filled with marine life; Ripley’s Aquarium of Canada. Submerge yourself has more than 20,000 aquatic animals. There are 10 galleries showing marine and freshwater habitats from all over the world. You can touch some of the species as well as see dive shows.

Spanish for the hill house, the Casa Loma is a gothic revival styled mansion with gardens in Midtown Toronto. Check out the gorgeous rooms of the building, especially the Oak Room and Conservatory. It also is like a museum and has a vintage card exhibition in the carriage room. It’s a popular filming location; movies like X-men, Harry Potter, Beauty, and the Beast and the Descendants have filmed here.

7. Bring your camera at the Graffiti Alley

Home to vibrant street art is Rush Lane, now called the Graffiti Alley. Before street art wasn’t accepted in Toronto and was like vandalism, but over the years it has been improved. Because of the great artworks, you might want to pose near one; it will surely be a great Instagram post!

High Park is an oasis found in the busy city of Toronto. It doesn’t only offer a view of gardens and nature but also sporting facilities (ice skating, baseball) and a zoo. It is 161 hectares big so you would surely find a perfect spot to relax. In spring, when the Cherry Blossom bloom; it would be so divine.

9. See the Hockey Hall of Fame

Hockey is the national sport of Canada; you can see great achievements in the Hockey Hall of Fame. Learn the history of ice hockey through the museum and hall of fame. Don’t forget to take a picture with what people call the “holy grail”; the Stanley Cup.

10. Buy anything at Toronto Eaton Center

The CF Toronto Eaton Center, North America’s busiest mall, is a downtown shopping and office complex in Toronto. With over 250 shops and restaurants, you could surely buy something for yourself or your family. After spending the whole day at attractions, go to the Eaton Center, for an excellent shopping atmosphere.

The AGO is one of the most distinguished art museums and one of the largest in North America. There are more than 90,000 collections; both old and new from Canadian Art to Modern Art. The inside isn’t the only place where you can see the beauty, but the architecture is one thing to behold. You can also go on a guided tour too.

A designated Historic Site and a Golden Tap awardee, Steam Whistle Brewery is a great place to visit in Toronto. Enjoy a very informative tour and increase your knowledge about brewing. Have a snack and enjoy the free beer the company has to offer!

13. Walk around the Distillery District

A natural, historic site of Canada, Distillery District is a highly praised village. The district has the most extensive collection of Victorian-era architecture. There are live theatres, cafes, restaurants, boutiques, and shops in this neighborhood; a great thing to do in Boston.

With over 2 million collections, the Toronto Public Library is the most massive public library in Canada. It is a gorgeous library, especially the interior. Book lovers would find this heaven on earth. For those Sherlock Holmes lovers out there, check out Sir Arthur Conan Doyle’s unique collection in the Library.

PATH is a web of underground tunnels and walkways in Downtown Toronto. With a total of 30 kilometers; it is the largest underground shopping complex. More than 50 offices and buildings are connected through this network; so you could get to another tourist spot via walking underground.

16. Stroll at the Harbourfront

Located in the Lake Ontario’s northern shore in downtown Toronto is this quaint neighborhood. Have a picnic or a tan on HTO Park which is like a beach. You can also stroll around open spaces to see the beauty of the lake, cruising boats, and the skyline.

Be it a musical, opera, Broadway or West End shows or a concert; you should see at least one. There are dozens of theatres to choose from like Royal Alexandra Theatre or Princess of Wales Theatre that have beautiful architecture inside and out. See the schedules, and you might see a performance of a lifetime.

The Bluffs are long cliffs near the shoreline of Lake Ontario; the highest point measures 300 feet. Have a picnic and get remarkable views of the lake. You could also go to the lovely beaches and go for a swim.

19. Roam the block of Kensington Market

The bohemian heart of Canada, Kensington Market is a multicultural area in Downtown Toronto. It is a quirky neighborhood where you can buy different kinds of food, snacks, and also clothing. Find art pieces like the Garden Car in Kensington Market. Visit on Winter Solstice to experience the Kensington Market Festival of Lights.

The University of Trinity College was established in 1851 by an Anglican Bishop in Toronto. The buildings, especially the main one and the chapel have absolutely stunning architecture. Due to its English heritage, you would see people wearing gowns at dinner and scarves and blazers; kind of have a Harry Potter Feel.

From Jack Layton Ferry Terminal take a ferry to the Toronto Islands. Go to either Centre Island, Ward’s Island, or Hanlan’s Point Docks. Enjoy not only the destination but also the voyage through Lake Ontario.

With many Chinese residents and businesses; Chinatowns are created in Toronto. The most popular one is the West Chinatown along Spadina Avenue. Check out the shops and eat some delicious Chinese food.

In the middle of the bustling city on the East of Toronto is a free botanical garden; the Edwards Gardens. Enjoy a stroll among the winding paths and appreciate the manicured lawns. It is a beautiful place to take pictures, especially for a prenup or weddings.

Queen Street is a neighborhood famous for fashion, music, performance and the visual arts scene in Canada. Try to eat different cuisines in trendy restaurants, enjoy nightlife at bars. You may add items in your wardrobe from shops there or buy something unique at antique or art shops.

25. Watch a game or Shows at Rogers Centre

The Rogers Center, SkyDome before, is a stadium that has a fully retractable roof. It is home to professional sports teams in Toronto. Games aren’t only done in the Center but also concerts or show especially if there is a large crowd.

1. Is it safe to travel to Toronto?

Toronto is considered to be the safest city in North America. Even though it is safe, still practice precaution; keep an eye on your belongings, avoid walking alone at night and don’t go to strange non-touristy neighborhood. However, in case of emergencies, dial 911.

2. Should I get travel insurance before heading to Toronto?

I always recommend buying travel insurance since we don’t know what will happen to us. Check out Safetywing, my insurance provider.

3. Is it expensive in Toronto for tourists?

Toronto is as expensive as big cities in the US, sometimes more. Midrange travelers should prepare at least $100 per day when visiting, for luxury travels maybe twice more.

4. When is the best time to visit Toronto?

The best time to visit Toronto is from April to May to June (for Spring), and September to October (for fall) as it has better weather and tourists are lesser. Snow usually falls from November to March, so if you want to witness that, you can visit those months; however, it will be cold.

5. Where should I stay in Toronto?

You can stay in Downtown as there are tourist sites and very safe.

6. What souvenirs should I buy in Toronto?

You can buy a Canadian blanket, a Toronto’s professional sports apparel like caps or jerseys, or maple syrup.

8. How to get around Toronto?

You can easily navigate Toronto by public transportation like bus, streetcar, or subway. You can also walk through PATH.

We hope you have fun on your trip to Toronto and enjoy this list of 25 things to do in Toronto.

6 Best Things To Do in Hangzhou, China [with Suggested Tours]

10 Best Things To Do in Rhode Island, USA [with Suggested Tours]