Are you planning to travel to Ghent, Belgium soon? Read our tips below on the things to do in Ghent, Belgium with suggested tours! You’ll surely have a lot of fun!

A confluence of the Leie and Scheldt rivers, the port city of Ghent “Gent” is located. It is the capital and largest city of the Flanders region and the second-largest municipality in Belgium.

Some people might never hear of Ghent before unlike Brussels, Bruges, and Antwerp. Despite being the country’s oldest city, Ghent is truly the gem of Belgium. This unique and romantic place is rich in medieval and classical architecture. The whole city looks like an open-air museum. The vibrant colors enrich the center of trade and culture. Its industrial ambiance is a perfect contrast for the medieval building and spectacular landscape views. This region from Western Europe is not all chocolates, waffles, and beers.

Let’s all find out what are the things this city has more to offer!

15 Things that you should do and visit in Ghent, Belgium

Belfry of Ghent is the iconic symbol of the town is a 91-meter-tall UNESCO World Heritage tallest belfry in the country. This symbolizes the city’s prosperity and independence. If you want, panoramic, 360-degree views of the city, definitely visit the Belfry of Ghent!

Built-in 1180, this medieval structure is known as “Castle of the Counts” in Dutch. In the past, Gravensteen was subsequently re-purposed as a court, prison, mint, and even as a cotton factory. And today, it serves as an armory museum and displays weapons for punishments and torture chambers from the past.

This church was built in the 13th century as a replacement for an earlier Romanesque structure. It features the Scheldt Gothic style that has a blue-gray stone from the Tornai area.

Saint Nicholas church is one of the oldest and most prominent landmarks in Ghent, Belgium. The central tower served as an observation post and carried the town bells until the neighboring belfry of Ghent was built. Inside the church is one of the most romantic organs, built by the famous French organ builder Aristide Cavaillé-Coll.

Graslei and Korenlei are parallel quays stretching along the Leie river. The beautiful facades of the medieval architectures reflect and mirrored in the water creating a picturesque view you can enjoy while sipping in romantic cafes surrounding it.

Vrijdagmarkt or “Friday Market” in English is a historic city square in Ghent. Its name came from a tradition way back the 12th century, hosting market stalls during Fridays. These days, they stage a market on Friday morning and Saturday afternoon with bustling locals and tourists.

Sitting in the shadow of Gravensteen, this historical cobblestone-alley neighborhood is filled with various ethnic restaurants, shops, art galleries, and cafes. A perfect place for a stroll.

Suggested Tour: Walking Tour from Friday Market to the Cathedral

This 10th-century 89-meter-tall Gothic cathedral is the same place where Charles V was baptized in 1500. It houses Ghent altarpiece or the Adoration of the Mystic Lamb, a masterpiece of European art and one of the world’s treasures. 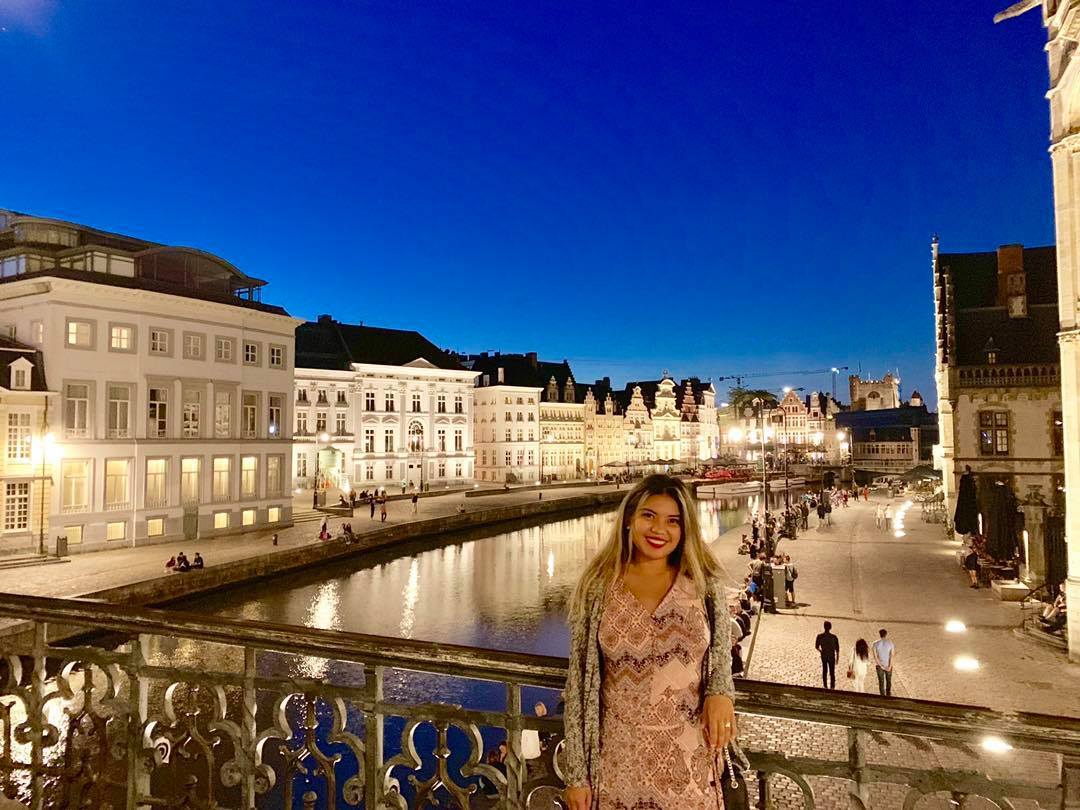 This bridge is the perfect spot for picture-postcard views of Ghent’s 3 famous towers; Saint Nicholas Cathedral, Saint Bavo’s Cathedral and the Belfry of Ghent. You can also see from this point of view the old harbor and Castle of the Counts. Don’t hesitate to take snaps from this majestic bridge!

The Ghent City Museum “Stadsmuseum Gent”, (STAM) in short, is the home of the artifact displays and interactive multimedia of the long history of Ghent. With an audio guide during the tour, you can have a glimpse of Ghent’s past, present, and future.

This place is where people express their creative and imaginative side. Graffiti Street is full of random spray-painted art alleys. It constantly changes for this is a public gallery for street artists. Talk about a great background for your Instagram photos!

If you get tired of an all-day tour, it’s time to rest and relax here at Citadel Park. It has a lot of interesting sculptures, botanical richness, fountains and pathways to explore.

A 13th-century gothic fortress named after Geeraard Vilain. His nickname was based on his dark complexion and hair color “Geeraard de Duivel”. Throughout history, it has been used as an armory, a monastery, a school, a bishop’s seminary, an insane asylum, and a prison.

Belgium is known for its beers. There are a lot of varieties to try. Usually served in bottles and glass and not in cans. Their unique way of brewing makes them the best in the world. It won’t hurt to try a glass or two cause hey! It’s in Belgium.

Isn’t it romantic? A boat ride passing by historical buildings. The canal cruise is a must in Ghent. Learning the city’s cultural heritage while gliding by the water is a fantastic way of sightseeing.

This ruin dated back in the 7th century. Can you imagine that? Parts of it were torn down by Charles V during the Revolt of Ghent in 1539 but still, some of its structures are standing. St. Bavo’s Abbey is covered in greenery and to preserve the site, it is only opened for visitors on rare occasions.

How to go to Ghent, Belgium from the UK

Via British Airways: (one way)

* Prices are subject to change. You can visit Skyscanner for more details about the ticket prices.

10 Best Things to do in Sapa, Vietnam [with Suggested Tours]