The heartland of the Persian civilization, Shiraz is the capital of the Fars Province and one of the most popular travel destinations in Iran. Pleasant in every season thanks to a mild climate, spring is the best time to go to evoke all the clichés Iran is famous for: jasmine-scented streets, orange blossom tea, poets and nightingales.

Located in central Iran, whether you like history, art, poetry or nature, Shiraz has something to offer even to the most demanding tourists. Get lost in its gardens, join Iranians reading Hafez’s poems while sitting on his grave and get intoxicated by the scent of herbs and spices at the city’s old bazaar.

It won’t take you long to realize that the few days allocated to Shiraz by classic tours and itineraries are not enough to fully enjoy the city but barely sufficient to make you understand that one day you will be back. 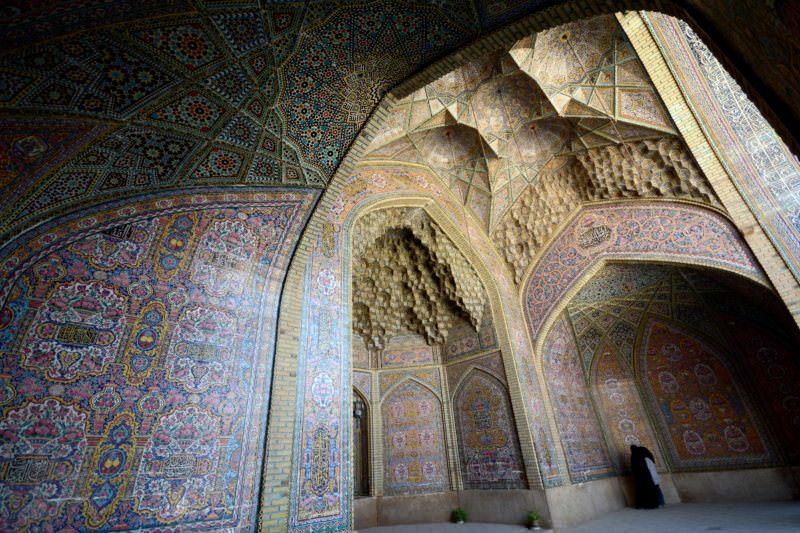 Nasir al-Molk mosque, also called the Pink Mosque, certainly is one of the places to visit in Shiraz, but why early morning? If you go by 9 am, you will enjoy a wonderful interplay of lights and shades caused by the sun rays seeping through the colorful stained glass of doors and windows. The mosque dates back to the recent Qajar dynasty and even though not too big, it’s one of the most popular attractions in Shiraz. Its decorations are mesmerizing, both inside and outside, comprising of finely intricate pastel-hued patterns, the pink roses typical of the Qajar-era art and sophisticate carvings.

2. Soak in history in Persepolis

A trip to Shiraz is not complete without a day tour to Persepolis, the ancient capital of the Achaemenid Empire. Founded by Darius The Great around 518 BC, the city was the ceremonial seat of the empire where leaders, kings and official came from all over the world to pay their respect to the head of what was one of the greatest empires of their time. Persepolis was huge and majestic, and still today we can grasp its grandeur already from its entrance, known as the Gate of All Nations, where mythological figures welcomed the visitors and protected the city from all evils. 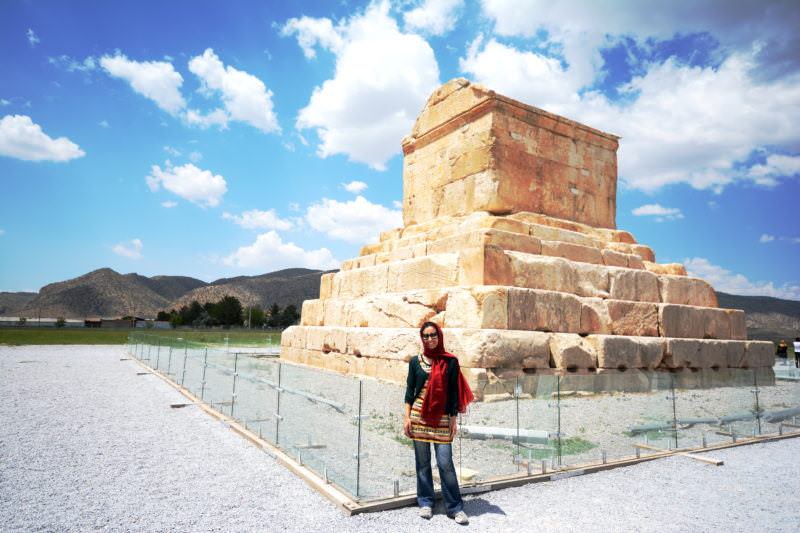 If you take a full tour (I highly recommend this), you will start from Pasargadae, about 135 km from Shiraz.

Pasargadae is the oldest capital of the Achaemenid Empire and it was founded by Cyrus The Great, whose imposing tomb is one of the main sites of the area. On your way back you will stop at Persepolis and the tour can take up to one hour because of its many different areas such as the Apadana staircase, the tomb of Artaxerses, the palace of Darius and countless carvings and decorations. 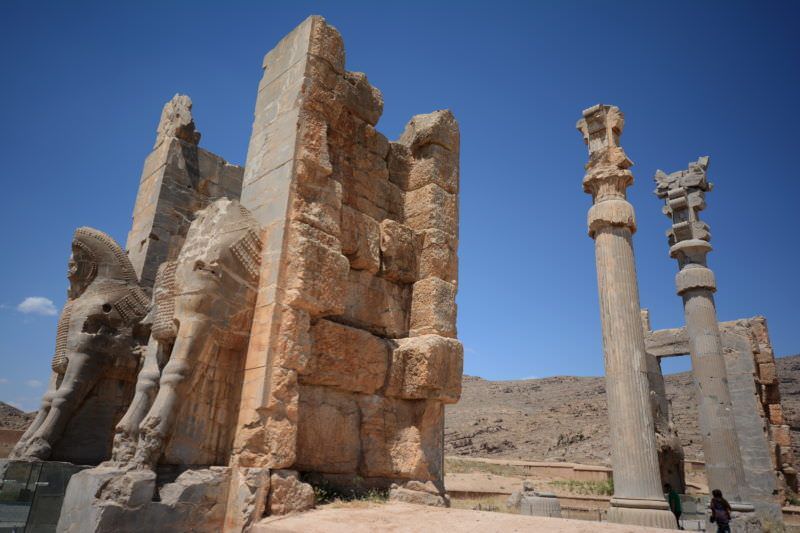 Even if you are tired, before getting back to Shiraz make sure you stop also at the wonderful Naqsh-e Rostam burial complex displaying graves from different periods of the Persian Empire.

You can arrange the tour and price with your hotel, plus entrance fee for Persepolis is 200,000 Rials (about 6 USD) and it’s open from 8 am to 5 pm.

The resting place of beloved 14th-century Shirazi poet Hafez, this mausoleum is a pilgrimage destination for Iranians. More than just a poet, Hafez still has a role in Iranians’ daily life when they need solace, advice for the future and during Yalda night, the longest of the year, when families gather around a table and read his poems. 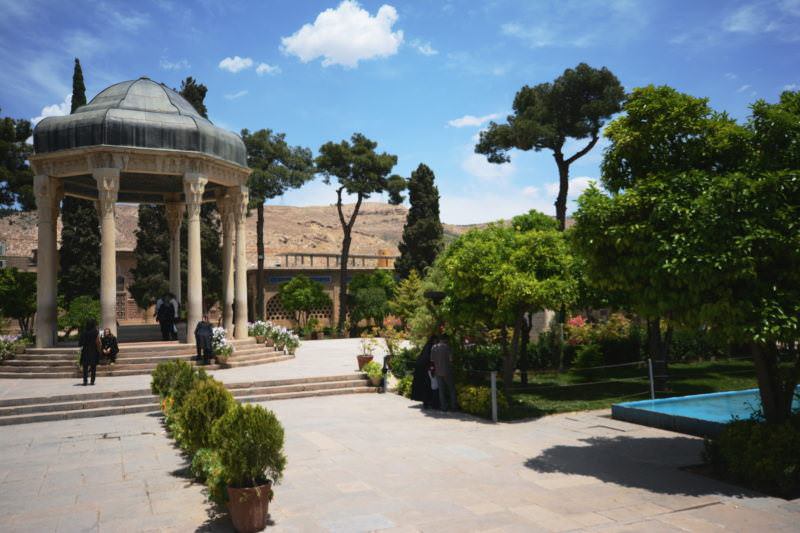 Built under the Zand king Karim Khan, the tomb is a simple white-stone grave placed under a copper roof supported by eight pillars and with a ceiling beautifully decorated with blue mosaics. Do join the crowd of Iranians sitting around the grave and chattering the evening away, maybe with a book of Hafez poems on your hands. There is a small library just beside selling Hafez poems, they also have some versions in other languages. Before leaving, you can even stop at the eatery for a tea or a warm soup.

4. Feel like a king at the Karim Khan Arg

Located in the very city center, the Arg of Karim Khan is a medieval citadel commissioned by and named after Karim Khan, king of the Zand dynasty. Built in the eighteenth century, the castle is closed to the city’s main bazaar and won’t come unnoticed as it’s a massive brick construction that served as the king’s fort and residence. 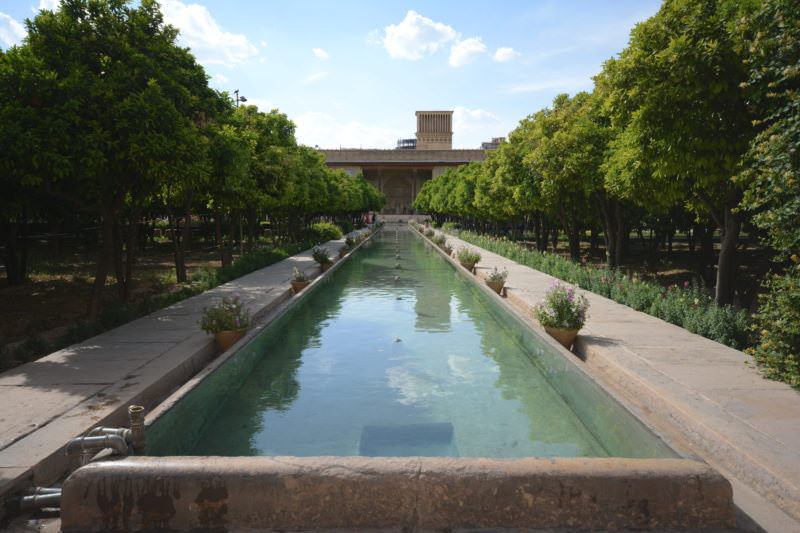 Inside the building, visit the big courtyard, the rooms embellished with frescoes and the fascinating baths, traditional hammam with all the architectural features and decorations typical of the local culture and nature. This is obviously the private baths of the royal family, but not far there are also the public Vakil Baths where you can see a slice of the old local life.

5. Enjoy the nature of the Eram Garden

The most famous among the many parks Shiraz boasts, Eram Garden was built following the principles of the traditional Persian Garden, with the water element placed in the middle. For the important role the Persian Garden has always played within the Iranian society, architecture, traditions, UNESCO has included it in its heritage sites’ list. 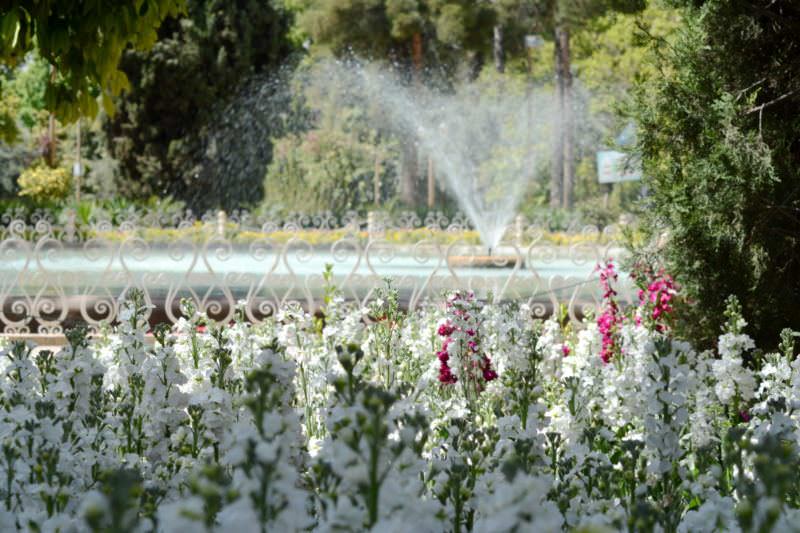 Even though the pavilion in the middle of the park was built pretty recently during the Qajar era, Eram Garen was started by the Seljuq rulers in the eleventh century. Today it’s part of the Botanical Garden of Shiraz University, and this is why it hosts a myriad of different plants, flowers and trees.

6. Walk around the intoxicating Vakil Bazaar

Absolutely not to miss is the Vakil Bazaar located right in the heart of the city, Darb’e Shahzadeh, near Vakil mosque. Considered one of masterpieces of the Zand dynasty, brick vaulted walls are among its main architectural features. 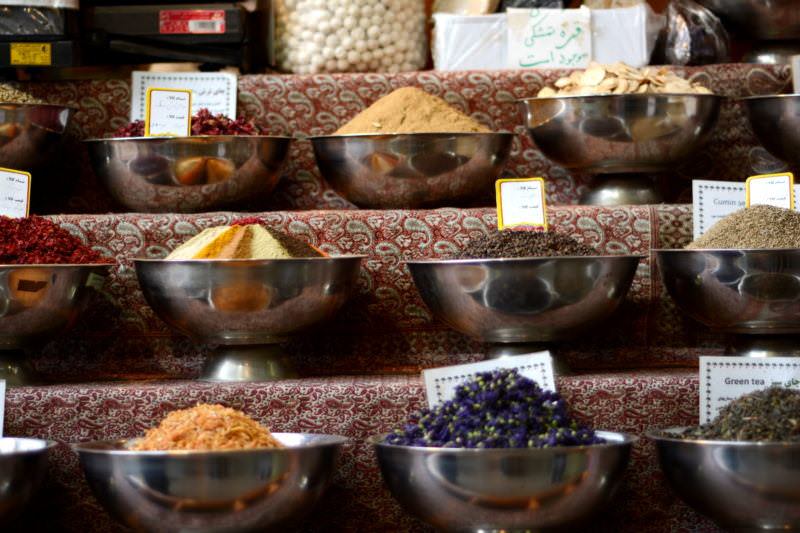 Populated by both tourists and locals, here you can shop for the most different Iranian products, from Persian rugs to saffron, pistachio, tea, spices and local sweets. While walking around the big market, try the popular khakshir, a seed-base detoxing drink.

Open daily from early morning to evening, except on Fridays and national holidays.

7. Be amazed at the Vakil Mosque

Close to the bazaar in the same Vakil historical neighborhood, don’t miss the beautiful Vakil Mosque. Built in 1773 during the rule of the Zand king Karim Khan, the mosque is 11,000 square-meter big. A forest of 48 huge pillars surrounds the menbar (pulpit), built with fourteen marble stairs. 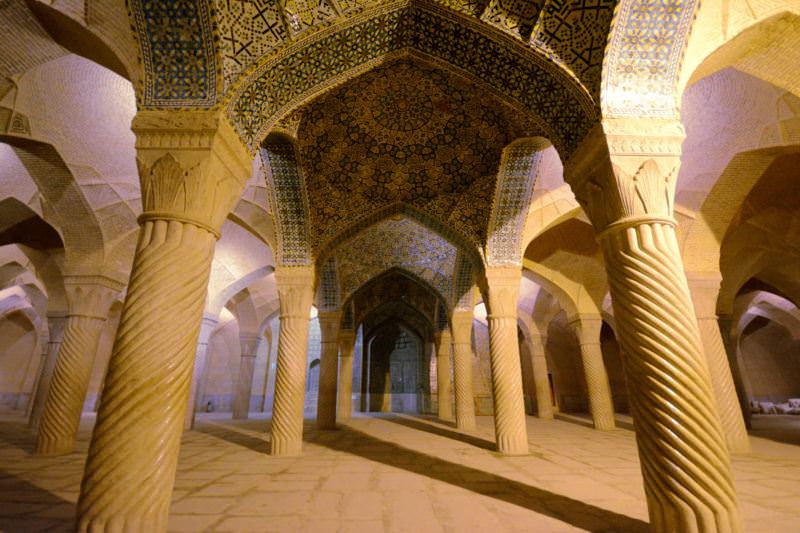 Before leaving the Vakil central district, devote another hour to the fascinating traditional baths right in front of the Vakil Mosque to have a hint of how was life back in the days, what was the role of public baths and what were the different figures within the old Persian society.

Where to Stay in Shiraz, Iran

Sasan Hotel is located in the city center and offers rooms equipped with WIFI, air conditioning, refrigerator, LED TV and especially private bathroom and toilet. The hotel has elevator and money exchange, laundry and taxi services. The price range is about 20$ even though, like for all accommodations, it depends on the season. 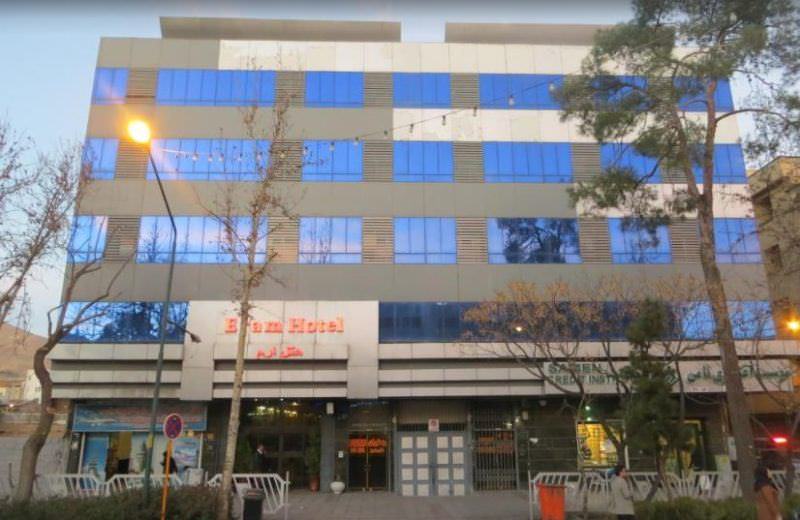 Eram Hotel is a 3-star accommodation and its price higher than the 50$ per night typical of the other 3-star in the city because it’s considered a top 3 star. Equipped with all services, rooms are comfortable and modern, the staff speaks good English. Prices depend on the season and usually range from 60$ to 150$. 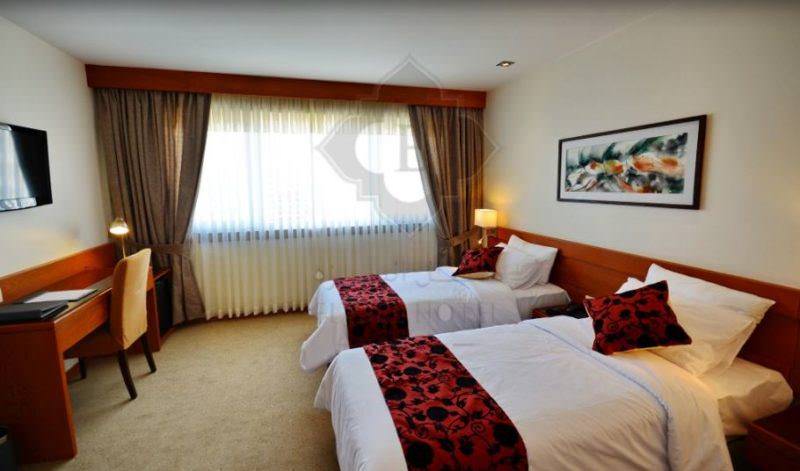 The Elysee is a fantastic 4-star hotel. Rooms are wide, modern, luxurious and with WIFI, the restaurant has an unlimited buffet for breakfast and dinner, and the staff speaks good English. Prices range around 150$, even though this depends on the season and number of people in the group. 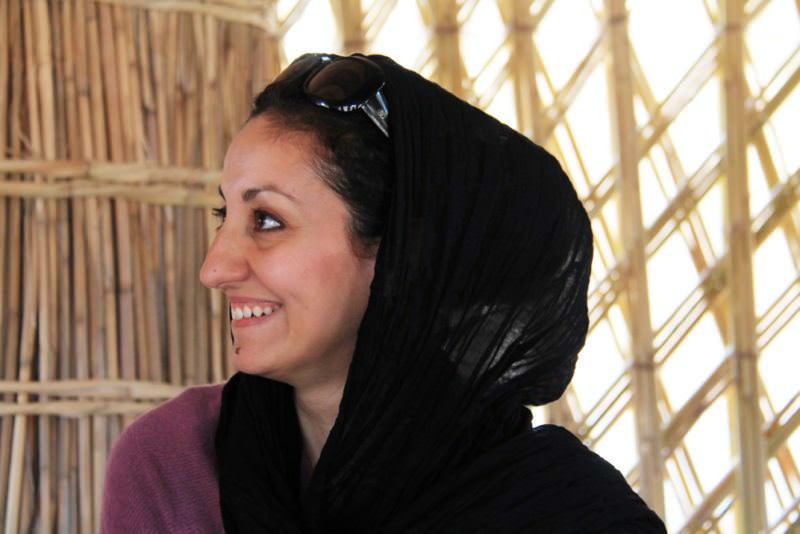 Angela Corrias is a freelance journalist and the blogger behind Chasing The Unexpected and Rome Actually travel blogs. She also updates a travel blog in Italian entirely focused on Iran, Il Mio Iran.

12 thoughts on “7 Awesome Things to Do in Shiraz, Iran @ilmioiran”

7 Best Things to Do in Hue, Vietnam [Vietnam Travel Guide]

7 Awesome things To Do in Antwerp, Belgium @wondwand