Santa Fe, New Mexico is known for its pueblo-styled architecture and has a strong sense of arts and culture. Its historic district was founded as a Spanish Colony in 1610 and has roots in the Mexican-Indian traditions. When so much of the USA has become homogenous, Santa Fe stands out as refreshingly different. From Indian artifacts to space exploration and Hispanic culture, it is a remarkable place to visit.

Without further adieu, here are Seven Awesome Things to do in Santa Fe listed in the order in which I loved them first!

1. Visit the New Mexico History Museum with the Palace of the Governors

Originally constructed in the early 17th century as Spain’s seat of government in the Southwest, the Palace of the Governors chronicles the history of Santa Fe. This adobe structure, now the state’s history museum, was designated a Registered National Historic Landmark in 1960. What I loved the most here was the exhibit Treasures of Devotion by Larry Frank: An American Collector of Mexican Art. It by far captured my heart more than anything else in this museum. 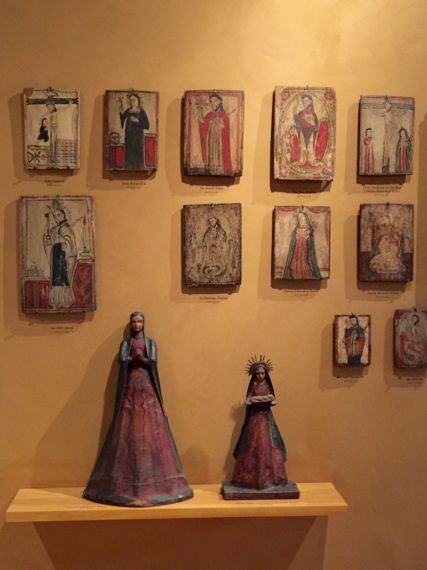 Mr. Frank spent four decades building his collection of New Mexican devotional art. Many of his Santos’ that are a part of the collection were purchased in the 1960’s and 1970’s before there was a great interest in their collection. He realized the artistic, cultural, and artistic value of these pieces. These Santos’ were bringing God into a very personal piece for the people that were struggling against the difficult days of those times to hold and to touch.

2. Visit the oldest Church in the USA: San Miguel Mission 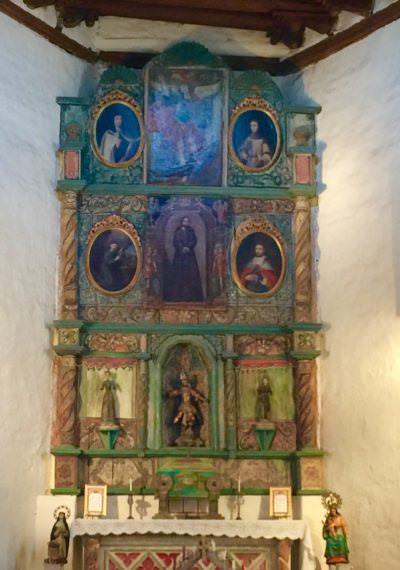 The San Miguel Mission was built in 1610 AD. by Spanish Missionaries and their servants on top of the existing foundation of Native American occupation of the site as early as 1300 AD. One of the most remarkable things about this church is its reredos, better known as an altar screen that dates to 1798. It is the oldest wooden alter screen in New Mexico. The top rectangular painting is of St. Michael flanked by St. Teresa and St. Gertrude. The center is a painting of Christ with St. Francis of Assisi and St. Louis. There is a carved wooden statue of St. Michael as well from 1709 that was brought from Mexico and occupies the center niche of the alter screen. This alter is stunningly beautiful and a DO NOT MISS while visiting Santa Fe! I also especially loved the tiny silver Milagros that were plastered on the San Jose Bell display in the back of the church. This bell once hung in the church’s bell tower. It was brought here from Mexico in 1712.

3. I fell in love with the Kakawa Chocolate House!

Kakawa Chocolates is a specialty chocolate company located in Santa Fe, New Mexico. Their passion is authentic and historic drinking of chocolate elixirs, something I had never heard of before. But let me tell you, they were delicious and I only wished I lived near a place that serves these elixirs so that I could have them more often! They are delicious. 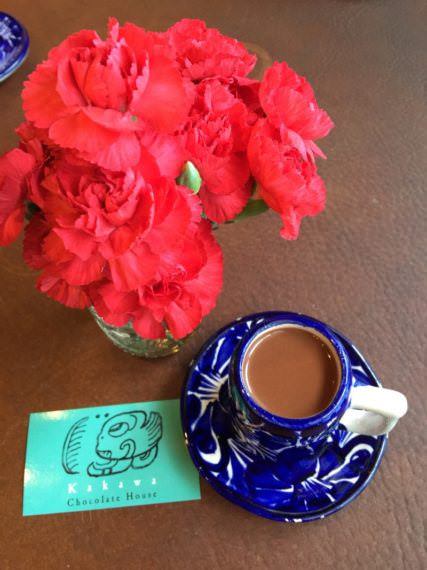 4. Next, Visit the Georgia O’Keeffe Museum

Georgia O’Keefe was an American artist that let her creative processes flow by being inspired by the landscape of Santa Fe. She was best known for her paintings of enlarged flowers and New Mexico landscapes. She has been recognized as the “Mother of American Modernism”, as many paintings of her “flowers” represented women’s genitalia, although O’Keefe consistently denied that intention (however, after visiting the museum, I don’t see how she can deny it!) She lived at her studio home in Abiquiu until the last years of her life. After her death, one of her paintings sold for $44,405, 000.00, which is more than three times the world auction record for any female artist. 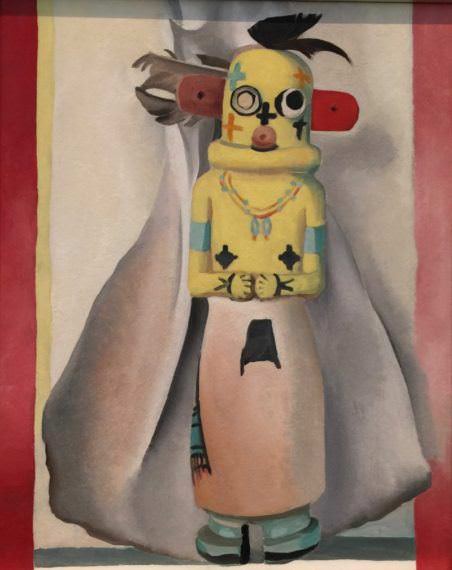 The museum itself is tucked in a space off the Santa Fe Plaza and visiting it feels more like entering her home than a museum, allowing for a more intimate experience of her work.

5. Next Visit the Loretto Chapel 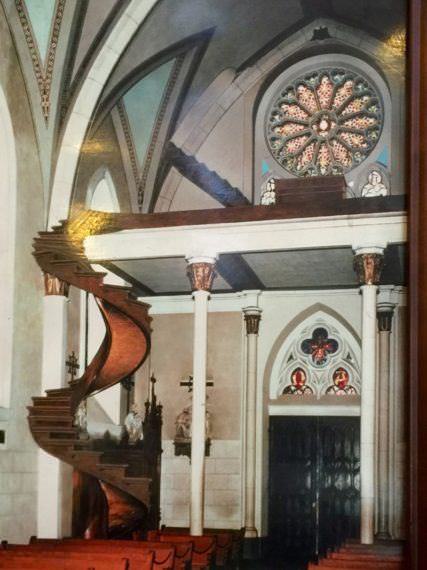 Loretto Chapel has been a Santa Fe Landmark for more than 100 years, the Loretto Chapel is best known for its legendary miraculous staircase! The story of the staircase comes along with a mysterious carpenter who appeared to build the staircase in the answer to the Sisters of Loretto’s prayers, and then he vanished without being paid when it was finally finished! The problem was that many carpenters had been called to build a staircase from the choir loft to the chapel. But all the other carpenters came up short and announced that because of the height of the choir loft, the building of a staircase would take up too much room in the chapel. But this mysterious carpenter answered their prayers. He arrived with only his tools on his donkey: a saw, a carpenter square, a hammer and tubs to soak the wood. He ended up building a 33-step circular staircase in two full 360-degree turns! It is quite spectacular.

The Chapel itself is fashioned after the Sainte-Chappelle in Paris and was built in the 1870’s to serve the sisters of Loretto. It is believed to be the first Gothic structure west of the Mississippi.

Visit Museum Hill, a beautiful part of town that has the Museum of Indian Arts & Culture, the Museum of International Folk Art, the Museum of Spanish Colonia Art, the Wheelwright Museum, and the Santa Fe Botanical Gardens. They have everything at Museum Hill! Museums, a delicious café, gardens, views, walking paths, hiking trails, a labyrinth, museum shops—they even have their very own plaza, the Milner Plaza. Here my two favorite stops were:

6. The Museum of Spanish Colonia Art 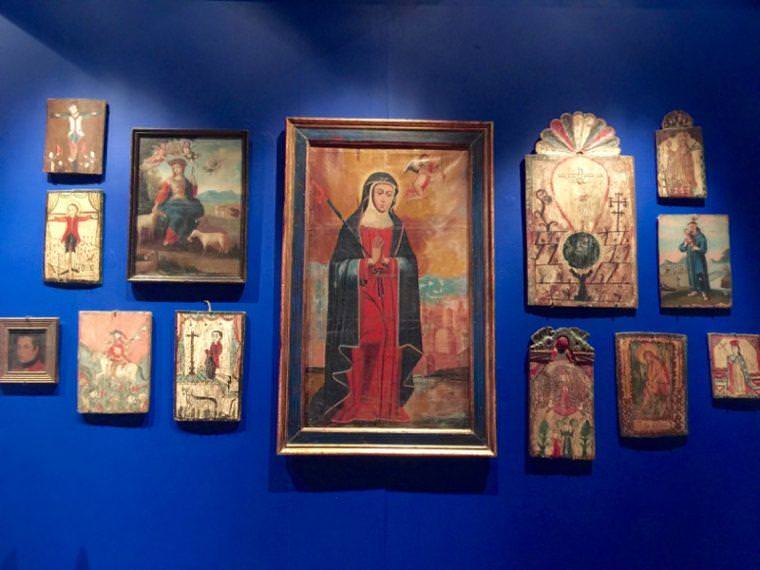 It was here where I was able to see a special exhibit that was going on that the time called the Blue on Blue: Indigo and Cobalt in New Spain. It was fantastic the way in which it was displayed! Entering the museum, you can peek through and see the deep blue of the objects and the walls of the display. According to the exhibit explanation: “Blue on Blue explores the use and importance of blue dyes and pigments in colonial life in New Mexico and New Spain. From images of the Virgin Mary to household blankets, ceramics and friar’s habits, blue was an integral part of the colonial world. The desire for blue-and-white ceramics led to nearly 300 years of production for the workshops of New Spain that joined cobalt blue with a mayólica glaze to imitate Chinese porcelains. Indigo was widely used by weavers and was the prominent color in most colonial Hispanic textiles, and was traded to the Navajo for use in their weavings. The pervasive popularity of blue over the centuries is reflected in a diverse array of stunning pieces.”

7. The Museum of International Folk Art 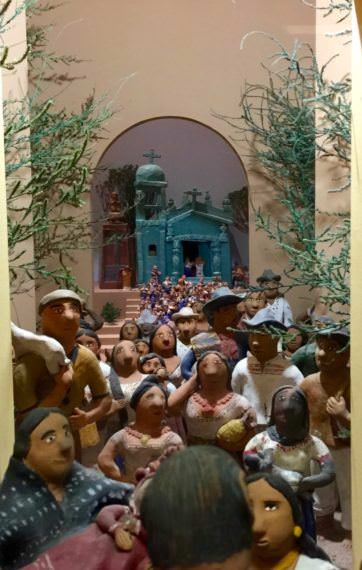 Last, but certainly not least, is the International Folk Art Museum The museum was founded in 1953 by Florence Bartlett, a wealthy Chicagoan who began visiting New Mexico in the 1920s. Her vision for the place was summed up by her statement “The art of the craftsman is a bond between the peoples of the world.”

As one of the few museums in the United States dedicated to folk art from around the world, the Museum of International Folk Art encourages dialogue about traditions, cultural identity, and community.

Where to Stay in Santa Fe, New Mexico, USA

This hotel offers a seasonal outdoor pool and rooms with refrigerators. The property has easy access to Highway 14 and is within a 10-minute drive of downtown Santa Fe, the state capital of New Mexico. 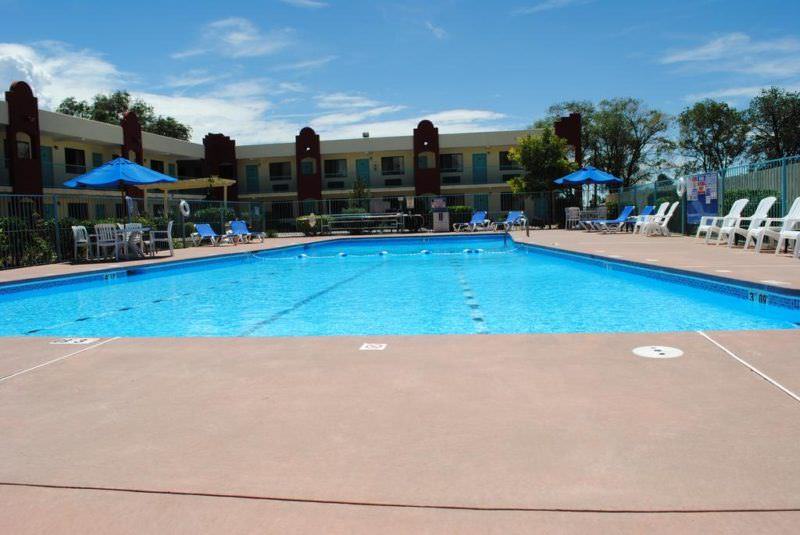 Guests are provided with a daily breakfast. The hotel has a dining area, garden and business center. A guest launderette is located on site.

The Comfort Suites hotel is near College of Santa Fe and the Museum of New Mexico. Guests in the mood for a swim will want to take a dip in the indoor heated pool and hot tub. 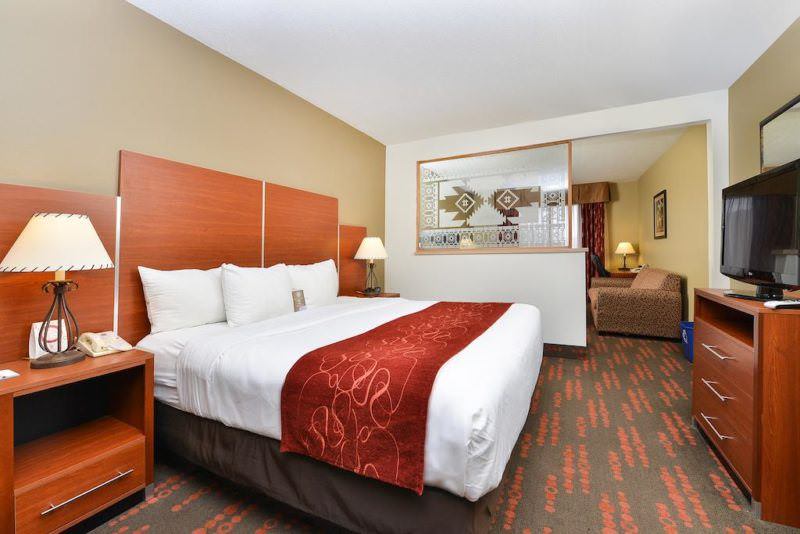 Your Morning Breakfast is full of hot and delicious options, making breakfast at the Comfort Suites the perfect way to start your day. Enjoy our free hot breakfast featuring eggs, meat, yogurt, fresh fruit, cereal and more, including your choice of hot waffle flavors. If you’re leaving early, a Your Suite Success Grab & Go bag is available for the two hours prior to breakfast.

Located in the heart of Santa Fe, this hotel is 5 minutes’ walk from the Canyon Road art galleries. St. Francis Cathedral Basilica is 7 minutes’ walk away. 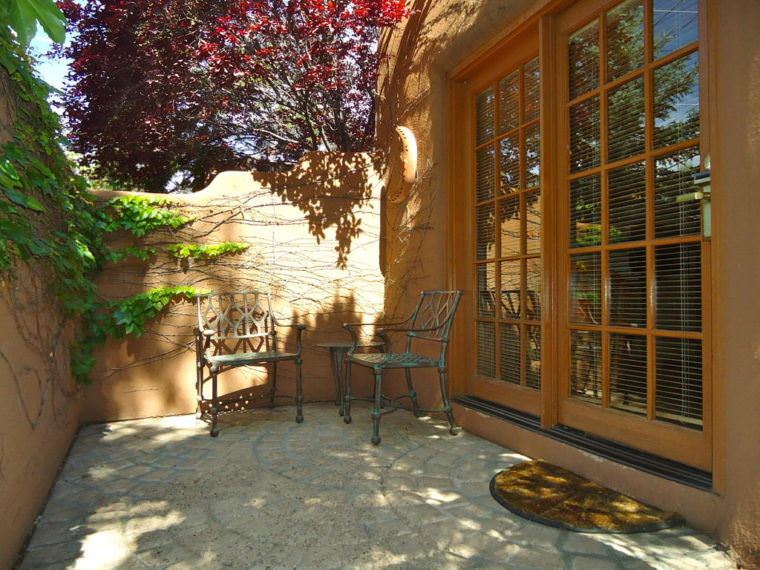 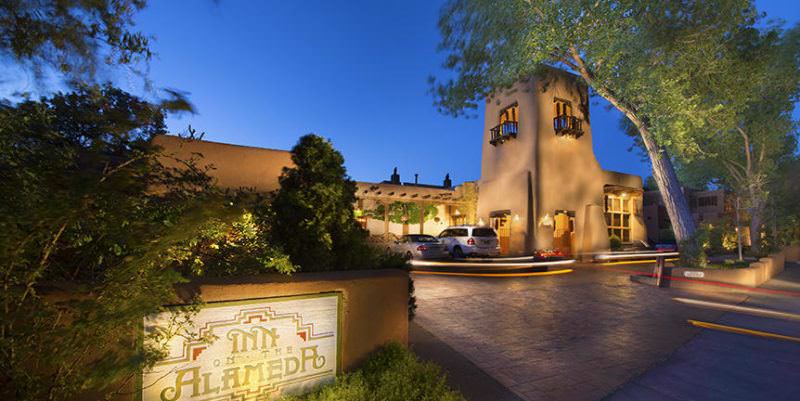 Guests of Inn on the Alameda can enjoy an organic continental breakfast of stuffed croissants, quiche, and fresh fruit. An evening wine-and-cheese hour offers the chance to relax and socialize. Following the wine-and-cheese hour, Agoyo Lounge serves light gourmet fare until 2200. 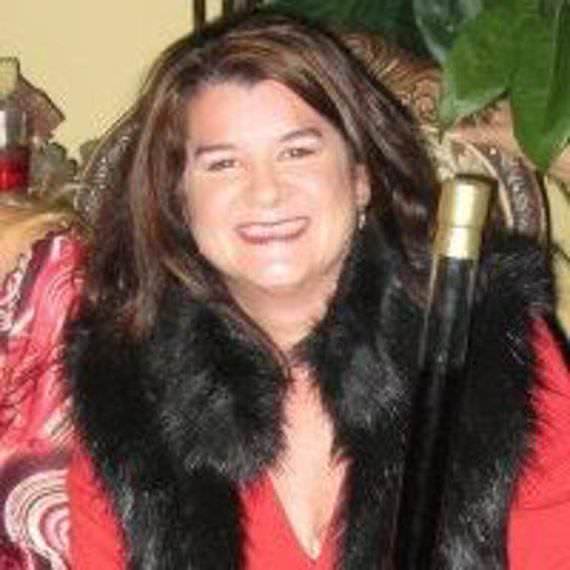 An experienced luxury travel writer, photographer, and social media influencer, Dr. Cacinda Maloney shares her love of travel with thousands of readers on her website PointsandTravel.com. A life-long learner, Dr. Maloney has been traveling every 6 weeks of her life for over 25 years as a lifestyle choice. She now travels even more than that, making it to 47 countries in 2016. She travels the world searching for soft adventure, culture, and smart luxury travel experiences.

One thought on “7 Awesome Things to Do in Santa Fe, New Mexico, USA @Pointsandtravel”

7 Awesome Things to Do in Athens, Greece @WhyGoGreece