Sikkim, a state in the North-eastern part of India is also known as the Switzerland of India. It is a state which has on offer nature at its very best, in the form of mountains, lakes, forests and waterfalls. Also, it is enveloped in a spiritual aura generated by numerous and ancient Buddhist monasteries which serenely dot the state. Sikkim is indeed the place for anyone seeking adventure, spiritualism or simply communion with nature. Though ideally, even a week may not be enough to take in all the sights and soak in the beauty of this place, due to constraints of time we opted for a fast two days and three nights trip to Sikkim. The places that we covered included Gangtok, Tsomgo Lake & Nathula.

Gangtok, which is the capital city of Sikkim and is situated in the eastern Himalayan range at an elevation of about 5,410 Feet.  Kanchenjunga, which at an altitude of 28,169 Ft. is the third largest peak in the world is visible from Gangtok. Gangtok is home to numerous Buddhist temples and monasteries.

Nathula is a mountain pass in the Himalayas and situated on the Indo-China border, it is situated about 54 kilometer’s from Gangtok City and is at an elevation of 14,140 Ft. The drive to Nathula is in itself a thrilling experience as you ascend to a height where oxygen becomes rarer and rarer and you view some spectacular lakes and come across some stunning views.

Foreign Nationals would require an Indian visa to visit India.

In addition to visiting Sikkim, which is a restricted area due to its nearness to neighbouring countries like China, foreign nationals are required to obtain a special restricted area permit also known as Inner Line Permit(ILP).

If you are a national of Pakistan, China, Myanmar or Bangladesh, then it gets a little more complicated to enter Sikkim. You must get written approval from the Ministry of Home Affairs, Government of India, New Delhi before the Restricted Area Permit can be issued. Best to leave the formalities to be handled by your tour operator.

Travel Tips/ Things to Bring during your trip:

Carry warm clothes and comfortable hiking shoes. This is a hilly area and you would need to have comfortable shoes to walk. 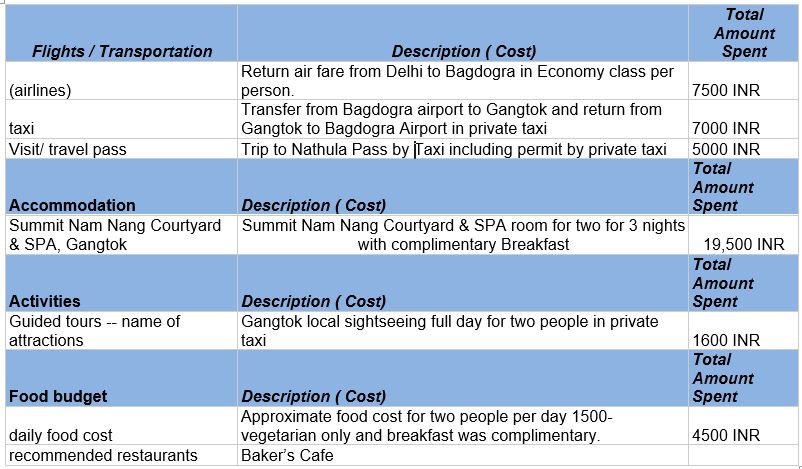 We arrived in Gangtok after a five-hour drive from Bagdogra, which is the nearest airport. Though the distance is just about 124 kilometer’s, because of the mountainous terrain and winding roads, the trip takes anything from 4.5 to 5 hours. We had taken a private taxi from the airport and enjoyed the drive as we passed flowing rivers and lush greenery on the way. As the drive had left us a wee bit tired, we rested in the hotel till evening and then went along for a stroll on M.G.Road. This is a clean open-air mall which is traffic and plastic free. It is a hotspot for tourists and locals and a place to hang out. It has a wide array of eateries, pubs and shops selling everything from shoes to jackets to other knick-knacks. One can either shop or just take a stroll or relax on one of the benches and watch the world go by.

Tip- Do visit the Baker’s Café on M.G.Road and try their Cinnamon Coffee and Almond Muffins

The day started with a visit to Hanuman Tok, which is Hindu temple dedicated to the popular Monkey God known as Hanuman. It is a beautiful temple atop a hill and immaculately maintained by the Black Cat Commandos of the Indian Army. The place is very picturesque and provides some excellent photo opportunities. The view from atop here is breathtaking and one can have an excellent view of the Himalayas from here.

This is a relatively new monastery built across a huge expanse of land, its sheer size and peaceful ambience will bowl you over. It takes about an hour to reach this place by car from Gangtok as the road is not all that good and is quite bumpy, but once you arrive, you realize that it is worth all the effort.

We rotated the prayer wheels which are a standard feature in all Buddhist monasteries and spent some time meditating on the stunning Buddha statue inside and spent some time strolling on the Monastery’s campus soaking in the peace and calm that seemed to envelop this place in a warm cocoon. There is a restaurant as well as a souvenir shop in the monastery. Visitors have free access to almost all parts of the monastery and one can even take photos with the young monks.

Tip- The view from the terrace is spectacular and if you are there in the evening you can see a spectacular sunset.

This is a natural waterfall which is situated within a park that has been themed based on Shaman culture. It is a perfect place to chill out and breathe some mountain air and revel in the natural beauty all around with some spectacular views. The waterfalls themselves are not spectacular but worth visiting.

Tip There is an admission fee of INR 20 per person for this attraction.

This is a Buddhist Stupa, which is situated within the city and reached through a steep slope. Another example of Buddhist calm and serenity, the Stupa is surrounded by prayer wheels and there are thousands of earthen lamps burning for eternal peace. One can opt to light a lamp of their own by paying a fee of INR 100.

Tip: Look out for a small boy on the way up to the Stupa, who plays some sweet and heart-wrenching music.

This is a museum dedicated to Tibetan culture and Vajrayana branch of Buddhism. It boasts an esoteric collection of ancient Buddhist manuscripts, cloth paintings and other ancient artefacts used by the Buddhist monks. The museum is housed in a fascinating building typical of Tibetan architecture. The place is especially of interest to people interested in ancient Buddhist history and culture. There’re souvenir and book shops within the museum where one can find jewelry, books and other mementoes.

Tip: The museum is closed on Sundays, public holidays and Second Saturdays of every month, there is an admission fee of INR 10 for this attraction.

We left Gangtok early around 8 AM as it is advisable to do so. The road is a winding, mountainous road across some rugged territory. We left in our hired vehicle and were soon looking out at the ever-changing landscape which was stunning. We stopped for some hot tea and noodles on the way and were soon at our first attraction.

The lake is situated at an altitude of 12,310 Ft. and is fed by the melting snow from the mountains. The lake remains frozen in winter. It presented a beautiful sight and had a lovely and serene beauty to it. It was nearing winter and the light was not good because of which we could not view the lake in all its beauty but still, its pristine beauty was overwhelming. It was here that also had our first encounter with the Himalayan Yak. These were the tamed ones on which one could take a ride around the lake for a charge. We, of course, skipped this and just took a photograph or two.

Tip: One should reach Tsomgo lake before noon as after that the weather usually turns bad, In winter you may not be able to visit if it is snowing heavily.

It was a great feeling to draw cash at the highest ATM in the world which is situated at an altitude of about 13,200 Ft., in a small town called Thegu.

Tip: Only Indian citizens are permitted to travel beyond Tsomgo Lake.

This is a small town at an altitude of 13,600 Ft., it is a border trading post for India and China, and we could see many Chinese vehicles parked outside the trading post. The town has an internet café which probably is the highest in the world.

This is a unique temple situated at an altitude of 14,000 Ft. The temple is not dedicated to any of the Hindu Gods or Goddesses but is a memorial to an Indian soldier who laid down his life while serving his country at this high altitude. The bunker where he used to do duty for the Indian Army has been converted into a temple and museum which houses his uniform and other articles he used. As per local legend, his spirit still roams the mountains and warns the Indian troops of Chinese troop movements in the region. The views from this place are stunning; you can literally touch the clouds and you will feel as though you have reached the end of the world.

Tip-Because of the high altitude, one may experience difficulty in breathing because of the low oxygen levels.

This is a pass which was part of the ancient silk route; it connects India to China and it is at an altitude of 14,140Ft. It is an Indian military fortified area and of bounds for all foreign nationals. The place affords some stunning views of snow-capped mountains and white clouds floating around on the immediate horizon. It is a perfect place to marvel at the stunning and wild beauty of nature.

Tip-Nathula is open to visitors only from Wednesday to Sunday of the week and the best time to visit is from May to October. 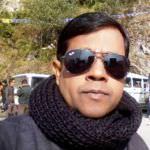 Vyjay is a Management professional who is passionate about travelling and writing. Together with his partner Sandy, he travels the world. They love exploring world cultures, seas, mountains, nature, food, art, history and urban places. They set up ‘Voyager’ blog as a place to share their stories and experiences of incredible travel journeys and aim to inspire other travel lovers to see what this amazing world has to offer through their stories, videos and photos.

9 thoughts on “DIY Travel Guide to Gangtok, Sikkim in India”

How to See the Best of California in Only 7 Days