What is the best part about the Asian heat? Downing a good beer to combat it, of course! And for research, we tried the beers listed here at least once (or maybe seven times?) while in South East Asia.

You may call it alcoholism, but we prefer “acquiring useful cultural knowledge” by learning the history of these pilsners. And we had to stay hydrated somehow! So, get ready to chug because here’s a rundown of the best thirst quenchers we found while enjoying the heat and humidity in our travels.

One of the most popular drinks in Cambodia, Angkor was named after & boasts of an image of Angkor Wat on its bottle. It is affordable, serving right its slogan “My Country, My Beer.” A pale lager & found where “all beers are sold,” Angkor beer finds cheers who ever gives it a taste.

Coming in second is Klang beer themed after the “Terrace of Elephants” in Angkor Thom, part of Angkor Wat. Klang has a nice bite to it, and it has a stronger taste than Angkor. It’s not the most pleasant tasting beer, but hey, it does the trick! We found this beer more popular on the Cambodian Islands, like Koh Rong, which is awesome to drink with the heat and humidity. There was nothing better than drinking a nice cold beer with a great ocean view! Klang is a strong pale lager.  They, too, have a beer slogan which is “Strong beer, but take the challenge!”, so we took the challenge!

Oh, Bintang. The beer that is the most recognizable due to so many tourists buying the most frowned upon souvenir Bintang shirt. What a marketing strategy though, hey? Although Indonesia is an Islamic country, Bintang seems to dominate both in beers and branded tourist tanks. It is manufactured by Heineken, making them similar in taste. This light pilsner beer is best served chilled and found in all bars, hotels, grocery stores in both bottles and on tap. Bintang beer goes well with a tasty Nasi Goreng.

Beer Lao is hugely popular with the expats in Laos, and probably the most popular beer in Southeast Asia. Found nearly anywhere, a Beer Lao is always a g whether you are tubing or strolling down the Mekong River. This lager comes in huge 640 ml bottles, so talk about drinking efficiency! It is light and crisp & low in carbonation. The developers have partnered with the Danish Brewery, Carlsberg beer, so not bad for a developing country.

Tiger is Singapore’s first locally brewed beer and found throughout Southeast Asia. It is a pale lager that tastes similar to Heineken (since the same owners brew it). Tiger is one of the best Southeast Asia beers: strong in flavor, dry, hoppy and bubbly, and goes well on any day! It works well with a nice spicy meal. Their slogan is “It’s time for a Tiger,” so why not?

This is the most popular and most-loved beer in all of the Philippines, consumed by more than 80% of the population. It comes in regular, bold and light varieties, differing in alcohol content. San Miguel is a pale pilsner, slightly bitter and malty; yet San Miguel has made it into the drunken hearts of travelers in the Philippines. It is best downed with delicious and crunchy Filipino food like lechon. To better enjoy the warm climate of the Philippines, try a San Miguel, a hundred-year-old tradition, available everywhere in the bottle and on tap!

Another popular beer in the Philippines that can be likened to be San Miguel’s cousin. It says it is best served iced cold, like most beers, and exceeds the robustness of most beers. It’s a perfect drink at the beach, a little sweet and malty and round. Also, they are surprisingly strong in alcohol content! Red Horse beer seems to be more common and available in the Philippines. It has evolved as a social drink especially for the young ones, so it works if you are out to meet people!

Chang, a pale lager, means “Elephant” in Thai. Chang is one of the best beers because it is unregulated in alcohol content. Good and bad thing: you can have two Changs ($2 each) and be on your way for a great night; or seven bottles of it and feel bloated, groggy and the least bit drunk. But those “Changeovers” have been some of the worst we have experienced, but nothing coconut water can’t fix! Chang tastes quite sweet and malty but with so much humidity and the big beach parties, Chang was usually our go-to beer in Thailand.

Did you know Vietnam is one of the biggest beer drinking countries in the world? Bia Hoi beer is mostly seen in the northern region of Vietnam and mainly in Hoi An, on tap. It is also a beer that has no preservatives! There is something extraordinary about the plastic chairs, street food, and a cheap cold beer on the side of the Vietnamese streets. We were paying $0.25 (can go up to $0.40 in some places) per glass in some places, and still, there, was cheaper to be found! Bia Hoi was easy to drink, an excellent way to meet new people, accompany your delicious Vietnamese dinner, and perfect for the hot, humid day! The crazy thing is that water is more expensive than the beer, so how else do you stay hydrated? More Bia Hoi!

This beer is mostly found in the South of Vietnam, mainly in Ho Chi Minh (aka Saigon). The Vietnamese usually like to serve their beer with ice to make it especially chilled when drinking, so when we had Bia Saigon, it came in a big glass chilled on the rocks. The only problem with the ice is that with the heat and humidity, it melts fast, making your beer watery. It’s a nice beer, but carbonation and flavor lay a bit flat (I think mostly because of the quick-to-melt ice). Costs about $0.50 per bottle, but mind you, they are big and taste excellent with a Bahn Mi! 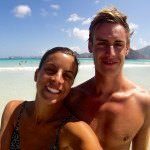 We are Jack and Jenn from Who Needs Maps. We are a long distance couple, from America and Australia; so why not meet in the middle and use travel as an excuse? We are thrill seekers, food lovers, world travelers, adventure finders, misadventure attracters, and a fun loving couple who just wants to explore the world together; this & this are our proof. We hope to inspire, inform and entertain people through our experiences and stories! Embrace the fun, enjoy the craziness, and let’s take on the world together! Happy travels!