South and Central America have both been on our travelling bucket lists for a long time.

When the opportunity came up to take the time off from work both Craig and Amrita jumped at the chance to go spend some time in the beautiful country of Costa Rica to unwind from life at home in Vancouver, Canada, and have an adventure!

Check out some of the cool and cheap tours you could do in Vancouver.

After landing in San Jose we made our way to La Fortuna on the start of our three week trip down Pacific Costa Rica.

The Arenal Volcano plays a huge part of tourism and agriculture in the area. We also had the best and biggest avocados we’ve ever eaten, here.

Check out some of the cool and cheap tours you could do in La Fortuna.

This man was selling Mangoes from the back of his truck in the town center. 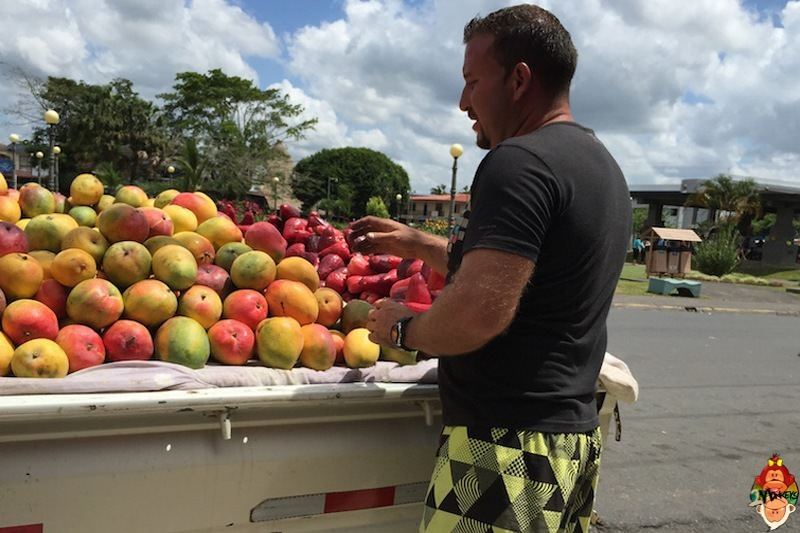 The Arenal Park has a variety of interesting wildlife. Here an Eyelash Viper has just swallowed a small Lizard. The tail of the Lizard is still hanging out of the Snake’s mouth. 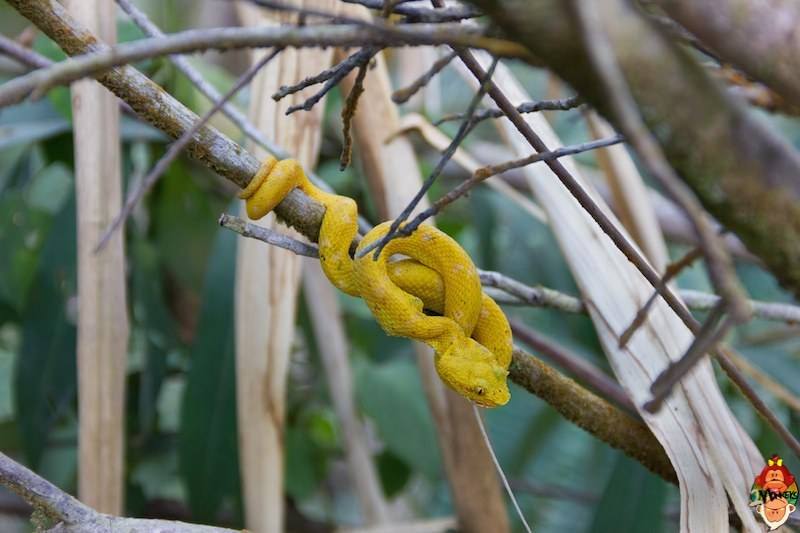 The view of the Arenal Lake can be seen from this lookout with spectacular sunsets. 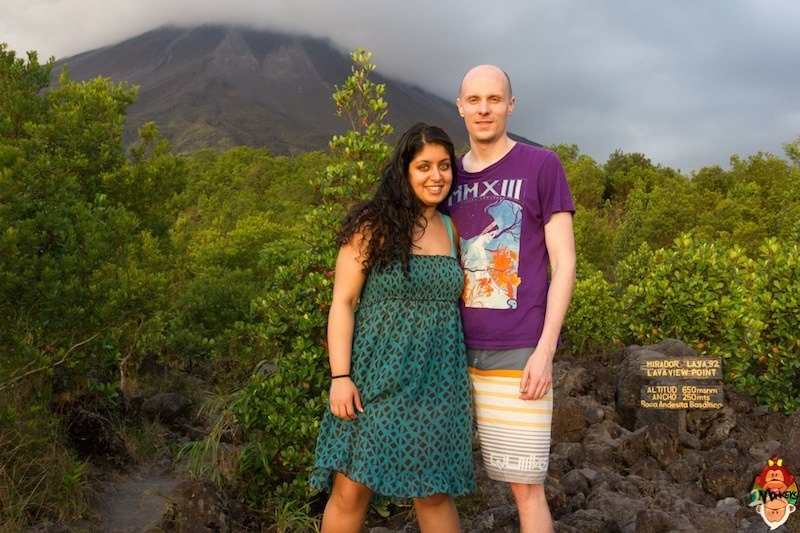 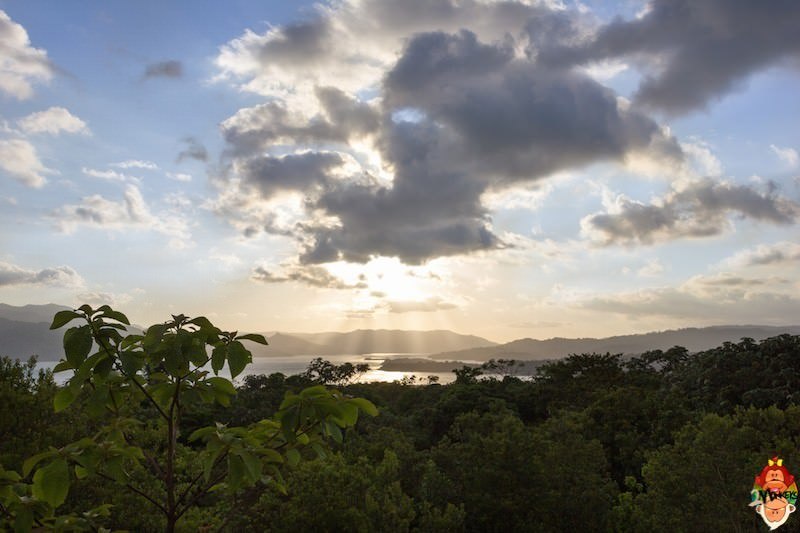 The guide on our river trip outside of La Fortuna knew a lot about the different birds we saw. 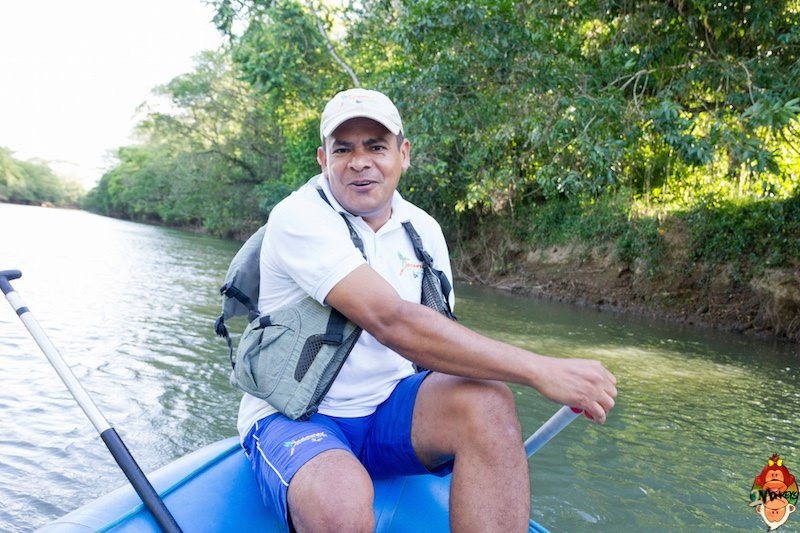 It was much easier to take pictures of the Lizards relaxing in the sun versus the birds that flew away from the raft while we floated down the river. 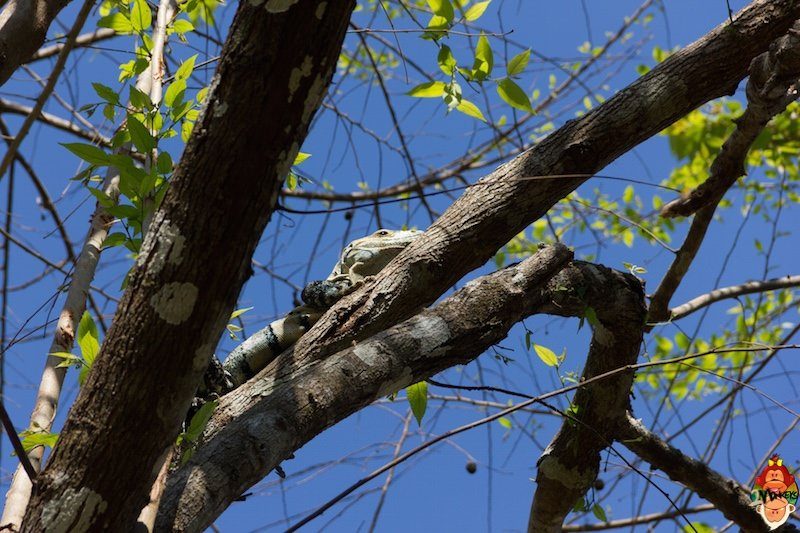 Our next stop was the sleepy surfer town of Montezuma, which was a 4 hour bus ride from La Fortuna. We spent our days playing in the sea and watching beautiful sunsets. 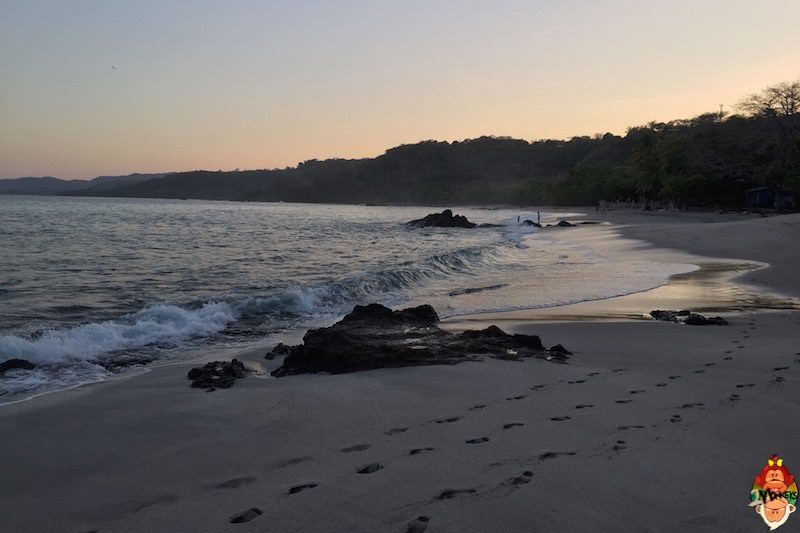 On Thursday nights fire performers and drummers come out in the town center and put on a show for everyone. 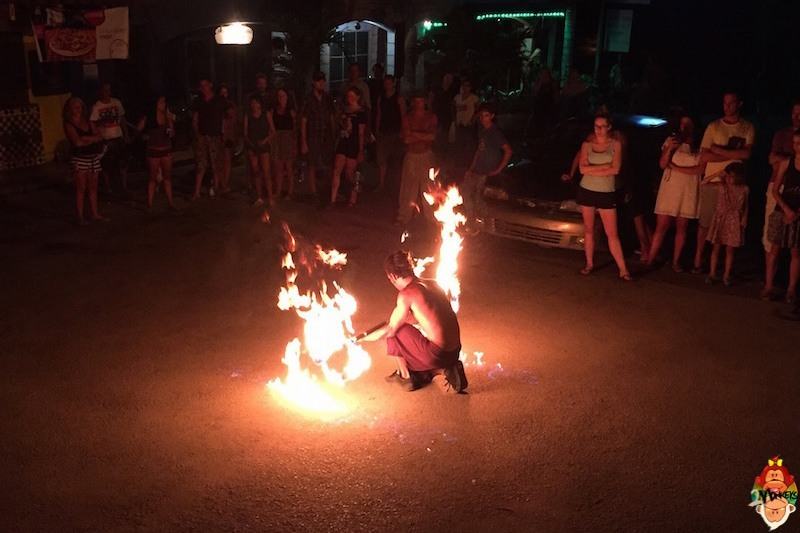 After a few very relaxing days we took the 1hr water taxi from Montezuma to Jacò and continued to Manuel Antonio to meet Kach and Jon. They took us down a windy path to a secret beach to watch the sunset. Kach caught a tiny crab that Jon took a picture just before the sun set. 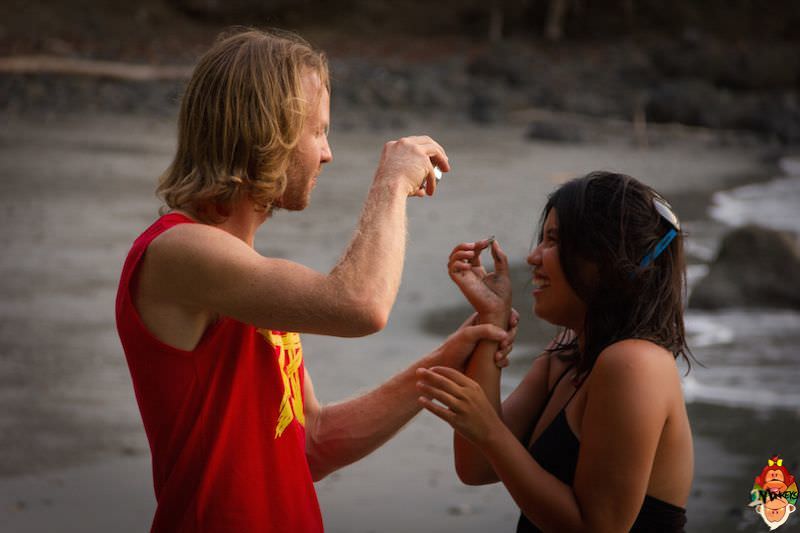 At the same time, another guest from the hostel had covered herself in wet sand to exfoliate in the warm sea. 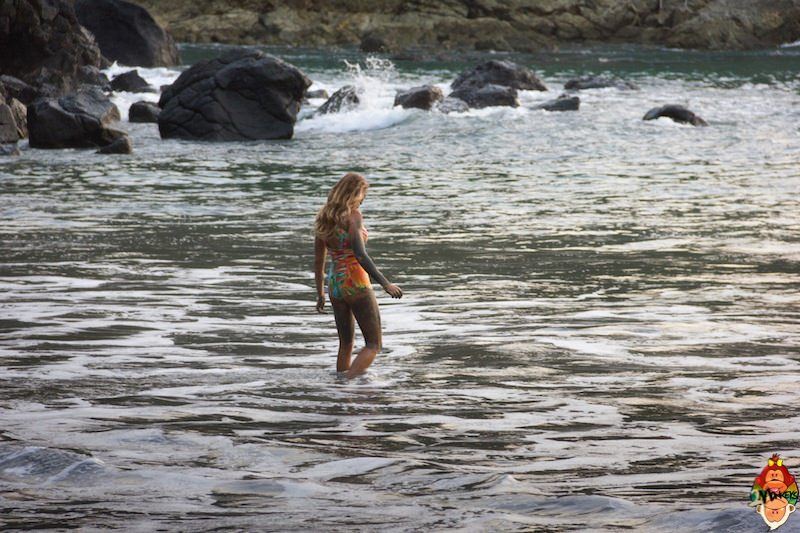 It’s hard to get sick of the sunsets in Costa Rica. 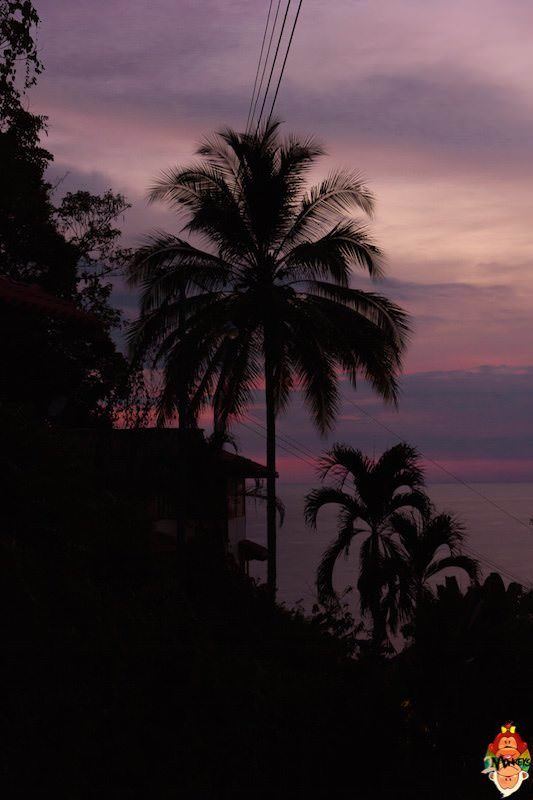 We visited Manuel Antonio National Park in the early morning while it was still cool. The animals would hide from the midday heat. There were lots of Squirrel Monkeys that were as curious about us as we were them. This allowed for us to get up close.

Just as we were at the end, we were rewarded with seeing a Sloth asleep up high in the trees. 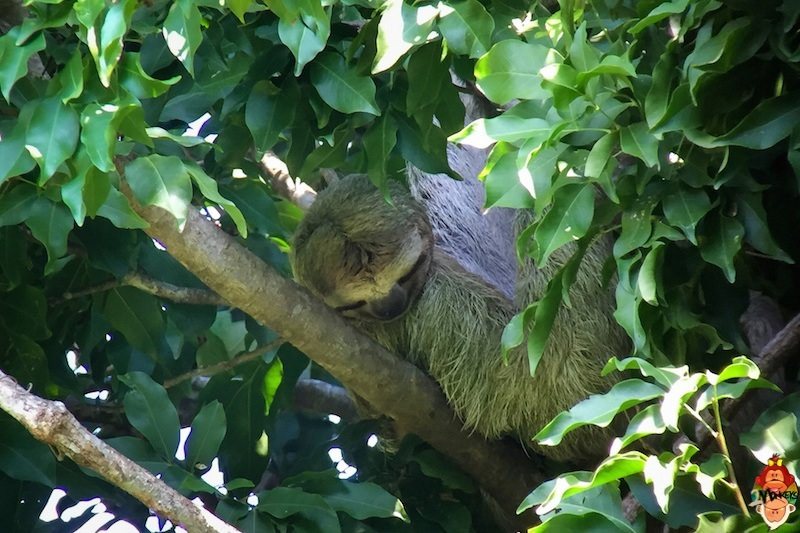 We couldn’t get enough of the beautiful sunsets. We were fortunate enough to have this view from the balcony outside our room. 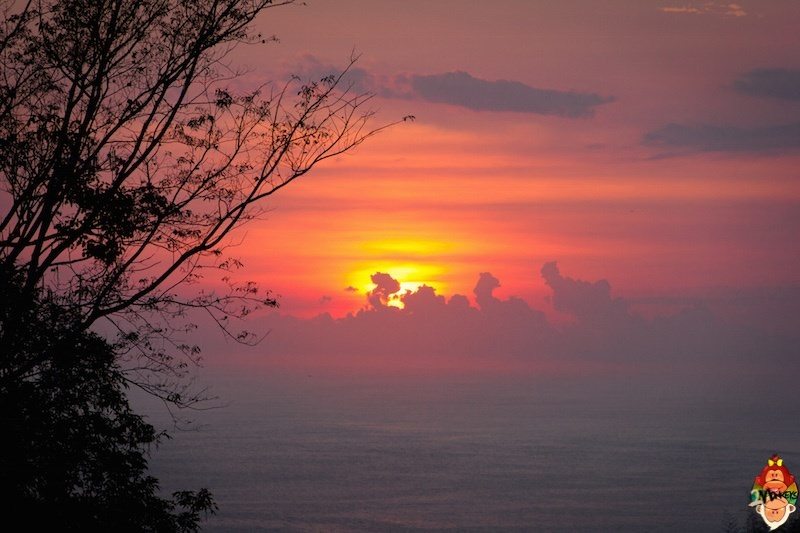 The same evening a sloth came by our hostel walking/hanging from the power lines, a rare and lucky sight for all the guests. 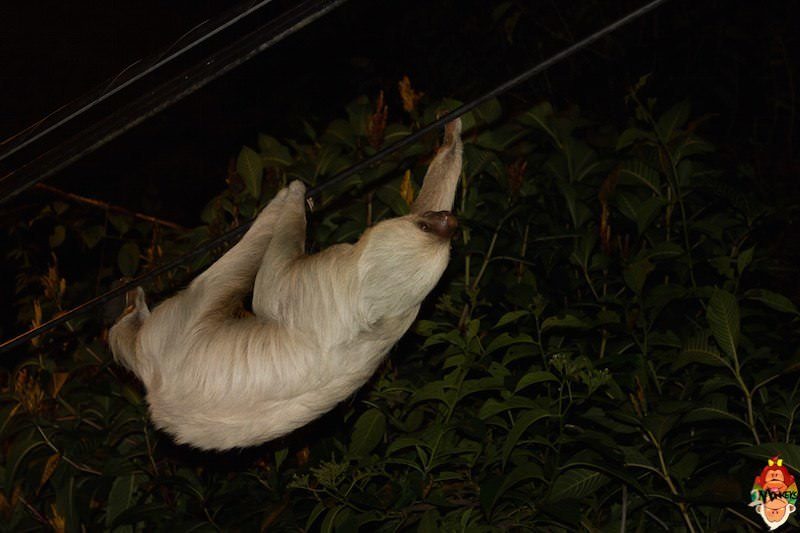 We decided to move further south towards the Osa Peninsula. On our way we stopped in Uvita where we luckily checked in to our hostel in time to avoid being caught in a six-hour downpour. 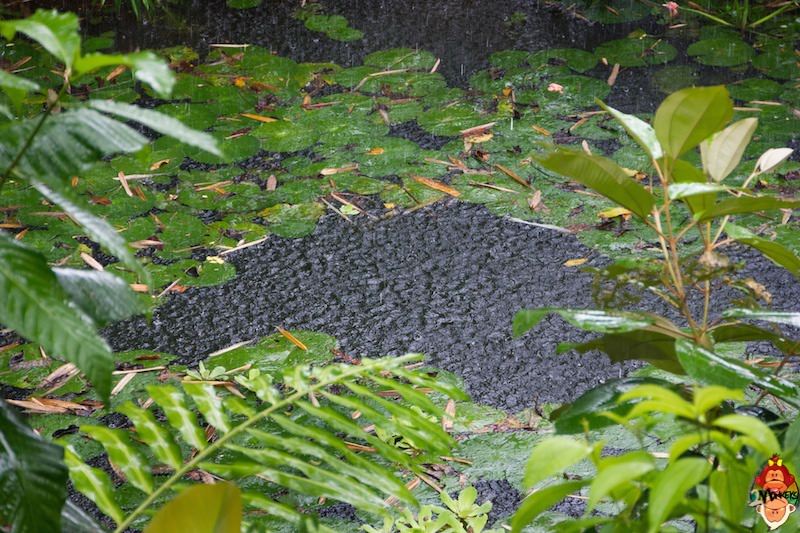 There were several downpours during our stay in Uvita. Despite being from Vancouver we were shocked by how much rain there was helping us learn how the Rainforest became it’s namesake. 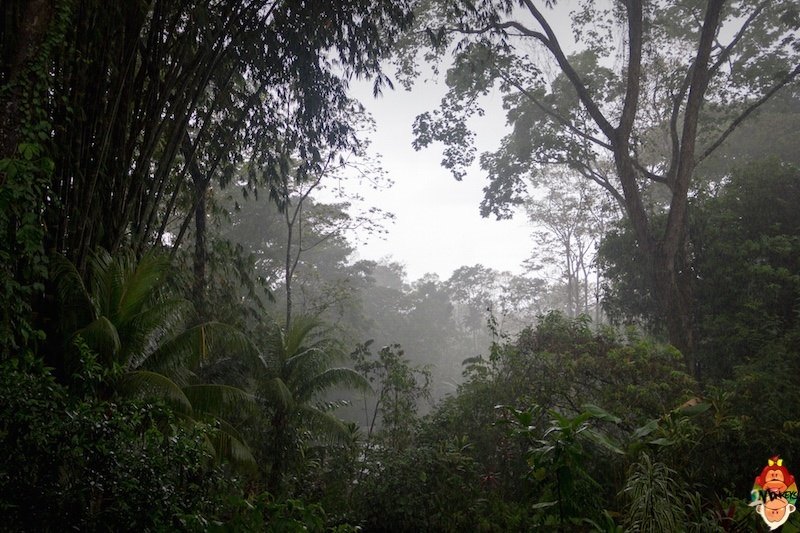 Craig decided to wake up really early to hike up a steep trail to try and catch the famous Whale’s Tail beach before the tide engulfed it. Later that day we practiced Yoga, and relaxed at the waterfall close to the hostel. 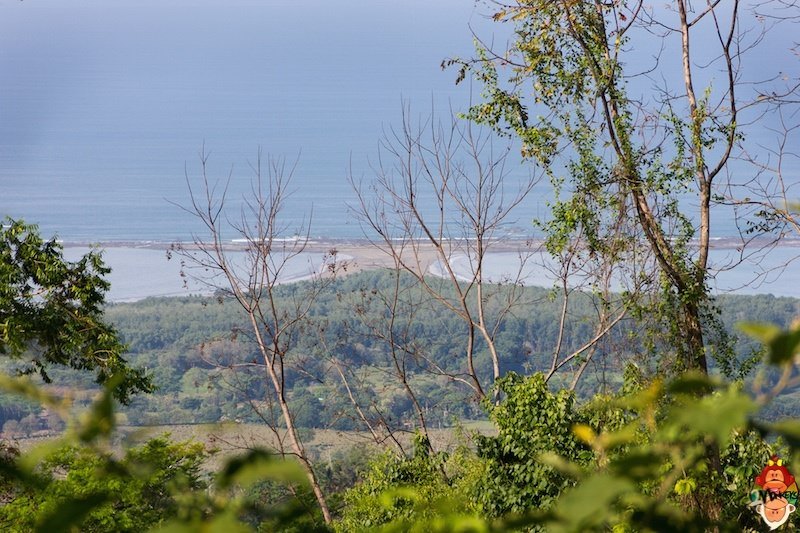 Once more the wildlife finds it’s way into the hostel. Noisy frogs could be heard throughout the night. Some were closer than others. 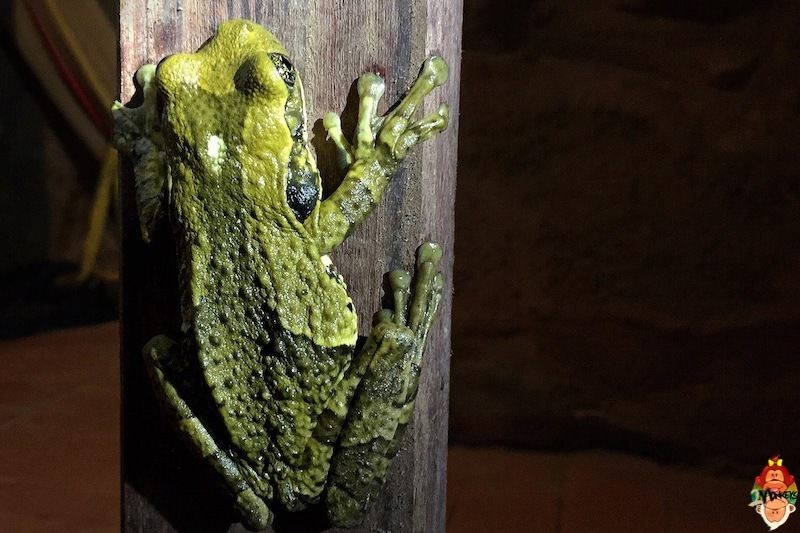 After travelling from Uvita to Sierpe, we got a boat down the river and out towards the sea until we landed at Drake Bay. Scarlet Macaws can be heard squawking around the area throughout the day.

Check out some of the cool and cheap tours you could do in Corcovado. 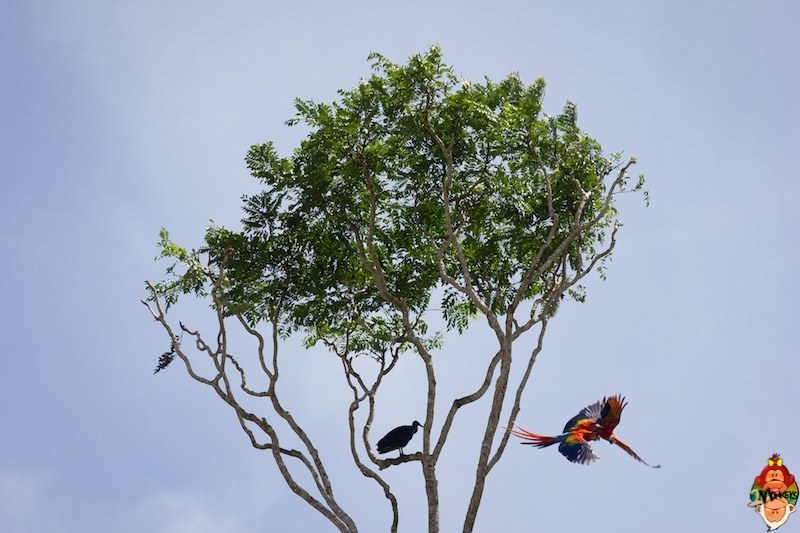 The Corcovado Park is only accessible via a 1hr boat ride and contains some of the most dense jungle and wildlife in Costa Rica. Our guide took us from the beach into the depths of the rainforest to explore on unbeaten paths. We also went Snorkelling into the area and saw beautiful marine wildlife, but alas, we have no waterproof camera. 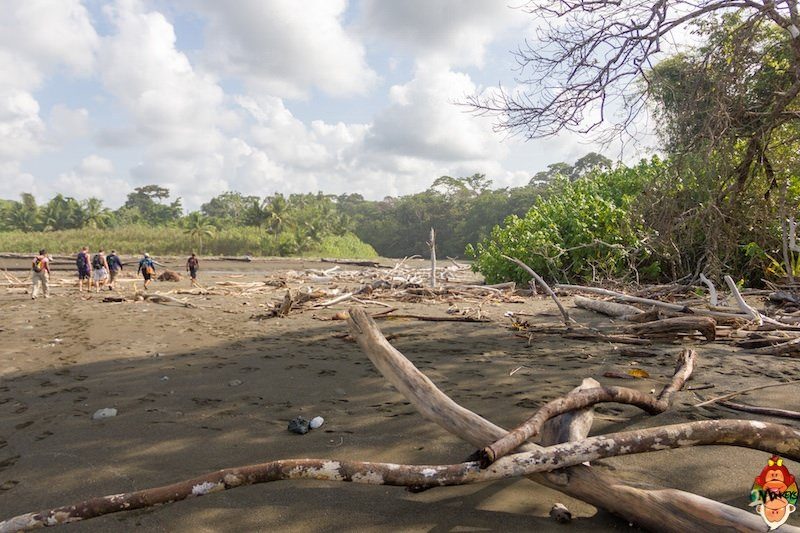 Our guide went ahead into the muddy dense bushes, he came back to bring our group to where he found a Tapir sleeping. 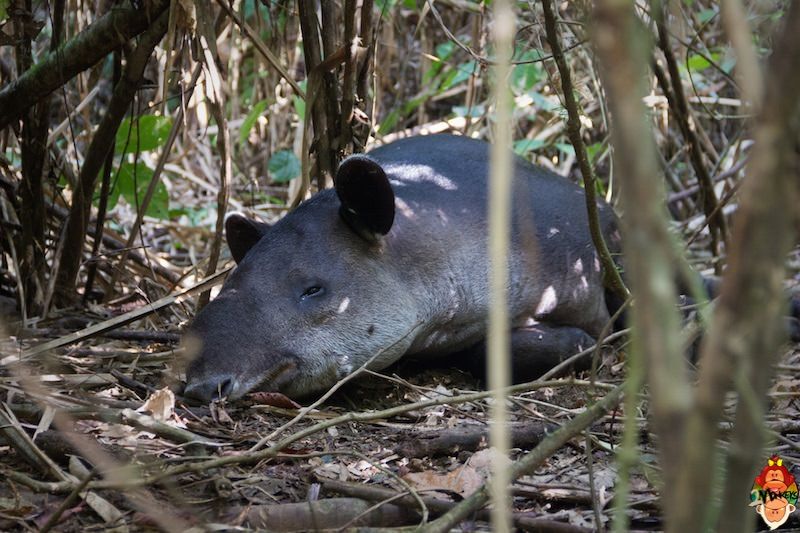 We spotted more creatures above us; this time there were Spider Monkeys. 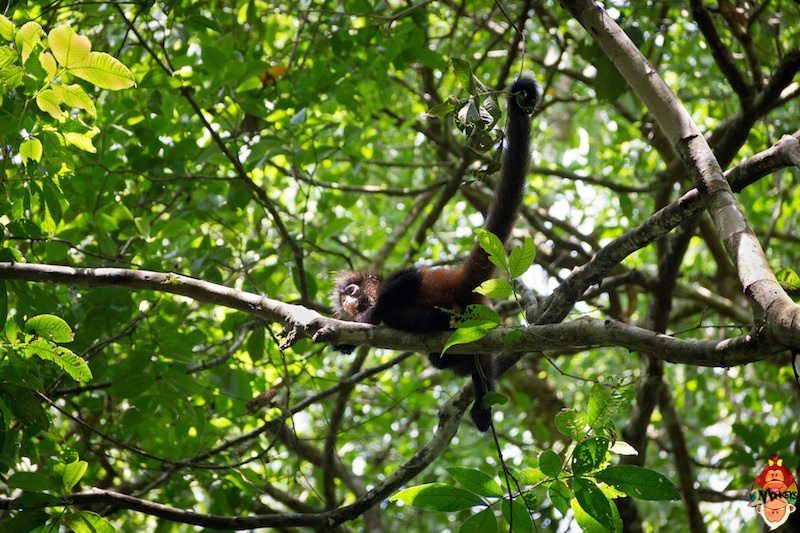 Our guide caught a lizard and hung it from the ear of people in the group. 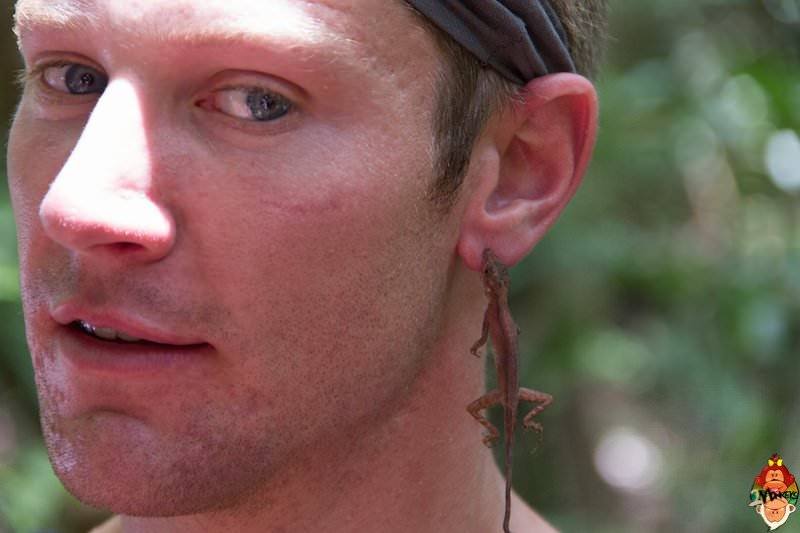 Some of the wildlife does not seem to care about blending into their surroundings. 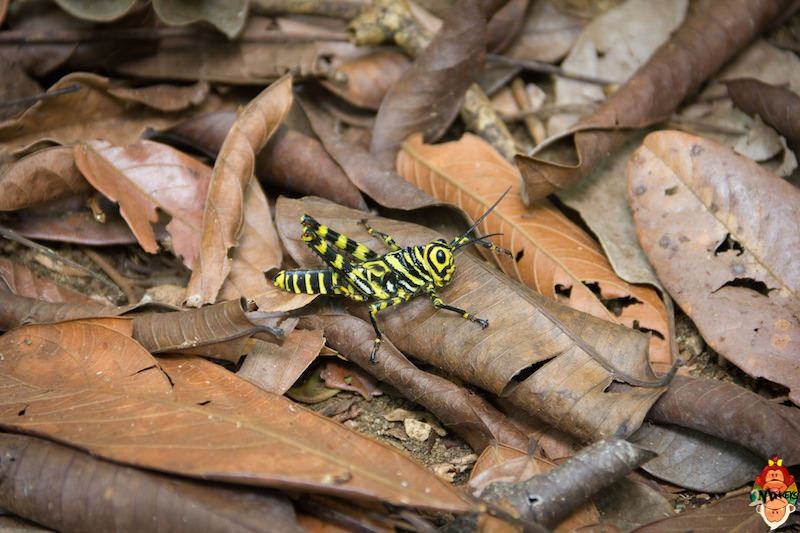 Others are much more cautious with their appearance. Somehow our guide managed to find this owl discreetly hidden in the branches up high. 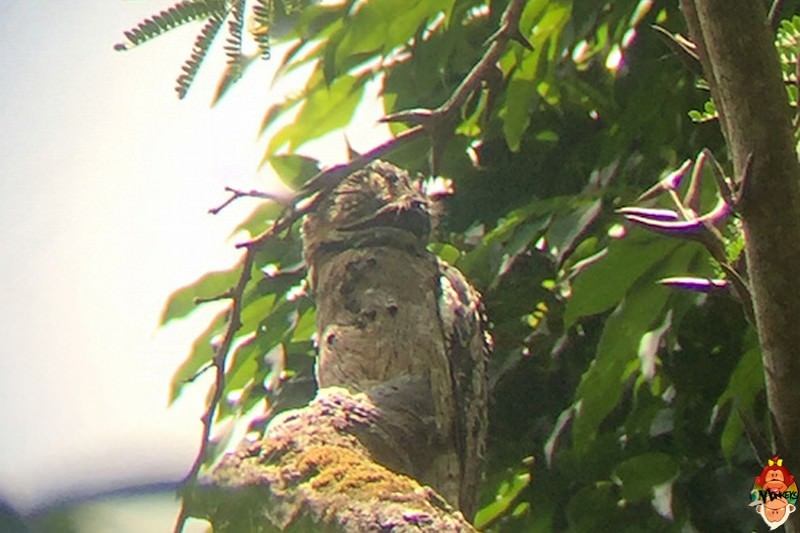 One last sunset before we were to head back to San Jose and ultimately Vancouver. 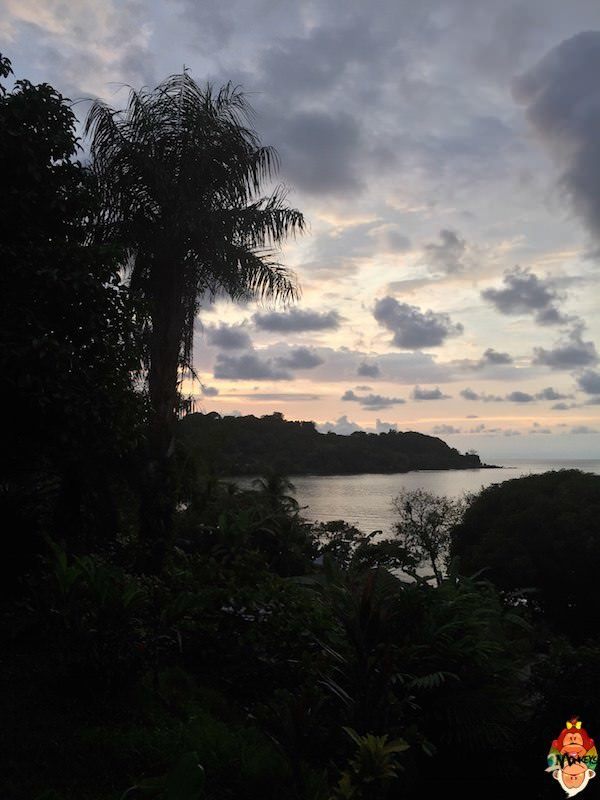 Neither of us had flown in a plane this small. This single engine Cessna took us to San Jose in 45mins from Drake bay. 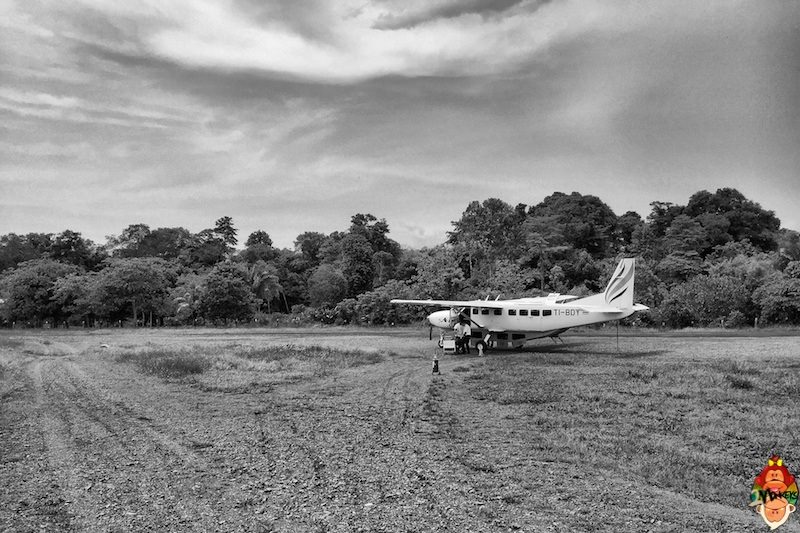 We were lucky to see the Whales Tail beach one more time from the plane. We also flew alongside a storm and saw lightning strike over the land. 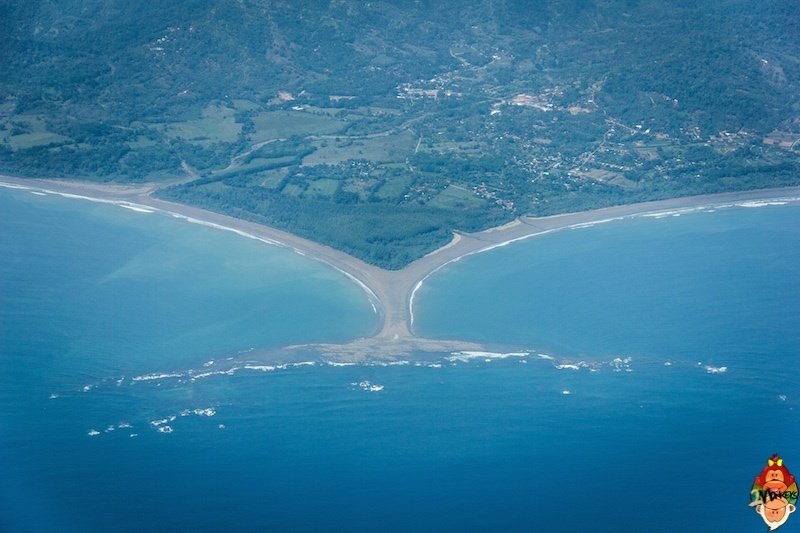 And that brings a conclusion to our amazing 3 Weeks Exploring the Pacific side of Costa Rica. Thanks for reading!

Are you planning your awesome trip soon? Let us help you!

Check out the different travel services that we offer!

7 Tips For Staying Healthy On The Road