Home » Travel Blog » The Best Things to do in Dhaka, Bangladesh and Our 2 Day Tour Itinerary with Deshghuri Tours

Bangladesh is one of the wettest and therefore greenest cities in the south Asia region and that extends to the capital city, where the best things to do in Dhaka are all around you! Despite being incredibly built up and heavily populated, the river is central to daily life here and plays a key role in every element of existence. 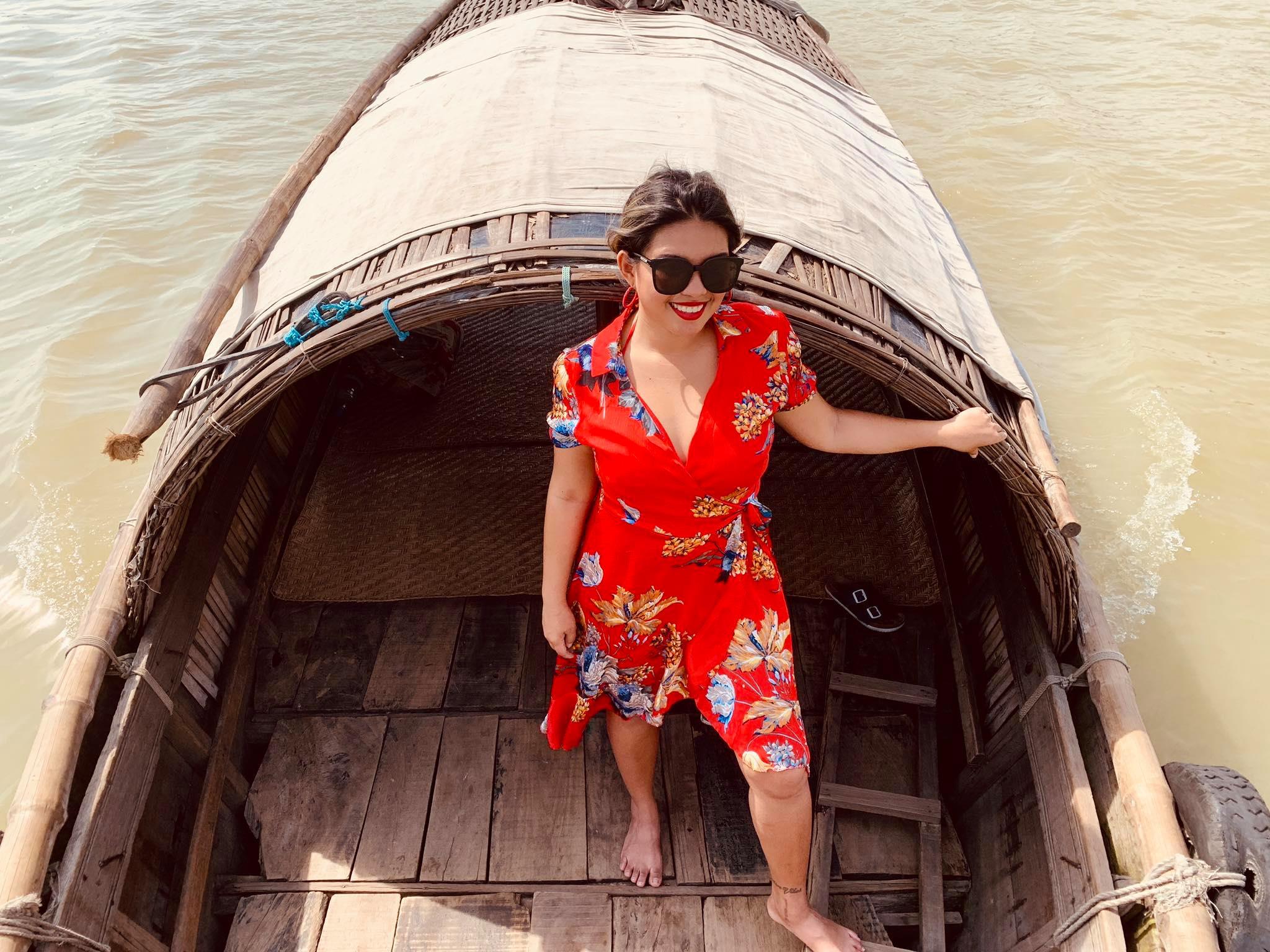 A vibrant and eclectic city, you will still find ancient tradition thriving alongside modern industry and technology. Be prepared to adapt to a new way of life during your time in Dhaka, where everything seems to happen at breakneck speed, yet nothing happens very quickly at all! People in Dhaka are extremely warm, welcoming and humble although many are very shy when it comes to speaking English, despite being able to speak it quite well.

Here are ten of the best things to do in Dhaka, Bangladesh!

1. Ride in a rickshaw

These pedal-powered people movers snake their way through the narrow inner streets of Dhaka all day and night. In some places, they are the only effective mode of transport to pierce through the gridlocked traffic, whilst also being an exhilarating experience for newcomers to this hectic city. 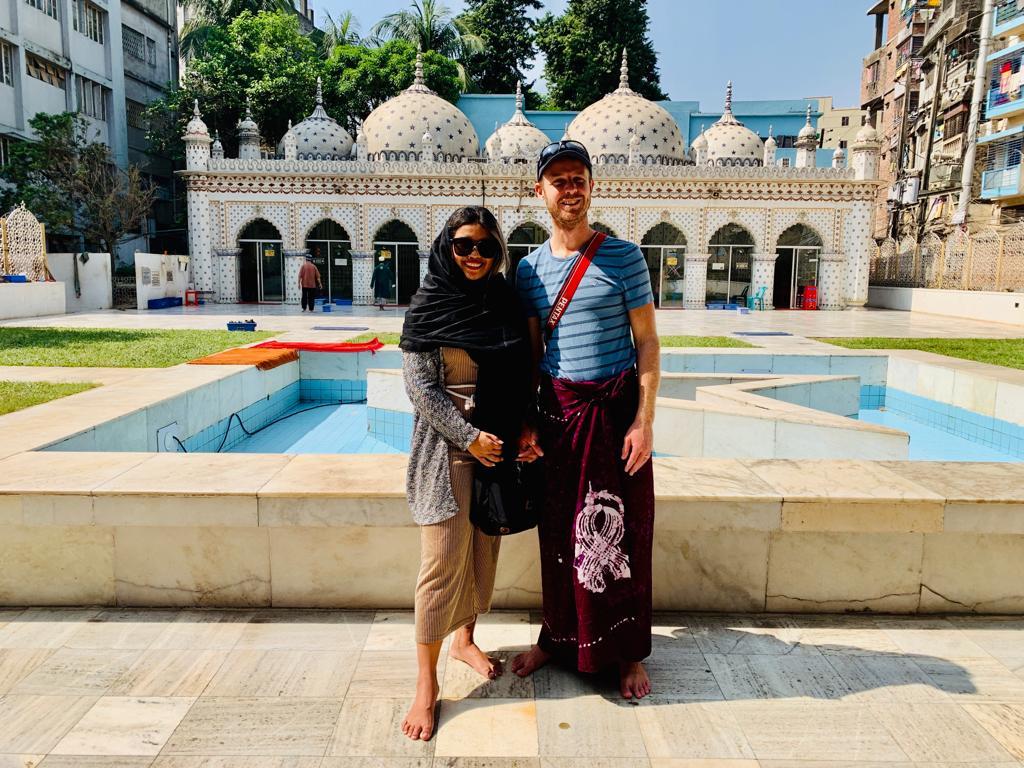 Bangladesh is a majority Muslim country, so there are many beautiful mosques, both historic and modern. One of these is the tiny Goaldi Mosque located in the historic capital city of Sonargaon.

There was a strong Armenian and Orthodox Christian presence in Bangladesh for centuries and you can still visit the Armenian Church in Dhaka, including many graves dating back hundreds of years. 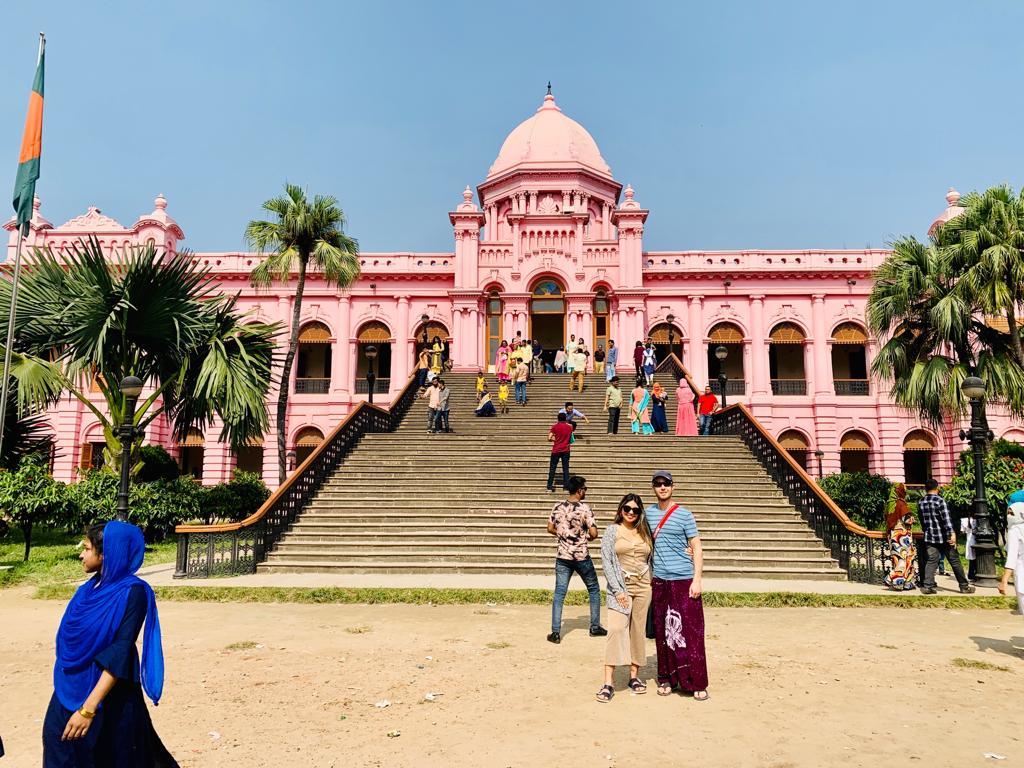 Ahsan Manzil is known as the “Pink Palace” due to the color of the building material. It was the home of the Nawab of Dhaka from 1872 and now it is a beautiful museum that you can explore.

5. Ride in a Traditional Paddle Boat

This will be the highlight of your Bangladesh adventures, as you navigate the river in a hand-paddled wooden boat, surrounded by boat traffic of all kinds!

Not only can it be extremely hot in Dhaka, but it is also necessary for men to cover their legs entirely to enter the mosques. A traditional “lunghi” is the perfect solution, covering the legs while providing welcome ventilation down below! 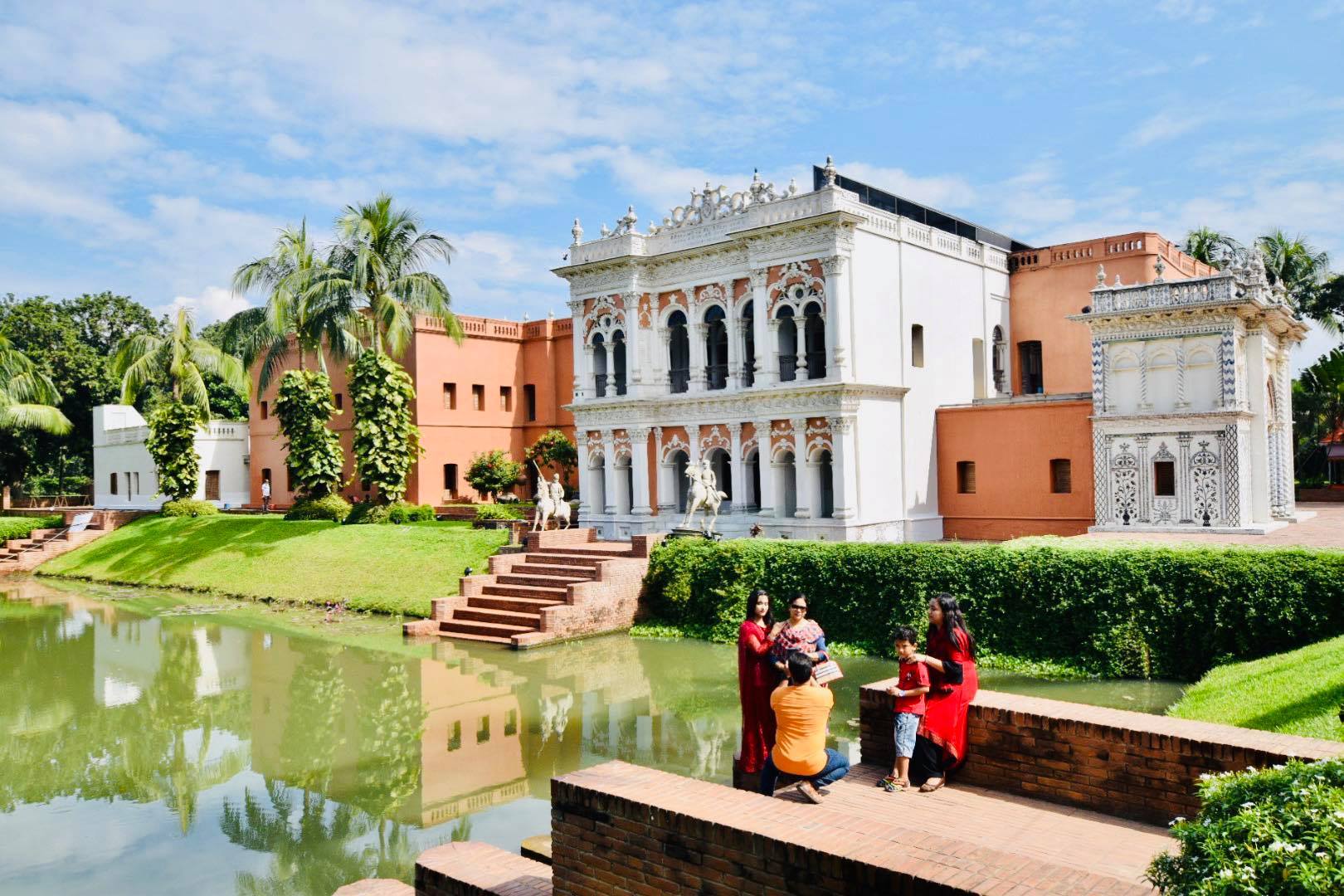 Before the founding of the capital city of Dhaka, Sonargaon was the principal seat of power for the country. Nowadays it is a quiet escape from the busy city with historic reminders of its prominent past. 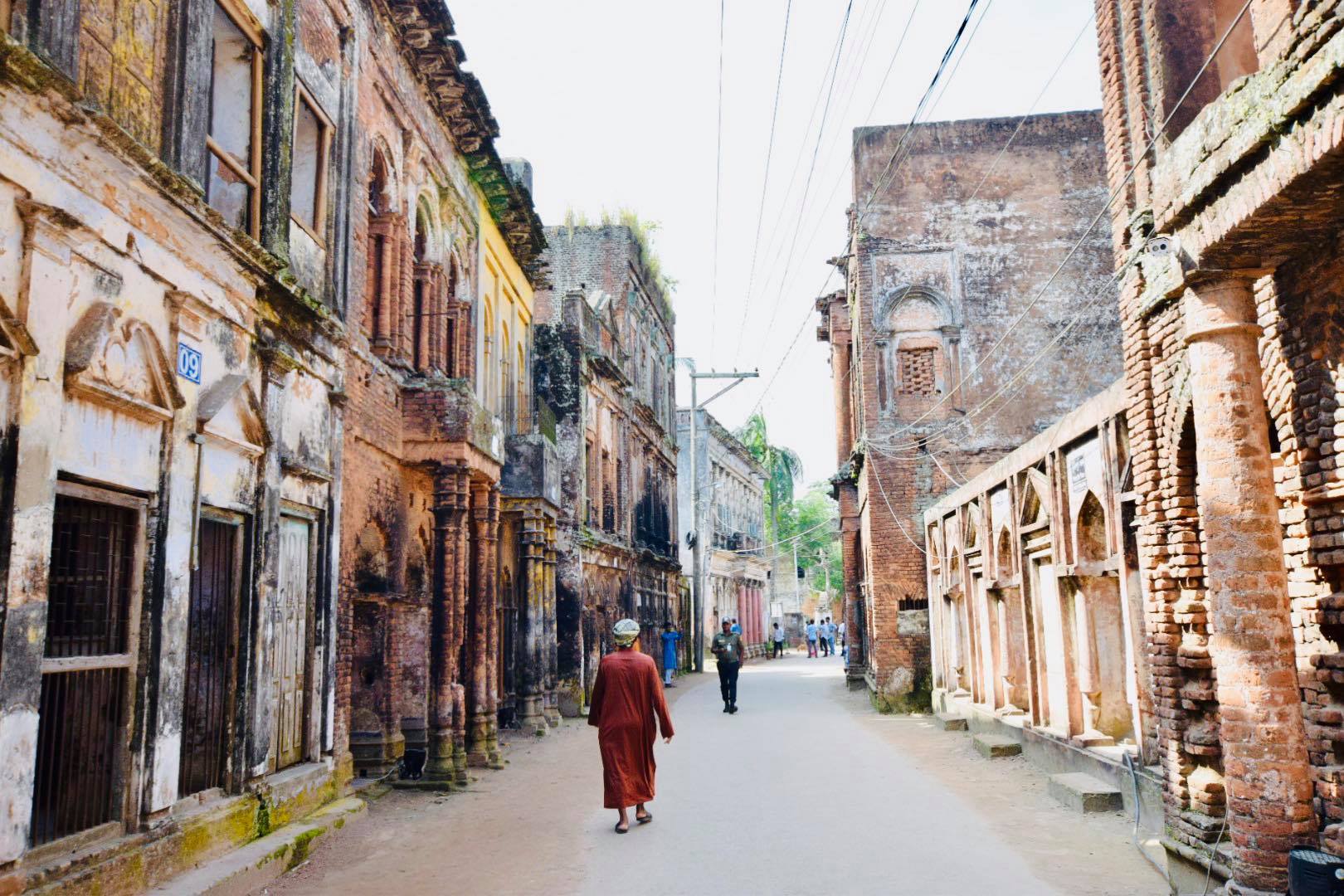 Like a Bangladeshi ghost town, this single street of wealthy colonial homes has long been abandoned by Indian Hindu landowners.

9. Take a Boat Trip on the River Meghna 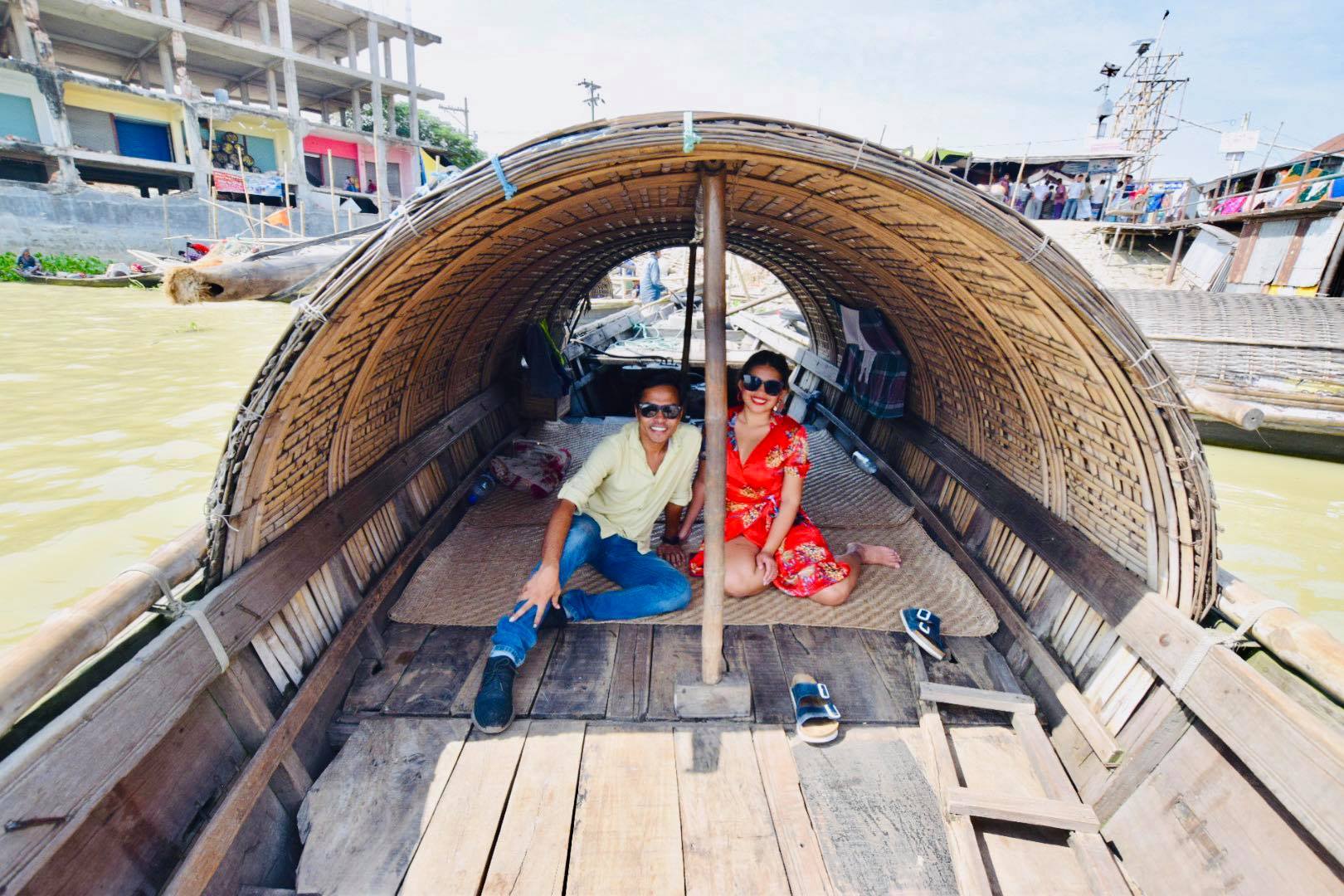 Not just another boat trip, this time ride on the vast River Meghna by motorized boat surrounded by vegetation and fields on both sides. If you’re lucky your guide will find some interesting stops where you could see local activities like brick production, or sand dredging!

This mini-Taj is a big attraction for locals who come visit picnic in the gardens, enjoy the fresh air, or even for weddings and family events!

Now that you know a bit more about what to see and do in Dhaka, Bangladesh, here’s a closer look at our own 2 days Dhaka tour with Deshghuri tour company!

We stayed in Dhaka for 4 days but spent the 2 days exploring on our own and the other 2 days of full day tours.

Day One in Dhaka, Bangladesh

Shabbir from Deshghuri picked us up with a car and driver from the hotel at around 9 am and wasted no time in diving headlong into the frenzy that is Dhaka City! 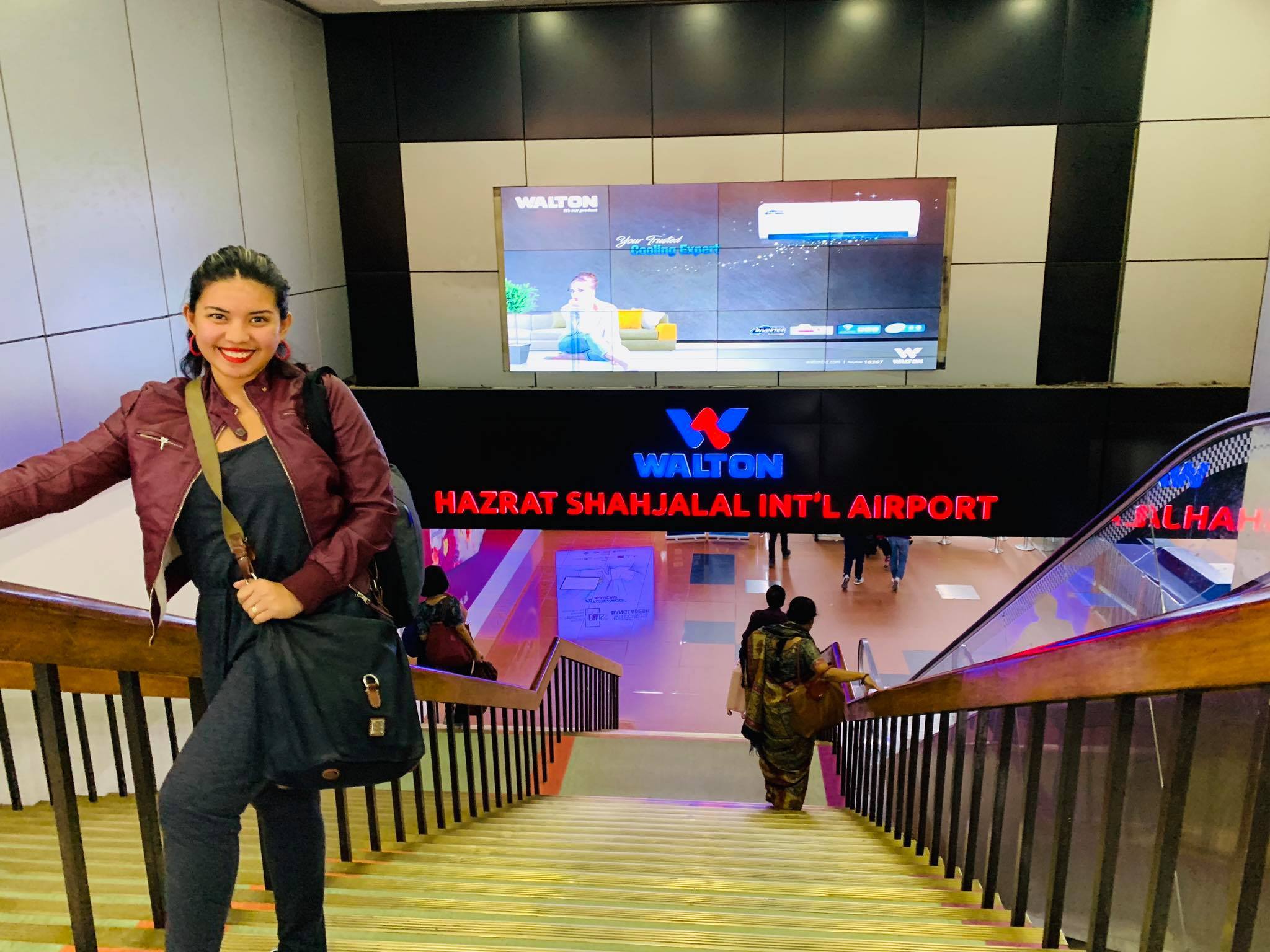 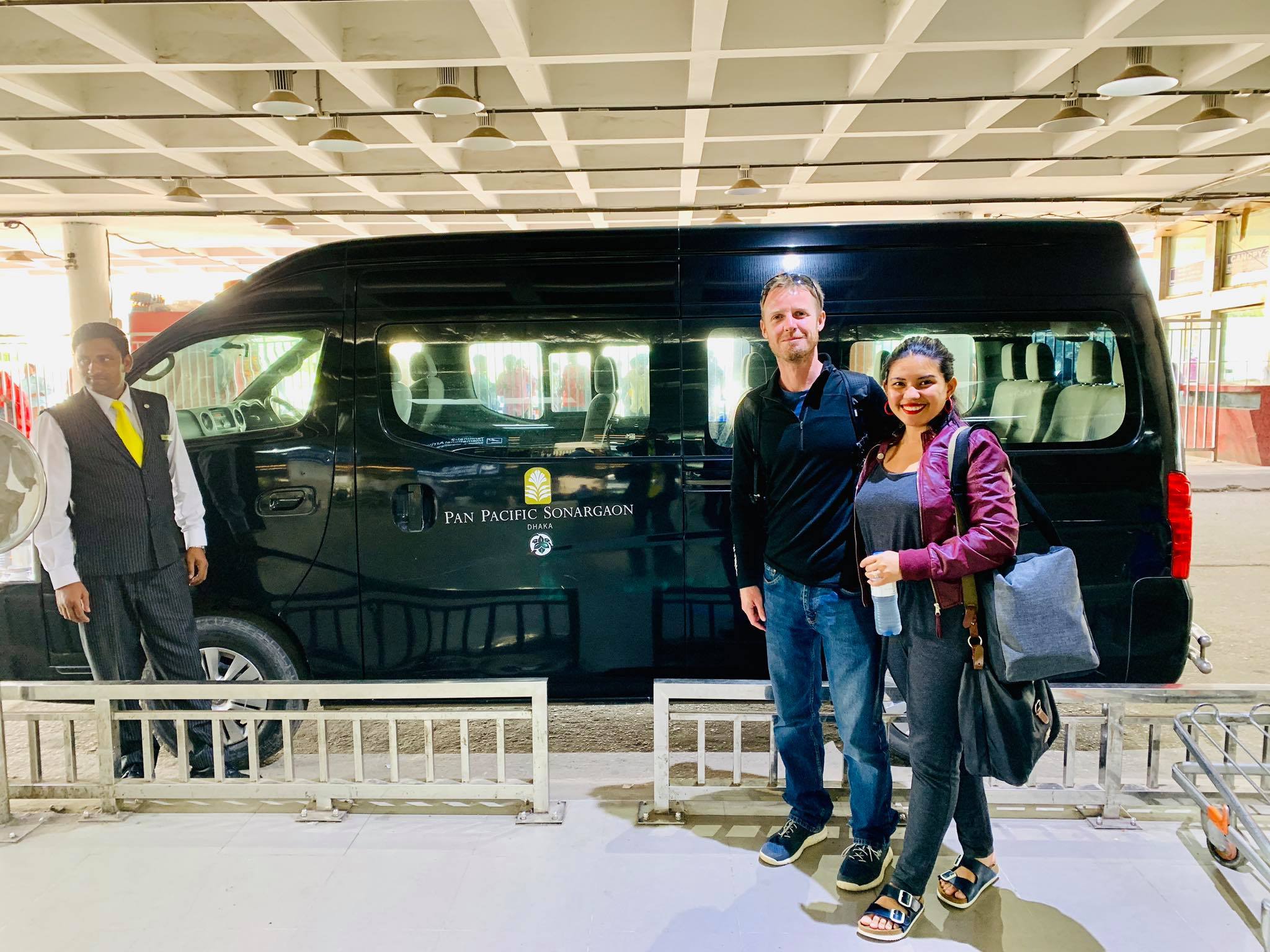 We got out of the car at the entrance to a small side street, only big enough for pedestrians, rickshaws, and tug-tuks. We walked for a while, dodging puddles, steps and the constant weaving traffic.

It was quickly clear that being in one of those vehicles was going to be a lot easier and faster than walking! Shabbir flagged down a rickshaw which was peddled by strong, wiry Bangladeshi man. 3 of us managed to climb on, which seems quite normal here. The driver pulled us through the narrow streets, skilfully avoiding obstacles and potholes.

There are literally thousands of rickshaws carrying people all over the city, almost all of the pedal-powered. We have no doubt whatsoever that these guys are some of the hardest working people in the city. Part of us felt guilty for even being on the rickshaw, but then this is his business, just like thousands of others.

The ride itself was a lot of fun, as being up higher allowed us to see everything going on all around us, like moving spectators!

Throughout the day we visited so many places that we never would have seen on our own, like a beautiful mosaic-tiled mosque, an Armenian church, the Pink Palace, Lalbug Fort, Dhaka University, Dhakeswari Temple, Sadarghat (the river), Banga Bazaar, New Market and loads more in between!

One of the biggest highlights was riding on a traditional paddle boat across the river and back, crossing the heavy boat traffic. To us, it felt like we might hit another boat and capsize, but to our boatman and guide, it was just another day on the river!

We even managed to go shopping for branded clothes like Zara and Mango and all of a sudden a tiny man appeared and started calling me in Tagalog! Apparently lots of Filipino flight crew come here to buy clothes, so the local guys in the stores have learned to speak Tagalog. I was able to get some amazing deals and haggling with them was loads of fun as well!

Of course, I can’t forget Jonathan wearing a traditional Bangladeshi “lunghi” ( a sarong-like piece of clothing for men) to enter the mosque, then liking it so much he kept it on for most of the day!

On the second day of our 2-day tour in Bangladesh, we left the hotel early to get out of the city and see the countryside.

It took a while to get out of the city with the morning traffic but after about an hour or so we arrived at Sonargaon, the historic capital of Bangladesh before the development of Dhaka city. We stopped first at the small Goaldi Mosque, more than 500 years old and built using small red bricks. It’s an amazingly well-preserved building.

Our next stop was the Sonargaon Museum of Folk Art and Crafts which was formerly the Shadar Bari, a palace of a wealthy Hindu landowner before they fled during the separation. All the old parts of daily life from that time are on display and it’s really interesting to see how people lived including the clothes and jewelry they wore.

After that, we saw the old Panam City, a single street of wealthy colonial-era homes, also leftover from the wealthy landowners who fled to India. After that, the local farmers who they had oppressed for so long took them over and destroyed many of them. Most of them are in ruins although the government is starting to restore several of the buildings.

Once again, the biggest highlight of our day was a boat trip on the river! This time it was the River Meghna and the boat had an engine. The river was much wider here and surrounded by fields instead of buildings. We traveled about 20 minutes to an open-air brick factory on the shoreline.

As we approached we saw a line of workers carrying piles of bricks on their heads across a flexing plank onto another boat. I still can’t risk slipping off something with my ankle, so Jonathan went ashore to meet the workers, see how they make the bricks by hand and have some tea with them. It still amazes us how hard people work here to make a living and how we often take for granted the life that we have. Having said that, every person there had the biggest smile on their faces and asked to have their picture taken doing their work!

From here we took the boat back to shore and went to a local roadside restaurant for some local Bangladeshi lunch. It was a very filling selection of simple curries and rice, but really tasty and just the right amount of spicy!

Our last stop before driving home was a quirky scaled-down replica of the Taj Mahal, which has become a tourist attraction for locals and even a popular wedding venue. It was a perfect example of ‘if you build it they will come!’ 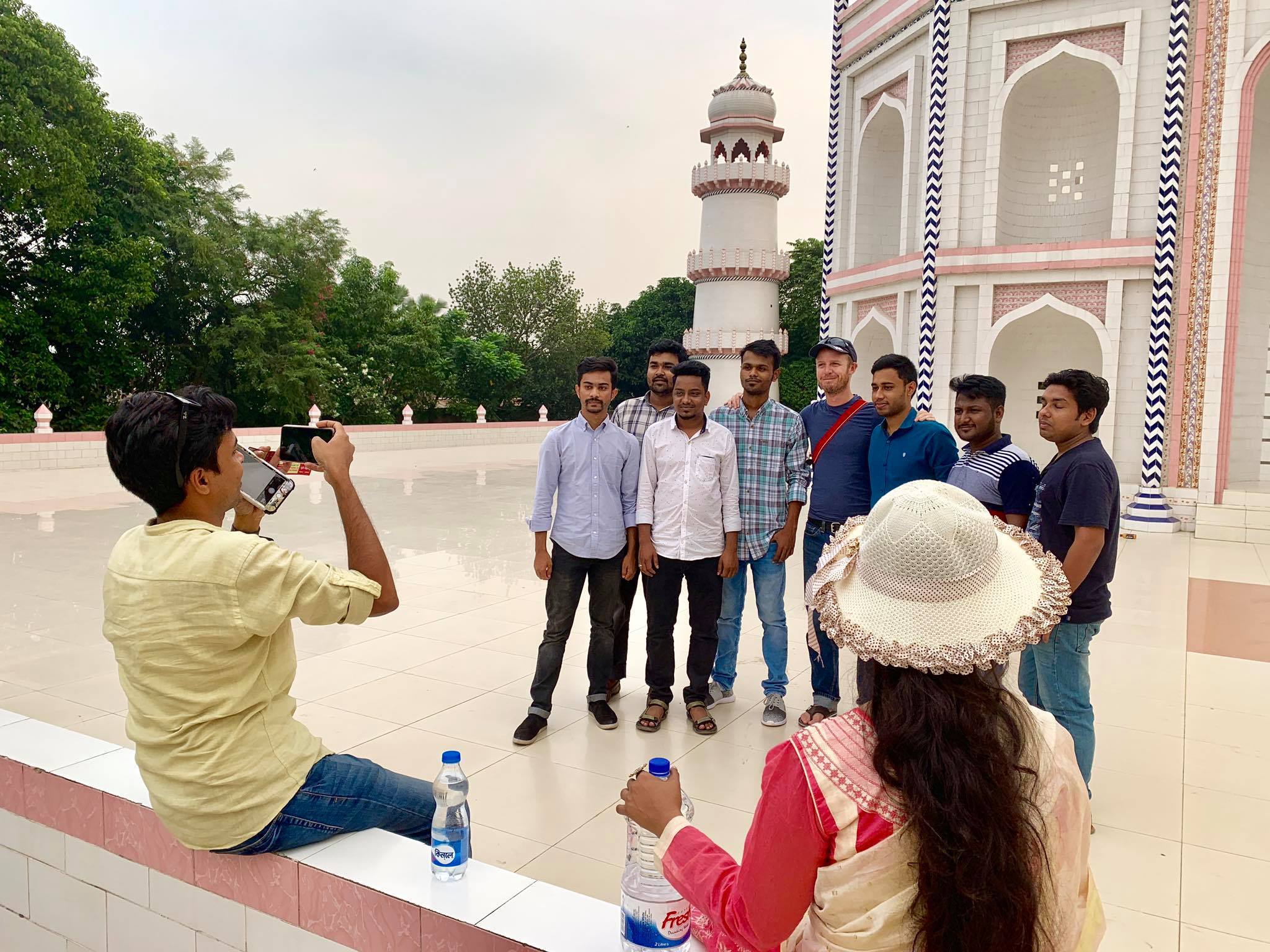 The long drive back to the hotel through rush hour traffic was more like a chance to relax, if not for the driver!

We had an amazing time with our guide Shabbir and we experienced so much more of Bangladesh in two days than we could have seen in a week on our own. There’s still so much more to this incredible country to see, so we’ll have to come back again!

One thought on “The Best Things to do in Dhaka, Bangladesh and Our 2 Day Tour Itinerary with Deshghuri Tours”

Bank Transfer Tips: What to Know When You Transfer Money from One Bank to Another

7 Things to Do in Sofia, Bulgaria