Home » Travel Blog » Moving In With The New Toyota Tundra

Jonathan and I are NPAs. It’s a Filipino slang which means: No Permanent Address. We keep on moving from one place to another so we don’t find the need to have our own place. But after getting married, we realized that we need to settle down and have a place of our own, but we also still want to move around too. 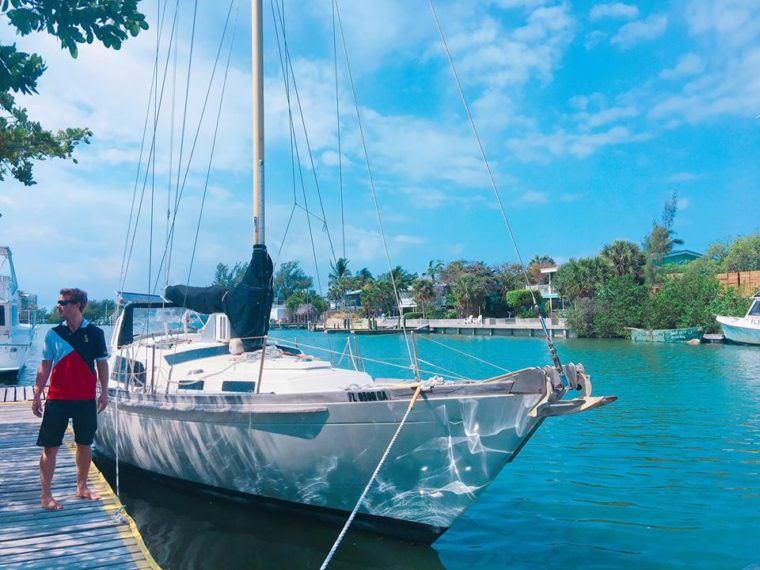 Jonathan’s dream is to live on a sailboat. So we thought it would be perfect to just buy a floating home and sail around the world when we feel like it! So after buying S/V Empress, we  finally have a place that we can call home. Dreams do come true, indeed ❤ 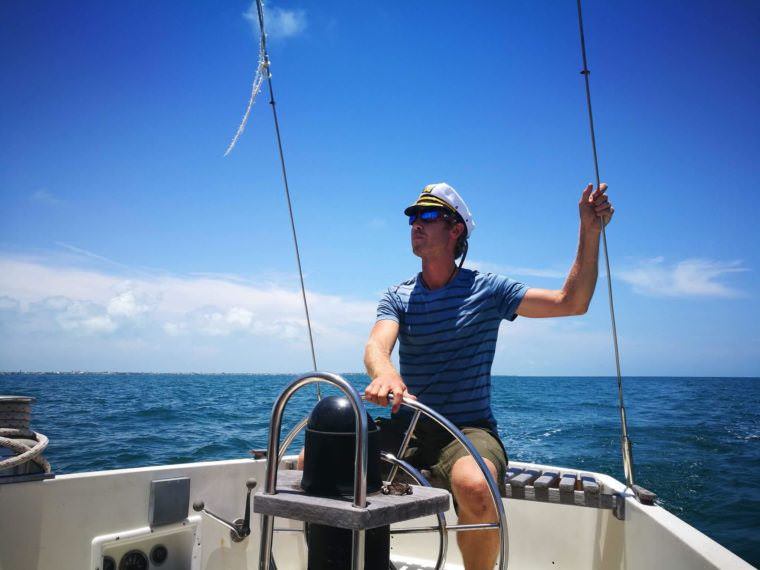 Settling down is not an easy task, especially with the crazy temperature around the Florida Keys. We need to go from one place to another to move things and squeeze in some tours in between. I have visited the oldest cigar factory which originated in Cuba. As some of you know, Key West is the southernmost tip of North America and it’s actually nearer to Cuba than to mainland Florida! Their story about finding and building their life in the Key West is just fascinating. I also went to a rum distillery and tasted the best rum I have found yet! 🙂 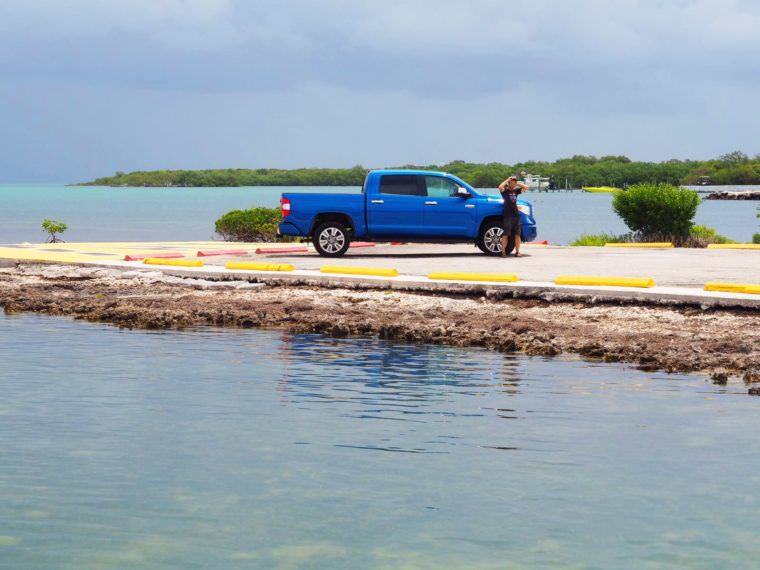 It’s a very good thing we had a Toyota Tundra Force V8 Platinum, because it made settling down and moving around a lot easier! 🙂 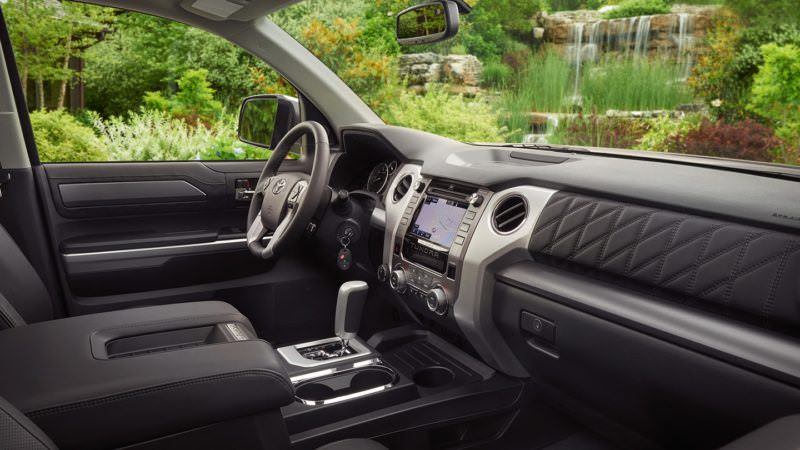 Jonathan was smitten the first time he saw the Toyota Tundra. It is very masculine and it looks like it’s always ready to be driven anywhere – whether it be through the storm or the desert. Since it’s a Toyota, we all know it is durable and reliable. 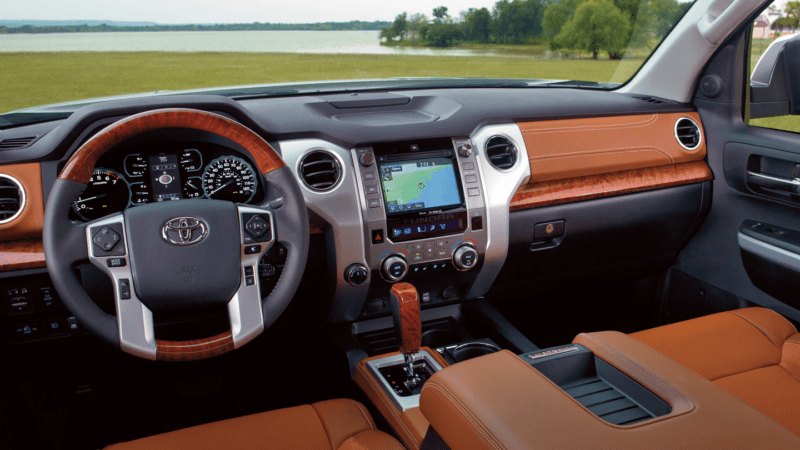 The cabin is huge and there’s plenty of leg space which is perfect for long drives. The space on the passenger seat is huge enough for me to work on things with my laptop without having to feel uncomfortable. The seats are big and comfortable (Finally! A decent space for my bag cos I always have one. And we don’t like seeing it on the floor. Don’t we, girls?). Just by looking at it, I can tell that the materials used all over are premium. It has a nice texture too that makes cleaning a breeze. As if the storage space at the back of the truck is not enough, the fold-up rear seats in the double cab create so much use for the cabin space which was really perfect for us, especially since we were loading a lot of things. 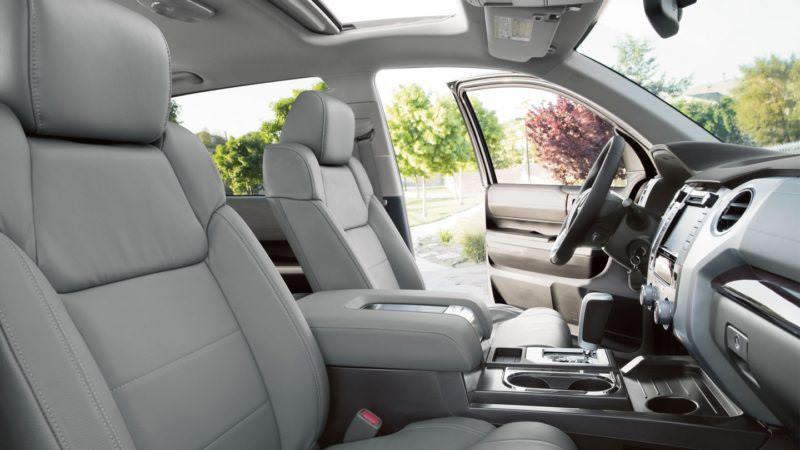 The sound, the air conditioning and heating are impeccable. The Multi-Information display LCD can be found right in front of the driver with details like the odometer, trip meter, distance to empty, average speed, trip timer, and the Integrated Trail Brake Monitoring Screen. 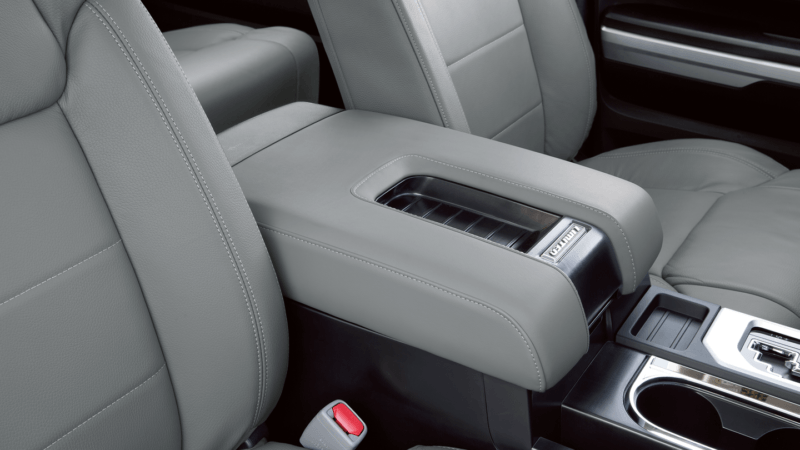 The Tundra is styled in California and Michigan, having in mind American consumers since the beginning. No wonder it looks really tough. 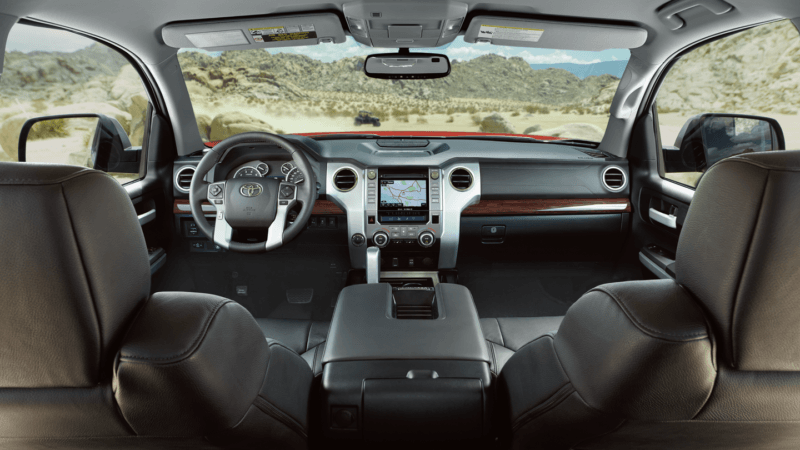 Our drive with the Toyota Tundra was smooth and excellent. The engine is definitely a monster worthy of a pick-up truck. There was no noise, whether it be from the outside or from the engine – and we absolutely love it. It’s perfect for doing our live videos. Haha! 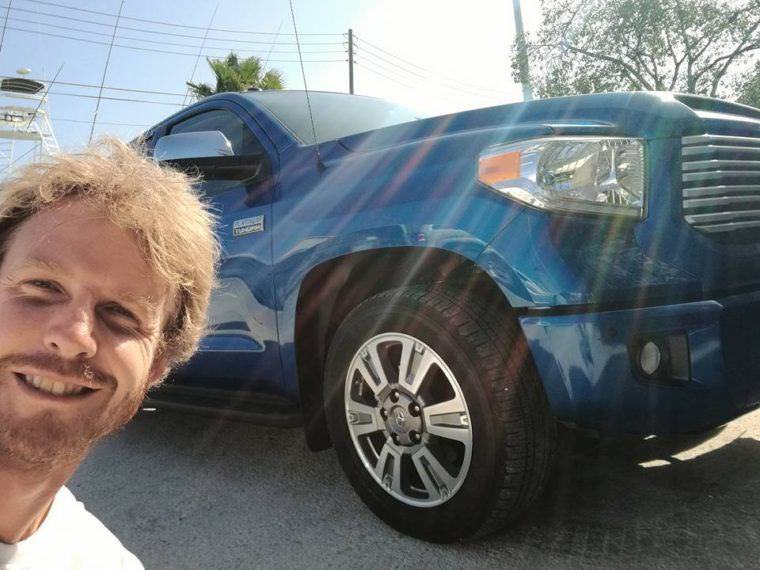 The steering wheel is also light for a pick-up truck and the 6-speed transmission makes the journey even faster. The brakes are powerful, equipped with 4-piston brake calipers. It has a massive ring gear. Standard on all Tundras is the Automatic Limited-Slip Differential – it applies brakes to wheels individually when they lose traction.

More than the style, safety is Toyota’s priority. Toyota Safety Sense is a comprehensive active safety package which is designed to support awareness and decision-making on the road. The Tundra is designed with a Pre-Collision System with Pedestrian Detection, Lane Departure Alert, Automatic High Beams, and a Dynamic Radar Cruise Control. We didn’t have to worry much about driving late at night. Tundra got our backs! 🙂 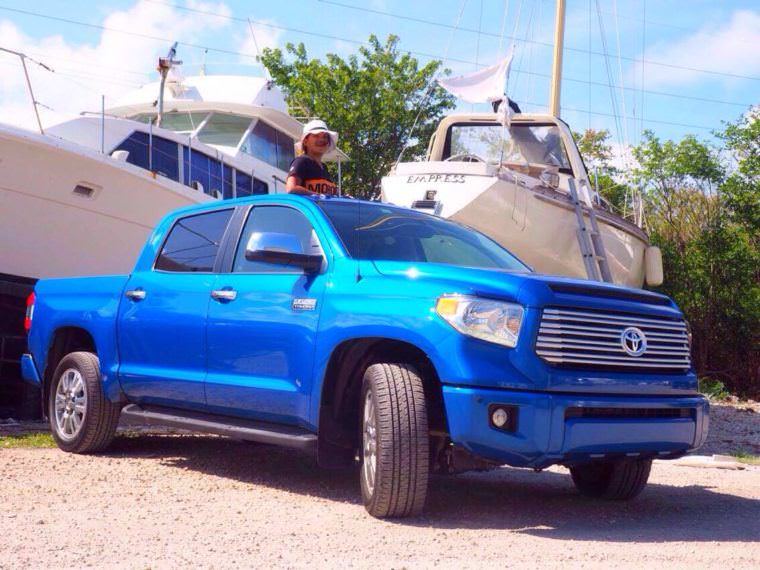 It also features a Star Safety System, six advanced safety features can be found in every Tundra. This includes: Vehicle Standard Control (VSC), Traction Control (TRAC), Anti-Lock Brake System (ABS), Electronic Brake-Force Distribution, Break Assist (BA) and Smart Stop Technology (SST). Airbags – not just two, but eight of them! So with all these safety features, we didn’t have to worry much whether we were driving in broad daylight or at night.

Now this is where we are really impressed. 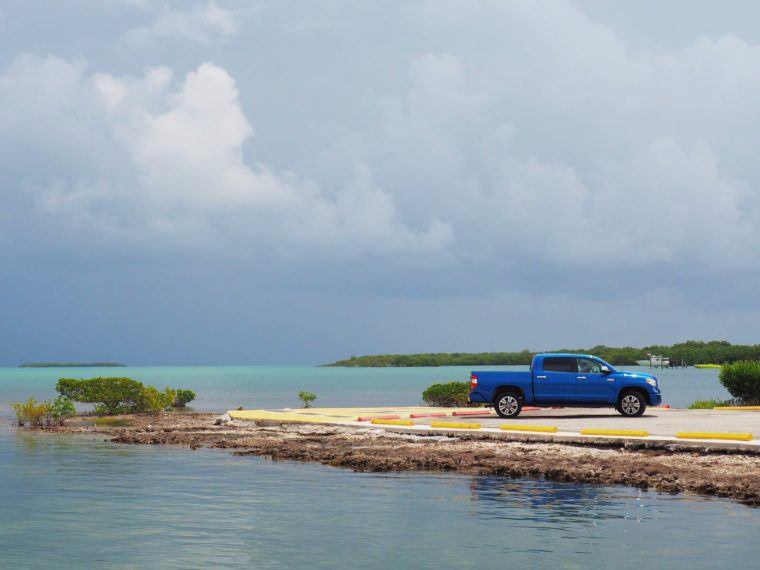 Settling down doesn’t only mean moving our personal belongings. The Toyota Tundra has 10,200-lb towing capacity, which is impressive!The Tundra has a Tow/Haul mode, 4-/7- Pin Corrector, and Integrated Trailer Brake Controller/Trailer-Sway Control. Unfortunately, S/V Empress weighs in at 17,000 lbs so were weren’t going to be towing it around. We could get all of our stuff into it though, which was a whole apartment worth of belonging and some heavy stuff, like a 65lb storm anchor! 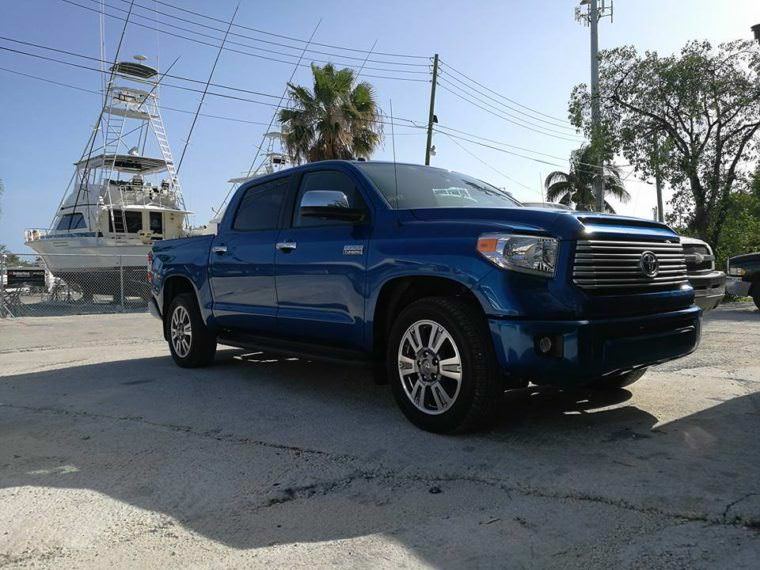 It is also equipped with a Standard Wide Angle Backup Camera so if you are towing something, you have a full rear view of whatever is going on.

When it comes to cars, Toyota has certainly built its name to fame through the years. Toyota’s name and great reputation is one of its biggest selling points. With Toyota, every unit of Tundra is dependable and durable. It can last a lifetime is you take care of it! 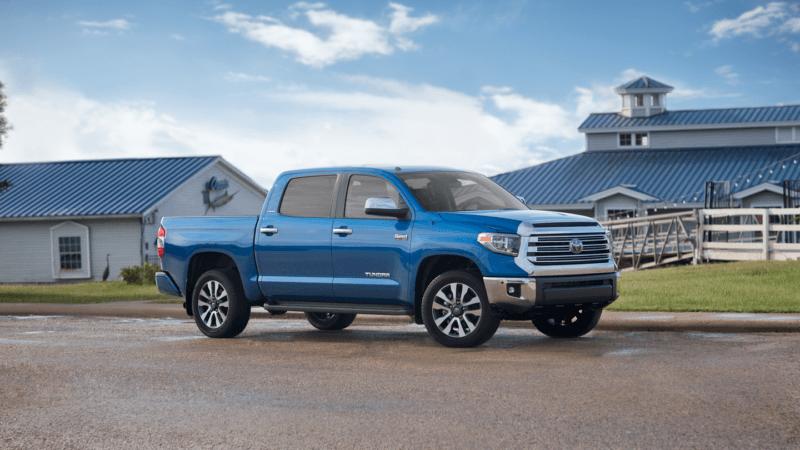 Finally, we were able to settle down in the Florida Keys with ease! We now have a place we can call our very own. I am proud to say that we were NPAs! It felt like a dream up until now. Haha. Thank you, Toyota! ❤

The vehicle was provided to us free of charge to review by Toyota. However, all opinions and ideas are our own!

CAR RENTAL TIP: We always try to rent our own car when we travel, so that we can explore off-the-beaten-path places on our own schedule. Check out the best deals on rental cars for your trip and explore your independence! Check cheap prices here, now!

How to Apply for Philippines Passport in DFA? Requirements & DFA Appointment Step by Step Guide

Roadtrip Around Florida Keys With The Volvo S90 T6 Inscription